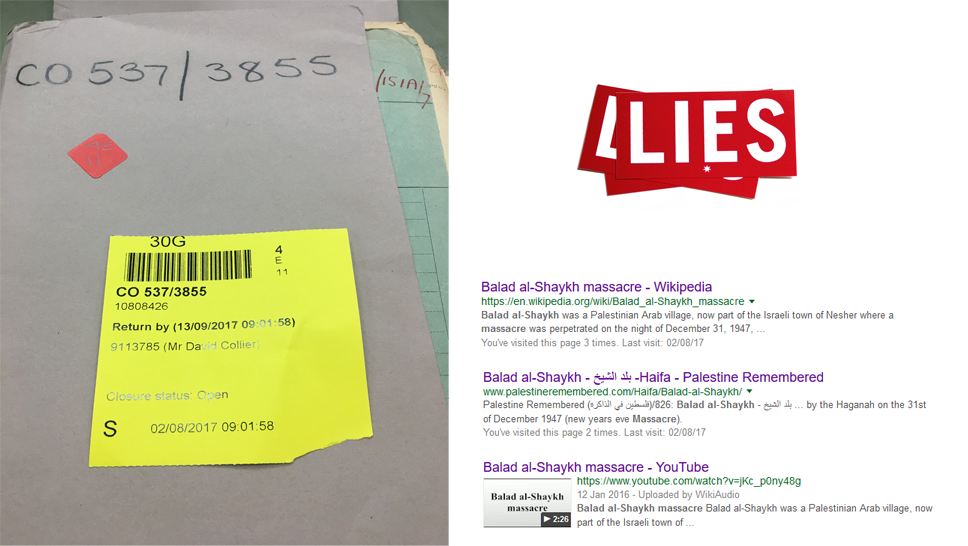 The myth of Balad al-Shaykh. A massacre that never happened

This is the story of how a small engagement at Balad al-Shaykh, at the start of the 1947/1948 civil war in the British Mandate of Palestine, became the story of a full blown massacre with its own wiki page. I have uncovered documents that reveal the Balad al-Shaykh massacre is little more than part of the bubble of anti-Israel distortion. Here is the report:

It was new years eve, 1947. Both Jews and Arabs in the British Mandate of Palestine had been suffering from widespread violence since the passing of UN resolution 181 on 29th November. The Jews had accepted the partition plan, the Arabs had responded with violence, and civil war between the two sides had erupted.

With the British due to leave in only a few months, and with the neighbouring Arab states threatening to destroy any Jewish attempts to declare independence, the situation was becoming increasingly bloody and desperate.

On 30th December the Irgun attacked the Haifa oil refinery with grenades. Six Arab workers were killed in the attack. In an immediate response the Arabs at the refinery gathered together and began a massacre of Jewish co-workers.  In total thirty-nine Jews were killed. This attack is referred to as the ‘Haifa Oil Refinery Massacre‘,  (included in that wiki page are references to the ‘Balad al-Shaykh massacre’).

The Haganah wanted to respond, and do so quickly. Balad al-Shaykh was a local town where many of the refinery workers lived. Including some ‘allegedly involved’ in the massacre. For this reason it was chosen as a target. To extract revenge, the ‘units orders’ were to ‘kill as many men as possible’. (Morris, 1948 pp103. 2008. Yale University Press).

Using historical Haganah records and the research of Uri Milstein, Benny Morris put together an account that was unable to accurately specify casualty numbers from the attack. Needing to rely on separate accounts that didn’t agree with each other, Morris was left to conclude in Birth Revisited (see page 101 of book, page 124 in PDF) that anywhere between twenty-one and seventy died.

When anti-Zionists are given a choice between two conflicting numbers, they will always choose the higher number. Ilan Pappe, who quotes Morris & Milstein as the source, simply says ‘over 60 died’ (Pappe, Ethnic Cleansing, pp59. 2006. One World). As Pappe has no other source listed, his use of ’60+’ highlights perfectly, the sort of shoddy, agenda driven, propaganda, that he produces and calls ‘history’. Thus a massacre of 60-70 people, is etched in our history books. Propaganda sites such as ‘Palestineremembered’, call it  “a new years eve Massacre”.  It is now firmly part of the bubble called ‘Nakba’.

Although this is the way history has recorded the Balad al-Shaykh ‘massacre’. The idea of the Palmach units going from house to house and executing dozens of people is a complete fabrication. Here is what really occurred:

For reasons I cannot currently mention, I have spent several days at the National Archives in Kew. As part of my research, I stumbled across files relating to events of 31st December 1947, most specifically at Balad al-Shaykh.

File WO 275/67 is a War Office file reporting incidents from Jan-June 1948. Inside was a report on the incident. Unlike Morris, this report comes with information from the Arab side. 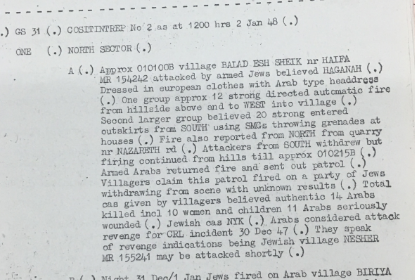 Fourteen dead, 10 of these women and children. 11 seriously wounded. To uncover the real truth, we now need to combine the two reports and to look at motives.

Haganah – If the Haganah had come under fire, and if they had been forced to withdraw, then the disparity between the different reports Morris encountered begins to make sense. They had been involved in a firefight and had no way of knowing how high the casualty count was. Different groups, different estimates. The Arab resistance would also explain the Jewish casualties (three dead, two wounded). Given the orders were to inflict casualties and with the high sense of anger over the events at the refinery, it is no surprise the Jewish fighters may have overstated the success of their mission. As the low estimate was twenty-one, even this may have been an exaggeration.

Arabs – the villagers acknowledged the attack was probably in revenge for the events at the refinery. The casualty count is described as authentic. Whilst the Arabs may have had reason to overstate their own defence, they would also have had motive to exaggerate the number of women and children casualties.  A usual and predictable strategy in this type of circumstance. The four men plus ten women and children figure therefore becomes suspect. However if two or three of the critically injured died overnight, then we would reach seventeen casualties, the number of fatalities recorded in the article in the Times (and mentioned in the wiki page). It is this account therefore that seems the source of the initial media reports.

Whilst digging for more information on this, I then came across reports from the Criminal Investigation Department (CID), in file CO 537/3855.

However, the Criminal Investigation Unit (CID) had clearly been on the scene, or in touch with those dealing with the fallout. The file, not only ran a report on the event, it actually named the victims. All five of them. Just like the Arab report but without the exaggerated ‘women and children’ section. This perhaps explains the difference between the CID report and the seventeen casualty figure that made the Times newspaper.

The CID report did not just name the five victims at Balad al-Shaykh, it also named all of those injured. With their ages. This is clearly a document with superior detail and an access to information not available to the sources Morris cites. Then, to reinforce the integrity and accuracy of this particular account, over the next two days, it added to the list of victims, as four of the seriously wounded, succumbed to their injuries. Another four names. Bringing the total fatality count to nine.

As evidence, copies of all of the documents referenced in this report have been uploaded to this site. You can view them here:

These are the names of the nine fatalities from the Balad al-Shaykh attack.

There were thirty people injured. The vast majority (about 25) male.  Five of the injured were children. The male majority providing an indication of what actually happened. A mix of the two accounts. With a casualty figure stripped of the exaggeration of both sides. The Jews attempted a revenge attack for the events of the refinery, they were met with stiffer than expected resistance, they were forced to withdraw. Final fatality count. Nine Arabs, Three Jews.

This is how the Nakba myth is developed and propagated by sloppy historian activists who do not seem to care about the truth at all. An overestimate of twenty-one, became a massacre of sixty plus. In reality the death toll was probably nine. And all the while a file containing the truth was waiting to be uncovered in Kew.

As usual, this website conducts intensive research and fights to expose the truth. It is time to put the lie about Balad al-Shaykh to bed.

Please if you can, consider making a donation to help with the fight. Every amount is welcome. I believe that attacking the lies and distortion is vital. We need to be there to expose it. We need to research the facts to tell the truth. Even producing just one of theseh piece does take days, sometimes weeks (or months!), and whilst I do what I can, there are serious constraints that impact on what is possible. Your assistance can and does make a difference. Every contribution is greatly appreciated.

You can use the donate button above. Or I have opened a fundraising page on Jewcer and you can donate from there.

29 thoughts on “The myth of Balad al-Shaykh. A massacre that never happened”