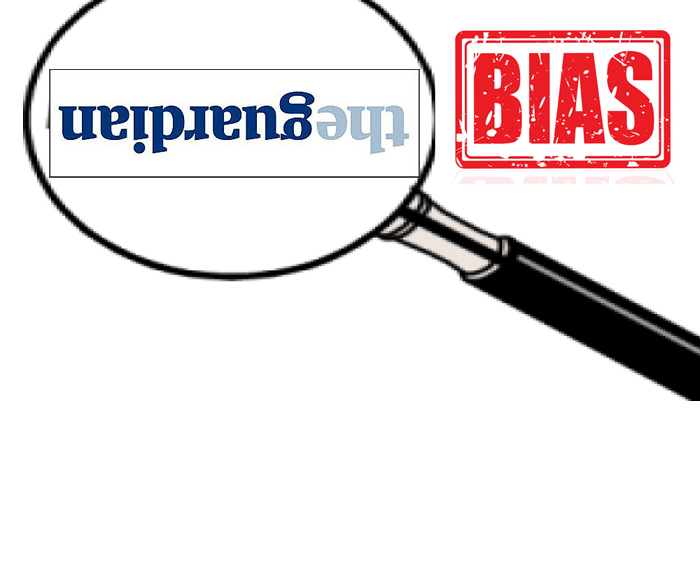 The Guardian – anti-Israel bias, more obsessive and vindictive than you think

Over recent months I have been dealing a lot with issues of bias, chiefly because of the soon-to-be-published report into Amnesty International. The report itself is done. It is 227 pages long and has 650 references. The report touches on the bias of dozens of Amnesty staff, many of whom hold Director, Deputy Director or other management positions at the NGO. The report contains a lot more, but there will be no more spoilers from me. It is out of my hands now and being assessed by some NGO experts before it is published. This gave me some free time, so I thought I would relax and have some fun.

Most arguments of media bias occur over the language inside an article or headline. Even the way a sentence is structured can change its entire meaning. But this level of bias is also very hard to prove. Days of arguing can eventually be put down to an editorial mistake or oversight. I always prefer looking at the big picture, where signs of an institutional bias tend to both far more visible and much harder to dismiss.

Take the Guardian newspaper. A media outlet well known for having anti-Israel obsessions. Just recently I wrote a piece about how the paper likes to bait British Jews. What if we look at the paper from a wider angle?

A simple test. The website has a search function. All things being equal, the number of returns that nations receive should ‘rank’ them in order of relevance and importance. False positives should equal out. And it seems to work. Germany has 338k, France 225k, Russia 245k and the USA 302k. China gets 286k and New Zealand 90k. The UK is an important global power situated in Europe and with deep connections to the Commonwealth. These results appear to include every reference to those nations, so we can assume New Zealand’s 90k has a fair few rugby and cricket references included.

How about Israel? Not in the commonwealth, nor in Europe. Israel receives 101k. What can we compare Israel with? Geographically, Syria for a start. A nation that has seen 500k deaths – 94k. Saudi, the Arabian Kingdom that controls so much of the world’s oil? 63k. What about Lebanon – 21k. For a regional power, how about Pakistan, a nation in the commonwealth that also plays cricket. 79k. What is most interesting about Pakistan is that unlike Israel, it really is a brutal oppressor of human rights. Yet only 79k hits, including of course ‘x’ amount of cricket scores.

A few more. Bangladesh 26k.  Turkey? Erdogan’s Turkey only gets 81k, and that probably includes Christmas recipes along with all those holiday recommendations in Antalya. How about Cyprus, an invaded and occupied Island? 18K. Lesser nations in Europe? Sweden 59k, Romania 22k and Poland 41k. I looked at the eight bloodiest conflicts of the 21st century. Syria (94k) I already mentioned. There is also Congo (21k), Darfur (6k) Afghanistan (79k), Yemen (20k) and Ukraine (45k). Only Iraq, a war that actually involved the UK for years, scores more highly than Israel. Fun stuff huh?

It gets really silly. ‘Palestinian’ gets 60k results. 300% more than Lebanon. Kurds only get 17k. Perhaps if even more of the Kurds had been killed through Genocide, they may have made 20k, but it does seem as if the Kurds have to make Israel their enemy for the Guardian to really take any notice. ‘Palestine’ gets a whopping 50k, which is 10x the number of references to Kurdistan. In fact, ‘Palestine’ gets more mentions than the illegal occupation of Cyprus and the bloody conflicts of Lebanon combined. Think about it. On what planet can ‘Palestinian’ return as many results as the Saudi Arabian Kingdom that controls so much of the world’s oil? Perhaps it is a good thing that Palestinians don’t play much cricket.

Hamas, a terror organisation in a tiny regional spat in the Middle East gets 14k returns, which is more than Boko Haram (4k) and Al Qaeda (7k) combined. Guardian editors sure seem to have funny priorities.

An Israel obsession? Never mind. I am sure this is all just an editorial error.

A closer look at bias

One thing that was discovered during the Amnesty project was the big difference qualitative bias can make. A newspaper can write the same number of articles about two subjects, but the different approach the paper takes carries the real bias. An example. Take Israel and Saudi. Israel is a democracy; Saudi Arabia is not. Both nations are in conflict. Saudi’s conflict in Yemen is brutal. There are reported to have been 100k deaths since 2015. That is in the same ballpark as the total death toll of all the wars, on all sides, that Israel has ever been involved in.

Jerusalem is a diverse city, but Mecca isn’t. Mecca is a ‘Muslim only zone’ – if you are not Muslim, you are not allowed inside. So Saudi Arabia has real Apartheid too. Israel scores highly on women’s rights, gay rights, freedom of the press, access to legal systems and all the other variables relevant to free and liberal societies. Saudi does not. In fact, if you are critical of the Kingdom, it is advisable never to visit their embassy.

The Guardian tags articles and creates ‘country pages’ for them. This allows for a far more serious and accurate assessment. Israel’s pages have 17k results, Saudi Arabia has 4k. The ‘Palestinian territories’ pages gets 10k, as much as India (10k) and more than Pakistan (7k). It seems the actual obsession is worse than the simple keyword search originally indicated. The poor Kurds only get 1k. Some ‘national liberation movements’ appear to be 10x more important than others.

From Quantitative to Qualitative Bias

How about Pakistan? Israel’s recent monthly returns have been August – 37 articles, July -19 (it would be interesting to know who was on holiday), June – 31, May – 45 and April – 59 articles.  Pakistan was the subject of 27 articles in August, 16 in July, 14 in June, 13 in May and 12 in April. Even a potential bloody conflict over Kashmir in August couldn’t knock Israel out of its top spot. Total score: Israel 191: Pakistan 82.

Articles were then categorised. An article that was critical was counted as ‘negative’. A simple statement of fact was ‘neutral’. An article written attacking a second party was also ‘neutral’. A good news story was categorised as ‘positive’.

During August, not a single explicitly negative article was written about Pakistan. As was expected, the main focus was Kashmir. Almost all the articles were ‘negative’ about India. Three articles required closer attention. One was about China and the Uighurs, with Pakistan’s involvement incidental. Another simple stated as a  matter-of-fact that Pakistan had vowed to protect Kashmiris. The third about Pakistan’s intent to expel the Indian high commissioner.

In July there were articles that uncritically talk about Pakistan cracking down on ‘militants’. They have a story about Pakistan building a wall along a disputed international border to stop terrorist infiltrations. The journalist runs with the human angle of families that have been split by the wall. But there is nothing critical in the article of the policy. No call for the ICC to investigate it. No use of the word Apartheid. The wall is actually splitting ethnic Pashtun’s who now need a visa to visit family members who live in neighbouring villages. Kudos that the Guardian mentioned it at all, but it is more an indication in the different way Israel’s story is handled than anything else.

Most of the articles were about Donald Trump or regular non-relevant news stories.

The picture with Israel was somewhat different and the language changes dramatically. Just a few examples from Israel’s August pages:

All this means that the true level of obsessive bias is not immediately clear when you count the number of articles (191:82), in fact it is understated. Many of the references to other nations are neutral, positive or contextualised. The level of hate is certainly not as evident if you focus on the language used in a single article. Only when you draw comparisons in the way different nations are treated do you realise how unacceptable the situation with the Guardian’s treatment of Israel has become.

The Guardian are obsessed with Israel, that much was already clear. But the Guardian’s reporting on Israel also contains a vindictive hostility. An endless stream of negative articles, all carefully worded to present Israel as the most vile, oppressive, Muslim hating, Christian hating, gay hating, Palestinian hating, murderous nation on earth.  An ‘Apartheid state full of brutal bigots’. Compare that to the sensitive, contextualised reporting on Pakistan, one of the most oppressive nations on the planet, and you are left in a place without any rational or acceptable explanation.

Unlike a single article, persistent, vindictive bias cannot be hidden or edited out. The full truth is out there and a deeper look is certainly warranted. A far large comparative study is possible, that will draw in far more variables. Who is writing these articles for example? What about other nations in conflict? If you want to see a deeper study then think about dropping a small donation via the link below and helping to support this research. For those interested, the Amnesty report will hopefully be published in the next week.

4 thoughts on “The Guardian – anti-Israel bias, more obsessive and vindictive than you think”