The Amnesty report is not yet out and already Amnesty International have lost the input of a terrorist sympathiser. Yesterday, I released a teaser. The report is entering the final stage and is almost ready for final editing. With the information gathering stage behind me, I felt confident enough to release one item – about the true face of an Amnesty consultant in Gaza.

Hind Khoudary worked as an Amnesty Research Consultant in Gaza: 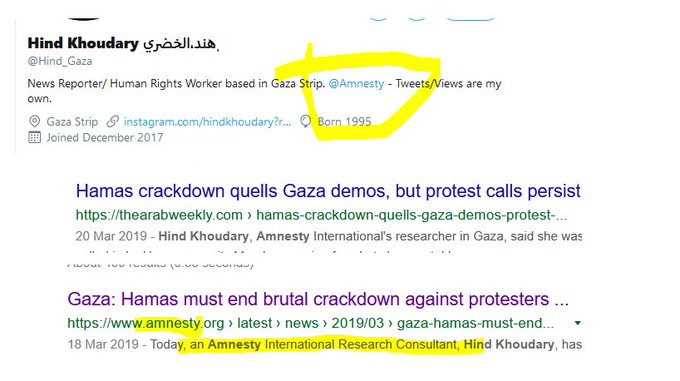 Since the regular violence erupted on the Gaza border again, Hind has been a popular ‘journalist’, used by different media outlets worldwide. Amnesty pushed their ‘consultant’ too, using iconic images of her to turn her into some type of hero: 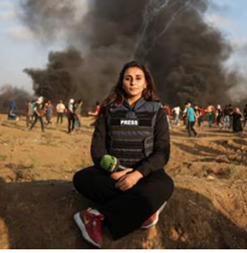 Like most propagandists her English output was always moderated, to show a ‘peaceful’ face to the west. She was also photogenic. Hind came across as a presentable, articulate, friendly, young, peace-seeking, progressive and is the type of ‘reporter’ western media outlets love. She spoke long and hard about the awful situation and how she just wants her ‘freedom’.

As is fitting of her role, she embellished her articles with endless tragic human-interest items which may or may not have been invented. When it came to the ‘Great March of Return’ Hind never saw a gun on the Hamas side. She spoke of the ‘tolerant’ Gazans who accept people who are different, reminding people that Palestinians are always so accommodating and peaceful. This balderdash has been swallowed whole by western media and Amnesty International are so embedded inside this false narrative, they regurgitated her poppycock verbatim.

Hind’s Arabic content was somewhat different. For example, she retweeted this which followed a thwarted terrorist attack. It talks about the Gazan casualties, but calls them ‘martyrs’. Notice the glorification of the violence. There is apparently nothing better than entering ‘paradise’ with machine guns: 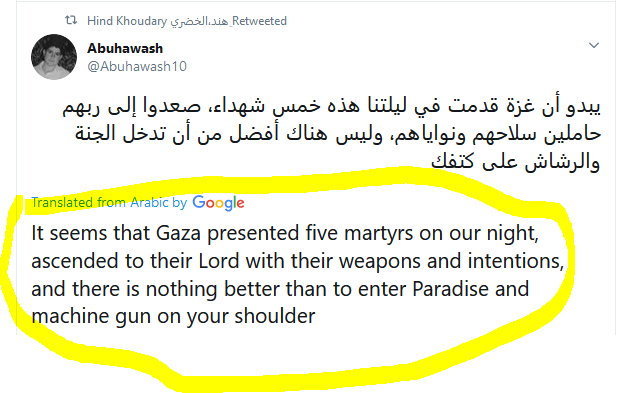 There was this one too, as she retweeted the video of the Hezbollah leader Nasrallah’s when he made a recent threat against Israel. The tweet carries comments about Nasrallah’s ‘promise’: 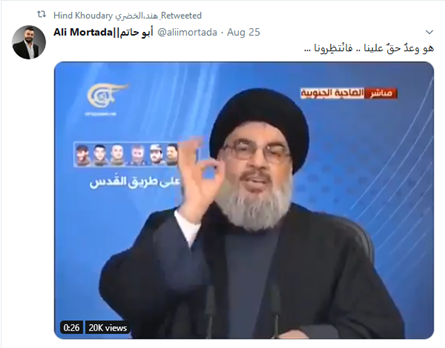 This one everyone should download or bookmark. Rarely do we catch the enemy with their trousers so far down. This is an instruction. The date is the 17th August. Violence has erupted and rockets are being fired at Israel. It tells bloggers and reporters to ‘self-censor’. To lie about the violence around them. To put Palestinian ‘national interest’ first and to make sure they are backing the ‘resistance’. In other words, to be propagandists. To hide the truth from the world and tell them whatever is necessary in the ‘national interest’. These people are not journalists, they are not reporters or human rights activists. They are Pallywood personified. 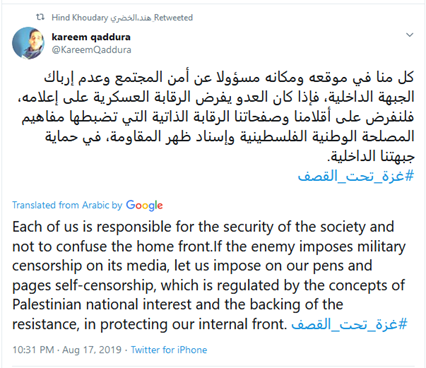 There is more. In a video interview in English, Hind is explicitly asked if she wants Israel ‘gone’. To which she replies ‘of course’. In the video Hind talks about how moderate and tolerant the people of Gaza are. When you remember she works in the ‘national interest’, all of the propaganda becomes clear.

And then there is this beauty. The post is about the death of two terrorists, Bilal al-Bana and Abdullah Abu al-Ata. B’tselem reports that both were engaged in hostilities (May 5) and both were members of the military wing of the Islamic Jihad. Not that there is any dispute, because the tweet mentions that too. It calls them ‘mujahideen’. Amnesty’s consultant calls these members of Islamic Jihad’s military wing ‘heroes’ and send them love hearts: 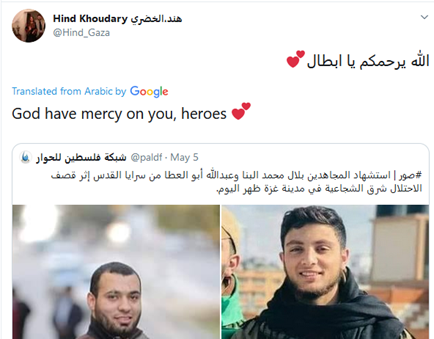 What we have here appears to be a terrorist loving propagandist who lies to protect the resistance. She tweets Nasrallah and dotes over Islamic Jihad terrorists. But she has also had input into Amnesty International. How much? Who knows? Just two days ago they produced yet another report on Israel. Is it any surprise? How much of Amnesty’s information is supplied by those like Hind? How much of their reporting on the violence of the last two years from Gaza has been tainted by a propagandist terrorist sympathiser? Anyone who takes Amnesty International’s Israel material seriously is nothing short of delusional.

I cannot repeat this often enough. Nobody knows what is really happening in Gaza. Palestinian clans are extended families. Even demonstrations against Hamas rule are moderated. Bloggers, reporters, activists, nobody is truly independent. Everyone in Gaza needs an income and they all have family that can be reached. The situation may be tragic and unwanted, but it all means that *NOTHING* that comes from the Strip should be taken at face value. Western media sources that use ‘reporters’ in Gaza without providing a caveat for their viewers are doing little but regurgitating and propagating Hamas propaganda. Amnesty International? Well they don’t care. On the subject of Israel, they have long since stopped being a human rights organisation. It took just 5 minutes to find Hind Khoudary’s real sympathies. When hiring Israel haters, Amnesty obviously do not engage in any background checks at all.

This was just a teaser. Almost 200 pages are ready to go, and I am not going to give any more spoilers now. But the question surely must be asked. How is it possible that Amnesty have a network of people on the ground who all speak Arabic and nobody noticed that Hind was busy tweeting this kind of hate? I am hopeful the report will give you the answers.

But the truth here goes way beyond Amnesty. The online propaganda magazine ‘972’ also shared the words of our Amnesty consultant. She got to tell the whole activist world about the ‘bloody scenes’ she will never forget. How many times was this shared by BDS activists? It isn’t even just one article. Hind is a regular. Anything perhaps, to further the BDS cause. It is likely that the only thing that will probably upset them about all this is that she was exposed. 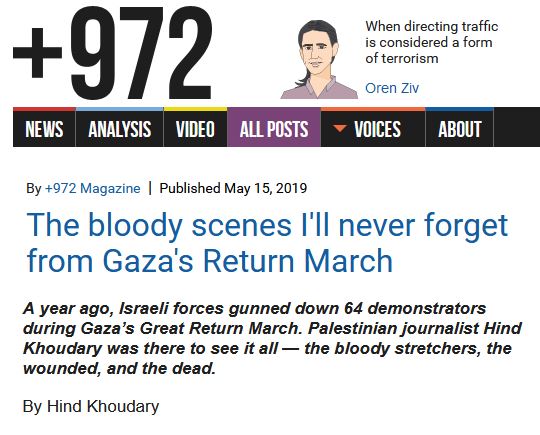 The Turkish channel TRT World have used her as well to ‘spread the truth’ to the world. I don’t think it will surprise anybody that Asa Winstanley’s propaganda rag, the Electronic Intifada have published her articles as well.

The London based Middle East Eye, seem to love her, and have over a dozen articles by Hind on their website.

People already accuse them of pro-Muslim Brotherhood bias, this won’t exactly help their CV. You’ll be pleased to know she learnt her trade being mentored by ‘we are not numbers‘ and taking part in the US Middle East Partnership Initiative. Groups in the west are eagerly helping these media types ‘learn’ how to spin their stories better, just as western universities are falling over themselves to offer students placements in law courses, so they can learn how to use our own systems against us.

A few hours after I published the teaser, Hind’s Twitter Account was no longer available. Her Facebook account has also been taken offline. It seems as if Amnesty International have lost some of their ‘reliable’ ears on the ground. 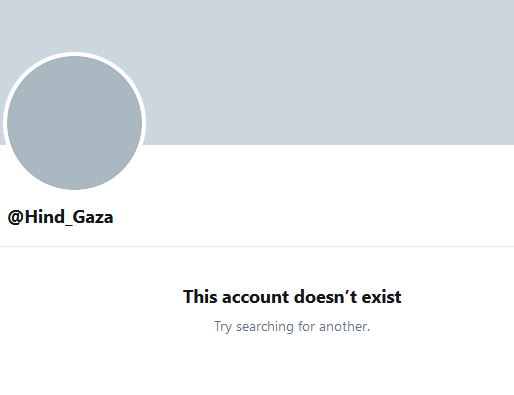