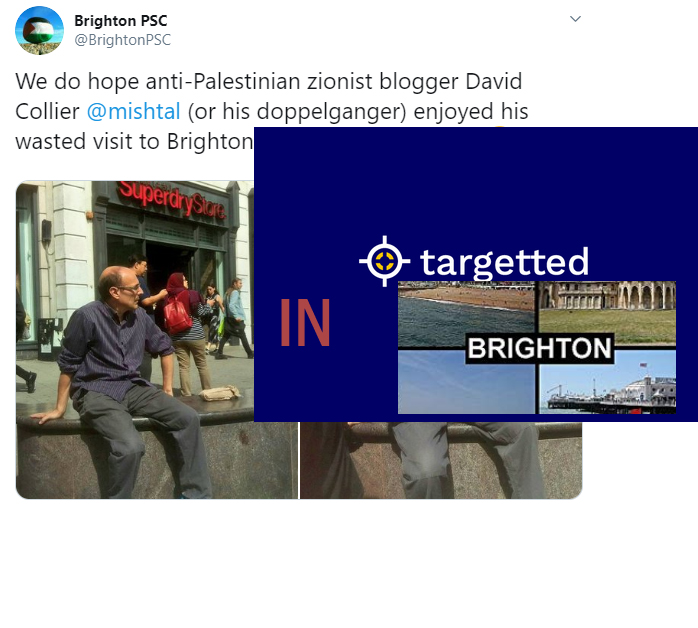 A Jewish family goes on a weekend holiday to Brighton

This weekend I went to Brighton. It was a quick getaway. I have been working flat out on a report into Amnesty International and having reached the end of a section, had a chance to get the kids away for a short break just before they return to school.

I used to like Brighton. It is an easy journey and the town is fun, but recently it has become a hub for antisemites. They’ve held several really nasty events and just a couple of weeks ago Chris Williamson was back in town. The Jew-haters have got a few events planned for when the Labour Party Conference comes back to Brighton in September.

On Saturday morning each of us went off to do ‘our own thing’ and we arranged to meet up for lunch by the Clock Tower. For those who don’t know Brighton, the Clock Tower is a grade 2 listed building situated right in the centre of town. It is next to the Churchill Square shopping centre, on the main road from the Station, near the beach and a good starting point for entry into the maze of narrow streets full of vintage stores and atmospheric cafes called the ‘Lanes’. If you were to choose a central meeting point in Brighton, you can’t go wrong with the Clock Tower. 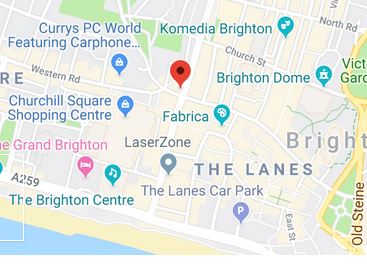 I arrived at the Clock Tower sometime around 12:30 and sat to wait for my family. Brighton PSC were also in town. Each week they set up a stall at the Clock Tower and a bunch of ageing Marxists, ignorant fools and antisemites gather together to tell lies to anyone who will listen. After a while I saw them looking at me and talking. One had clearly ‘clocked’ me at the Clock Tower and had begun to tell everyone I was there.

They became visibly agitated and unsettled. I ignored them but began to notice cameras were raised to take photos of me. One, then another, then another. About six or seven took photos in total. One guy circled around pretending to take a ‘video’ of the surrounding area, he slowed as he passed me, turned the camera directly towards me, and filmed a few seconds of footage as he walked past. None of this fazes me. I have been doing this far too long and I know what the PSC are. Branches of the PSC are little more than pockets of antisemitism, detached from the mother ship to allow the main PSC organisation a little ‘deniability’.

The first member of my family to arrive was my son. He sat beside me and we waited.  The cameras kept clicking. How many photos did Anne Mitchell want to take of me? Mitchell of course is under suspension from the Labour Party for antisemitism. So now we had a situation where members of the Labour Party that have been suspended for antisemitism were taking photos of a campaigner against antisemitism and his family as they sat and waited for other members of the family to arrive.

My son was uncomfortable. He wanted to move because the attention was unsettling him, and I had to reassure him it was safe, and these people are not inherently violent. Jewish life in Brighton in 2019. I couldn’t move because we had arranged with other members of my family to meet there, but I certainly didn’t want them being snapped as well. I moved off but attempted to stay nearby, so I could grab the others as they showed up without the PSC crowd seeing them. Not a pleasant situation to be in. When we had all finally gathered a little way down the road, we went to lunch.

It was harassment, but not violent. For me, the story was over. Except it wasn’t.

The online attack from Brighton PSC 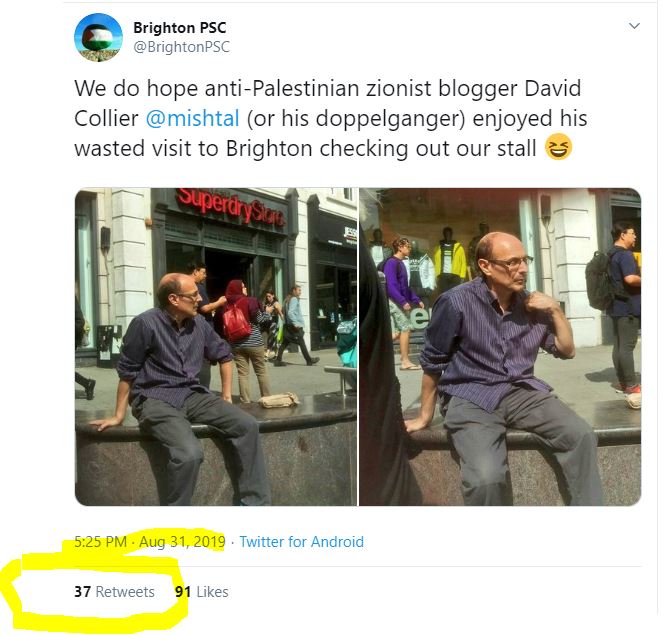 This photo was taken shortly before my son arrived and from the angle, appears to have been one of those taken by Anne Mitchell. This is creepy. They clearly saw me with my family, they must have known I was on holiday, what on earth were they doing publicly sharing photos in this manner? I protested at the invasion of privacy in a tweet and the back-up arrived. Tony Greenstein, another person too problematic to be a Labour member came in to attack the Jewish visitor to Brighton and support the PSC.

Greenstein appears to be saying any of the 93% of Jews who are Zionists are ‘fair game’ to be harassed and hounded in Brighton.

This statement by Walker is truly astonishing. She says ‘always’ because once, when I took my family for a day out to the PalExpo, Walker herself turned ‘hostile’ and helped have us all evicted. She seems to be saying she is a problem I need to protect my son from. Secondly, even putting aside that I was simply on holiday, what does this say about Jackie’s awareness of the dangers? That she openly admits that taking a Jewish boy near anti-Israel activists is a ‘profoundly disturbing’ situation with hidden dangers.

In any event I was now under-attack by the front guard of the antisemitic group ‘Labour Against the Witch Hunt’. All because a Jew went to Brighton on holiday with his family.

The Palestine Solidarity Campaign always play so innocent. We all know they are riddled with support from antisemites. EVERYONE KNOWS IT. So when a Jewish person is attacked by them in this fashion, it is the PSC setting antisemitic dogs on British Jews.

Let’s take a quick look at the photo they uploaded. When I took the screenshot, it had been online for 24 hours and had received 37 retweets. 4 of those appeared to be from locked accounts (not ‘blocked’, but ‘locked’). The image had been shared by 33 visible accounts.

All these accounts retweeted the image. Nobody is responsible for who or what retweets them, although they are more than capable of blocking antisemitic followers. The PSC argue that only a minority of their support is antisemitic. I ALWAYS argue that wherever the PSC is, over half of those involved simply have a problem with Jews. They are an organisation that acts as a magnet for antisemites.

Brighton PSC presented me with another opportunity. 33 random retweets. Let us look at the support these ‘peaceful anti-racists’ have. I have taken an example of a tweet from each to show the antisemitic conspiracy and Holocaust denial that inhabits the PSC sewer. These are the audience Brighton PSC plays to when it directs a personal attack against Jews:

But that’s not all. Twitters search function doesn’t work on retweets, so the 48% doesn’t included anyone who has retweeted Jew-baiting, antisemitic conspiracy posts, Rothschild theory or Holocaust denial. This project isn’t worth a detailed investigation into each and every account, but I managed to grab at some low hanging fruit.

@RedSimpson3 manages to post 400 tweets in a day. He retweets Gilad Atzmon and calls the Board of Deputies ‘ZioNazis’:

@illi4141 *only* tweets at 100+ tweets a day, but still manages to retweet accusations that Israel has ‘given’ the world everything bad that exists:

There is @oneforsorrow87 who thinks Israelis are the worst people that have ever lived on the planet and Israel is worse than ISIS:

There is AlanCol83626003 who thinks being an antisemite means you are a good person: 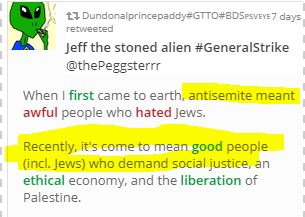 Or @Recepgulgun who despite mainly tweeting in a language other than English, still managed to retweet that Zionists should be ‘sent back where they came from’: 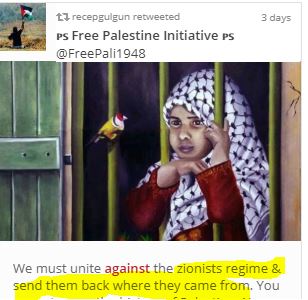 There is @aminnamangera1 who at 600 tweets a day is nothing more than a bot:

Which makes @Staircase2 at 266 tweets a day a real slacker:

There is @Battersby1888 who openly admits that he would have at the very least verbally abused me as I sat on holiday with my family: 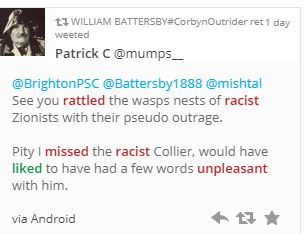 And finally @Think_Blue_Sky who simply thinks accusations of antisemitism are a ‘trick’: 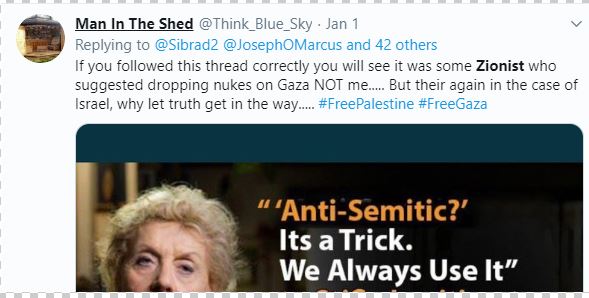 So at least (I didn’t check them all) 25 of the 33 visible accounts that retweeted the targetted attack are antisemites or bots. That is 76%. This is what follows Brighton PSC and Brighton BDS around. This is their core online support.  *This is an antisemitic group* and part of a wider *antisemitic organisation*. If over 75% of their visible public support is nothing but nasty antisemites, how on earth do officials in Brighton allow them every week to stand in the centre of town and spread their hate? It is beyond all reasonable argument. Would they allow neo-Nazis to take over their Clock Tower?

Is there anyone left in the country who isn’t fully aware that wherever the PSC stand, antisemites are there waiting to attack the Jews? Which means when they make an attack like this, they have to know what they are doing. They are setting antisemitic dogs on the Jews. It is the responsibility of the Palestine Solidarity Campaign to instruct all of its branches to cease this type of targetted activity. Did I mention Jeremy Corbyn is still a patron?

I knew all this about the PSC before I went to Brighton. But Brighton PSC targetted me so I thought I would remind people about the true nature of these thugs. Officials in Brighton need to ask themselves if this is really what they want tourists in Brighton to meet in the centre of town? A group with a support base that is 76% antisemitic.

Personally I learnt nothing new apart from the fact that next time, we will head somewhere else on the South Coast. More importantly there is this; I like Brighton because it was always fun as a child to go there. I highly doubt my children will carry the same type of nostalgic memories.

Enough for now. I have an Amnesty report to complete.