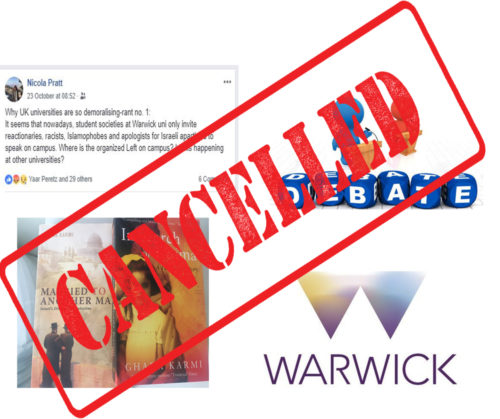 About two months ago, I received an invitation from a student society to speak at the University of Warwick alongside Ghada Karmi. I do not intend to name the society, nor the students involved, as I do not feel they are anything but unfortunate victims.

The event was to be a debate on Trump and the Middle East Peace Process, and by early September both speakers had been arranged. Over the last two months, I received several emails nailing down the finer details. On Friday I was told that the final pieces of information would be sent to me early this week. The event was scheduled for Thursday 1st November.

Ghada Karmi is a fellow and lecturer at the Institute of Arab & Islamic studies at Exeter. This places Karmi working alongside conspiracy theorist Ilan Pappe at the heart of academic anti-Israel activity. Ghada Karmi is a well known figure on the anti-Israel circuit, and I have seen her talk many times before. Her book ‘Married to another Man‘ was already on my bookshelf. In preparation for this event, I also purchased another of Karmi’s books, ‘In Search of Fatima‘: 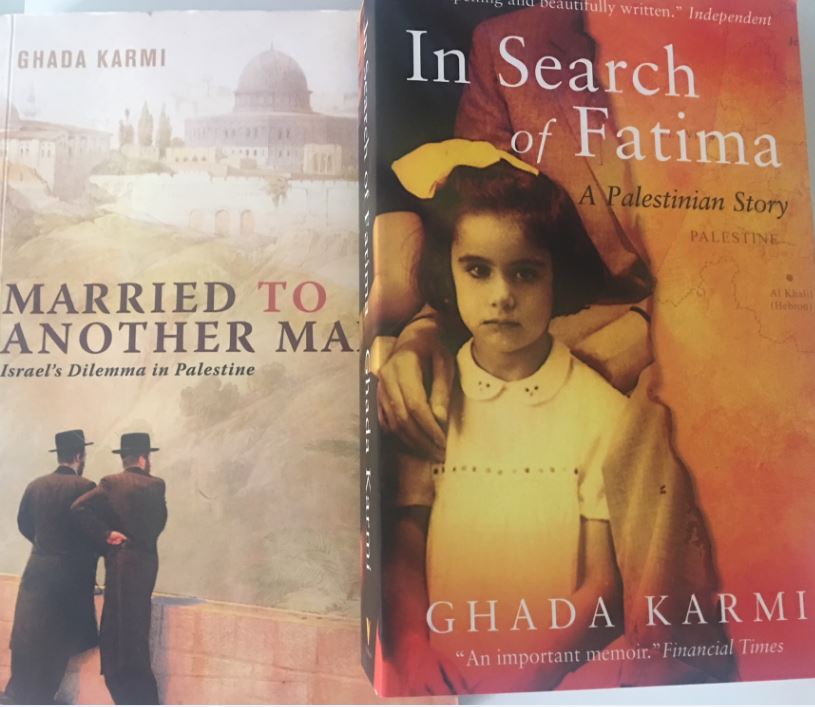 Ghada Karmi and the event cancellation

Yesterday afternoon I received a short email notifying me that the event had been cancelled:

The above email exposes a truly shameful episode. The reason given for this cancellation – Karmi ‘does not wish to debate with’ me. Yet Karmi had agreed to the debate and she had known it was me she was facing for some time. This last-minute cancellation is an extremely effective way of ‘no-platforming’, as without time to find a replacement, Ghada Karmi had quite clinically ‘shut down the debate’.

It is unlikely Karmi cares that students have been left ‘annoyed and confused’. Putting aside the outrageous notion that people in debate should decide who is allowed to speak for the opposition, Ghada Karmi is a ’cause above all’ academic, just like Ilan Pappe and many others. There are things these people don’t want students to know or see.

I highly doubt Karmi had planned in advance to scupper the event at the last minute. Who she spoke to and who advised her that it was ‘in the interests of the cause’ to cancel, we will likely never know. However, I would wager that whatever forces contacted Karmi, came from within the University of Warwick itself. As anyone who reads this blog would know, Warwick campus has a small but active anti-Israel academic faction. I have heard Warwick faculty tell awful lies to students, I have seen them promote myths and create events that simply flood university students with a deceptive poison.

They recently held an event there to deny that claims of antisemitism are anything more than a smear campaign. *Ironically*, they used that stage to suggest Zionists seek to shut down debate. I have even been denied access to an event there, and seen academics make up stories to justify such behaviour. Academics at this campus even created a ‘friends of Palestine’ society, because the student Palestine society wasn’t extreme enough.

So perhaps it is no surprise that my forthcoming appearance at the university was addressed online by a member of this clique. About a week ago, Nicola Pratt, one of the key anti-Israel academic activists at Warwick posted on Facebook a ‘why UK universities are so demoralising-rant no.1‘:

The post clearly has Pratt unhappy at something she has heard about a speaker being invited to speak at the campus. In one of her responses, she explicitly names me:

I want you to consider Nicola’s comments. This was posted almost two weeks after Marie Waters had been scheduled to speak on campus (the event was postponed), so it is fair to assume Pratt had ‘calmed down’ in the meantime. The logical conclusion is that Pratt had just found out I was attending or had just engaged in a discussion of some kind over my impending arrival. She wanted to let off steam and so posted her ‘rant’.

Then consider that at the debate, both participants would freely be able to express their views, present arguments to students and face questions. Therefore, what clearly bothers Pratt is that Karmi’s opinion is to be opposed. What is the alternative? She is clearly not bothered that Ghada Karmi would speak to students, hence the logical conclusion is that Pratt does not believe the political opinions she pushes onto students should face legitimate challenge.

Ghada Karmi has been doing the circuit for years, the idea that after two months, she suddenly and independently decided not to debate me, without a word in her ear from ‘friends’ is unsupportable. Someone ‘advised’ Ghada to close down the event. I cannot be sure if it was Nicola Pratt, or one of the other academic activists at Warwick, but judging from the posts above, it was certainly someone with the same regressive mindset. That these close-minded people are in education is shameful.

Rumours of my extremism have been greatly exaggerated

This is a core issue and must be addressed. It isn’t enough to suggest that I should have the right to speak regardless of my opinions. In many ways that position feeds into the narrative there is something unsavoury about what I have to say. This ‘sleight of hand’ is deliberate. Notice how I am aligned with Marie Waters in Pratt’s post (Nicola Pratt has clearly never properly read anything I have written).

There are two issue here. One is the freedom of speech argument. Two is a smear campaign. I am not denied a platform because I am far-right, I am accused of being far-right in order to justify denying me a platform. There is an important distinction. In reality it is my moderate opinion that they find so threatening.

What scares them the most is the fact that when placed on campus, students will soon realise that my message is at odds with what they are fed on campus. I present an academic argument and have spent seven of the last eleven years inside a university studying. I am not an enemy of Arabs living in Ramallah. My views over the conflict are moderate, well-supported and I am a stickler for historicity. I am well versed in the weaknesses of the anti-Zionist position. I can contextualise the historical events and humanise them. In short, I expose the other side as extremists.

So the last thing they want is to have their lies exposed by someone who knows more than they do, can explain better than they can and is far more reasonable than they are. It is this threat they need to silence. It is why blog after blog has been produced labeling me as everything from a misogynist to someone who hates Muslims. One even labelled me ‘the most extreme racist he has ever met’. The evidence they have for these horrific slurs – ZERO.

These people are both cowards and liars and the education of students MUST NOT be left to these people unopposed.

The links between academia and the political situation are not imagined. Ghada Karmi is a patron of the Palestine Solidarity Campaign (PSC). A movement that is riddled with hard-core antisemitic activists. Another Patron is of course Ilan Pappe. So too Baroness Jenny Tonge, a member of the House of Lords who disgracefully responded to the recent massacre of Jewish worshipers in a Pittsburgh synagogue by trying to blame Israel: 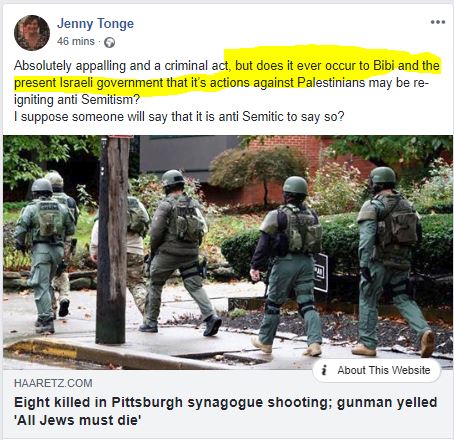 Jeremy Corbyn is also a Patron of the organisation. The PSC is merely one manifestation of an attempt to spread non-history as fact whilst injecting antisemitism into wider society. The Jeremy Corbyn supporting faction in Labour are another. Some academic networks provide another. These groups are intertwined and when you look through the names of those involved, you realise they are the same people wearing numerous hats. All these hats though, are made in the colours of the Palestinian flag.

A pyramid of tragedies

A denial of a platform, pushing lies so that arguments cannot be heard, the protection of a false paradigm. I could go on, the list of issues highlighted by the cancellation of the event is a long one.

Yet nobody cares. Pratt certainly doesn’t care that a ‘provocateur’, ‘an apologist for Israeli Apartheid’ isn’t coming to campus. Karmi doesn’t care, she knows she will be allowed to talk at Warwick without opposition. The university doesn’t seem to care, or it would have dealt with this insidious poison years ago. The real losers are the students, those left ‘annoyed and confused’ by an event cancellation that would have helped to educate them.

Academia doesn’t ‘have a problem’ that is easily remedied. It spews poison into the veins of society and wraps up its bias and intolerance in a fake intellectual veneer. This academia self-justifies and denies alternative voices as effectively as if it were a fascist soldier. The soft science element of modern academia today is as rotten as a forgotten carcass. Denying students the opportunity to hear different sides of an argument, in an environment where those speaking can be simultaneously challenged, is an academic crime.

I end with a simple message to those like Ghada Karmi who think they can silence me. There is no stopping. I carry on investigating, I carry on exposing, I carry on writing. I will take that platform wherever it is genuinely offered. If we all keep fighting, truth will out. Fake paradigms always fall.

This research is dependent on community support. It is no exaggeration to say that without you, much of the work I have completed would never have been published. I fight antisemitism and the revisionist narrative that demonises Israel. I was recently named as one of the J100 (‘top 100 people positively influencing Jewish life’) by The Algemeiner. My work is fully independent and can and does make a serious difference. There is always work to be done. In the last few years, many key stories on antisemitism that received global coverage were uncovered by this research and originally broken on this site.

38 thoughts on “No platformed again. Silencing debate and the shame of academia”