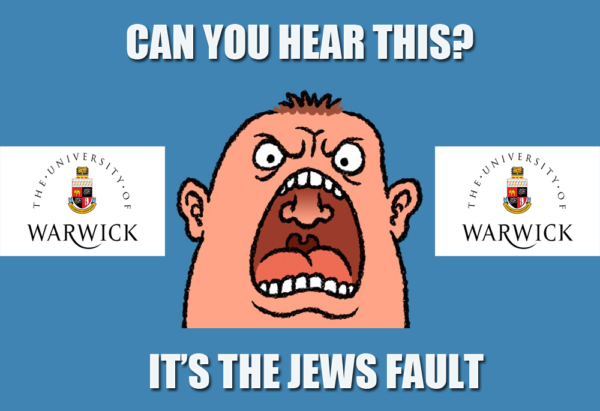 The story goes that three Jewish people turned up at the University of Warwick, and were told that the ‘public’ event had suddenly turned ‘private’. Warwick has a small clique of distinctly anti-Israel activist academics. The full account was written within hours of the event, and published on this blog.

Soon after my report was published, news organisations began to run articles covering the episode. Then came the response.

Blaming the Jews at Warwick

The first time that I realised that Warwick activists were trying to shift the blame onto those denied entry, was when someone called ‘Mahmoud Abdou’ posted a reply to my account of the event on Twitter:

This is clearly nonsense. Not only do my reports always try to stick as closely to the central truth as subjectively possible, but the idea ‘Mr Collier’ left ‘anywhere’ shouting ‘anything’ is absurd. ‘Mr Collier’ is always impeccably behaved. When I pointed this out, ‘Mahmoud Abdou’ responded with another tweet:

From this tweet, I realised he must have been there, and was therefore deliberately pushing a false version of events.

So I checked. Mahmoud is a PhD candidate at the University of Warwick. Mahmoud has had an interesting and varied academic journey since leaving Gaza in 2003. Like others from Gaza, he had originally set-out to study a field of interest, (in his case Molecular Biology and Biochemistry), but changed academic direction and merged his pursuit of learning with his anti-Israel activity. He suggests he is ‘dedicating his life to the Palestinian cause’.

Note: Since my complaint was received by the University of Warwick, which included the false allegations discussed in this blog, both those tweets above have been deleted.

Abdou appears to have given a talk at the University that night in a second event on Israel. He was also kind enough to post the content  publicly on Facebook. Abdou’s speech pushes many distortions, but there are two ‘stand-out’ comments worthy of note. The first was when he was discussing the Western Wall tunnel excavations of the late 1990’s:

This of course is a statement with lie built upon lie. There is no official Israeli policy to do anything of the sort. The truth is that during the late 1990’s, the only illegal, and dangerous, archaeological work, was carried out by Arabs in the area of Solomon’s Stables. In addition, the protection of Arab rights over Temple Mount since 1967, is an Israeli action that is probably unprecedented in history.

This is a religious libel that has no business being spread anywhere near a university. It is the type of lie spread by extremist Imams. The accusation carries dangers and historically has been used to stir up religious violence against Jews. It is rolled out whenever manipulative Arab leaders want angry people on the streets. This isn’t an ‘anti-Zionist’ libel, it is an antisemitic one. Openly pushed onto students at Warwick.

Why are Palestinians associated with terrorism?

Having tried to falsely impress upon every student present, that Al-Aqsa is about to be destroyed by invading Jews, Abdou then completely whitewashes Arab violence. This is what he has to say about the way Palestinians are viewed in the west:

‘As the Palestinians were slowly drawn into partisan politics when Hamas won the municipal and parliamentary elections in 2006-2007, and as the war on terror following the 9/11 attacks made the Palestinians increasingly become viewed in the eyes of American and various segments of the international public as terrorists..’

Nothing to do with hijacking planes? Slaughtering athletes at the Olympics? Bus bombings? Massacring people at prayer as they sat down for the Passover Service, or attacking schools? It was all everyone else’s fault and a mistake in the perspective of the west? The statement is simply absurd. If anything, since 2006, the perception of Israel has shifted precisely because people in the west have FORGOTTEN the horrific Arab violence that has underpinned so much of the conflict.

Which means this is the second time, I have caught someone standing in front of students at the University of Warwick, pushing propaganda that dehumanises Israelis, and simply doesn’t even attempt to adhere to the truth.

The first time was when Teodora Todorova, held an event intended to introduce the conflict to students. Todorova was a central figure in the decision to deny us entry. Todorova is a ‘Teaching Fellow‘ at Warwick. Unlike Abdou, Todorova already has a PhD, and is standing in front of students regularly. In her talk, Todorova ran with a string of fictions that even a committed conspiracy theorist would be ashamed to put together.

She had Mandate Arabs welcoming Jews. Suggested Arabs in the 1930’s didn’t have a problem with Jewish immigration. Left the Arab side helpless with only ‘ottoman weaponry’ to protect them. Grossly overstated and understated the Jewish population depending on what suited her argument. She got almost every specific date she mentioned wrong. Outrageously misled everyone in the room by stating suicide bombings didn’t start until the Second Intifada. And even suggested that the Jews escaping Nazi claws to arrive in British Palestine, were somehow different from those Jews that arrived elsewhere. A statement that rips the humanity from Jewish refugees fleeing Hitler.

And this was all in one introductory lesson. One. Todorova has a fetish for Israel that distorts every element of history to feed it. Yet she is free to act on her fetish as she feels fit, and feed these lies to students, because the university will do everything it can to protect her speech under the umbrella of ‘academic freedom’.

The false accusations of Lisa Tilley

Which brings us to the comments made by Lisa Tilley. Lisa Tilley was the first academic to bar us entry to the room on the night of the event. Tilley is a ‘Leverhulme Fellow‘ at Queen Mary University of London’. She is still listed on the Warwick website and held a postdoctoral fellowship there.

As Tilley was standing at the door at the event, I had almost no interaction with her. I stood behind those who I had attended with, and Mandy and Yochy led the conversation. If my memory serves me right, it was only when we were asked for identification, did I move to the front and offer it. Once rejected, I moved to the back again. The whole interaction with Tilley lasted about 4 minutes, my own interaction about 15 seconds, and I spoke no more than 15 words.

So I was more than surprised when I saw a quote from Tilley in the press, that seemed to suggest otherwise. This is what she had to say:

Physical and Verbal intimidation? Me? Even those who hate me the most, know this is absolute poppycock. What a disgraceful false accusation to make. Tilley locks the Jews out of an event, and then accuses them of unacceptable behaviour? It doesn’t end there, because Tilley also told members of the press that:

Lisa – what on earth were you thinking? David is always, *ALWAYS* impeccably behaved. This isn’t ‘opinion’, or ‘perspective’ – it is simply a LIE. People who spread lies about Israel or push antisemitic tropes are scared of my keyboard – that’s it – and that is how it should be. And an academic who last week denied Jews entry to an event, pushes this type of vile accusation? For people who suggest they are great believers in ‘justice’, these anti-Israel activists sure do have a habit of interfering with the evidence. Lisa – you are a liar.

So what is an academic doing MAKING UP stories that accuse people of being misogynistic, and inventing stories about them being verbally and physically aggressive? This isn’t just defamation. Tilley did every person who faces real abuse a disservice by LYING about me in this fashion. Shameful.

Is this what happens when a Jewish student complains about one of this clique? Do they get together and make up stories? Can you imagine being a Jewish student that relies on them for their grade? Or has to register a complaint about their behaviour? Remember the Nicola Pratt episode.

That is three people at Warwick that night who have made up lies about Jews, and have tried to convince others to buy into those lies. Two of them hold PhD’s.

I added these issues to my complaint, and have no doubt that the report handed to the university by the security team will fully support our passive, polite and co-operative version of events. I am awaiting the response from the university. These people have shamed and embarrassed every decent Faculty member and student on Warwick campus.

And it is important to remember that the issues mentioned are serious, but localised. After I released the last report, some press articles lost both perspective and context, painting Jewish existence at Warwick as an image of constant peril. Little could be further from the truth. As someone who constantly seeks context rather than headlines, and in support of Jewish students at Warwick, I need to address some of this here.

As a result of the exaggerated threat, Jewish students on Warwick released a statement that is worth reading. These students firmly believe that Warwick is one of the ‘greatest campuses’ in the UK for Jewish students. They remain proud of the growth and activity of the Warwick Jewish Israeli Society.

The facts speak in their favour. They firmly defeated the BDS motion, and passed a ‘Warwick Against Antisemitism’ motion in the students union, organising a ‘whole week celebrating the diversity in Israel and hosting holocaust survivors’. It was the BDS defeat that led to the small group of Faculty founding ‘Warwick for Justice in Palestine’ in the first place.

They accept they have issues with university support and individuals within the Student Union, but are insistent this does not reflect on their experience of Warwick as a whole. For them, most of the Faculty, and most of the student body are on-side and supportive. Anti-Israel activism is in general seen for what it is. Remember, only 10-15 students turned up for the event last Wednesday. On a campus that holds thousands.

This small group of activists are an issue, and whilst holding the greater picture in focus we must be allowed to deal with it. In context, and bearing in mind the real-life issues of the students. I am absolutely certain many of the Faculty on Warwick are appalled by the actions of the few. I am also certain over-exaggeration, confuses the issue, complicates life for all students on Warwick, and in many cases can be self -defeating.

What everyone deserves, is for the university to recognise the problem that does exist, and deal with it. The only question is – do they have the guts?

I fight antisemitism and the revisionist narrative that demonises Israel. I was recently named as one of the J100 (‘top 100 people positively influencing Jewish life’) by The Algemeiner. My work is fully independent, and your support makes much of what I do possible. This research does make a difference.

Please if you can, consider making a donation. Either a single amount or if you can a small monthly contribution.  Research such as this is intensive. We need to be there to expose the lies. Every contributions is greatly appreciated.