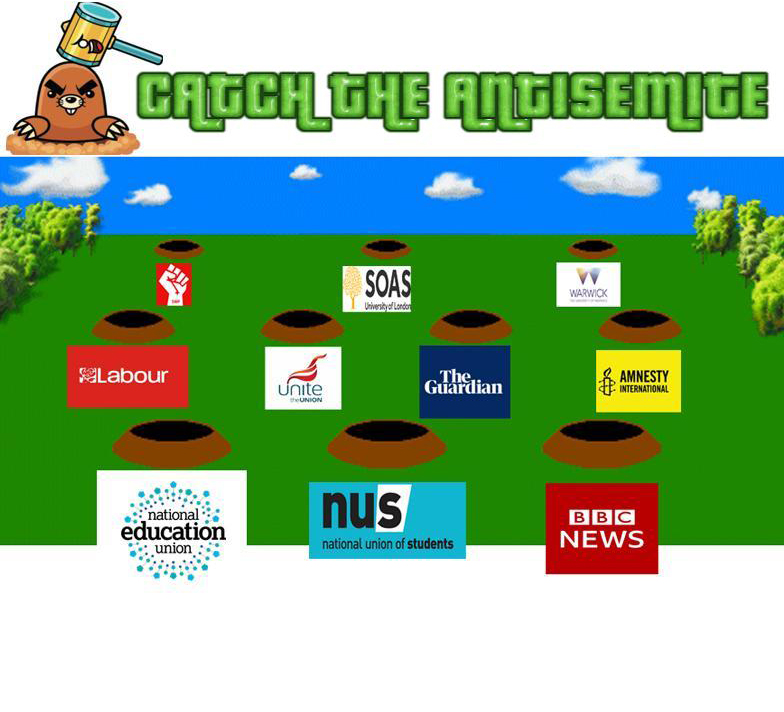 Catching the antisemites – playing a whack a mole game

Whack a mole is a popular game based on a repetitive and futile task. You are faced with numerous holes in the ground and you can never be sure out of which one the mole will appear. Your role is to ‘whack them’ wherever the pesky animals surface. The task is endless.

Most of those who are seriously fighting antisemitism understand this concept perfectly. It is what most of us do. In the real world however, we are not waiting for a mole, but an antisemite. Our ‘holes’ are newspapers, institutions and educational environments such as the BBC, the Labour Party, national unions and on the university campus.

There are dozens if not 100s of skilful, dedicated fighters against antisemitism who have their eyes firmly fixed on the ‘holes’ – waiting for the antisemites to appear. They always do appear – we catch whichever ones we can and the task is endless.

The mole, the hole and the task at hand

This is one of the reasons I rarely publish news of success stories. The research behind this blog has been at the forefront of the battle against antisemitism for years. I have been responsible for countless headlines in every major media outlet in the UK and many abroad. On Saturday it was the Telegraph and yesterday I even made the Bookseller. Many exclusives give credit to my research – some do not. Publicity is never sought for publicity’s sake. The problem is inherent in the game we play – ‘catching an antisemite’ or ‘whacking the mole’ is of limited value if we do not follow through and ensure the hole itself is filled.

Is Pearson a victory?

I can use Pearson Education as the first example. Over the last few days I have received dozens of congratulatory messages over the withdrawal of the Pearson Education book. On the face of it, the story is a success. The Zionist Federation and UKLFI turned to me to with concerns about the bias in a school textbook. They asked me to do a proper analysis, which I did. I was left in no doubt – the textbook carried major historical distortions and many of the usual anti-Zionist messages. It wasn’t just a slight bias – but a rewrite of the historical pillars upon which the conflict was built. I published the report – Pearson went off to conduct a review – and recently announced that the book has indeed been withdrawn. Success claimed – the book is no longer available. Mole duly ‘whacked’.

But look closely at Pearson’s announcement. They claim they found ‘no overall evidence of anti-Israel bias’. This is a lie. I know it is a lie – and I am pretty certain that they know it is a lie. In their own response they claim they need to ‘rebalance’ sources. How can there be no bias if the sources are unbalanced? Might I suggest they invest in lessons in verbal reasoning or logic solving. They can order helpful textbooks from their own warehouse.

None of this matters. Pearson has shareholders and a duty to look after its own credibility. We do not need a public admission that their processes are flawed.

And make no mistake the Pearson system is messed up. This book was not produced in a garage by a couple of teenagers. There was a process. It goes through many stages – it passes through several hands and quality checks. The book should never have made it through – but it did. There was a weakness in the system – and that weakness was exploited. The result was that 10000s of schoolchildren were fed propaganda. So I whacked that mole. But what now? Can I claim a victory just because future children will not be fed that same propaganda from a single book?

10000s were brainwashed and because of the way they responded I have no way of knowing if Pearsons have plugged that hole.

One of two possibilities are likely. Pearson either:

It is not about accepting a ‘victory’ or chest-thumping on the nearest rooftop. I have sent an email to Pearson asking them if they have investigated how the book ever made it through the quality control process in the first place and asked if they are taking steps to ensure this can never happen again. I don’t just want to whack the mole – I want the hole filled.

Which brings us to the BBC. A news story is not put together by two hands. In a complex news article – between the field and the editorial team a dozen people can have input. Time and time again, the BBC produce a catastrophic article. The problems are so common that there is an organisation, BBC Watch dedicated to monitoring the bias.

As an example, last Christmas they published an article about Christmas trees from around the world that only managed to find seven trees – three of these were in Palestinian areas. That is beyond outrageous. It indicates that the article itself was always intended to be a propaganda piece. It was put together and published by people using the BBC for their political activism and exploiting a weakness in the system. I did whack that mole. They responded by introducing just four more trees to dilute the propaganda. The propaganda remains. Each time we do this we are playing whack a mole with the BBC.

Outsourcing the problem to the activist Jews

Once an article has been red-flagged and edited, as part of their social responsibility the BBC should check the supply chain of that toxic article. The people responsible should either be shown what they have done wrong – or in the case of activists exploiting weaknesses – simply removed from their roles. There is no excuse whatsoever for a situation where the activist who produced the Christmas tree article is sitting today behind a desk at the BBC wondering where else they can use BBC resources to make a Palestinian propaganda piece.

As we saw with the Labour party- the problem at the BBC is institutional. The BBC are clearly the most important of the news providers but there are dozens of large and important organisations with similar issues. The NEU, Unite, Amnesty, the list goes on and on. Because none of these organisations are dealing with the antisemitism and propaganda as they should – they have all outsourced their antisemitism problems to the Jews – who are a minority group left to play whack a mole against those that hate them.

None of this is good enough. They have a duty to do better. We have a right to demand a follow through.

There are armies of hard-core anti-Israel activists, who constantly look for weaknesses in the system. Last year at UCL, some ‘academic activists’ placed a propaganda exercise, dressed up as an informative art display, in a central position on campus. It must have been seen by 1000s of students. The exhibition was so badly put together – that a 1957 letter from Jordan was on display for months as a pre-1948 letter from ‘Palestine’. Only one student brought it to my attention. I turned to Jonathan Hoffman for help. We complained and Hoffman spent several weeks in communication with the university. UCL went through the motions of pretending to care.

We did not get the exhibition removed (failure) – however I have been informed they have put in place a new process to ensure it does not happen again (success).

The situation is the most toxic on campus. Where the ‘activist-academics’ have real standing and legitimacy. You might ‘whack a mole’ once or twice – but these academic activists will constantly be looking for weaknesses in the process and receive ‘freedom of speech’ protection from their university. This is where government help and a well organised community response is needed the most. Nobody has a right to lie to students without challenge – certainly not those paid to educate them.

Much to do – do not waver

I refuse to play whack a mole or accept that organisations such as the BBC can outsource their problems to people like me. They employ antisemites, propagandists and others – willing to twist the news for their cause. This is their problem – not mine. It is time we began to make demands of any organisation that has allowed antisemitic anti-Zionism to become an acceptable part of its own culture.

The advent of the recent crisis in the Labour Party is the result of decades of BBC headlines, university events and Amnesty propaganda. It was also the result of us accepting our roles as willing participants in a Whack a Mole game. It is time to say enough.

There is so much to do and 2020 will be a busy year. We have a right to expect everyone to deal with antisemitism – and the anti-Israel propaganda that helps to spread it – with all seriousness. The organisations have a duty to do so. We can and should demand more from them. Next week we mark International Holocaust Remembrance Day. Antisemitism is not a game.

“Success is not final, failure is not fatal: it is the courage to continue that counts.” – Winston Churchill.

This blog is unique and the results speak for themselves. This research has been responsible for 100s of mainstream newspaper articles including several headline stories. I do not focus on speaking to our own bubble but explicitly take the message to the wider world. I  engage in deep research, much of it undercover, into anti-Jewish hatred, anti-Zionism and anti-western extremism. Your support really does make all this possible. By placing the evidence in such concrete form, this research really does change the narrative. My work is fully independent. I was recently named as one of the J100 (‘top 100 people positively influencing Jewish life’) by The Algemeiner.  If you can, please consider making a donation towards the research.