We all know that Jew-hate spreads in the Twittersphere, but nobody touches on how much of it is there. Nor do people draw comparisons between the level of ‘anti’ activity, and the level of ‘pro’ that seeks to answer it.

As a quintessential minority group, Jews are drowned out on social media, and because these platforms operate on algorithms that reward ‘popularity’, Jewish people are on a loser from the start. Networks of hate even gang up to have Jews removed from the platform. I have experience of this myself (examples 1,2,3,4,5)

‘Zioporn’ addicts. Thousands of accounts in the Twittersphere that indulge their ‘kink’ by watching, liking, or sharing, either fake or butchered images that demonise Israel or Israelis. The more gruesome the image, the better the high. Authenticity is irrelevant. The ‘happy ending’ normally involves a tweeted utterance of disgust or outrage directed towards the state of Israel, or those that support it.

In a world which contains brutal regimes that slaughter millions, this tweet (posted 28/12 at 2:28am) suggests Israel is the ‘most despicable’ nation on earth:

I wanted a snapshot. Analysing a period on Twitter and then quantifying the output that was found. Such an exercise would also allow me to draw a comparison with the way other nations are treated on social media – showing just how exceptional (and therefore antisemitic) the anti-Israel rhetoric is.

I took a 36-hour period, from midnight on the 28 Dec, to noon on the 29th. Only two search terms were used. As nobody has any interest in a troll spamming his way to 100 dormant anti-Israel tweets a day, I set a bar for a minimum number of retweets. This ensured that only the hate that travelled was tallied.

I then split the relavant tweets into these three groups:

There were just 32 qualifying pro-Israeli posts found. Anti-Israel posts dwarfed both the ‘pro-accounts’ and the ‘news accounts’ combined:

A total of 322 anti-Israel tweets were captured. These were retweeted a total of 28,023 times and received 90,165 likes. These tweets were viewed 4,865,421 times, or over 10x the number of views that the pro-Israel retweets received. For every 100,000 people we reach with the news that Israeli soldiers shot a terrorist in a firefight, millions will hear that the ‘occupation forces shot a footballer in the back’.

This figure is just indicative of the difference in scale. Imagine what is taking place with the word ‘Zionist’ in Arabic, Russian or Urdu. Fake news spread by the global networks of anti-Israel activists in the Twittersphere is in complete control of the narrative.

A union of haters

I want to give a few examples I found The first is this tweet by MintPress News: 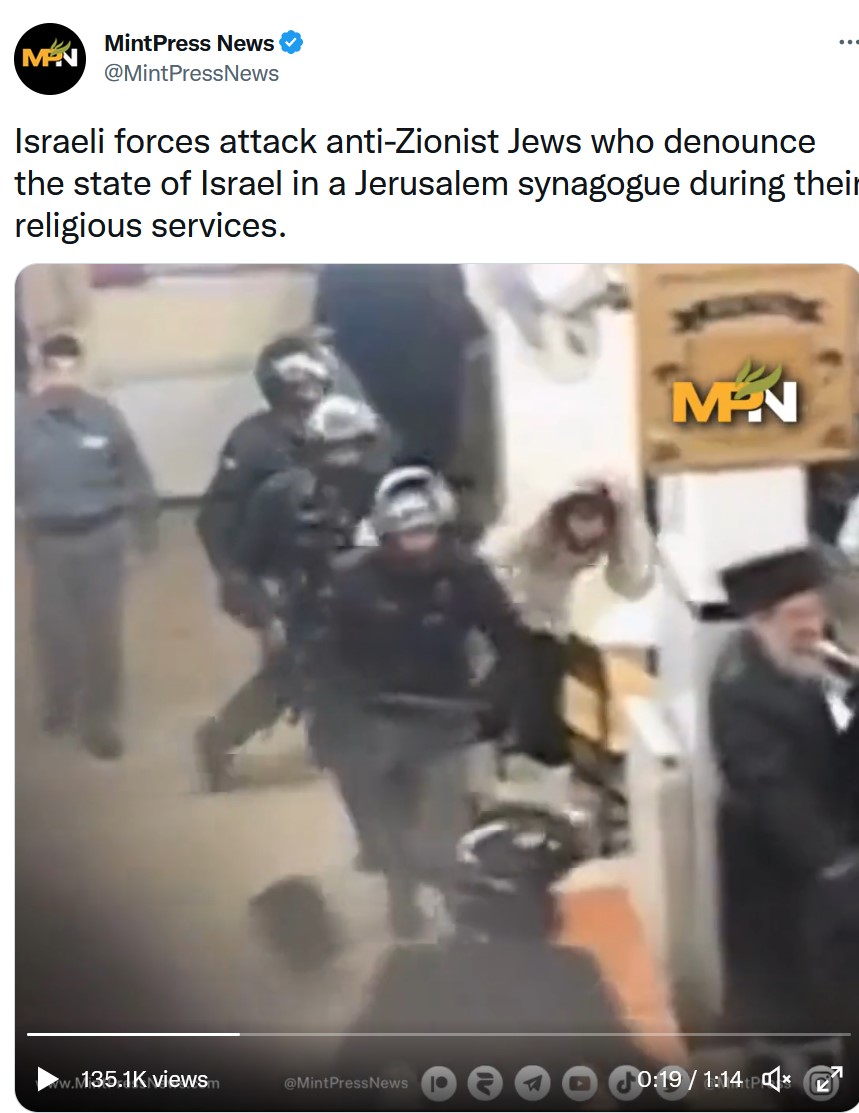 According to MintPress News, this is a video showing Israeli forces entering a synagogue of Anti-Zionist Jews and acting in an unnecessarily violent manner. The implication is that this is a recent event.

In fact, the video is badly butchered – and carries two separate incidents. The first occurred over 13 years ago in 2009. I could not place the exact incident, but riots did break out between an ultra-orthodox community and the police following the arrest of an orthodox woman accused of abusing her three-year-old-son. This may be connected. However, in some of the footage, the police can clearly be seen wearing masks, which means part of the video is from a separate incident in 2020. This is likely to be concerning orthodox communities breaking Covid restrictions at the time.  Whatever the truth behind these two events, the fake video received over 135000 views in just a few hours.

A round the world tour of antisemitism

This next one is from Middle East Monitor. The media outlet is a Muslim Brotherhood mouthpiece funded by Qatar. It aligns with Hamas and is Sunni Muslim in outlook:

Middle East Monitor chose to regurgitate the annual smear that Israel has dams which it opens to flood Gaza. In reality there was just heavy rainfall in Southern Israel and everywhere flooded.

From Sunni to Shia. 5Pillars is a pro-Iranian mouthpiece, and its chief editor Roshan Salih, spent several years working for PRESS TV. They chose to share a video counting numerous terrorists as children and making outrageous claims about sexual abuse: 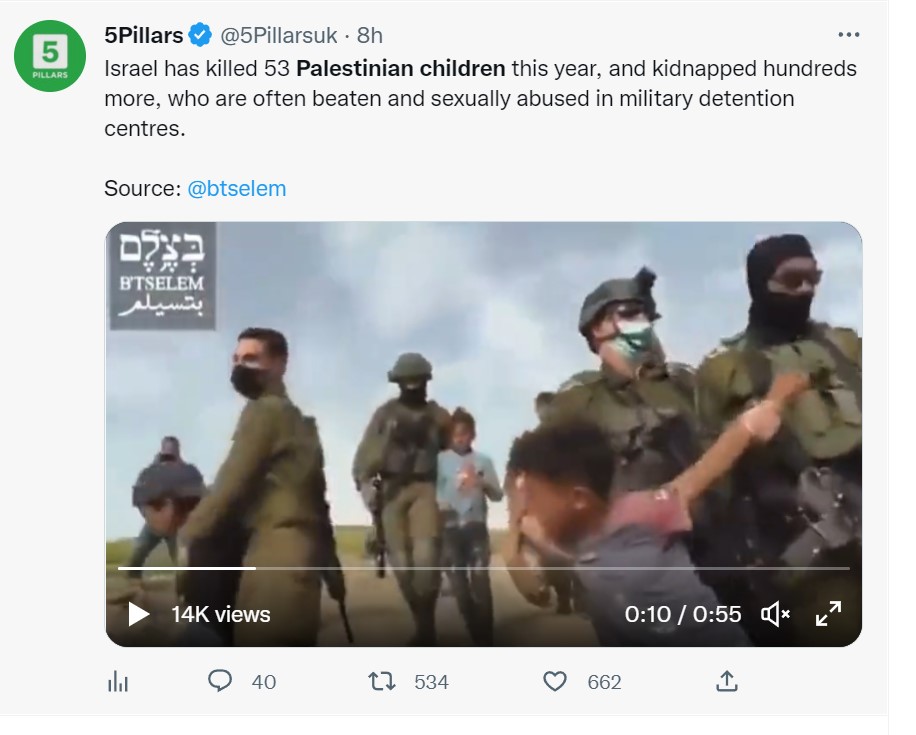 Standing alongside the Sunni and Shia, we encounter the far-right racists. The Celtic Clan account is a sewer of white nationalist ideology:

There is also a whole chain of Palestinians, who are worshipped in the west, and get to call themselves ‘human rights activists’ simply because they hate Israel. Examples like Muhammad Shehada write for numerous western media outlets. His tweet about Netanyahu and Apartheid was retweeted 1,640 times.

We can always rely on Sinn Fein to stand with the terrorists. Sinn Fein Youth received over 1050 retweets for their input:

Then there are the NGOs, like Amnesty, B’tselem, Al Haq and HRW. Adalah is the NGO that wrote the sham list of Apartheid laws well over a decade ago:

There is nothing on the side of truth like this – not a single outlet to match an ‘Electronic Intifiada’, let alone media machines like Al Jazeera. Jews are facing a tsunami of state-funded revisionist material that sets out to demonise them.

Israel is the exception

The truth is that a person is far more likely to run into a post that spreads fake news and demonises Israel, than one that has any balance at all. And once a user indicates an interest in a particular post – the algorithms ensure they will be spammed with more of the same. The interconnectivity of the online experience means that displaying interest on one platform, will influence results they see everywhere. Slipping into an anti-Israel rhythm online is easy. And Israel is treated differently from all other nations.

A simple search of failing states such as Pakistan, or brutal occupiers such as Russia, turns up entirely different results. Yes, there are posts that criticise, but even with Pakistan, they are few and far between – with normal political disagreements taking place and many posts giving nothing but respect. There is no demonisation campaign that focuses on the people of any nation but Israel. Remember the poster in the beginning who claimed Israel is the ‘most despicable nation’ – this is what he has to say about a Pakistani state that persecutes minority groups at will:

And this ‘special treatment’ reserved for Israel means that Jew hatred is spreading throughout the social media networks almost unchallenged. There is a tsunami of hate out there. By permitting blatant fake news to circulate without forfeit – social media platforms have become the primary conduits for spreading antisemitism. A radicalising force like none we have ever seen. If you want to understand why everything seems to be getting worse all the time – you really need to look no further than your phone.

Rather than end on that depressing note – I want to wish all my followers and all those that support me – a truly special 2023. We must keep fighting and I really cannot do what I do without your support. But we are also allowed to raise a glass when time allows. All the best and wishing a happy new year to all.

Help me fight for the truth

I battle back against those who seek to revise history, demonise Israel – and I expose antisemitism wherever it is found. I fight when others do not. The results speak for themselves and for eight years I have been exposing hate and creating headlines.

Please help If you can, consider making a donation to help this research in 2023. Your help makes it all possible.

20 thoughts on “How the Twittersphere spreads antisemitism”