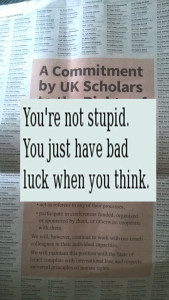 There is more than enough evidence to show that for over 100 years, Arabs have been making up excuses to kill Jews. This antisemitic drive, this inability to accept anything that is different, this backward, regressive ideology, took British Palestine and drenched it in Jewish blood. This violence led to partition and the creation of Israel. Despite this, those fighting the Arab corner have spent decades trying to persuade the world that in actual fact, Israel, or more precisely the Jews, are the problem.

This is the ‘opposite’ of the logical argument. Those that propose that despite all the evidence, the Arabs actually want to live in peace with the Jews. As Iraq, Lebanon, Syria, Yemen, Libya and Egypt have all recently shown us, the Middle East is a nasty, vicious neighbourhood. But even though different Islamic groups (no different from Hamas or Islamic Jihad) are tearing the entire Middle East apart in political or religious factional disputes, the wise sages behind BDS are insistent, if Israel lowers its guard, the Jews will know peace. It is blatant poppycock.

The leading lights of BDS have almost to a man, claimed Israel suffers from paranoia, is highly strung and strikes out in irrational anger at imaginary enemies .

“The outcome of this mentality was an intolerant, high-strung and paranoid society that believes it can only rely on military power to survive.” – Ilan Pappe

So let us for one absolutely crazy moment, accept that Pappe is correct. Forget history, forget the call to kill all Jews in the Hamas Covenant,  forget a century of historically recorded Arab rejection of Israeli moves towards peace. Israel is making it all up. Israel is an insular paranoid state that through its own ‘psychosis’ has created an enemy at its door.

If this is the case, is there anyone who would actually argue, that the way to approach this issue would be through international isolation and the boycotting of the paranoid state? If Pappe is right, what is that state going to do when isolated? My 10-year-old can work that one out. This blatantly flawed logic, using the BDS narrative, highlights clearly that the intentions of BDS are not peaceful. The intention of BDS, part of the cycle of terrorism is to continually fuel the dispute and to actually keep the two sides from talking to each other. BDS is opposed to the peace talks, opposed to the 2 state solution and opposed to direct negotiations. BDS is as I write, persuading terrorists to pick up knives and stab Jews.

In telling Palestinians not to negotiate, boycotting Israel is part of the ongoing war against the Jewish state. Forget the fact that Arabs openly call to kill Jews, forget the fact that the Arabs are refusing to negotiate, forget the fact that in the last few weeks, deliberate religious incitement has been used to reignite the conflict, forget all of that; just by using the overtly flawed logic they use, anyone, and I mean anyone, who entertains the notion that BDS is a cause of peaceful protest is either an antisemite or an idiot.

Last week at SOAS in the middle of what was supposed to be an academic exercise, there were several references to upcoming surprises, or ‘initiatives’ as the anti-Israeli academic activists described them.  I call them anti-Israeli activists rather than pro-Palestinians for a simple reason; it is the focus of their attention. Although they were at a meeting for ‘Palestine’, all they talked about was how much they hated Israel. I heard not a single productive word in two entire days on anything that would actually help a single Palestinian – thus these people are ‘anti’ rather than ‘pro’. Theirs is an activism driven by hate.

In any event, today (27/10) in the Guardian was yet another letter signed by anti-Israeli activists, all academics working in jobs that teach our children. This I suppose was one of the ‘initiatives’ Ilan Pappe had promised us at SOAS. 343 signatures in total, although as it specifcally states, the advert is also a clear call for more to join their cause. 26 of these original 343 come from SOAS, a university specifically named and shamed as a university that gives the floor to extremist speakers.

I have begun to work through the list. These were the first 7:

Mohammad Abusara is actually Palestinian, so let us just accept he is simply declaring his support for no negotiations, no two state solution and a continuation of the religious fight of Hamas and Islamic Jihad.

Arshin Adib-Moghaddam appears on the same 2009 boycott letter, saying Israel ‘must lose’ a war with Hamas. It is the way these boycott letters are generated, using email lists of activists, sending out to their ‘activist friends’. 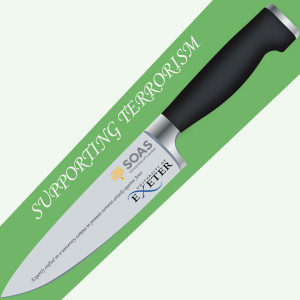 In other words, there is nothing new here. The same academics, either making the same mistake or restating the same hatred. Reading through the list, you realise this is almost in its entirety a rehash of previous adverts. Pappe, Ben Dor, they are all there. Using their own mailing lists to create noise and a false aura of strength.  And why has this come out now? Because last week, a proactive peace gesture towards Israel was made by artists who believe co-operation and cultural engagement are the way forward. Fancy that. And then as a response, this advert of war appears, Islamic funded hate campaigns specifically designed to drive a wedge between two communities. After all, just where does the money come for all these hate conferences, hate adverts, hate campaigns?

And the Guardian is complicit. Yesterday, to create maximum effect for today’s advert, the Guardian deliberately ran a piece criticising last week’s peace initiative. In a co-ordinated attack, a list of letters explaining why cultural bridges do not work, was needed prior to the release of today’s advert. They all fight this cause together. Blatant and disgraceful.

Last year I undertook a module in constitutional law as part of an LLM at Birkbeck, University of London. During the final weeks, on police powers, suddenly a case of Palestinian activism appeared. It is not a game changer, it set no precedent, it appeared on no other syllabus, and yet my lecturer had decided to place it on the agenda. As a Jew, I was sitting in a lecture hall in London looking at pictures of Hamas flags, the flags of an organisation that openly suggests I deserve to die.  Activism disguised as academia.

I already have a Masters, but have hit the ceiling in academia that I know other Jews also find exists. I desperately want to continue studying, want to work towards a PhD, but with my interests, my political position, there is nowhere left for me to turn. So I am left seeking post graduate education not connected to my core interests because UK academia has declared war on any Jews that do not dance to the ‘BDS’ drumbeat. The ‘antisemitic ceiling’ of the UK university in 2015. Islamic departments funded from abroad, pushing money into propaganda campaigns that ‘conquer’ student unions thus creating an overtly anti-Israeli, anti-Jewish atmosphere on campus. This invasion stifles academic debate, blocks out criticism, disseminates propaganda material to colleagues on campus, the more foolish of whom join the cause. And it is all assisted, supported and given false credibility by left wing media.

These academics, all 343 of them are either stupid or antisemitic. It is up to them to decided which one of them is the correct description in their case and maybe some are both. Either way, I don’t really care, they are dangerous, not just to Israel but to UK society and there is no way these people are fit to be educating the next generation of leaders in our universities.

2 thoughts on “The *dangerous* idiots of academia”