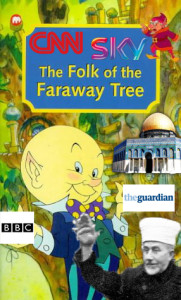 As a child, I remember with fondness, reading and re-reading the adventures of Jo, Bessie, Fanny and Dick (the names changed in later editions for reasons that are not totally clear to me), who were four children living near a magical tree that took them to strange and wondrous lands. These stories of course were in Blyton’s tales of the ‘Enchanted Wood’.

Today, somewhere in the press rooms of many major media outlets one can only believe a secret passage leading to that very tree exists, and as the reporters scale the wooden branches looking for stories, the land they find, swirling in the clouds above, is the land of ‘Topsy-Turvy’. The land where everything is upside down.

Rarely has that been more in evidence that over the last few weeks, when a false and deliberately inciting claim regarding a religious site, led to publicly made religious calls for violence that in turn led to acts of brutal murder against innocent Jews. For those that have missed the trick, this isn’t an issue about Israel at all, this, as with previous slaughters of Jews on exactly the same false premise, is plain old religious hatred.

The cries of hatred were just as those that have gone before, and in predictable fashion articles written by those supporting the claims or condoning the violence appeared. Some even implying that just a few short days remained until Al Aqsa falls to the Jews. Whether in 1929 or 2015, the method is simple, the reaction violent and the result is always the same.

So the press-corps clamoured up Blyton’s tree, in a frenzied effort to stand on their heads. To ignore the deliberate religious incitement and to place moral responsibility for the deaths of the murdering terrorists at Israel’s door. All this of course, whilst down here in the real world, Arab attempts to deliberately change the status quo at UNESCO by claiming religious ownership over several of the most important Jewish religious sites were almost universally ignored. Edgar Davidson’s blog on how historical events would have been reported using the same system, may be amusing, but there is an undeniable truth to what he is saying.

But it was the world (re)discovering the ‘amazing Mufti’ that provided the most acrobatic and flexible displays of journalism. This didn’t come about by accident, there is an indisputable and vitally important link between the Mufti led slaughter of Jews in 1920, the Mufti inspired slaughters of Jews in 1929, 1936 and 1941 and the current slaughter of Jews we witness today. It was for this reason, Netanyahu made mention of him in his speech. *All the other noise* around that speech is just static. Of course in Blyton-land, the reverse becomes true, so the focus becomes the badly worded comments, and the actual relevance becomes the static; hence the international uproar and front page news.

Over the last 4 days, much has been written about the Haj Amin al-Husseini the ‘Grand Mufti’, so I do not intend to spend much time returfing newly laid grass, nor make him the focus of this post. For the sake of clarity I will simply list what I believe to be the major points, so those still unaware get the outline.

I will make no real comment on Netanyahu’s comments in his speech. I believe it was little more than badly worded (which carried an awful implication). However much influence al-Husseini did or did not have has no bearing on Hitler’s hatred of the Jews or the program of slaughter. The *only* real question is whether at this point in late 1941 Hitler already had considered German troops entering Palestine and whether such notions had developed into potential strategy. As history thankfully played drastically different cards, the question is pointless. What is true is that Netanyahu’s knowledge of the Nazis, his grasp of history and  his understanding of this particular period in the Zionist / Israeli narrative far exceeds almost all of those writing about him.

The connection between Haj Amin al-Husseini and the knifing attacks today is religious based antisemitism. Other forms exist as you neither need to be religious yourself to be an antisemite, nor as an antisemite does the target of your hatred have to be religious, he merely has to belong to ‘a certain race’. These attacks are explicit antisemitic attacks and yet people are trying to describe them as being part of the national conflict. I recently wrote a piece on 100 years of excuses to address this false narrative directly.

Many people simply cannot see antisemitism when it is displayed in broad daylight and even when it carries a knife; worse still, people sometimes cannot recognise it even when they are the ones holding the knife themselves. The recent comment by the councillor Beinazir Lasharie that she has ‘nothing against Jews’ whilst arguing she has seen compelling evidence of the Zionists being behind ISIS is not new; we see such blatant contradictions constantly. Some antisemites are Hitlerite with an open and self-accepted distaste for Jews, but many more are not.

These people do not think they are unjustified, they do not think their logic is flawed or born in hatred or that they are being unreasonable. For them, in their minds, there exists a simple, repetitive truth; there is a valid, reasonable and justifiable excuse to hate, persecute and in some cases exterminate Jews, even whilst at the same time maintaining with a straight face they had nothing against them as a race. However absurd it may seem, it happens too often to be discarded.

The idea that antisemitism is merely the ranting of a village idiot that could be persuaded to think differently if only ‘education’ was available simply does not explain it away. There is more than enough evidence to suggest that the more educated antisemites became, the more elaborate the antisemitic libel and the more industrial the persecution. The Jew went from simply spreading disease amongst his neighbours to secretly working in laboratories to create the disease itself. Knowledge of how germs spread did not halt the libel, the libel evolved to fit the science.

Today we can see nationalism rising in many countries across the globe, we see regressive religious-based extremism slaughtering millions, we see borders going up, wars being waged and all of the age old problems of humanity alive and well in even the most modern of societies. Blacks know racism is still rampant, women know that the word ‘no’ too often has no impact and our children suffer sexual abuse that most simply cannot fathom. Laws can provide redress, can prevent overt discrimination and can even send a particular view or habit into the shadows, but they cannot stop people being people.

The Mufti was viciously antisemitic and he passed his antisemitism (and the knife) down to the Arabs committing the atrocities in Israel today. That is the link. If you want to know why Jews are being attacked today, the answer is in the history. It is also the important message that was lost as the media concentrate on the version of the world they see in Topsy Turvy land. Let us not have the narrative dictated to us by those who chose to walk up the tree. Their attitude, behaviour and unprofessionalism is unacceptable. I don’t want to go as far as calling them antisemitic, but it is about time someone dragged them out of the clouds.

6 thoughts on “Stabbings, the Mufti and Enid Blyton – the week that was”