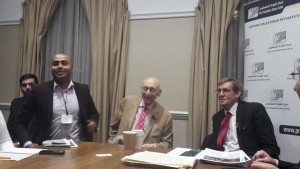 It is 27/10/2015 and I am at 1 Parliament St for a ’roundtable event’ organised by the Palestine Return Council and hosted by Gerald Kaufman. I had not been to one of these before and therefore had no idea what to expect, but as all the names on the invitation were hostile to Israel, I was hoping for a little excitement. However, even I did not expect to be taken down the route of global Jewish conspiracy theories.

The room was small, but it was packed full. The table was not round but rectangle and Kaufman was very late (this not the first time the Palestinians have said one thing and done another, nor that their friends make them promises of support and fail to deliver). The subject was to be British Foreign Policy towards Palestine since 2010, so it came as no surprise when the early attacks were directed towards the Conservatives; I need not have worried though, this room contained people with far greater hatreds.

Before Kaufman belatedly arrived and spoke, there were those such as Martin Linton, who used the time to speak. A red light was flashed to all those who support partial boycott and are unaware of classic PLO strategy. Back in 1974 the PLO changed strategy and rather than reject all compromise, stood behind a new ‘Ten Point Program’ that would see them accept any part of ‘Palestine’ Israel was willing to cede through negotiation. Their goal was still the same, and they would not deliver peace at any point, but felt the only way they would defeat Israel would be by using what Sir Humphrey Appleby referred to as salami tactics (slice by slice). In 2015, BDS is hiding behind the same strategy. Promises that call only to boycott settlement products are merely a ‘first step’ with what they refer to now as the ‘stepladder approach’ outlined in stark detail by one of the speakers. I wonder if those aligning with ‘boycott lite’ are aware the cynical goal is to use those waving a banner of ‘ethical shopping’ to eliminate Israel from the map.

Gerald Kaufman got up to speak and quickly announced he would soon be leaving as another vote in the Commons was taking place. Kaufman is a skilled performer and his age adds a subtlety to the strength of his delivery. He only spoke for 10 minutes, but it was 10 minutes I will never forget. He started by reading an email, an email written by a friend of his in East Jerusalem.

(This is as accurate as possible in the circumstances *please note there may be some minor errors* a written version of the full speech is here.)

“The majority of the “attempted stabbing” incidents are based on false claims. They are executing Palestinians on the streets and then they fabricate the stabbing story. Several videos came out after some of these incidents that clearly show those Palestinians killed posing no harm at all but they got shot anyway and some were executed after they were injured on the ground. It is enough for an Israeli to scream terrorist and if you look like an Arab you will be shot dead on the spot. I wanted to say they shoot and then ask questions, but the truth is they shoot and then they fabricate a stabbing story. No questions asked. More than half the stabbing claims were definitely fabricated. The other half, some were true, the others there was no way to tell since they executed Palestinians and no one asked questions. Not only that, they got the point of executing Arab looking people and in the past few days they killed 2 Jewish Israelis and an Eritrean just because they looked Arab. They fabricated a stabbing story to justify the killings before they found out they were not Palestinians. ”

Having suggested Israel is murdering Arab children and then simply making up excuses and deliberately fabricating terror attacks, he ended by saying “That’s life for the Palestinians today”. Telling people that despite dead Israelis and videos of bloody knife attacks, most of the events are fabricated, because Gerald received an email from a ‘friend’ in Jerusalem who apparently had eyes and ears at every incident. Kaufman is a man who can do all this without flinching.

His talk immediately turned to focus on why the Conservative government is so pro-Israeli.

I tried to digest that comment. Jewish money buying MP’s. MP’s not serving the government but serving Israel, and Israeli Jews walking around having bought the British MP’s silence, using innocent Palestinians as target practice. This man is an MP. And he thinks he can say all this because he is Jewish? The term kept repeating in my head. Not pro-Zionist money, not hidden behind some artificial smokescreen, but  good old ‘Jewish money’; ‘Jewish money’ being used to buy silence, so good old Israeli Jews get to kill people ‘at any time’.

Having delivered those sickening comments, Kaufman made a few more comments about the Israelis not ‘understanding morality’, that it isn’t just the fault of the Israeli government but the Israeli people too and swiftly left the building, others got up to speak and soon the Q&A started. It is always when the Q&A session arrives, you get to feel the genetic make-up of the room. Someone made the point that British citizens serving in the IDF should be treated by the government as if they are Jihadi John and one suggested that the Gaza conflict was one of the worst conflicts that has ever been. I heard that there are twinning campaigns between British and Palestinian towns, that the Conservative MP for Bath is ‘being turned’ and may well create a Conservative Friends of Palestine and that we are soon going to be able to buy a British/Palestinian jointly brewed beer called ‘Peace’ at the local pub. And then there was this:

A man describing his motivations, had worked briefly in Israel for Israeli Aircraft Industries and clearly didn’t like it. So much so it was the ‘turning point of his life’ and he has hated Israel ever since. And he wanted to know why no-one was willing to deal with the ‘elephant in the room’

“…which is I think one of the most important questions that you can ask, and that is, “how does Israel get away with it”. And this is a really important question, and I have never really heard an adequate answer to that. Because it seems to me that the answer is always the elephant in the room……. it has flouted 65+ resolutions and nothing has ever been done about it and I come back to the question, and I have never heard an honest answer about it. The most honest answer I have heard so far was when Gerald himself broached on was ‘Jewish Money’. Now it is not just a question of who gives the most donations, what I suggest is people here do serious research and find out how for instance the federal reserve in America came into existence. It came into existence in February 1913 and there was a secret meeting that took place by two (ten?) bankers a couple of years before that and if was sneaked through, so when we talk about money it is important we know who controls the money. That’s where the money is important.”

A room of 40 people, politicians are present and nobody said a word. Actually that is not true, the man was thanked for his contribution. He told people should research, well try it, the only place you will find talk like that is on sites like Jewwatch, Stormfront or Rense (*ALL NSFW*) and the ADL wrote about it as a classic libel.

This isn’t about Israel, this isn’t part of the conflict, this is classic Jewish conspiracy theories, this is NAZI talk. The hidden Jews controlling the world. Jewish money buying permission to kill children. Classic antisemitic libel played out in-public in 2015, politicians present and nobody in the room says a word. I actually felt physically sick. I wasn’t sitting in some dark room in a hidden building in a far away town listening to people whispering amongst themselves, I was sitting on the central estate of one of the greatest democracies on the earth with Westminister Station but 10 meters away.

In all honesty, at the end I felt almost as sorry for the Arabs in the room. It was a sad reflection of their position, MP’s telling them they have no money and the only supporters, either simpleton pacifists or antisemites, egging them on to continue the struggle. This has been the problem since forever, Arabs refusing to make peace, given hope where there is no hope, and in turn this perpetuates the conflict. If instead of suggesting boycott and conflict, their ‘friends’ told them to let go of the more insidious demands, perhaps peace would come sooner. But as is clear from the question on the Federal Reserve, the Palestinians are not the focus of many fighting the Palestinian cause, the Jews are. And the Arabs use the antisemites to bash Israel and the antisemites use the Arabs to bash Jews and another generation of Arab children are born unnecessarily in refugee camps.

And whilst they use all the money they receive to perpetuate the suffering, fight battles they cannot win and maintain the conflict rather than invest in housing, education or infrastructure, Israel grows stronger with each passing year. That’s not the Jews fault at all, and when looking to truly place the blame on the shoulder of those responsible, some of the Palestinians greatest friends should look long and hard in the mirror. That is, if the Jews have allowed them to have enough small change so as to be able to purchase a mirror in the first place.

28 thoughts on “Jewish money. An evening with the PRC, Kaufman and classic antisemitic libels”