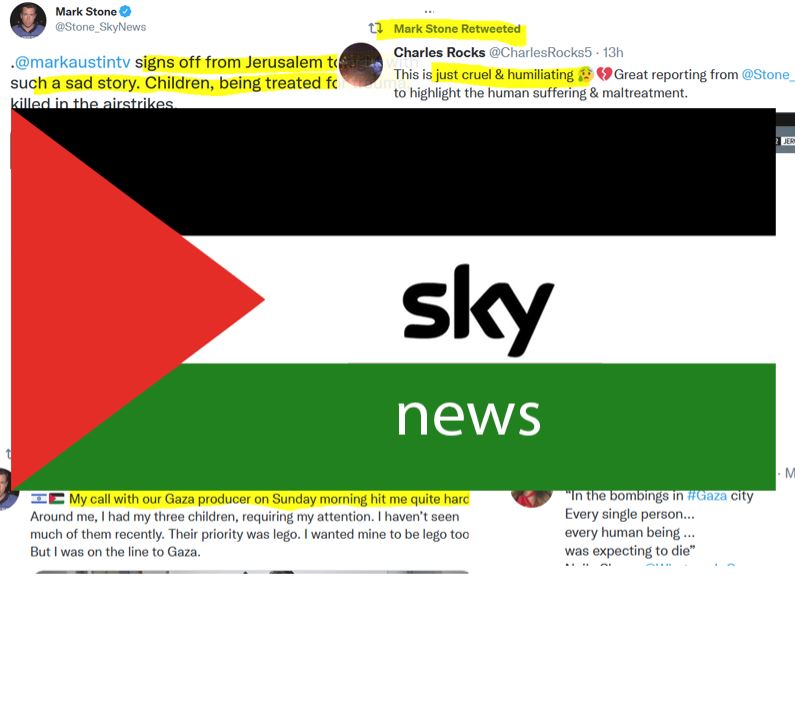 The recent reporting from Sky News in Israel has been shameful, and their Middle East Correspondent Mark Stone has been leading the charge off the cliff. It wasn’t always this way – something seems to have broken in Stone, and his reporting seems to have recently deteriorated into one-sided anti-Israel activism.

Because of the sense of normality Israel tries to retain, despite rockets raining down around it – conflict in Israel is like nowhere else. It presents reporters with a unique challenge – an imbalance and distortion that they must contextualise to remain professional. The very fact they are there, walking around and able to witness these type of protests in a conflict zone – is repeated nowhere else on earth. This context is everything, and Mark Stone has lost it.

Mark Stone and the ‘peaceful protest’

Although this has been deteriorating for days, the public Mark Stone ‘jump the shark’ event occurred yesterday. Stone got shaken and angry. It is visible in both his online posts and Sky News reports.

There was a ‘Day of Rage’ called for by Palestinian leaders.  Both Fatah and Hamas asked for violence, and the ‘Palestinian Street’ was called upon to rise up and confront Israeli security forces. The day started with guns paraded in Ramallah and a thwarted terrorist attack in Hebron. Stone was based in Jerusalem as crowds gathered.

Stone’s reports were all about  ‘entirely unnecessary, provocative behaviour by Israeli police/military.’ Stone produced several tweets of the same nature.

The articles went viral online – as of course, they would. But the key issue in all this is not what his partial understanding of what was occurring might have been, it is in his description of the protestors as a ‘peaceful Palestinian group’. He refers to it as a ‘peaceful protest’ several times.

What on earth does he mean? This group literally turned up to a violent ‘Day of Rage’ protest.

It might be possible to have suggested that the protest ended peacefully – had it done so. It is also legitimate to suggest that the Israeli police reacted badly – if this is what Stone felt that he saw. What no journalist trying to report the truth can do in this circumstance, is refer to a group who turned up to a ‘Day of Rage’ in the middle of a conflict – as ‘peaceful’. If they were peaceful – they would have stayed at home. Period.

There is nowhere on earth that a reporter can do what they do in Israel. When Stone was in Libya, he spent much of his time stuck in his hotel room for safety. This leads us to the next *fact* about the misreporting of events in Jerusalem – and that is the context. Israel is a country in conflict. It has literally had 1000s of rockets fired at its civilians.  The ‘Day of Rage’ involved those who stand in opposition to Israel’s very existence – calling on their public to confront security forces.

Israel is used to such events. It has had to learn to exist around them. Israel is also a liberal democracy surviving in a sea of Islamist despots and terrorist regimes. If these events were taking place elsewhere – it is likely Stone and his colleagues would be banned from being anywhere near the police or protests. It is also highly likely the protests would not be permitted at all. In most circumstances such as this – Stone would voluntarily refrain from going to such a place – out of fear for his safety. No western journalist would stand between the Russian or Chinese forces and protestors seeking confrontation.

Incredibly, Israel has created an environment where it can be both a nation at war – and – a democracy where a protest that explicitly calls for confrontation is still a protected right. It is a unique environment and this is an incredible achievement that is missing from every NGO or journalistic criticism of Israel. It never gets mentioned.

Stone reports on this event exactly as he would if it were a student rally in London. But this isn’t London or Paris and those forces that he criticises, face terror attacks almost every single day they are on duty. They are standing there to literally save the lives of Israeli citizens from the terrorists that seek to kill them. And yesterday they faced groups who had turned up for a ‘Day of Rage’. Stone is producing badly decontextualised reporting.

Left image – Stone witnessed and was shaken by the London riots in 2011. When the report on the riots was released – he specifically highlighted the part of the report that suggested police should have been more robust – to stop them from spreading. It seems when it is closer to home, Stone prefers aggressive policing.

Right image – From riots in Paris in 2018. Stone notes that the Paris riot police used tear gas – but see how he gives them the benefit of the doubt and treats them with respect. He visibly tries to share the blame. Unlike his reporting from Jerusalem where he may as well be wearing the colours of the opposition.

His posts have become a one-sided rant, during which he is reduced to retweeting known hard-left anti-Zionist activists such as Daniel Seidemann and Mairav Zonzsein. In recent days, Stone has even retweeted Chris Doyle, the Director of the anti-Israel propaganda NGO, CAABU. There are no ‘balancing’ tweets on Stone’s timeline, no centre-right or centre-left commentators. This places Stone’s personal choice of political bedfellows as being akin to those who speak at anti-Israel campus events.

I turn to social media accounts because it shows the personal choice of the reporter. This is what Mark Stone *chose to share* with his followers.

Mark Stone has made 12 posts on Facebook about the conflict in total. Three of them were sky news reports, that referenced both sides of the conflict. These were the other nine:

All of these lean only one way. There was not a single FB post from Stone that focused on the suffering of Israelis, the children in the bunkers, the dead civilians or the 1000s of rocket attacks. It was *ALL* about the suffering of Palestinians. 100%.

His Twitter feed is far more active and would allow for a far more balanced view to come across – if he were a balanced reporter. Unfortunately, this is not the case. I went back over the last eighty tweets, and these cover the last 7 days. The bias found is both blatant and difficult to deny. The tweets were categorised:

For context, these are two examples of tweets with an ‘anti -Israel feel. The angle is obvious in both:

These were the findings of the analysis of the eighty tweets:

The difference in reporting style was clear. In most cases, where news was given that would spin in Israel’s favour – a deliberate caveat was added to the tweet. When rockets were mentioned, most of the time it was also mentioned that 90%+ were shot out of the sky:

Here are judy a few other examples

There is nothing balanced about Stone’s reporting at all.

Stone mentions the internal violence once. He retweets a comment about the Jewish attack on an Arab in Bat Yam. The tweet completely blames the Israeli government for all the violence on Israel’s streets:

This tweet is commentary, inaccurate and disproportionate. It is also misleading. We know that most of the violence (not all) was Arab violence against Jews. There is no mention of this, nor a lynching that took place on the same day in Akko – which almost killed the victim.

Stone is pushing a one-sided narrative.

We are used to anti-Israel media. Activists who have donned a ‘media’ vest to push their bias onto viewers. It appears that Sky News UK is dropping into the gutter of ‘activist journalism’ along with the rest of them and Mark Stone seems to be leading them all the way. Stone now appears to believe that he knows how to protect Israeli civilians better than the forces that have been doing it for decades. Given some of the straight-shooting reporting coming from Sky Australia, maybe Sky UK could learn something from them.