Israel is under attack and Israeli civilians are once more being targetted by the rockets of radical Islamic terror groups. 1000s of rockets have been fired at dozens of Israeli towns and cities.  Radical Islamic terrorists are trying to kill as many innocent civilians as they can. This undeniable simplicity makes the betrayal, incitement and irresponsibility of mainstream media, and western politicians – all the more unforgivable.

The story of Gaza is not complicated. The land was due to be part of the Arab state in the partition plan of 1947. It was captured by Egypt during the 1948/49 war of Independence. During the armistice talks, Israel offered to annexe Gaza and absorb all its refugees but the offer was turned down. The area was captured by Israel in the defensive 1967 war and was one of the first areas offered to the Palestinians for ‘self-rule’ in 1994. Following the second Intifada -and to universal applause, Israel completely withdrew from Gaza in 2005, dismantling settlements and giving the Palestinians a chance to provide an example of what they could do with land that they fully controlled. 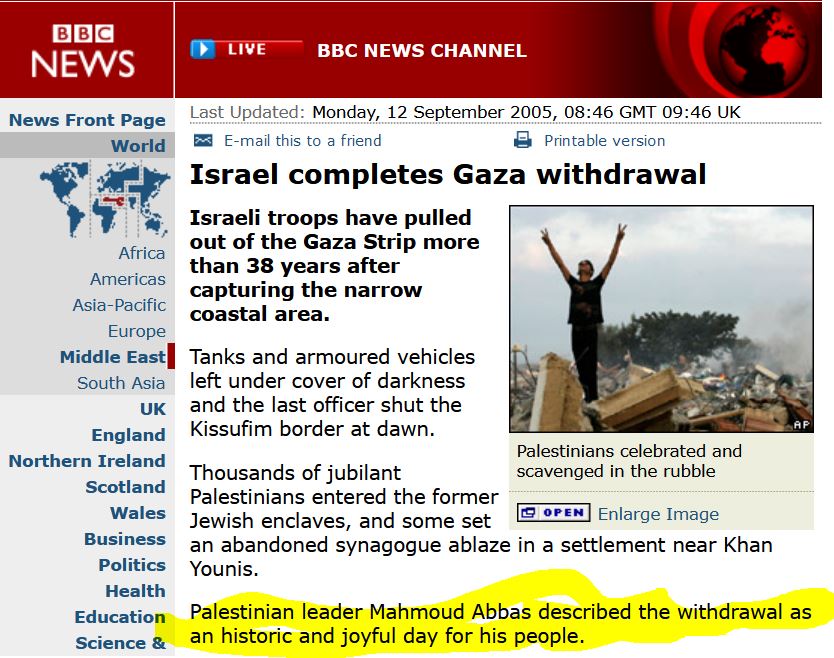 There was hope. Israel built an impressive crossing area at Erez capable of handling 10,000s of daily workers. Plans were put in place for massive industrial estates. The opening of a port in Gaza was agreed upon, there were to be regular convoys to the West Bank and discussions took place over the building of an airport.

The Palestinians had other ideas. In 2006 they voted for Hamas in elections. Hamas refused to abide by any agreements, and Israel, the US and the EU placed sanctions on them. Hamas violently took full control of the strip and Israeli towns began to experience regular rocket fire. This – along with the increasing range of those rockets -has been the story for the last 15 years.

There are two sides to this conflict. The Israeli side – which wants peace – and the radical Islamic terrorists who do not.

We all know what Hamas is and what the radical Islamic terror group wants. They are very clear in their genocidal, antisemitic and bloodthirsty statements.

The total betrayal of the west has been to ignore those facts and the history – and to turn everything on its head. Israel is now blamed for the rockets – as if Israel protecting itself against the terrorists is the cause of the problem. If the 1000s of rockets were falling down on London, Washington or Paris – then Gaza would have ceased to exist long ago. Everyone knows that Israel is acting with maximum restraint – all the time – but not a single western nation or media outlet – is willing to acknowledge it.

Over the last week, only one side has been firing indiscriminately at civilian targets – and they are the radical Islamic terrorists in the Gaza strip.

It isn’t just the hard left. Even more moderate and mainstream politicians are at it. The UK’s Boris Johnson issued a mealy-mouthed statement that appealed to both sides – as if Israel and that vile Islamist terror group are somehow equal.

The truth is that all these leaders are running scared of Muslim populations in their own countries. Look at the anti-Israel demonstrations taking place across Europe. It is no longer just ageing Marxists on the street waving Palestinian flags. At a recent London demonstration, Jewish counter-demonstrators were kettled and then escorted out for their own safety – as the angry mob became too threatening.

Our own media and politicians are offering up Israel as a sacrifice. Trying to maintain a balance between the Jew and the terrorist that seeks to kill the Jew. A strategy of appeasement in the hope that radicals in their own Islamic communities will remain focused on only hating Israel.

They see the angry crowds in their streets – they see the anti-Israel trends on social media – and they simply cave. It is the ultimate betrayal.

From betrayal to incitement

As if the betrayal of Israel was not enough – the actions of those in the west make the situation worse.

The escalating violence is clearly coordinated and has been several weeks in the making. The latest round began with the TikTok attacks on Jerusalem’s orthodox Jews -and escalated all the way through to rockets on Jerusalem and Tel Aviv.

What followed the early disturbances – at the time when it was probably still possible to contain the violence – was truly sickening. Look at this tweet from Nicola Sturgeon:

The tweet was from May 8 shortly after Muslim gangs had rioted in Jerusalem, using Al Aqsa as their base camp. With groups launching attacks on Jews from the religious site, Israel was forced to take action – as any nation’s law enforcement officers would have done. Sturgeon’s one-sided tweet basically ‘green lights’ Palestinian violence – letting them know that they can continue without fear of being held to account. Worse still, her message shifts the argument from a property dispute to a religious battle. It is the rallying cry of ‘save Al Aqsa’ that has been used so many times before and that has led to so much bloodshed.

If Sturgeon does not realise this message will stir up religious fervour, at the very time she should be acting responsibly, she has no place in power at all. It really is shocking that anyone, let alone a Scottish First Minister, would think this message was suitable to share in public.

Every Palestinian action, however violent, becomes excused. Maybe someone will raise the question with Nicola Sturgeon in the Scottish Parliament. If the Scottish police evict several families of squatters who refuse to pay rent – is then a radical Islamic terror group justified in firing 1000s of rockets on the good people of Glasgow and Edinburgh? Or would she treat that case differently?

Sturgeon was not alone. The ‘storming Al Aqsa’ narrative was the trending one, with politicians and media falling over each other to use words that can incite – not just those rioting Arabs in Jerusalem – but devout Muslims in their own neighbourhoods.

Once the false narrative of ‘storming Al Aqsa’ had been adopted and spread by the press and politicians, there was absolutely no reason for Hamas or Islamic Jihad to scale back the violence. Why should they – after all, they were being violent and Israel was getting all the blame. As long as the media lens is on the Israeli policeman using force to quell the violence, rather than the rioters – the riots can continue without political cost. The riots can then become rockets. And all the while, with these outlets spreading lies, they were raising religious tensions back home too.

‘The holiest Mosque in Judaism’

The level of reporting could not be more amateurish – at a time when what we all need most is professionalism. Take this wonderful nugget from the Daily Express:

‘The holiest Mosque in Judaism’ is not a phrase you would expect to see in a national newspaper. The whole Express article is an atrocious mess – but that classic line shows just how bad some of this reporting is. How did that article ever become a published web page?

What was the aim of these people – and there were many – if not to whip up their followers into a frenzy – into mobs that see Israel as brutally attacking innocent Muslim worshippers at Islamic holy sites? Clowns performing before the crowds – wanting to be loved – and selling out the truth and the Jews for a little bit of adoration.

I have lost count of the number of times I have spoken to someone in private who ‘gets it,’ only to see them bow before the public pressure and make outrageous statements online.

Because much of this is a numbers game. There are only 15 million Jews in the world and they are outnumbered by both Muslims and Christians 100s to 1. Footballers, celebrities, mostly Muslims, are using their platforms to call for ‘free Palestine’ – at a time when Israeli civilians are under rocket attack.

Hamas does get the message. So does Islamic Jihad. They fire rockets at Israeli civilians and they can witness the world’s social media coming out in support of them. There is no clouding this issue. We are witnessing a straight fight between Hamas and Israel – and Hamas are the ones with the public support. They even have online armies sending their thanks to everyone who comes out in support. One large happy family of terrorists, terrorist appeasers and Jew-haters.

It is foolish to think the international support does not register in Gaza. What would happen if Hamas exploded in violence and the world demanded accountability from them? Would they reign in the violence if the lens was on them? We cannot answer the question because it never happens. As if reading from a script, Hamas and the international reaction always follow the same pattern – in which Israel gets the blame. Much of it is driven by a combination of the Ummah and western cowardice.

And Jews around the world see it. We are escorted by police at demonstrations to save us from violence. Our children are given additional security at schools. We face untold vile abuse online – little of which appears to contravene the standards of the social media platforms.

What message are Jews to take from all this – if not that our time in the diaspora is done?

Everyone deserves better than this. Even the Palestinians. All this just perpetuates and deepens the conflict. Politicians and the media have completely lost their moral compass. What we are witnessing is a shameful and total betrayal of the truth, of Israel, and of the Jews.

162 thoughts on “Lies, incitement and irresponsibility – the western betrayal of Israel”