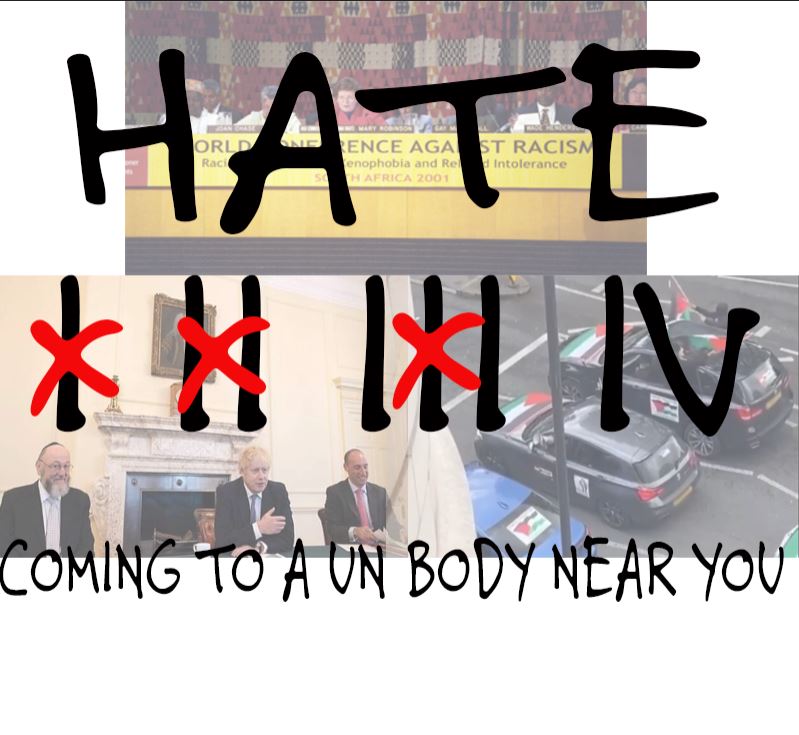 In September, the United Nations gather to commemorate twenty years since the 2001 Durban conference. It is the fourth gathering of its type – hence Durban IV. The original conference in 2001 was a pivotal event in the spread of antisemitism throughout the west. If there is any truth to the Government’s stated position of taking the fight against antisemitism seriously – any truth at all – then it must withdraw from the Durban IV conference – now.

A sinister need for change

There is no doubt that the past few weeks have been traumatic for Jews – both in Israel and in the Diaspora.  Whilst Israelis stood against over 4000 rockets fired at them by radical Islamic terrorists, Jews in the Diaspora were demonised, threatened and attacked (see 1,2 3,4). Whilst much of the world understands there is a correlation between events in Israel and spikes in antisemitism, they fail to correctly assess why this happens. Sympathy for the Palestinians and conflict fatigue blinds them, and they are left pondering issues such as misplaced anger and frustration. The truth is far darker. The core of the  ‘pro-Palestinian movement’ is not about equality or the creation of a Palestinian state to live side-by-side with Israel, but a genocidal desire to wipe out Israel and rid the world of Zionists (90%+ of Jews).

When this movement takes to the streets – what we witness and claim is ‘marginal’, are just visible signs of its true nature.

The two sides, radicals and western peace activists, were rarely speaking the same language – and this was a difficult position for ‘Free Palestine’ that needed to change. The west saw Palestinian attacks as terrorism, today many view them as resistance. A successful shift in perception. That illusionary bridge between the radical Islamic desire to wipe Israel off the map and the western mainstream call for ‘peace’ needed to be built – and that bridge was created at Durban in 2001.

Durban 2001 -A multi-faceted attack on Jews and Israel

It is difficult to overstate the damage the Durban conference did to Jewish people worldwide. Although it called itself an ‘anti-racist’ conference the focus was on attacking Israel, Iran put all its energy behind it, and antisemitism ran rampant in the conference halls. What emerged from Durban was the ‘Durban strategy’, a plan to ‘ethically justify’ wiping out Zionism (90%+ of Jews) and Israel.

The Durban strategy was/is a long term strategy of demonisation and delegitimisation. The aim was, with the assistance of academics and NGOs, to vilify the only democracy in the Middle East – in terms that would sell the process to the mainstream in the west. Building on knowledge gained in the fight against real Apartheid in South Africa, NGOs began using highly politicised language intended to isolate Israel internationally. Terms such as ‘settler-colonial, ‘racist’, ‘apartheid’ ‘ethnic cleansing’ began to appear constantly in NGO output about Israel. The idea for the boycott movement BDS was born. Academics got to work too – producing the ‘academic papers’ this strategy needed for legitimacy.

It worked. Today all those terms appear in mainstream media worldwide. Yet this is not an attack on an Israeli policy or government – but rather one that targets Israel’s soul. All in an attempt to dampen the sympathy people feel when rockets are fired on Israeli civilians and persuade them that Israel is the cause of all the ills in the Middle East. The western mainstream had to be drowned in so many lies and so much distortion that they would eventually believe that the Jewish nation should not exist.

But you cannot attack Israel in this fashion, without vilifying the ideology behind it – Zionism. And when you do this – you attack Jewish identity, remove the rights of the Jewish people and legitimise the violence against them. This is why having swallowed all of the lies about Israel that are circulating, we are seeing a rise in antisemitism globally. It may spike further when there is an outbreak of violence in the Middle East – but the rise is occurring anyway. There is even acceptability or tolerance to these attacks – fueled by what Eve Barlow accurately described as a ‘social media pogrom‘.

The link is there. The goal of the Durban strategy was/is to demonise Jewish identity and justify attacks against it.

Durban IV – the twenty-year celebration is coming and we can see that responsible western governments have been withdrawing. It remains a celebration of antisemitism that threatens Jewish people globally. Australia withdrew, so did the US. Then Canada signalled they will not be attending. There is one notable exception. Boris’s Government – the current UK Government.

The UK must withdraw from Durban IV

David Cameron pulled the UK out of Durban III in 2011. Cameron ‘did not want the UK to be seen to celebrate the anniversary of an event associated with antisemitism.’ This raises a simple question for the current Conservative government:

Do you want the UK to be seen to celebrate the anniversary of an event associated with antisemitism?

There is *no doubt* that this conference will descend into another round of unjustifiable attacks on Israel. Nor is there any doubt it will reaffirm and reinforce the strategy of delegitmisation. This conference will help antisemitism spread further.

We need to make immediate and forceful demands of our government:

Secondly – a demand that any NGO that does participate in these antisemitic hate fests – will not receive government funding. The UK cannot withdraw because they recognise the anti-Jewish racism and still justify funding the activity of NGOs that are connected to it. If an NGO is part of the attack on Jewish identity – they should not be allowed to operate with any public funds.

The UK needs to take the lead. It won’t be the first nation to withdraw, but it can be the first to take a principled stand against sinister NGO activity and participation.

It is no good waiting until later in the year. We must take action now. Contact your MP, Boris Johnson, the FCDO, write letters to the media – contact anyone – do anything to make a difference. Make your voice heard.

There is a direct connection between Durban and the antisemitism we see on our streets. The UK government must not signal any weakness at all or lack of resolve. They have a duty to protect their Jewish citizens. They must withdraw from Durban 4 – and they must do it now.

34 thoughts on “Durban IV – The UK Government must withdraw – NOW!”