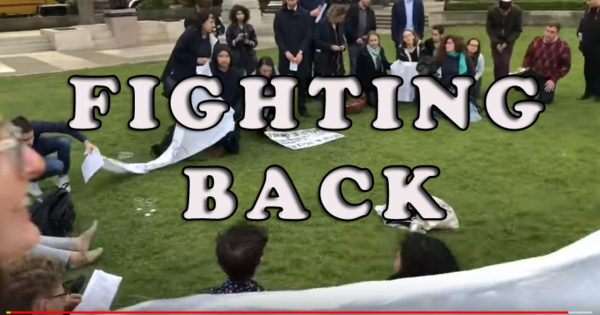 The Parliament Square Kaddish. We have to fight back 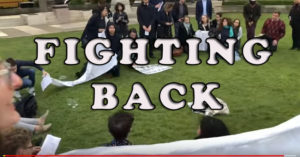 The blog on the Parliament Square Kaddish event was the hardest I have ever had to write. My research has taken me into some of the darkest anti-Jewish movements on the internet. I have got up close and personal with neo-Nazis, Rothschild conspiracy theorists and Holocaust deniers. I have worn a Kaffiyeh, walked with the Hezbollah and broken bread with people who think Jews are ‘evil’ and Israel needs to be ‘nuked’.  Yet after all this, it was reporting on a small gathering of Jewish ‘peaceniks’ saying Kaddish for Hamas terrorists that hurt me the most.

I admit to being angry and sickened by that event in Parliament Square. The act was deliberate, public and provocative. It was designed to create a stir. Those involved have little cause to complain about the publicity they asked for, simply because the publicity they received was overwhelmingly negative. The stunt simply backfired on them.

But these people are still not ‘the enemy’. Those that really wish us harm are numerous and determined and deadly. The people at the Kaddish event are not ‘traitors’, nor ‘kapos’. Nor is there anything malicious in their activity. They are even unaware that they have been infected with a poison that is dripping from within the organisations that are supposed to ‘educate them’. These people are our kids. Our nieces and nephews and cousins and siblings and children.

Looking to put names to faces and then to find those who act as ‘influencers’ was soul-destroying. There was no joy in this. This type of research is one of the things I excel at, but there was no sense of accomplishment when I succeeded. There was only sadness.

Recent events have temporarily distracted me from my ongoing research into the real enemies that face Jewish people. Having said that, I have received more messages of thanks over the Kaddish piece than I have received on any other piece I have done. Even more than the exposure of Jeremy Corbyn in the Facebook Group. This Kaddish action really hurt people. There was understandable anger. It was the sight of ‘our own children’ sitting in that square saying Kaddish for those terrorists who wanted to kill ‘our other children’ – the ones in the Israeli uniform- that really tore at the community. There were also a dozen messages from students who have had bad personal experiences with the blatant political leaning of community organised Israel trips. There is a slow poison dripping that results in actions like the one in Parliament Square.

We are used to receiving ‘two fingers’ as a sign of rebellion from those who are still seeking their identity. It’s okay, we get it. But this simply crossed all acceptable lines.

We have to be permitted our political differences. Not everyone can think alike. There will be Likudniks, those with a fetish for Yair Lapid or people who have nostalgic moments for a strong Israeli Labour Party. There will be those who will affiliate with movements like Meretz. On every issue you will find people both to the left and right of us all. Acceptance of diverse thought and opinion is a bedrock upon which our freedoms are built.

The issue with the Kaddish event was not simply one of political difference. Had these people sat down in a circle, sung ‘kumbaya’ and prayed for peace, I doubt I would even have noticed.

Following Jewish tradition isn’t easy. It means for the most part giving up on the ‘easy choice’. It is easier just to sit with your friends and eat that cheeseburger. Far easier just to say okay to the Friday night party. There are troublesome days when your plans conflict with important dates in the Jewish calendar. And damn those chickens in Asda (Walmart) look cheap. We all make our choices. For the most part the point between what we find ‘comfortable’ and what creates ‘discomfort’ is where the line is drawn.

Living in the Diaspora it is also easier just to give up on Israel. Or even to privately hold it as special but publicly refrain from supporting it. What we are witnessing against Israel is an unprecedented demonisation process that is beyond the realms of basic understanding. An anti-Israel narrative that is based on enemy propaganda and turbo-charged with antisemitism. To counter it requires knowledge and it requires effort. Just like going to the synagogue every Saturday, it is far easier just not to bother.

Sticking up for the truth

Watching scenes of Palestinians protesting in Gaza is not easy either. Even if you believe Hamas are fully responsible for the fate of every single person in Gaza, there are still far too many people who suffer the reality of living there. When Hamas led violence breaks out and people get killed, the thought that there may be innocent casualties should make us all feel uneasy. It creates discomfort. And discomfort is beyond the line that many are willing to accept.

It is easier just to join in the with the crowd blaming Israel, just as it is easier to go to work on Yom Kippur.

Not a personal attack on the Parliament Sq demonstrators

At the event in Parliament Square there was a catastrophic failure of moral responsibility. Too many of the hands involved in this event interact with Jewish children as ‘infuencers’. They are leaders in clubs, they take young Jewish children to Israel on trips. Not one spoke out publicly to suggest the action was wrong. Instead several are left publicly scrambling trying to defend the event even after it became apparent that the stunt had backfired.

I published a blog listing the names of those I saw as ‘ringleaders’, but I remain firmly against all personal vendettas. My intent was to highlight a problem and creating a toxic atmosphere that targets individuals does not address it. These people have been drip-fed a way of looking at ‘being Jewish’ and ‘Israel’ that goes far beyond forty-one naive virtue-signallers sitting in a circle. They really believe they are the ‘good-Jews’. These people act as if they possess superior ‘moral clarity’ and have turned ‘being Jewish’ into a modern universalist fad. They have been indoctrinated to create an interpretation of events that is entirely self-serving. These lessons were delivered from our own community organisations.

The blog I wrote on the Kaddish event set out to show that this is a systemic issue. Personal attacks won’t help anyone. These were not random outliers but integral parts of the community system. There has been a total loss of direction that emerges from within liberal and reform movements.

Fighting for us, not for Israel

This isn’t a fight over Israel. Whether the Diaspora in the UK collapses or not, Israel will still be there. Israel will not stop defending itself from Hamas and Hezbollah to consider the idealistic notions of a small group of young privileged Oxbridge students. As these students actively set out to distance the university Jsoc from Zionism, Jewish people their age in Israel spend those years in military uniforms. At weekends, as students here head to venues like the Plush Lounge, Israelis their age may be standing guard, weapon at the ready. Israelis do not live in the same world as these students do.

If British Jewish students want to create a world vision where they think Israelis not only have choices, but continually make the wrong ones, Israelis will not lose any sleep at night. And if these same British students unite in London to say Kaddish for the very people who tried to kill those Israeli soldiers, those Israelis will see them as nothing but fools. Having our children believe Israeli children are ‘murderers’ doesn’t do anything but reinforce a lie. It doesn’t affect Israel, it destroys us.

These people, those at Parliament Square, are just symptoms of the problem. It isn’t those people we need to be looking at.

We have to fight back

It was our job to educate them. How have we failed so badly? How is it that young Jewish people being educated in community organisations repeat the false narrative spread by our enemies? Why do they weep at the stories put out by the Hamas PR machine and yet call Israeli news propaganda? Why have reform and liberal Jewish organisations let go of Israel, simply to liberate themselves from feeling the discomfort of dutiful adherence to the truth. The truth isn’t the same as some random piece of Shabbat observance. You cannot just let the truth ‘go’ to make life a little easier.

It has become routine now. These people, the ones who said Kaddish, they are the people taking the next generation of Jewish students on tours to Israel. What message will they pass on? We need to address this poison because Jewish people have to be Jewish if Jewish people are to survive. It means some of what we do cannot be the ‘easy choice’. Not every option we take is going to make us feel comfortable.

We have to fight back. We must as Jews stand up and fight for the truth. Even if it means others may not like us for it. We can start by teaching the truth to our children.

Keep up to date, subscribe to the blog by using the link on th

154 thoughts on “The Parliament Square Kaddish. We have to fight back”