Much of my research is about exposing the true face of the Palestinian cause. I see a clear difference between having sympathy for the plight of the Arabs of Ramallah and Gaza and the hate that drives anti-Israel activism. Much of the criticism I face is from those who do not understand this difference. They see a Palestinian flag waving in London and think that it stands for human rights and peace.

A trinity of extremism

Rarely is the true face of the Palestinian cause so easily exposed as it was this week. Three examples are provided – to highlight the dangers – not just to Jews in the Diaspora but to wider society.

Event one. The Palestinian cause on campus

On Tuesday there is an event on campus at Warwick. The University of Warwick has two active anti-Israel groups. One of these groups was actually started by Faculty because the student group wasn’t considered ‘extreme’ enough.  They regularly hold anti-Israel events, there is even one the day before and Monday’s event is all about how to push the Boycott of Israel on campus. On Tuesday they are protesting the arrival of an Israeli, Eyal Dror:

The event description states that:

“The Warwick Jewish Israeli Society is hosting the misnamed Israeli ‘Defense’ Force’s Lieutenant Colonel Eyal Dror, with permission from WarwickSU on Tuesday from 12-1. It is shameful for Warwick to allow an Israeli Lieutenant on campus”

So who is Colonel Eyal Dror? He has been saving lives for years. Not Israeli lives but Syrian ones. Eyal Dror oversaw the operation ‘Good Neighbour’. It helped Syrians near the border who had been caught up in the Syrian civil war. More than 7,000 Syrian’s were treated in Israeli hospitals, 49,000 packages of baby food were delivered, 26,000 medical cases were sent by Israel. Tents, cars, caravans, fuel and generators amongst so much more was all facilitated and sent by Operation Good Neighbour under the command of LTC Dror. His team also led the evacuation of the White Helmets. The man is a hero and the episode of Israeli humanitarian activity during the Syrian civil war is a story that should be heard. Which is exactly why the anti-Israel activists are protesting him. They don’t want the world to hear the truth.

The  Labour Society are co-hosting. A timely reminder of what the Palestinian cause has done to the moral compass of the Labour Party. This isn’t about Palestinian rights or Israeli activity in Gaza- this is a demonstration against a man who saved the lives of his neighbours. The Palestinian cause is not for human rights – it is against an entity – no matter how good or worthwhile that entity may be. Anti-Israel rather than pro-Palestinian.

There was a protest in London on Saturday. An event to demonstrate against Israeli actions. A counter-protest was arranged, which left Pro Palestinian activists and pro-Israeli activists facing each other. Watch this incredible short clip from the Israel Advocacy Movement:

This is what was being sung, openly in Arabic on the streets of London:

You dog only death will come to you

Son of a bastard only death will come to you

You Zionist only death will come to you

They were singing this to the Jewish people who stood across the road. Look closely at the video. Nobody is telling anyone to stop – everyone is singing along. Look at the smile on the girl with the camera. This is the TRUE FACE of the Palestinian cause. A bloody cry for the death of Jews. Across the west, this is the message the Palestinian flag sends to Jewish communities. ‘You dog – only death will come to you’ is being sung to Jews in London. And the flag is waved that was waved so proudly by members at the Labour Party conference.

Then there is this. Another event – to ask people to register for the 2019 UK general election to ‘vote for Palestine.’ 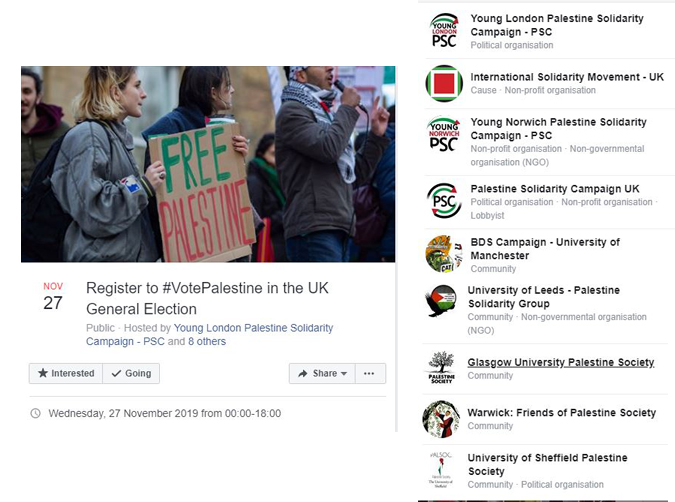 Organised by the Palestine Solidarity Campaign, Young London PSC, the International Solidarity Movement, Young Norwich PSC, BDS University of Manchester, University of Leeds Palestine Solidarity Group, Warwick Friends of Palestine and University of Sheffield Palsoc. Can you imagine what those supporting Corbyn would say – if there was a campaign to get people to register to vote ‘for Israel’ in the UK election? The haters holding the Palestinian cause aloft are hijacking the political argument here. It isn’t about the NHS, education, salaries or housing. You have to vote in the UK election ‘for Palestine’.

This is the ‘Palestinian cause’. It openly calls for the blood of Jews on the streets of western cities. It demonstrates against Jews that save lives and hijacks political parties, turning them into nothing more than instruments to further that hate. Put these three events together and the true face of the Palestinian cause becomes crystal clear. Remember the backdrop to all of this is 400 rockets being fired by radical Islamic terrorists at Israeli civilians. When you stand at the front of a crowd waving a Palestinian flag, those screaming ‘death to the dogs’ stand behind you – and they are just hoping everyone else is as naive and foolish as you have been.

48 thoughts on “Exposed – the true face of the Palestinian cause”