The accusation made here is that the election of Jeremy Corbyn created a toxic environment that has radicalised members of the party and this led to a growth of antisemitism in the UK. There is no need to overthink this. We know that Corbyn comes from a faction that has existed for decades on the fringes of the party. There is ample evidence that *some* of the new membership that joined to support him was antisemitic and extremist. These people were not ‘outsiders’ who ‘infiltrated’, but elements of the leaders own faction who joined to support the new leader.

The new leadership sought to protect its own support base. New media was set up to shield the Corbyn project. Facebook groups proudly shouted out his name. An online environment was created that evicted the dissenters. ‘Zionism’ is Corbyn’s enemy – so ‘Zionists’  were swiftly expelled. Jewish people complained and key Corbyn allies all screamed ‘smear’.

How is a loyal Labour voter to react – especially those who joined Labour because they truly believed in Corbyn as a force for change? As the Labour Party came under attack, ‘Corbynism’ retreated into an ever-shrinking virtual bubble. With a near total rejection of ‘Zionist’ mainstream media, they were reduced to feeding from the scraps of the Canary, RT Today, Press TV or some racist conspiracy junk site from the United States.

Does anyone really believe the average supporter had the working knowledge of Judaism, Zionism and Israeli history necessary to withstand the ideological onslaught?

The Telegraph just ran an piece on this report. The Labour Party responded with a meaningless regurgitated mess that didn’t address the report at all. A wise man would ask how an anti-racist party could dismiss a report on racism that it hadn’t even read properly? But that is not the territory in which this argument is taking place. This message of ’empty smear’ is the one they are deliberately sending to the membership and to the support base beyond. Like a drumbeat – their supporters have been repetitively listening to the ‘Jews are smearing us’ excuse now for over four years.

Most of Corbyn’s key allies put out these messages to suggest that the antisemitism issue is a baseless smear. It is only one of the messages that Corbyn’s allies have used. The protective propaganda campaign is full of these empty phrases – ‘anti-Zionism is not antisemitism’, ‘most Zionists are not Jews’ and ‘some of my best friends are Jewish anti-Zionists’. Anti-Zionism was sold as simply meaning ‘having sympathy’ for the Palestinians, ‘Zionism’ is projected as ‘murdering babies’ and then the Labour support base was asked to pick sides between the two.

Jewish identity was taken apart. The meaning of Zionism was completely rewritten. A tiny fringe that barely registers on the spectrum of the Jewish community was so artificially amplified, that in Labour circles they became the Jewish mainstream. These ‘good Jews’, many of whom have stood alongside and protected rabid antisemites themselves, led a campaign to push back on any attempt to get the party to actually address the issue.

The argument that this had ‘no effect’ is beyond all logical reasoning. For four years, the Labour Party has embarked on a strategy that denies, belittles and ridicules the accusations of antisemitism. Worse still it turns the victims of anti-Jewish abuse into subversive ‘traitors’. Those complaining are ‘paid for’ by the Israeli embassy. Inside ‘ethnically cleansed’ Facebook groups Labour members and supporters alike exist within a revisionist, conspiratorial echo chamber.

Given the way Labour handled the antisemitism cases, this is a logical process that saw the creation of a radicalised environment. This is nothing but the obvious consequence of Labour’s deliberate self-preservation strategy under Corbyn.

The premise of the radicalised Labour member:

Most of the arguments that have taken place about antisemitism in Labour, circle around two central themes. The first is how many of the new members in 2015 and 2016 were antisemitic extremists. The second is the weakness and lack of transparency of Labour’s disciplinary mechanisms. Both these arguments are games that the Labour party comfortably plays and deflects from. What does not seem to be understood is that this is not 2015 or 2016 anymore. It is 2019. Which means Labour’s entire support base has been living inside the arguments over antisemitism for four years. What has happened to them during this time?

The argument presented in the report suggests that this is what has happened to them: 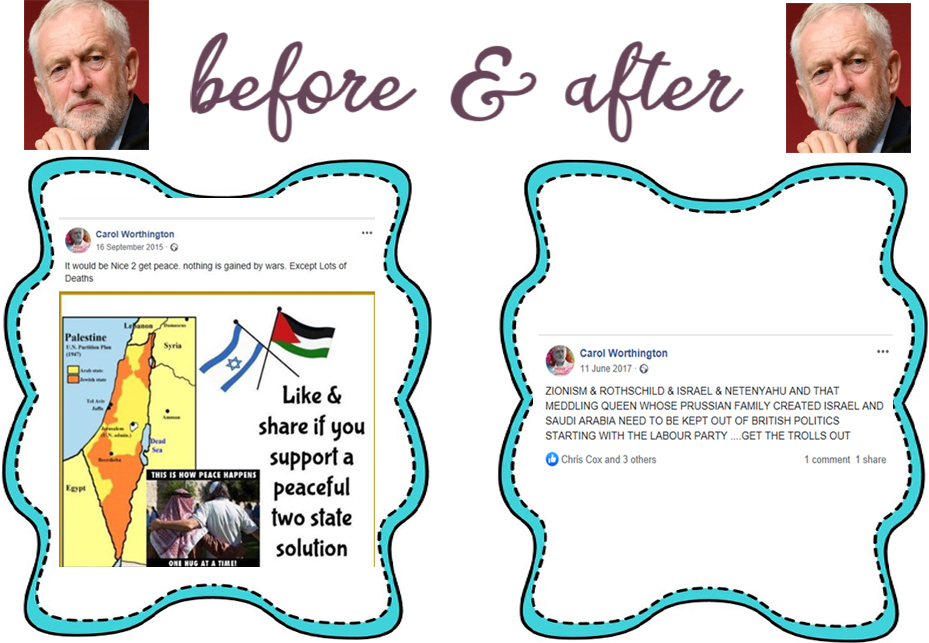 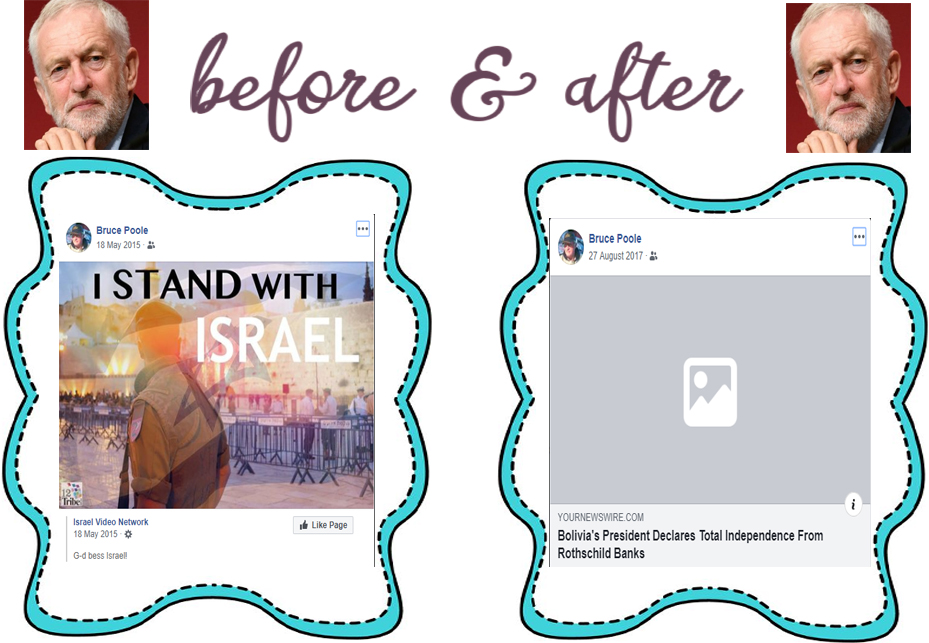 There is no real room for ambiguity here. These are not extremists who entered the party. This is not a ‘pro-Israel’ to ‘pro-Palestine’ conversion. This is support for co-existence and peace turning to ‘antisemitic’ conspiracy. We can see support for Israel turning into sharing rabidly racist and antisemitic websites from the United States. From healthy to unhealthy. This is evidence of a deterioration that occurred, not before they aligned with Corbyn, but after they did. People became immersed in Labour’s toxic enviroment and entered the dark realm of antisemitic and conspiratorial anti-Zionist ideology. Much of it produced by racist, white-supremacist websites in the United States.

During the research I tried to contact many of those inside the report, few responded. Joyce Duncan did. Duncan never publicly posted on Israel or Zionism before she became a loyal Corbyn supporter. This is what she shares now: 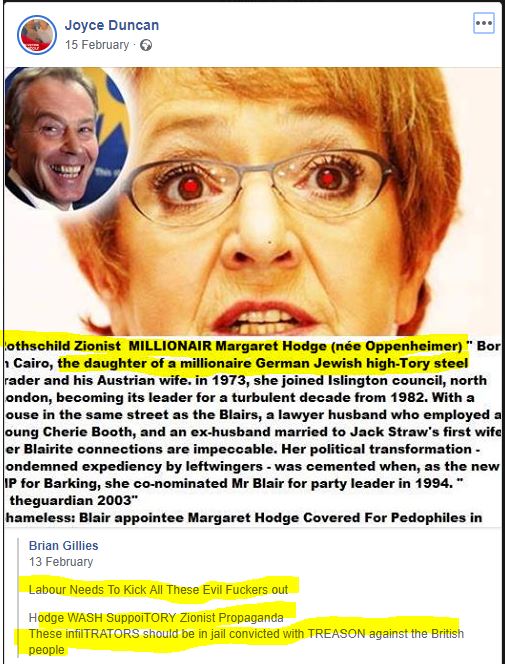 When asked how she became involved in Israel, her answer was plain – Corbyn: 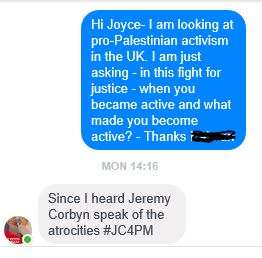 Joyce is only partially correct. The process is explained inside the report, but there are wider issues here. Labour have relied on the strawman that suggests the problem within Labour was inherited or imported. The evidence in the report suggests much of it was self-made. When Labour brush away accusations of Antisemitism by suggesting just a fraction of their membership have been caught – they are being disingenuous. It is their key personnel telling everyone it is a smear. It is their consituency groups hosting witchhunt events. ‘Jewish Voice for Labour’ are a toxic group they empowered. Corbyn’s key allies are the ones who have been playing games over antisemitism from the very beginning. Their members are the admin of the Facebook groups. Opposition to mainstream British Jews isn’t coming from a ‘rebel crowd’ – it is Jeremy Corbyn’s support network.

What message does this send to the wider support base? If a loyal Labour voter is flirting within the same toxic environment that radicalises a member, Labour bear responsibility for their actions too. Simply saying ‘they are not members’ does not work when you realise that the problem has been created by the party itself.

The report looks at the toxic environment that Labour’s own decision making created. There are examples of both extremists who joined the party and those created inside. The attitude of Corbyn’s allies in calling the antisemitism accusations a ‘smear campaign’ is recorded. The empowerment of JVL and the attack on Jewish identity is logged. We can see how the support forums went through a process of ‘dejudaisation’ -ethnic cleasning – and the mainstream Jewish voice was scrubbed from the room. Mainstream media was almost completely rejected as unacceptable and ‘Zionist’. Social media became an ‘engine room‘ for the spread of further propaganda. The obsession kicked in until it seemed like supporters were talking about nothing else but the demon in the room – ‘Zionism’. When placed together it becomes possible to follow the trail from rational left wing peace seeker to an antisemitic conspiracy theorist.

It must also be understood these supporters are not just flag-wavers at conference – they are real people. They work in schools and universities, they are members of unions, sit on panels and make decisions over what is and what is not acceptable. They take the toxic environment outside of Labour and into the wider world. The Labour Party are turning the UK into a place hostile towards Jewish people. Just recently at a mainstream school in Derby, schoolchildren were fed antisemitic propaganda under the umbrella of humanitarian concern. Who signed it off? It is impossible to tell – they never responded to my email. In this environment even asking them to stop spreading antisemitism to schoolchildren is probably viewed as ‘Zionist interference’ paid for by the Israeli government. Courtesty of Jeremy Corbyn and the Labour Party.

You can download the report here: Because of its size it was broken down into smaller compartments. There may therefore be some continuity errors that will be cleared up as they surface:

This blog is unique and I engage in deep undercover research into antisemitism and the lies people tell about Israel. Individual research projects such as the one above can take weeks or months – and is built on years of underlying research. Your help makes all this possible. The work is fully independent, and I have uncovered many key stories on antisemitism on this site. I was recently named as one of the J100 (‘top 100 people positively influencing Jewish life’) by The Algemeiner. If you can, please consider making a donation towards the ongoing research.

You can make PayPal donations using the donate button above or at my paypalme page. I have also opened a Patreon page that gives the opportunity of small monthly donations. Every contribution is truly appreciated.