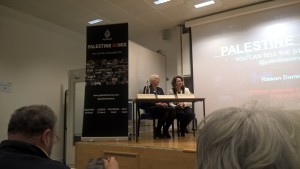 I spent 7 years studying at Birkbeck in the centre of London. I took a 4-year BSc, received a distinction on a 2 year MSc and spent an additional year doing post graduate modules in Law. Last night, on 31/03/2016, my connection with the university was irrevocably shaken.

I attended what had seemed like a relatively harmless event, with Palestinian documentary maker, Rawan Al-Damen promoting the Al-Jazeera propaganda project ‘Palestine Remix’. It ended up being one of the more disturbing events I have attended.

Supported and promoted by the Middle East Monitor, the evening began with a single handout, the Spinwatch/Middle East Monitor investigation (attack) on The Britain Israel Communications and Research Centre (BICOM) from 2013. As this is neither new, nor on topic, one wonders why this was the information the organisers felt the delegates ‘must have’ to take home with them.

The event started and the ‘Palestine Remix’ product itself is impressive. The technology behind the website allows for the user to engage with documentary evidence, search videos using text references and then take the chosen excerpts to share on social media, download or to ‘remix’ into a bespoke documentary. All available in several languages. ‘Heady stuff’.

And they want to push this as an education tool in our schools and in our universities. Coming just a day after I attended a dire Zionist event, this highlights the gulf between the tired, lifeless, self-indulgent Zionist leadership in the UK and the fresh, innovative and spirited defence emerging from the Palestinian side. And a useful tool it would be too if it were not total propaganda. Al-Jazeera has delivered an instrument of total historical revisionism. The timeline of 1948 does not include a single violent Arab action. This, the underlying distortion in the Arab narrative that turns a bloody civil war and a battle for survival into a one sided and brutal rout.

There is even a documentary about Moroccan Jews who describe Zionist actions that ‘conned’ them into fleeing Morocco. As hundreds of thousands of Jewish Arab refugees were created through persecution and expulsion, this website passes it off as a self created ‘Zionist plot’.

Rawan Al-Damen relies on the exception/rule strategy that fuels the entire Palestinian propaganda machine. They take the rule (Arab violence and rejectionism) and make it look like an exception whilst taking the exception (Israeli extremist action) and make it look like the rule. This way, they get to turn the entire story on its head and the victim becomes the aggressor. This piece of software should get nowhere near children or students, it is a brain washing machine.

Alongside Rawan Al-Damen, stood Sue Wolstenholme from Ashley PR. Sue was apparently attending to instruct people about the PR aspect of selling the narrative. How to ‘spread the word’. Ironically, whilst standing on a stage with some of the best hi-tech propaganda I have seen, Sue suggested propaganda doesn’t work. Whether this woman is naïve, stupid or driven by her own hatred I cannot be sure, but to stand on the stage and push this as ‘balanced’ (yes, she used that word) simply puts aside all sense of justice. My own wife’s family was expelled penniless from Egypt.  Isn’t it funny how the justice these people and those pushing the BDS movement constantly seek never includes justice for anyone Jewish.

And talking of Jews, Sue Wolstenholme had another surprise for us all. During the Q&A session a question was asked of Netanyahu, basically asking ‘how the international community let him get away with it’. Sue’s answer was to the point:

“The politician’s needs are not what they should be in their identification of the problem. And therefore Benjamin Netanyahu represents money because of the Jewish populations in the countries concerned, who are business people and all sorts of things like that. So it isn’t about friendship.”

Once again my role as a Jew in the UK is misunderstood. Personally, I have a hard time paying for the upkeep of this simple research, but somehow as a Jew, I am rich, a ‘business person’ and responsible for Netanyahu ‘getting away’ with whatever it is he is meant to be doing. Our money is once again buying the silence of UK politicians. Not Zionists of course (of whatever religion), or people who may have a capitalist, democratic, or value based affiliation with Israel, but specifically Jews.

And then I thought it was over. Only it wasn’t. Upon leaving I passed once more by the registration desk, and this time there was one other book on sale:

“The Political Thought of the Islamic Movement Hamas” by Khaled Meshaal.

What the writings of the leader of a proscribed terrorist organisation was doing inside Birkbeck I have no idea, but the organisers clearly felt that having knocked BICOM and having blamed the Jews of the UK for Israel’s actions, the delegates were in need of some Hamas ’refreshment’. And for the bargain price of £3 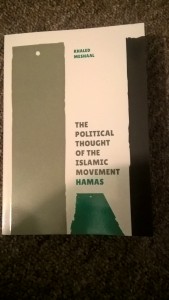 The book has a whole section on resistance. This a short excerpt:

“Hamas… is part of a blessed chain which has continued for over a century taking in all its revolution, icons and leaders: Izzedin al-Qassam, Haj Amin al-Husseini, Fahran al-Saadi and Abd al-Qadir al-Husayni and the others who led great struggles despite the adversities of the time”

These are more details of the people being praised:

I do not need to detail the entire book, a book that explains away acts of utter horror and barbarity. A book that places the UK, US and Israel on one side and the ‘Ummah’ (the whole community of Muslims) on the other. A book that talks of Israel’s ‘inevitable’ demise.  Nor do I have to. This is a book written by the head of an organisation that sent terrorists onto buses, into malls, into clubs and justifies it. This is a man who leads a group that was responsible for a bombing at a tourist pub, where I personally lost a good friend. A man responsible for attacking Israel the way the UK was attacked in 7/7, the way Belgium was attacked, France and the US.  Why was this book for sale at this event in Birkbeck?  Doesn’t PREVENT have any teeth at all?

Just what exactly did this book have to do with the evening? As always, there is the face of human rights, the face of equality, the face of fairness, but behind it all lies a mask of Islamic radicalism and terrorism. This is insidious. It is not just dangerous revisionism. Last night someone pushed a one sided narrative that takes every Israeli action out of context, this was followed by someone suggesting that the Jews of the UK clear the way for unjust Israeli actions and then to wrap it up you can read Khaled Meshaal justify all forms of ‘resistance’.

Thank you Birkbeck, I am a Jew in the UK and you just made my life that little bit less safe. It is time that universities were called to account for what they are nurturing, fostering and promoting.

14 thoughts on “Jews and Hamas propaganda at Birkbeck”