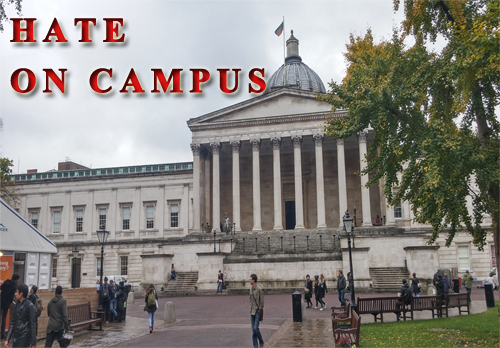 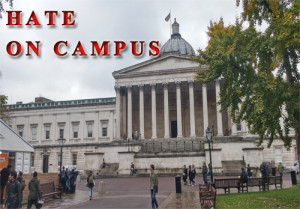 At what point does a university assist in inciting and supporting violence? How about charities and NGOs that are supposed to be on a mission of peace? These are questions I was left asking myself after recent events at both the University of Kent and UCL.

The latest event in Kent, involved a speaker from the charity ‘War on Want’, Ryvka Bernard. Ryvka is listed as the ‘Senior Campaigner on Militarism and Security’. Forming part of the university based ‘Israeli Apartheid Week’, Ryvka’s talk was titled “Boycott, Divestment and Sanctions: Responding to the ‘Palestinian Call for Justice”.

Ryvka’s presentation was devoid of historical fact and context. I was accompanied to this event by an ex-student from Kent, Natacha Woodcock, and together we raised several issues about BDS that exposed much of the hypocrisy. When questioned, Ryvka only appeared comfortable sticking to the script prepared by the slick PR of the BDS campaign. At one point I brought up the 1947 partition, only to find out that Ryvka wasn’t even aware the Arabs rejected it. Worse still, when someone in the crowd displayed their own ignorance by suggesting the rejection was a ‘mutual affair’, Ryvka pushed the point that ‘yes, this is the way it happened’.

A personal note to Ryvka: you do not know what you are talking about. Whether you did it through ignorance or not is irrelevant. You spread disinformation amongst impressionable students about one of the defining moments in the conflict. Your ignorance not only helps to create and spread irrational hatred, it tears up your own argument that your cause is one of ‘justice’. How can you deliver justice without knowing the facts?

When discussing ‘Palestine’, Ryvka Bernard, like ‘War on Want’, uses the word ‘justice’ a lot. It is entirely misplaced. A movement that uses a false narrative to inflict a punishment on another side without stopping to check the accuracy of the events is not a movement of justice. A force that only pushes one side’s argument whilst deliberately ignoring justified grievances from the other party has nothing to do with fairness. BDS isn’t about justice at all. BDS is a movement of hate and revenge.

Given this, you have to ask how a movement such as BDS is allowed on campus and why funding from the Big Lottery Fund and Comic Relief ever gets near an organisation such as ‘War on Want’.

This event at Kent however at least acknowledged the partition plan existed. Just a few days later I was at a different event at UCL to hear an entirely different narrative. The event at UCL took place just a few hours after the student union on that campus voted to support BDS. This time, Amnesty UK rather than War on Want were present. Although Amnesty UK did not deliver this particular speech, by their presence at the event, Amnesty give credibility to the demonization process. Amnesty therefore also support the spreading of lies to create hate.

Hazem Jamjoum, had arrived at UCL to describe for the students the history of the Zionist project. I’ve seen Hazem talk before and know he has no compulsion to stick to facts at all. Therefore, I am not going to address individually the long list of misrepresentation and distortions made during his latest speech, but rather focus on his comments regarding the time period of the partition plan, 1947.

Hazem’s narrative was simple. It is 1947, the Zionists have failed, so to create their state they invent a plan to forcibly remove the inhabitants of the area.

It is almost impossible to overstate the falsification occurring here: It is late 1947, the partition has been removed entirely. It never happened. The Arab rejection – never happened, the civil war – never happened. This is a tale of Jewish barbarity, the Jews, having ‘failed’ in their attempts at creating a state embarked on a one sided military episode that was designed to cleanse Palestine of non-Jews. This distortion is taking place *on university grounds* in the UK with the support of Amnesty UK. If someone learns to hate Jews from these fake stories – whose fault is it? Is that what we want taught at university?

You can listen to this section of the narrative here:

Throughout history ‘justice’ has been used as an excuse to perpetrate some of the gravest injustices mankind has seen. Unless the process for justice is untainted, unless the singular focus of the system is an adherence to truth, then BDS simply replicates historical examples of violent and brutal mob rule.

I would argue that universities are blind accomplices to this rising hatred on campus. Bastions of diverse thought, they seem unable to handle those that use words of peace to push hatred and war. As a vile movement spreads its tentacles around the throat of campus tolerance, the powers that be have neither the will, nor apparently the tools, to defend against the predator. In the meantime, the hatred spreads unchecked, and the moderate, and truly peaceful voices, are suffocated into silence.

Place irrelevant theory of what is equal and what is not to one side, the antizionism on campus deliberately distorts history to create a demonic vision of the Jewish state. This antizionism’s claim to be different from antisemitism is dependent on several factors, not least, in adherence to a narrative containing factual events. When the movement disseminates a highly selective and clearly false historical rendition, when it intends to create hatred towards the only Jewish majority nation through a corruption of the truth, then the movement itself has crossed a line from which there is no return.

Movements such as War on Want and Amnesty have become willing accomplices to this new hatred. As the only nation with a Jewish majority is demonised on campus, those that seek to support Israel are demonised too. In effect this creates a good Jew / bad Jew scenario amongst Jews in Europe and the US. Sure the BDS mob can claim they don’t hate ‘all Jews’, they just hate the Jews that happen to support the Jewish state. They then lie about why you should hate the Jewish state in the first place.

These people aren’t giving an opinion, they are deliberately distorting the truth beyond recognition. They turn the victim into the aggressor by deleting every single relevant fact from the narrative they tell the students. They know they are lying to UK students, but they also know that nobody seems to care. This distortion perpetuates a conflict and removes all motivation to seek a peaceful solution. Worse still it emboldens the extremists, invigorates the terror movements and inevitably leads to more blood being spilt on both sides of the great divide.

It is time to ask for the truth. It is also time to ask why this lynch mob are even given a microphone on campus. And just as importantly, why are their supporters like ‘War on Want’ actually given lottery funding?

5 thoughts on “Lies and more lies. Raw hate on campus”