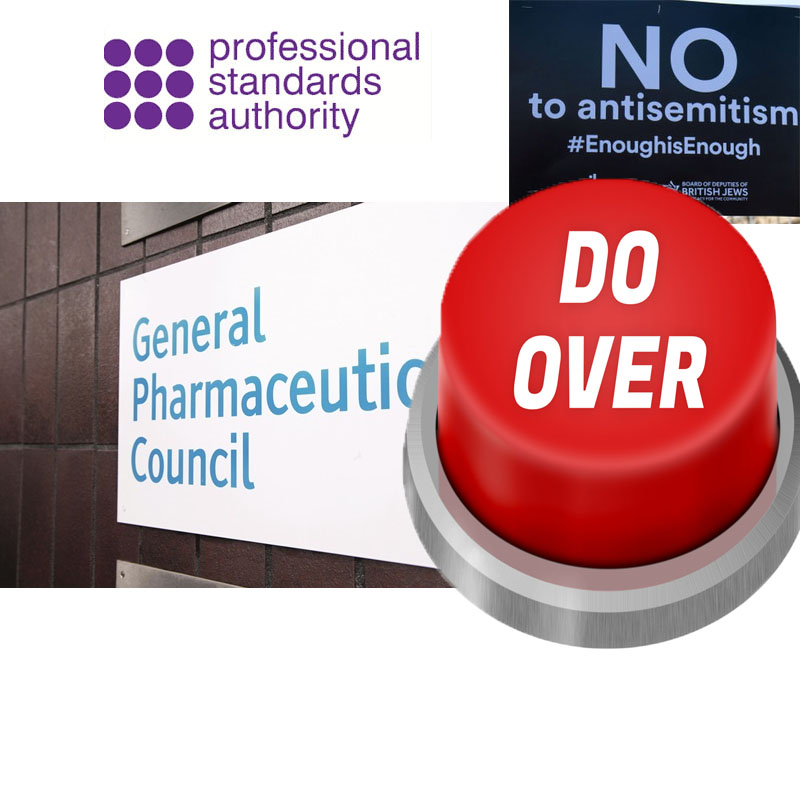 A win for the whole Jewish community – make no mistake

2020 may have been a bad year for almost everyone, but it is ending on a note that gives the Jewish community in the UK something to celebrate. On Friday I received an email that contained a decision from the Professional Standards Authority on the Nazim Ali ‘Al Quds’ antisemitism case.

The Professional Standards Authority decided that the General Pharmaceutical Council’s Fitness to Practise Committee erred in its approach to antisemitism and referred the decision to the High Court. This is important and welcome news.

Nazim Ali is well known to those in the Jewish community fighting antisemitism. Ali has been a visible face of anti-Zionist, antisemitic activity, fronting the Al-Quds day march for years. But it was his public remarks at the 2017 Al-Quds demo, about ‘fake Jews’, Rabbis, the Board of Deputies and Grenfell, that led to the complaints about him to the General Pharmaceutical Council.

It took three years to organise and in the end, the hearing by the ‘Fitness to Practise’ Committee of the General Pharmaceutical Council was a complete whitewash. The Committee was not interested in witness statements provided by Jews,  nor did they pay any attention to the IHRA definition of antisemitism. In the end they dismissed the antisemitism charges because the Committee did not understand what the comments meant and couldn’t be bothered to take the effort to find out. It was an exercise in colonial, supremacist thinking that tried to find the middle ground between the racist and the victims.

After the decision was made public, UKLFI, as early as the 16th November, wrote to the Professional Standards Authority to notify them of ‘serious concerns about Nazim Ali decision’. Others involved such as Jonathan Hoffman also turned to the PSA. On Friday the PSA gave their response. The Committee had ‘erred in its approach’ to antisemitism. They have referred the case to the High Court to quash the judgement – they want a do-over – this time conducting a hearing that deals with antisemitism properly.

The absurdity of the Nazim Ali story

Muslim leaders have often used the religious struggle as motivation, trying to turn the conflict into a religious war. ‘Save Al Aqsa’ is a cry that has led to untold violence over the past 100 years, not least the 1929 massacres in places such as Hebron.

Nazim Ali’s family were from India, where parts of his family were massacred as Muslims during Partition. Eventually in the 1960s his family came to the UK. From the depths of poverty in Asia, Nazim Ali is a British Pharmacist, a product not just of his own drive and determination, but of British opportunity, equality and acceptance.

But Ali carries religious struggle with him. Evidence of some deep problems with multicultural ideology, his focus is not on the universal state of human rights in the UK or the wider world. The main thrust of his activity is not even related to his personal family history, such as the struggles of Muslims in India, nor on the desperate human rights struggle of the citizens of Pakistan. As a Shi’a, he does not even focus on the persecution of the Shi’ites in Sunni dominated areas. Nazim Ali has spent his adult life aligning himself with the extremist ideology of the Ayatollah, standing by the flag of the genocidal radical Islamists of Hezbollah and fighting for a single cause – calling for the destruction of the Jewish state.

The Ahmadi’s are a persecuted minority group in Pakistan. This is what Nazim Ali had to say about them:

The Ahmadi position is of religious acceptance of Israel. Nazim Ali is explicitly calling for discrimination based on religious belief. Not equal but inferior – Dhimmi– second class citizens to be discriminated against because they do not ‘conform’ to his version of Islam. An Islamist supremacist. This is not a human rights activist by any definition. His focus is a religious one as is the choice of his target. There is no way on earth to logically see his activity against Israel as anything other than antisemitism. Nazim Ali sees ‘Palestine’ as Islamic land that must be freed from the hands of the Jews. He is not pro-Palestinian, but anti-Jewish.

It is targeted religious hatred – and against the Jews, that is clearly antisemitism. To choose to see it differently is to err in your approach. Those vile public comments he made in 2017 are part of his core belief system.

A message about the Jewish Community sent far and wide

It would be wrong to underestimate the importance of the PSA decision, even though so far they have done nothing more than demand that the Committee be sent back to the drawing board. Their decision will carry a message far and wide. The days of Jewish Community silence in the face of official whitewashing of anti-Jewish hatred are over. Professional bodies that sit to discuss antisemitism can no longer take the easy route of sweeping it under the carpet. We are watching. The Jewish Community responds now with a strong voice and demands proper and fair treatment and accountability. We have learnt from the mistakes of sitting in silence as antisemitism fed through the veins of the hard-left.

The call has been heard. The Government has adopted the IHRA and is pushing for its adoption wherever it is needed. If someone stands up today and makes vile, inciteful, antisemitic comments in public – we expect them to be dealt with. The PSA decision is clear – you don’t dismiss the voice of the Jews or belittle antisemitism when dealing with hatred against them. Other professional bodies will take note of this. It is an important win.

Taking the credit for the Nazim Ali decision

I always view these events as the success of Jewish community action. They show what we can do when stand together and fight for justice. It is sad to see some in our community driven by a type of Napoleon Complex, rushing to the top of the hill boasting that it is all their work. Rushing to take credit has never been my style. Given what we achieve when we all pull together – we should hold hands to celebrate as a unit – taking time to congratulate each of those that played their part. By taking this route, these insecure players belittle the enormous work others have put in, creating resentment around them as they do so. Fracturing the Jewish Community when unity is our most successful strategy.

This success isn’t the result of a single organisation or person. There are the visible players, those like myself and Jonathan Hoffman who played back and forth with the General Pharmaceutical Council for years and in the end were the key (and only) witnesses at the hearing. It was a frustrating, and difficult process. Many silent players are always a major part of the effort. After I wrote my piece, I was contacted by several Jewish pharmacists -who were outraged at the decision of the committee. Each of them followed up with official complaints. You don’t know their names and probably never will. In fact, much of the intermediate work that goes on is never spoken about publicly. The Jewish community has many unknown heroes.

Our grassroots movements are dynamic and infuential. The Jewish press applies pressure through constant exposure. For example, in the battle against the Labour Party, Stephen Pollard, Chief Editor of the Jewish Chronicle, never faltered once in those four years. Few realise the importance such Herculean efforts had on the eventual outcome. Then there are the indispensable efforts of those like UKLFI, hard-working, specialist organisations that never grandstand. Operating chiefly behind the scenes, they report outcomes as ‘factual statements’, rather than publishing them as a declaration of ‘how great they are’. Professionals to the core, they would never boast about it, but UKLFI played a major role in this latest success.

We have won a key battle. Now there will be another hearing. And this time we have to make sure our complaints are dealt with properly.