During the Channel 4 news on Monday, they ran a segment about Palestinian voices in the UK. Because of the disinformation and propaganda contained within, there has since been an uproar about the item and several complaints made to OFCOM. This is how the piece is described by Channel 4 News:

The news team ran a segment *made* by a pro-Palestinian activist. As a student, Akram Salhab was the student coordinator for the Palestine Solidarity Campaign. He is a hard-core anti-Israel propagandist. Predictably the segment was full of some truly ludicrous distortion and lies.

Camera UK have covered the numerous historical errors in the piece. The non-factual, misleading narrative alone makes it inexcusable that Channel 4 ran the piece, but as you will see there was more to this than just ahistorical poppycock.

During the short film, Akram Salhab sits in a room with several ‘Palestinians’. The audience is only told they are ‘Palestinians living in Britain’, as if they are ordinary people taken from the street. Except of course they are not ordinary Palestinians at all. We heard from three of those in the room – I have managed to identify two of them.

The first person we meet is ‘Rama’. Except we are not told Rama Sabanekh is also a hard-core activist. Her Facebook timeline is full of endless propaganda. For several years in London, she was at SOAS and could be seen at the front of many of the anti-Israel demonstrations. Always with a megaphone in hand leading the chants, she ran for the office of International Students officer at SOAS in 2017. The image on the left should give you some idea of her activity: 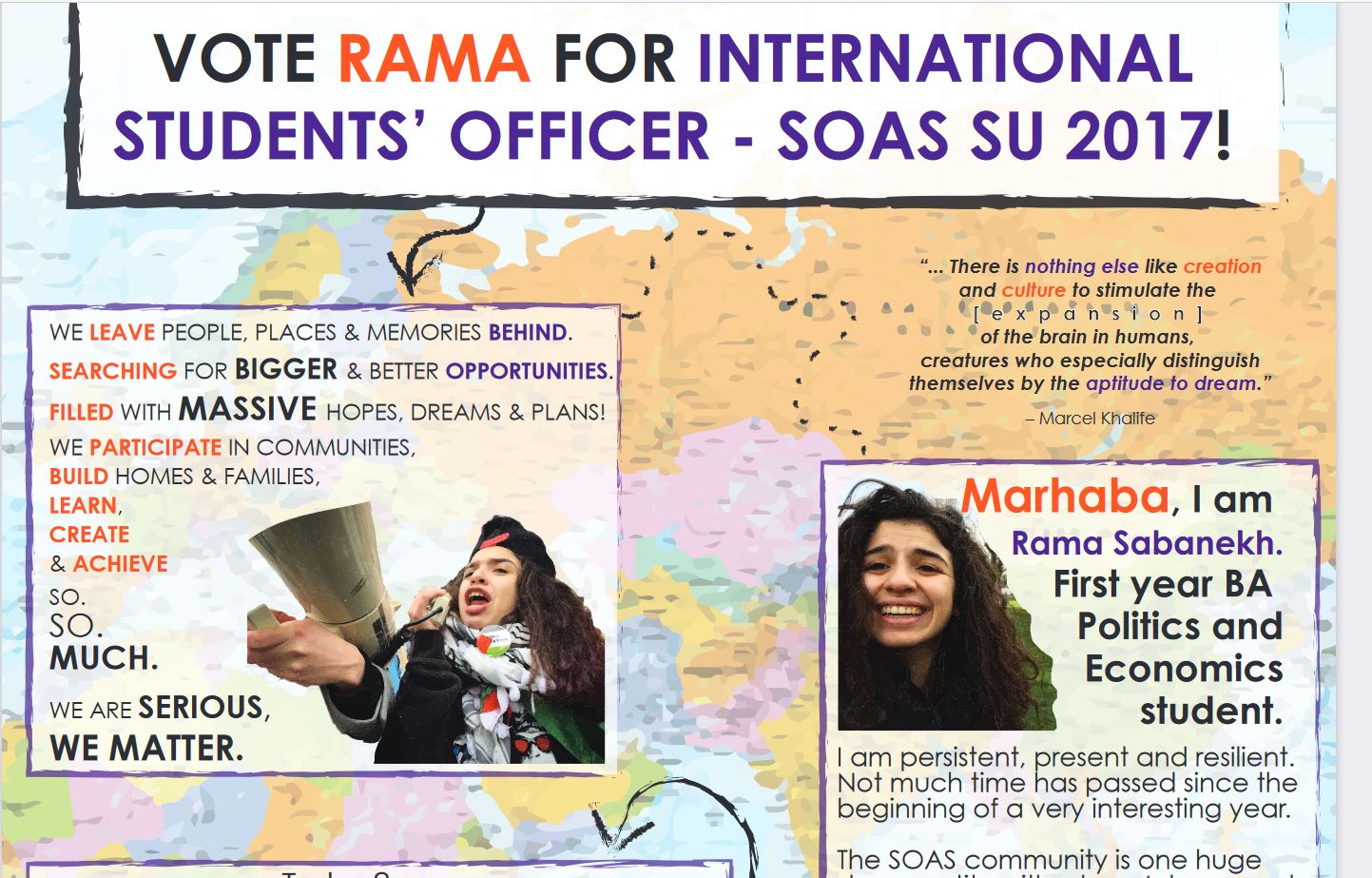 Sabanekh was one of those proudly leading the protest against Hen Mazzig at UCL which turned violent – and at which Jewish students needed a police escort to safely extract them from the building. It seems she doesn’t want all voices heard: 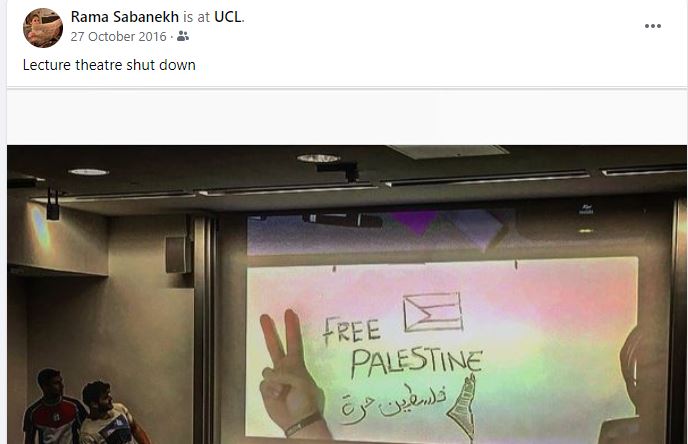 If you pick any demonstration of the time, (like this one) she is at the centre of it. She complains her voice is not heard. Which voice does Sabanekh think should be on mainstream media – is it the one that compares the situation with the Palestinians to the Nazi Holocaust? 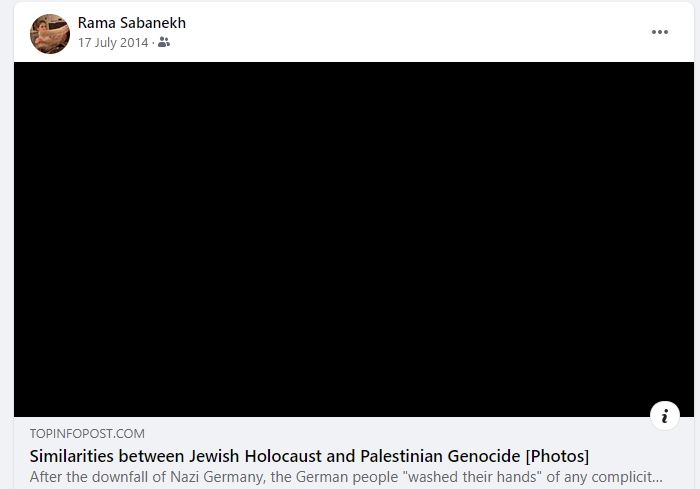 The link above was from a now defunct rabid conspiracy website.
Maybe the voice Sabanekh  wants everyone to hear is the ‘from the river to the sea’ chants she would sing at demonstrations? Or perhaps the voice where she says that diplomacy will never work and that she supports ‘resistance and revolutionary violent pressure to the Zionist occupation by all means possible‘ (Extract from F/B post Nov 2017).

Here is Sabanekh, posing for a picture with her SOAS colleague, Hadi Nasrallah. It was taken at the anti-Bibi protest in Febraury 2017. Nasrallah is a pro-Hezbollah, pro-Iranian extremist: 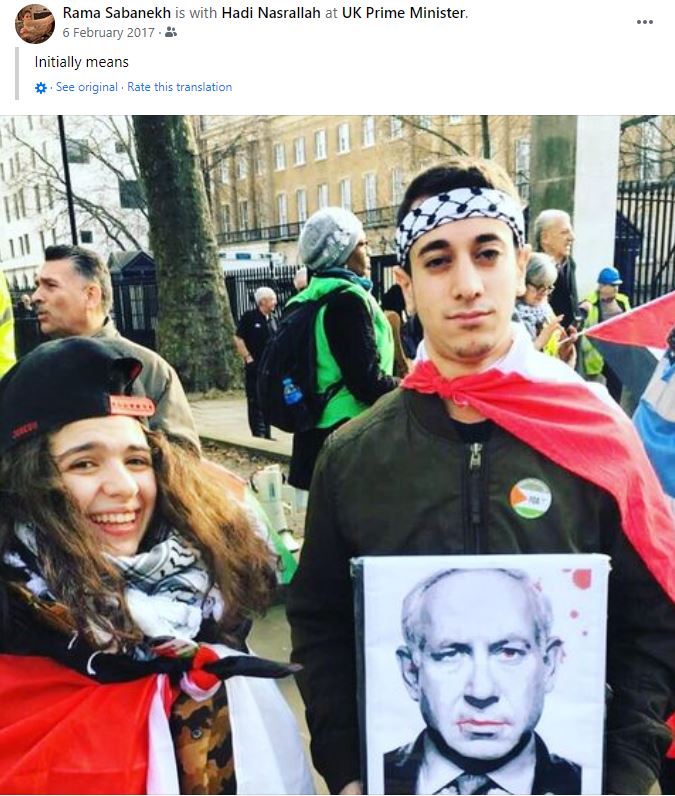 This is what Channel 4 are secretly promoting. It is obviously no coincidence Sabanekh was in the circle, but she was not alone.

We are also introduced to ‘Ziad’. He goes to Oxford University. Ziad is not your everyday British Palestinian either. Al-Qattan is currently serving as an intern for Al Shabaka,

Al Shabaka is a professional Palestinian propaganda outfit. The board consists of people like Noura Erakat. Yara Hawari is one of Ilan Pappe’s success stories from Exeter and is the Senior Analyst at Al Shabaka. Yesterday Hawari tweeted to promote the Channel 4 clip. In turn it was retweeted by Al-Shabaka. Neither of them bothered to highlight that their own intern was involved. Maybe they didn’t want you to know. 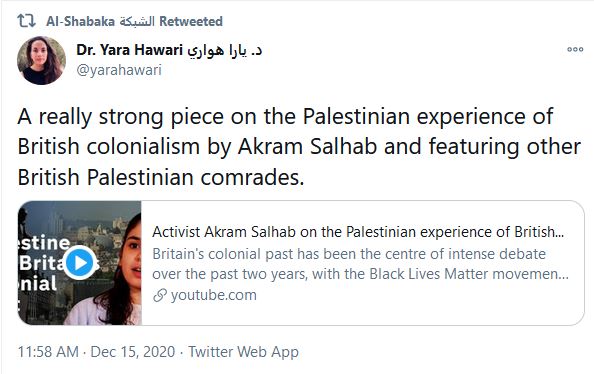 One of Al Shabaka’s key donors is Ali Abunimah, the co-founder and executive director of Electronic Intifada. This is perhaps the voice that Ziad wants heard on mainstream television. Hard-core anti-Israel propaganda.

Channel 4 clearly gave the extremist ideologies of outlets such as Electronic Intifada a platform with which to dupe viewers. Sorry Channel 4 News, but you are well and truly busted.

Three other points worthy of mention:

The poor woman with the NYT write-up

We got to hear from Joudie Kalla, who wrote a book about Palestinian Cuisine. Kalla tells us that she is unable to get mainstream press to write a review about her book because it contains the word ‘Palestine’. Except of course she had a write up in the New York and LA times.

This is empty, shameful, lies and propaganda from Channel 4.

One of the most ‘in-your-face’ errors in the piece came when the news item showed a screenshot of part of the PREVENT guidelines. We were shown just a fraction of an image and told these are possible indicators of extremism.

Except in the news item they completely inverted the meaning of the words that were written in the document. As William Baldet MBE, CVE PREVENT Coordinator thoroughly explained on Twitter- to provide the screenshot without any of the text that follows is to completely change the context of the document.  Baldet states quite clearly that the slide content has been misrepresented to imply the *opposite* of its intent. The text literally goes on to say that *it is not extremist* to hold these views if they are not expressed in a way that harasses others or incites violence.

After talking with the Palestinians in the room, we meet Avi Shlaim, who is introduced as an ‘Israeli historian’. Shlaim lived for about 8 years in Israel and he has lived here for the last 54 years. Whether he also has Israeli citizenship is not relevant – he is British. Is this acceptable now, do we ‘other’ people who were not born here and negate the fact that Shlaim has spent almost all his life here? Shlaim got married in Islington in the 1970s. How British does he have to be before Channel 4 identify him as British? Can you imagine them doing this to someone who has lived in the UK for 50 years, but who also carry a second citizenship such as Indian, Pakistani or Nigerian? It is absolutely outrageous that they chose to play this kind of racist ‘othering’ trick, simply to strengthen their own propaganda.

Why are there no voices on mainstream TV? I would argue that Palestinian voices are over-represented. ‘Palestine’ certainly gets a disproportionate amount of attention in the press. If only the Uighurs or Rohingya or Syrians – people who are actually persecuted – were given so much time. But if we are to address why these specific people and those like them are not given airtime, it is chiefly because the media outlets know what they are going to say *AND* know much of it is factually incorrect, offensive and often antisemitic.

You cannot blame the BBC, the Telegraph or any of the mainstream outlets for the fact these people were brought up on myths and are actively spreading propaganda and lies. That they take every opportunity that they can to politicise an event. Why on earth should anyone help them spread their lies?

But I suppose that is the question we now must ask Channel 4.

There is only one course of action that must be taken here. Watch the clip then please complain to OFCOM. Make *YOUR* voices heard.