Many people think that with the election done, the battle is behind us. They use several arguments to rationalise this – chiefly based on the idea that the troublemakers are a small fringe who have been ‘dethroned’. This type of blinkered and naive vision is the same short-sighted, stick-your-head-in-the-sand strategy that allowed for Corbynism to arise in the first place. Even the first wave of ‘Corbynism’ may have single-handedly managed to bankrupt the Labour Party. Our problems are deep-rooted and societal, they won’t just disappear because we want them to. As some of us rejoice and think it is over – the haters are using the defeat to radicalise the troops even further. They have a tried and tested strategy and the leaked Labour report was part of it.

The leaked report is a clear piece of internal sabotage. Corbyn’s allies formulated the report – chose which quotes were for use and which were ignored – and then leaked it. It is undeniably part of a civil war. Then they turn their anger onto those exposed in the report, who they say ‘sabotaged’ the party leadership – but hey, isn’t that exactly what they are doing themselves?

Taking the report at face value or addressing it as a legitimate piece of evidence is an extremely dangerous thing to do and plays directly into sinister hands. It was written not to investigate, or tell the truth, but to shift the blame and deflect the conversation. To suggest that an alliance of those ‘pesky Jews’ and ‘Blairite Zionists’ scuppered our children’s chances for a better and fairer future.  Most importantly, in an act of brazen chutzpah – the story suggests that the reason antisemitism wasn’t dealt with – it was everyone’s fault but the antisemites and their allies.

The Communists used ‘agitprop‘ to spread their message to the masses. This type of propaganda fits neatly into the design. The report – obviously written with the knowledge that the EHRC is about to tear the Labour Party to shreds, is designed to protect the movement from the fallout. All propagandists need is a piece of paper that looks like it says something. The illusion of an excuse or argument.

Reasonable commentators see it for what it is and so ignore it. This is part of the strategic thinking too – they know it won’t be taken seriously by the mainstream. This allows Corbyn’s propaganda machine to claim they are being ignored. It adds to the fuel of ‘us’ against ‘them’ and exposes a media machine designed to protect the ‘Zionist elite’. This plays out exactly like the script.

Report leaked and with the ‘real enemy’ (those pesky Jews) clearly identified, it is time to up the stakes. We should be paying attention because what is occurring is truly frightening. The attempt to ignite a class war clearly failed them, so they now turn their attention to mobilising agitation between the ‘races’.  Activists such as Jackie Walker and Salma Yaqoob have been openly inciting on social media.

Salma Yaqoob has a history of being to the left of the Labour Party, alongside toxic characters such as George Galloway. Like many of the people pushing extremist ideologies, Corbyn’s rise gave them room to enter mainstream Labour Party politics. Salma Yaqoob even ran to be the Labour candidate in the Birmingham Mayoral election. She came third.  Yaqoob was endorsed by those such as Owen Jones, Aaron Bastani, Momentum and Unite – a true Corbynite candidate.

This is part of what Salma Yaqoob just put out on Twitter:

This is a deliberate attempt to create an ‘us v the Jews’ atmosphere amongst BAME communities in the hard-left.  To label the largest Jewish representative organisation in the UK a ‘hostile group’. How can this person possibly be a Labour member?

The petition against the Jews

A petition to stand in solidarity with the MPs- and *all* the expelled Labour Members (which includes many antisemites and several hard-core Holocaust deniers) has several thousand signatures. It explicitly targets the Board of Deputies and Jewish Leadership Council.

If you think I am exaggerating, take a close look at this recent post by Jackie Walker: 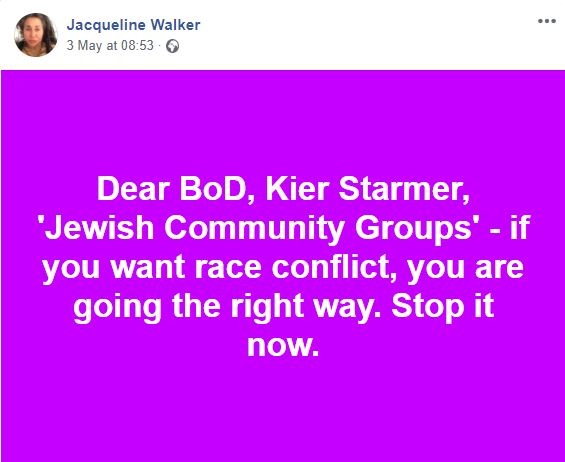 It doesn’t get much more explicit that that. Jackie Walker has been posting relentlessly over the last week on this subject – which left room for this threat of violence to be posted as a response to one of her posts. Someone actually suggested bombing the ‘BOD’:

An online sewer of hate

A few days ago, some Labour MPs joined a Zoom call alongside prominent expelled members of the party. Using the fringe Marxist Jews as cover to attack the Jewish mainstream – just as the communists did 100 years ago – the hard left are turning it into a race-based dispute. Posts from expelled Tony Greenstein and the toxic ‘Jewish Voice for Labour’ were written to bolster the argument. Suddenly it is all about the colour of the skin of those that took part.

It is as if the election never happened and we are back in Corbyn’s prime. Toxic antisemitic messages fill Labour’s Facebook groups and message streams. Corbyn’s Twitter army also goes on the attack:

If Keir Starmer is to save Labour he has to stamp this out completely, that is a given, but we must fight far beyond those basic lines. It is not enough just for moderation and anti-racist principles to regain the helm of the party, for they may lose it again. These extremists are at work inside every part of Labour’s powerbase, nibbling away at people’s opinions. Agitating, creating division and setting people against the Jews. Look at their posts. They are not even trying to hide it anymore.