Michael Gove is Minister for the Cabinet Office. His wife uploaded an image of a bookshelf onto social media. What followed this simple action borders on surreal.

The crimes of the bookshelf

After Sarah Vine uploaded the image, the bookshelf police went to town analysing what exactly was sitting on the shelf. It is perhaps also important to note that Vine had explicitly stated this was just some of their collection. In any event, none other than Corbynite loyalist Owen Jones decided to attack Gove for some of the books on the shelf – which included a book penned by notorious Holocaust denier David Irving: 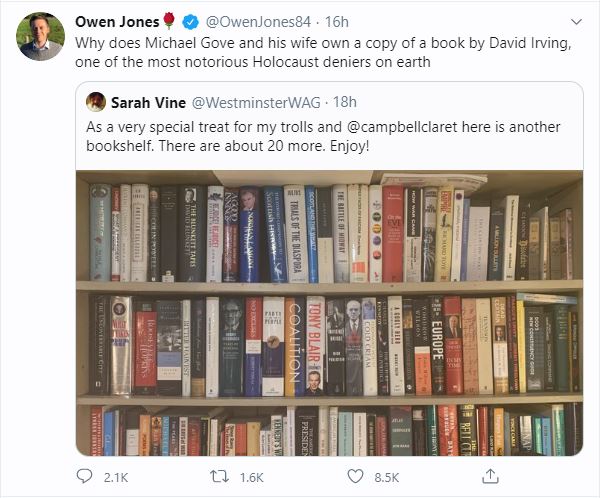 Others swiftly followed, such as the fringe Jewish fruitcakes Jewdas: 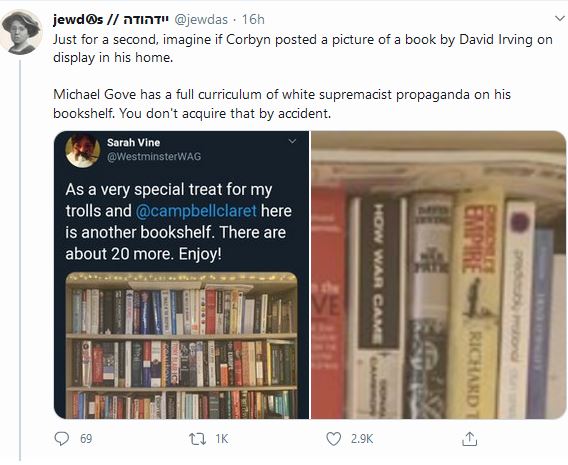 Within hours, David Irving, Owen Jones and Michael Gove were all trending on social media. When some started to stand up for the freedom to have on our bookshelf whatever books we choose, the social media dogs turned on them too. Even Karen Pollock, the CE of the Holocaust Education Trust became a target.

Some have pointed out the Gove has written an article attacking Irving and perhaps the book was purchased for the research. This type of argument plays into the fascist narrative. We do not need to justify what books we have on our bookshelf – nor give an account of them to anyone. The Independent went as far as publishing an article attacking Gove that even used the word ‘sinister’. We now live in a world where this type of behaviour is considered normal. Our bookshelf can be used to judge us. This is what the modern left has done to us.

To join in the party, this is part of my bookshelf: 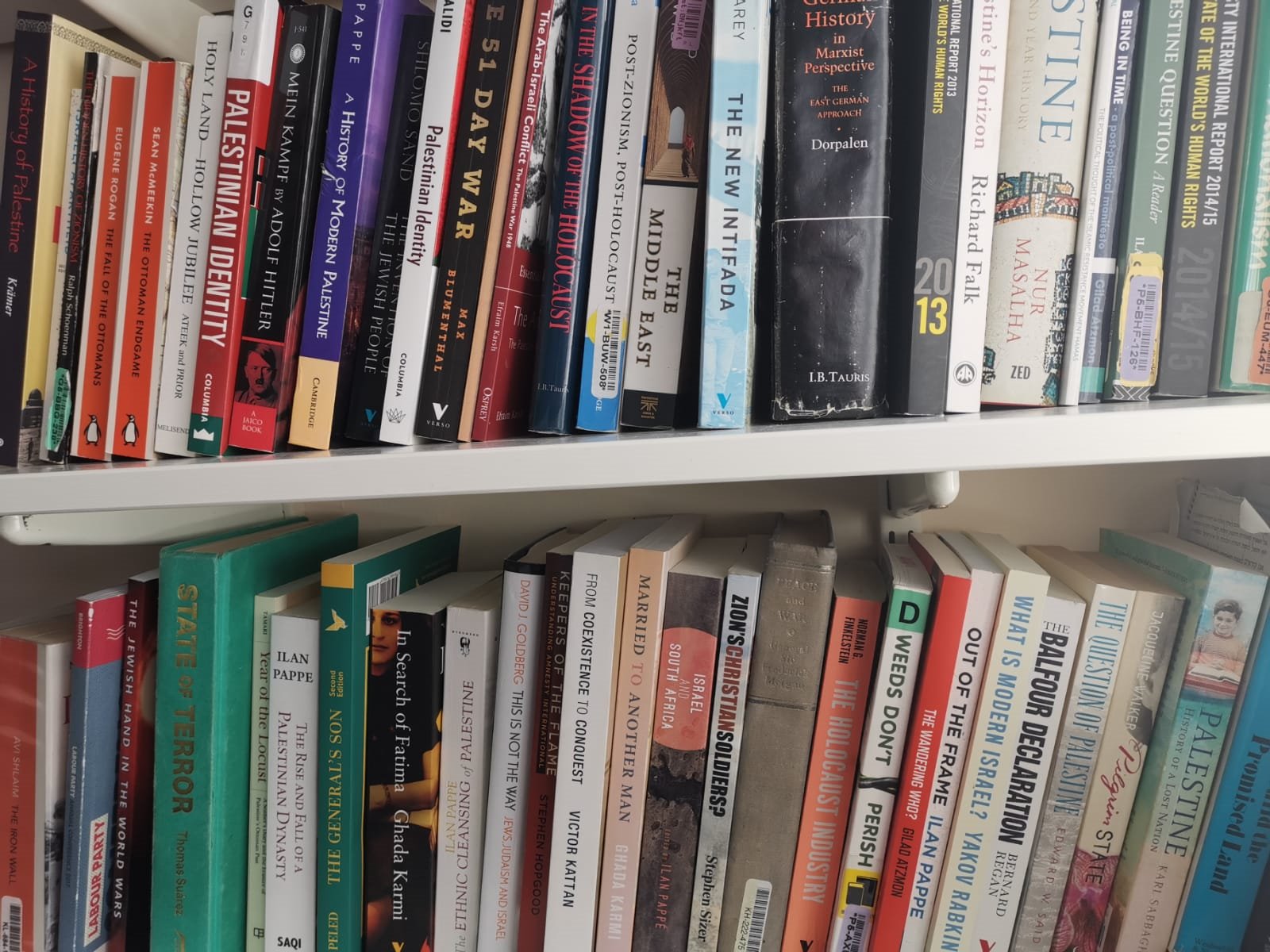 David Irving is not in this section, but Adolf Hitler is there. Others of note include Gilad Atzmon, Tom Suarez, Max Blumenthal, Illan Pappe, Karl Sabbagh, Jacqueline Walker, Ghada Karmi and Nur Masalha. There is a book about how the Jews started the world wars. The Protocols are in there somewhere too. The Bell Curve is not there, but Gilad Atzmon draws heavily on the Bell Curve in the book ‘Being in Time’ (yes, that  is on my bookshelf). So if am I also to be judged by the books on my bookshelf I am clearly a hard-core antisemite and pro-Palestinian activist.

The loss of left-wing media and academia

It wasn’t just the Independent. Some of those jumping onto the anti-Gove bandwagon are examples of everything that is wrong with the left today. Take Dr Jennifer Cassidy, Departmental Lecturer in Global Governance and Diplomacy at Oxford University. This is a top academic at a leading university. A place where voices should be heard and arguments countered with facts – which we can only do if we have researched properly. Here is a tweet of hers suggesting only certain types of books should be on our bookshelf: 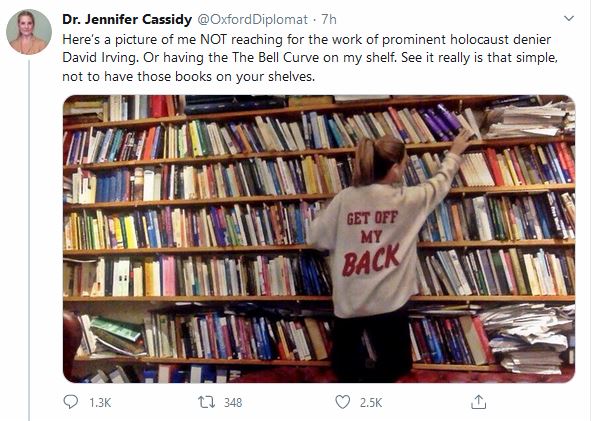 In today’s academic world, things operate very differently. Dr Jennifer Cassidy thinks propagandist anti-Israel activists such as Ben White are ‘experts‘. Which explains why she supports the boycott of Israel. These people are activists, not academics and this self-righteous and single-minded virus is destroying our universities. We can see the result and our freedoms and opinions are often denied platforms in university spaces. Now we know why. Cassidy’s tweets are horrendous – and full of factual errors – like this one: 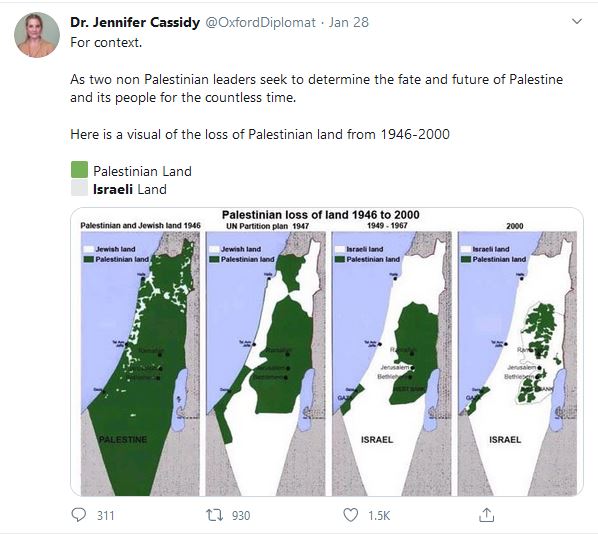 Look closely at Cassidy’s post. She clearly misrepresents the map. If she had analysed it at all, she would have seen that the first two maps discuss ‘Jewish land’ – not ‘Israeli land’. Israel did not exist in 1946. The first map in particular is deeply racist / antisemitic. Can you imagine an academic sharing a map of the UK pointing out areas where non-whites live and calling the rest of the UK ‘British land’? That is precisely what this map does – only with Jews and the lands of the Palestine Mandate. The green area in the first map is simply ‘Judenrein’ – whether it is privately owned by non-Jews, or state land owned by the British.

The hard left are so locked within their own bubble they are incapable of looking at themselves in the mirror. They really cannot see what they have become – modern day fascists. They tell us what is moral and right and they silence us when we disagree with them. If we stand up to them their voices often turn to threats. The only thing this has done is expose that those like Jones are Cassidy are narrow in their own reading – and have bookshelves that confirm their own bias – which perhaps explains some of their views.

It should also be recalled that Owen Jones defended Jeremy Corbyn for writing a forward in a deeply antisemitic book. Is Jones suggesting that the book was never on Corbyn’s bookshelf? But again, these type of justifications and arguments play into the hands of the fascists. Stephen Pollard wrote this in the Jewish Chronicle:

Michael Gove has probably done more for Holocaust education and the Jewish community in Britain than any senior politician other than Gordon Brown. It’s obvious to anyone why he would have read the work of a Holocaust denier.

Which, whilst it is true, is in its own way just more justification. I would have written this:

Michael Gove lives in the UK. As British citizens we are privileged to be free to hold on our bookshelf whatever books we choose and what is on them is nobody’s business but our own. Wars have been fought for those freedoms and we need to reject those that attempt to tell us what we can write, what we can read and what we can think. There is no argument needed beyond this.

20 thoughts on “In the UK, our bookshelf is nobody’s business but our own”