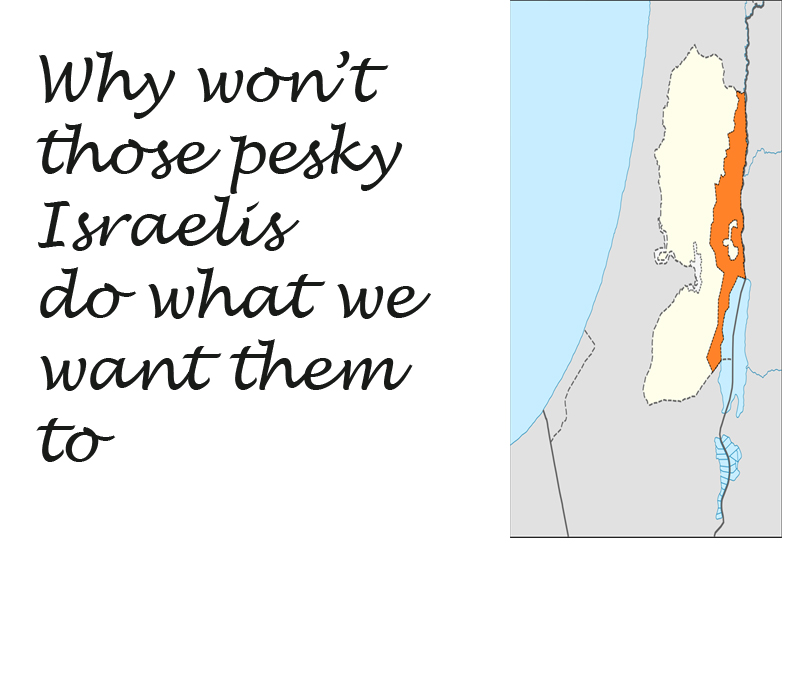 Some UK Jewish papers have already opened the ‘annexation front’, criticising Israel for unilateral action it may be about to take. I promised myself I would stay quiet on this until July – when I expected to be forced to stand up against an uproar from some of the small-but-vocal quarters of the diaspora community. It seems they are so eager to make a noise, they started early.

Most of those troubled by the annexation are also those deeply disappointed that Netanyahu successfully navigated every obstacle that he had to face. Fooled by the insane political analysis of those who actually believed their own hype, they somehow thought a coalition could be built to depose the right-wing block. For months they performed mathematical and ideological summersaults, building neverthere coalitions and putting numerous ideological enemies together in some farcical political alliance. Father Christmas had more chance of appearing in the halls of the Knesset.

According to certain elements in the Diaspora, those pesky Israelis just keep voting the wrong way. Oh, how they wish the Israelis were as clever or ‘woke’ as they are.

To some, Israel assuming sovereignty over the Jordan Valley is merely an assertion of existing rights over highly strategic land, originally intended to be part of the Jewish homeland. To those still stuck in the mud of Oslo this is a blasphemous way of thinking. For them the Jordan Valley is in the ‘West Bank’ and therefore part of the future Palestinian state. If Israel is to hold onto it, it can only do so as part of a negotiated settlement with the Palestinians. If there are no talks – Israel must do nothing. They refer to this inaction as the ‘status quo’ and consider it holy.

This holiness only counts when it works in their political favour. When the Palestinians lobby the ICC to bring Israelis to the Hague or push the UNHRC to have companies operating in the ‘settlements’ named and then boycotted, they do not shout in protest. Some even applaud. Only Israel’s position vis-a-vis the ‘status quo’ must be maintained at all costs.

The land up for annexation comes as no surprise. In one of his final speeches to the Knesset, Yitzchak Rabin made it quite clear the Jordan Valley would remain in Israel:

The original idea for annexation of this area had been put forward by Minister Yigal Alon to Levi Eshkol’s government as early as July 1967. All these people were on Israel’s political left. Control of the border with Jordan is of major strategic importance. Should Israel learn no lessons from its withdrawal from Southern Lebanon and Gaza, now both terrorist run enclaves. The failure of Oslo because of Arab violence taught Israel a hard lesson and has a cost – and that includes the necessity of Israel controlling the key border with Jordan.

The attack on Israel

The ‘wise and enlightened’ left-wing elements of Diaspora Jewry do not see it that way. Mick Davies wrote an article that Jewish News gave up their front page for.

The piece is little more than a baby throwing his toys out of his pram because the Israeli election didn’t go his way. The piece is utter bunkum. Either Mick Davis knows the way Israeli coalition politics have ALWAYS worked – or he really should not be commenting at all. I wonder if he was as concerned about what the ‘people voted for’ when Rabin formed his wafer-thin majority to drag Arafat the terrorist from Tunis to Ramallah? Probably not.

Now I have no time for Davis and don’t particularly care what he thinks or says, but on this occasion the Jewish News clearly climbed on his back to push the opening salvo in the diaspora annexation war. They are making their own opinion known.

The Jewish news did run a response from Likud MK Sharren Haskel. As an Israeli politician, Haskel was far more polite to Mick Davis than I would have been, but it is part of her duty to nurture these ties. Unlike Mick’s front-page item, Jewish News tucked this away on page 22.

the Board of Deputies

What is taking place at the moment in the British diaspora is almost civil war. The Board did make a mistake, it over-accommodated a disproportionate number of Israel-critical voices. Once on board, the hard-left do what they always do – they seek to cause trouble, divide and rule. If you seek examples of the effectiveness of hard-left propaganda strategies – just look at how quickly they consumed the Labour Party. As with Corbynites, these lefty Jewish elements talk in pretty keywords, but act like fascists, using our own democratic principles against us. One prominent Deputy even tried to threaten me with a lawsuit UNLESS I gave up a source for one of my BOD exclusives (lol, as if that would frighten me). These people seek ever more divisive ways to push their own agenda. The failed survey was one of their goals.

Part of this annexation battle is not therefore actually directed at Israel at all, but rather at the Board and as a recruitment strategy for political groups such as Yachad. This is about using the annexation to push the BOD into being Israel critical and painting Israel as ‘anti-peace’ and in desperate need of a makeover.

The Jewish News happily oblige in giving this more room than it deserves and another opinion piece appeared recently. I am neither going to link to it nor reference the author as anything other than ‘X’. I do so not to protect him/her, but to protect me. It is part of the strategy that the left play exceedingly well. They put forward an opinion by using a young and usually female figurehead. When the response to the offensive opinion occurs, they hold the original author up as the victim of extremist, ageist and perhaps misogynistic abuse. They even managed to turn the tables after some said Kaddish for Hamas terrorists. Those poor youngsters who said Kaddish for Hamas terrorists, ticked off by older and wiser heads. How very dare we.

In my opinion these people are irrelevant snowflakes who, if they seek to air their voice in print, should grow a spine.

Included in the recent JN article is also the vile accusation that Israel is going ahead with this because it can do so under the cover of the pandemic. Lies and more lies. This is the kind of demonising ‘Jews use a virus’ nonsense expected from Electronic Intifada.

Fact: There have been three elections in Israel recently. As early as September 2019, Netanyahu vowed to annex the land as soon as he was returned to office. The only reason this is potentially happening in July 2020 and has not already occurred is because the election results brought stalemate. This has nothing to do with any virus and SHAME on any Jewish outlet that suggests it does.

There is actually a letter circulating now, from mostly Jewish youth in university. A few hundred signatures calling on the BOD to criticise Israel. There is little more twisted than seeing a letter from 400 spoilt Jewish youngsters in university whinging about Israel – at a time when their counterparts in Israel are in uniform, with guns, facing down terrorists. Do diaspora hard-left Jews have a right to speak. Yes, of course they do – just as we have a right to ridicule their privileged naivety.

Some of those who signed the letter even voted for the Labour Party in December. Some said prayers for Hamas terrorists. Other names in the list should know better. The truth is that this letter is an indictment of the British Jewish community – not of Israel. What have WE done, to create this. The letter is a mixture of ignorance and lies. It is full of the ‘end of days’ nonsense that the immature political animals on the left always use.

The pretence that Israel somehow has a viable partner at the moment is simply delusional. Those who are spreading these delusions to our children and teaching them to turn their backs on Israel by twisting the truth are almost guaranteeing that our grandchildren will not be Jewish. They think they are being clever – history will pen them as driving our community off a cliff. It may not bother them. It bothers me.

The Israeli left shifted to the centre because Oslo FAILED. No amount of shouting from Hendon or Temple Fortune will change that.

The truth is this. As much as Israelis would probably like to have the full support of all Diaspora Jewry, they know they cannot both have their cake and eat it. They are unable to look after their own security, deal with their own problems, worry about their children in the army, suppress terrorism, face down Hamas, accept there is no PA partner for peace, defend themselves, exist in the Middle East AND at the same time, manage to satisfy the naive fantasies of some Jewish residents of Hampstead or Hendon who want to be able to virtue signal in front of their friends.

Yes, you can have your opinion. But unless you are prepared to send your children to the army to defend the Jewish state, let us not pretend that opinion matters too much. You want a voice that counts? Make aliyah. But hey – July approaches – don’t forget to all write your opinion pieces and tell everyone how Israel has let you down. You are all so desperate to show it off to your friends and tell them how innovative Jews in Israel are – how dare those pesky Israelis keep spoiling it for you by worrying about their own security.