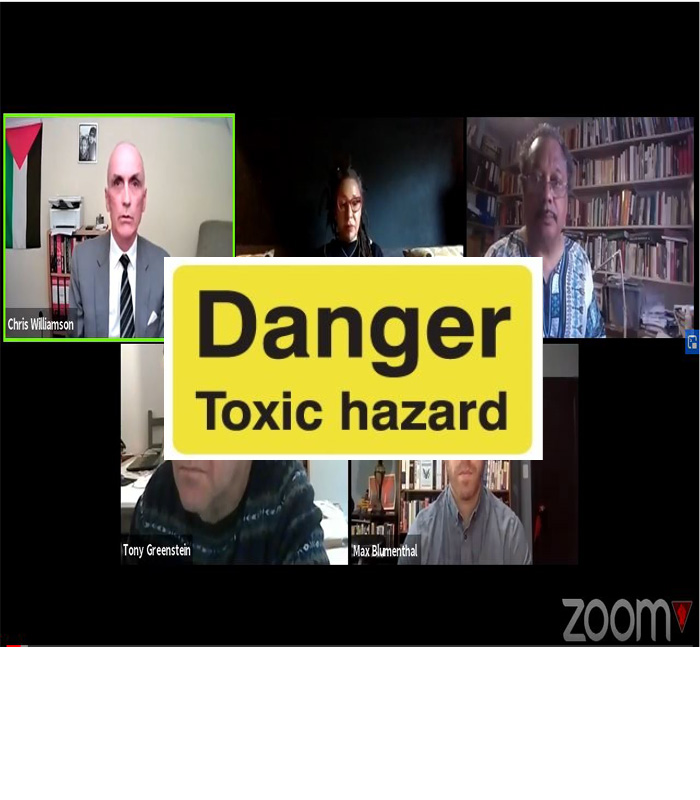 I have sat through many toxic events in my time, but even for me yesterday was something special. A gathering of no less than four of the Labour party’s ‘antisemitism’ stars, Chris Williamson, Jackie Walker, Tony Greenstein and Mark Wadsworth. As an additional bonus they had a special American panel member – the conspiracy theorist and anti-Zionist rock star, Max Blumenthal. It could have been even better. Ken Livingstone was due to speak but in the end was not well enough to participate. Maybe next time.

The event went on for almost two hours, with each of the participants giving a short speech before those watching were allowed to table questions.

It was hosted by ‘Resistance TV’, a YouTube channel with a whopping 800 subscribers. The event was titled ‘Defending Free Speech and Challenging Manufactured Consent’ and forms part of the ongoing Williamson campaign to start a new political movement. That’s right, all those that were forced out or expelled by the Labour Party want to create a movement where their toxic views will become part of the manifesto. Needless to say, Jews need not apply.

Williamson chairs the event and gives a talk about the need for free speech. It is to be the drumbeat of the event. Williamson then quickly hands the floor to Tony Greenstein.

Greenstein opens by stating that the antisemitism in Labour is just ‘manufactured, simulated, created and falsified, before going on to say that the ‘whole campaign was contrived from the start’. Within minutes the tone for the entire evening has been set. When they talk about free speech, they mean they want freedom to attack the Jews.

I have seen all these people speak more times than I can care to remember. Listening to each and every one is like wading through a sewer. Some represent a deeper sewer than others. For example, Jackie Walker’s adoption of a Jewish identity, which she then used to bash the Jewish community organisations with, was one of the most toxic themes of the Corbyn era.

The speeches are guarded, but one by one they go beyond simply calling the antisemitism crisis a manufactured smear – it is unsurprisingly all about the powers that control.

The ignorance on display is truly outstanding at times. At one point whilst trying to prove how Zionism is actually racism, Williamson relies on the 1975 UN vote for evidence. As if he says to the crowd ‘see- we knew the truth back then’. When I see Williamson talk, I often wonder how someone so galactically silly can ever have been a sitting MP. If the Soviets and Arab bloc had wanted to vote that the earth was flat in 1975 – flat the earth would have been.

The speeches are predictable. The key message is that the antisemitism does not exist. Instead, the unseen powers of the world are simply stifling support for ‘Palestine’. In Greenstein’s speech, which was mostly incoherent waffle, he goes on about the incredibly well funded and coordinated campaign, which he is certain does not originate in the UK.

These people actually believe that those like myself have extraordinary influence and power, all well-financed from Jerusalem. The monsters they have created in their heads are so powerful, that the only logical path for them is to build convoluted conspiracy theories for their positions to maintain any internal cohesion. The fact I am just some unfunded researcher, sitting with little more than a keyboard, access to the internet, an Oyster card and some recording equipment is not a possibility they are left able to accept. Their invisible monsters are simply too large to accept the truth.

How Venezuela and Syrian Assad supporting Max Blumenthal still makes sense to anyone is a question for the ages. Blumenthal operates like Ben White, in that he throws so many names and incidents into a never ending sentence, that you fail to realise there is no actual substance to the content. He intimidates the listener into believing that they are in the presence of someone with extraordinary knowledge.

At one point Blumenthal went on about how there is possibly a ‘military style operation’ out to discredit him. What he meant was that one Wikipedia editor has done something he didn’t like.

As is always the case, their conspiracy mindset comes across far more in the unscripted Q&A than it does in the short pieces they had prepared to say. Needless to say, this is all about the invisible ‘elites’ and Zionist power.

The questions were always going to play to the conspiracy crowd. Looking at the list of names making comments alongside the video was like a reunion of antisemites for me. Familiar names kept cropping up. People like Joseph O’Neil, who runs a deeply antisemitic group called ‘Interfaith for Palestine’ was an active viewer.

The interesting battle that I want to highlight took place in the comments.

The Free speech that isn’t

These people seek to create a new political movement and it is important not to dismiss them so easily. We drove them back, but this is not over. Their ideology is in firm control of many of our universities, unions and schools. To highlight the danger of allowing these people any sort of power, we only need to look at what happened in the comment section.

The event was primarily about free speech. Free speech? Any comment posted that criticised the narrative was instantly deleted. The moderator Sian Bloor didn’t leave anything that she didn’t like up for more than 30 seconds. This post for example, was quickly removed:

In a world in which free speech is paramount, why was it removed?

Dozens were removed. To show how toxic the situation in this little band of extremists has become, I will give one clear example. The following comment was made:

As anyone researching antisemitism knows, ‘ZOG’ is neo-Nazi terminology. It is the stuff of Stormfront. The expression is mainly found in the US and comes from white supremacist, white nationalist, far-right, websites. This comment was too much for someone watching and they told the moderator to remove it:

What happens next tells you everything you need to know about these people. The moderator Sian Bloor did take action:

The moderator deleted the complaint! Think about it, someone posts neo-Nazi terminology and the complaint is considered unwelcome. This at an event all about freedom of speech. As I said in the beginning, Jews are not wanted here. Incredibly, the moderator Sian Bloor was actually the National Education Union’s Trafford branch secretary until last year. The NEU! This is what has a firm grip of our children’s education.

It is wrong for us to feel complacent just because of the December election results. There are enough signs in today’s troubled world to suggest the battle is far from over. As Labour embarks on a self-cleansing operation (with the help of the orders that will come from the EHRC report), there will be extremist movements to the far-left that are large enough to create a political momentum of their own. Pay attention to them.

All these people are ideologues. And as a result of this they are so firmly convinced in their twisted global visions, that they cannot fathom why they do not receive massive popular support. For them, the obvious answer is that they believe they do – and so the creation of a massive conspiracy by those in control who are out to silence them becomes the logical result. Which means Antisemitism is a natural byproduct of these politics. Never forget this because these people thirst for a power they must never be allowed to achieve.