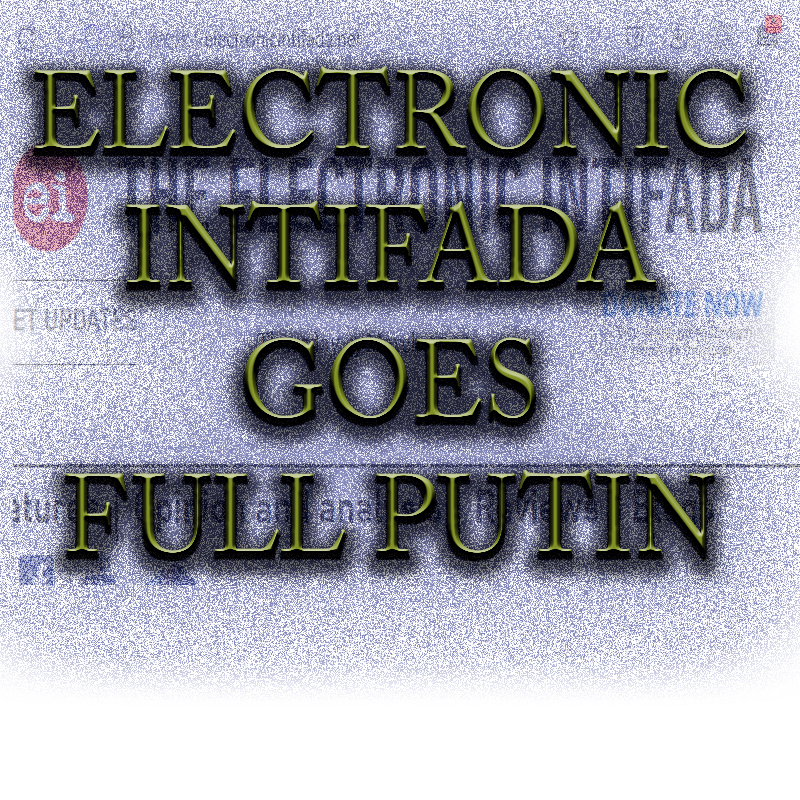 Like most people I have been watching with horror the unfolding events in Ukraine. Unlike many I am not surprised at all. My Zionism is primarily based upon an understanding that the world is a nasty place. Since the 1990s a growing (yet entirely baseless), sense of over confidence has embedded itself in the west. The cold war Soviet threat was replaced with the Islamist one – and whilst these far-off radical terror groups could make us bleed – there was no perceived existential threat to the problem.

The Russian invasion of Ukraine is a rude awakening. As the people of Ukraine are slowly crushed by the Russian pincer movements, we applaud them in our parliaments, we speak of how brave they are – and we run to send them aid packages to make their suffering a little less ‘suffery’. But that is all we will really do. We won’t fight Russia. Putin found a turf outside of the NATO umbrella and picked a fight knowing we will refrain from escalation. He is free to do what he wants.

The only people you can trust

There is no cavalry coming to help Ukraine. Nobody can save Ukraine but the Ukrainians or an implosion from the Russian side. And in this truth lies the basis for my politics and my Zionism. At the end of the day – the only people you can trust with the safety and security of the Jewish people – is the Jewish state. Every other nation out there – including Israels closest allies today, will only come to Israel’s aid if it suits them to do so.  If, like Ukraine, the Jews were to find themselves dependant on aid from nations who were politically restrained for whatever reason – real help would never arrive.

And make no mistake. The only reason Ukraine is in our news everyday is because it is in Europe, the refugees on our screens are white *and* we feel comfortable hating the aggressor. The primary issue here is not the barbarity of the invasion, nor the supression of democracy or human rights – but rather that this is taking place on our own geo-political doorstep.

Our attention and our sympathy is always case specific. We are often playing the role of the cat while the politicians and media hold the laser pointer. Take the Biafrans. ‘Who’, I hear you ask – which is exactly the point. The Biafrans today are suffering under an increasingly violent Islamist boot in Nigeria. There are innocent civilians being slaughtered on a daily basis and these people are never mentioned in our news. But the Biafrans are well used to being ignored. In one truly dark episode of British history, we sat by as millions of them died. ‘Sat by’ is perhaps an understatement – we supported the regime that carried out the killing.

All over the world today there are ‘Biafrans’. Forgotten people suffering under one despotic boot or another. The safety and survival of the Jewish people is dependant on a strong, independent Jewish state and this simple fact should never be forgotten or downplayed.

The Russian invasion of Ukraine has opened another long forgotten division – which sits at the very foundations of the ‘Palestinian struggle’. Ever since the fall of the Berlin Wall, the pro-Palestinian movement has embedded itself within mainstream leftist western thought. Time was that this was impossible. The Soviet Union allied with the Arab bloc and then used downtrodden refugees, leftovers from a 1948 civil conflict – to do what they did best – create division and perpetuate unrest. The uneccessary creation of the Palestinian identity was a deliberate act that led to unmeasurable suffering – on every side. This is the only reason a conflict that should have ended in 1949, is still ongoing today.

And for as long as the Soviets sat behind their wall – the status quo remained intact, but that all changed in 1989. In a post Soviet world, parts of western society began to believe that their bubble was ‘the world’ and what really mattered was gender identity, decolonisation, white priviledge and critical race theory. Let’s be utterly frank – outside of our western bubble – which contains only about 10% of the world population – most people think we have gone insane. Do the Biafrans – along with the Kurds, Uighurs and countless others that have long been sold out – need to make sure that they sign every plea for assistance with the correct pronouns? The world hasn’t changed – some people just fool themselves into believing that it has.

The post Soviet world was still a dangerous one. A world with Russia, China, Pakistan, Iran, the DEC, Nigeria, Myanmar and so on is hardly a vision of utopia. But with the ‘big bad’ seemingly done away with, a growing number of people in the west lowered their guard and for decades Russian state propaganda has spread endless lies into our ‘bubble’. Assisted by Islamist forces such as the Brotherhood and PFLP, what was once the ‘unthinkable’, became a new truth embedded inside the mainsteam left.

Western politicians / journalists / academics / activists all shared the lies of these propaganda outlets. You don’t have to go far to find evidence of politicians sharing RT Today or numerous other Russian propaganda outfits. The lies they told were endless – and these lies became the new truth.

‘Israel is an Apartheid state’ is a lie so obvious – yet everyone from the BBC to CNN has given this propaganda airtime. That is where some of the conversation is now and it shows just how successful these outlets have been over the last few decades. In the last few days Twitter has taken to placing warnings on Russian State news outlets. Why now? What exactly is it that separates the lies of Russian propaganda today, from the lies of yesterday? Or last year? Or the year before?

But with Russia on one side and the west on the other – the original divisions have become visible once more. I hope everyone is paying attention to the ‘Electronic Intifada’ mob now pushing out pro-Putin, anti-western propaganda. How many of our politicians, councillors and academics have felt comfortable spreading anti-Israel lies by sharing Electronic Intifada articles for all these years?

Think about it. Propagandists such as Asa Winstanley and Ali Abunimah (Electronic Intifada) have been key in leading the fight against Israel. Their articles have been shared countless times, handed around the halls of power in the west and used to push arguments from boycotts to explicit calls for the destruction of the State of Israel.

They are now engaged in a distinctly pro-Putin, anti-western propaganda campaign.

Most of their posts in the last few weeks have pushed anti-Ukranian propaganda. Even some of their supporters have noticed. One contacted Abunimah to ask if he had ‘gone insane’: 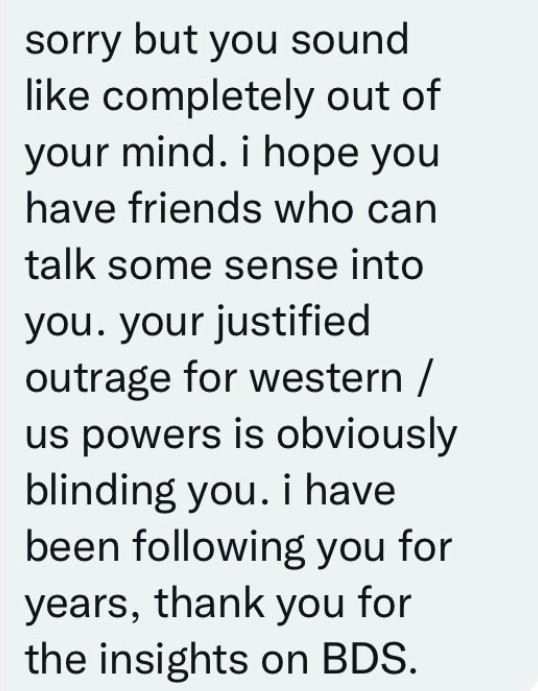 That private message is evidence of the rabbit hole that many left wing human rights activists have fallen into. They were duped by an endless stream of Russian or Islamist propaganda, spread over decades, through an increasingly loud drumbeat. They actually thought they were engaged in a fight for human rights. Insane? It is no more insane that believing that the only democracy in the Middle East is an apartheid state.

The alliance is visible everywhere you look. Remember Elleanne Green – the founder of the notoriously antisemitic group Palestine Live?

How about Middle East Eye? Middle East Eye (MEE) is a London-based online news outlet covering events in the Middle East and North Africa. It is part of the main news feed of *every* anti-Israel activist in the west.

MEE is meant to focus on MENA – and yet they are so invested in this that they have created a special section on this conflcit in the main menu of their website! How about Mick Napier, head of the antisemitic Scottish Palestine Solidarity Campaign:

Shahd Abusalama, the Sheffield Hallam activist who was recently investigated for terrorist-supporting social media comments, is another who has difficulty understanding straightforward ethical issues:

I could write a 2000 page report, highlighting how so many of the key faces behind the anti-Israel campaign are either supporting Putin, or have gone into hiding so the face beneath their mask is not revealed.

Just a few days ago Bob Seely MP, named and shamed several ‘amoral’ British lawyers who he claimed had allowed Vladimir Putin’s “henchmen” to intimidate and silence a free press.  They are not all strangers to us. In the list was Hugh Tomlinson, the QC hired by hard left groups to discredit the IHRA definition of antisemitism.

Openly siding with Putin is not the only strategy. Many have taken to disgracefully call Ukraine – a democratic state with a Jewish leader – a ‘Nazi state’. Others like Mohammed El Kurd try to draw parallels between Ukrainians fighting against the Russian invasion and Hamas suicide bombers climbing onto buses and blowing up children. These people have no shame – and yet for years they have endlessly been held up in the west as leaders of a ‘moral’ argument.

It has all become transparent now the mask has been removed. Anti-Israel activism is propped up by a Russian disinformation campaign. Just as it always was.

And all those who shared Electronic Intifada, MEE, or spread the word of any of the pro-Putin media outlets as a means of demonsing the Jewish state – how do they explain it now? It is not just the fringe faces. Here is Wes Streeting MP sharing an MEE propaganda video during the conflict with Hamas last spring: 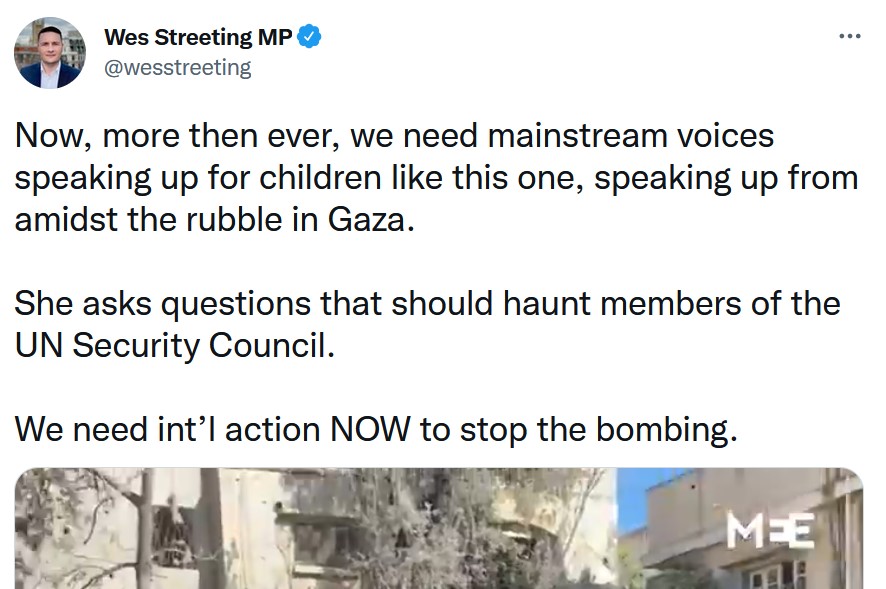 Do they still believe these outlets are reliable sources of information worthy of sharing with their followers or constituents? What about those that waved the Palestinian flag at ‘Stop the War’ demonstrations? They should all hang their heads in shame!

We always knew the truth. Now it is there for all to see. But the bottom line is this:

We must be thankful as Jews that Israel is strong and is capable of defending against those that seek to do it harm. Outside of our progressive bubble it is still the same old dangerous world it has always been. It is easy to remember this when Russian tanks are surrounding Kyiv. We must make sure that we all remember this even when the waters will once again appear deceptively calm.

Support the fight against antisemitism