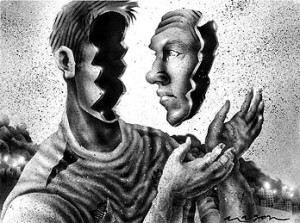 This specific piece is a blog amongst friends and it should be read as such; an in-house conversation such as those that supporters of Israel engage in at the Friday night dinner table (or for my Christian friends, a political discussion during the Sunday roast); jackets off. This is not about confronting the enemy without, but speaking of weaknesses within.

I tend to internalise before I write in an attempt to control the anger I sometimes feel, so it has taken a few days for me to digest the events of the last week; the despicable attack at the Jerusalem Gay Pride event and the horrific attack against innocent Palestinian families that resulted in the tragic death of an 18 month old baby.

Despite both being unacceptable, there is a difference between the two actions; one of them would likely occur regardless of the security situation with the Palestinians. It could occur in a nation at peace. For this reason and this reason alone, it is the actions against the Palestinian houses that I wish to address.

In the attack against the Palestinians in the village of Duma, two homes were attacked and as you would expect in these circumstances, condemnation has been swift and across the political spectrum. It is necessary for us to visibly condemn such an act and every group and movement regardless of their political persuasion has rightly, visibly and vocally spoken out against the act; identifying it as potentially being a clear act of terrorism.

But, this is not enough.

I have grown to respect and admire the discomfort I feel with the current status quo. Regardless of your political persuasion, regardless of how you view the land beyond the 1967 borders, people that are not Israeli reside there. In my mind, it is important that a permanent and fair solution be sought even at the cost of losing areas of land many Jews consider of biblical importance. It is why I have always supported the idea of two states. Personally, however I rearrange the pieces on the chess board, I see no other viable option.

This is not to say that I believe such a solution is currently available, merely to point out that the want for a solution automatically dictates that currently an ‘abnormal situation’ exists. During wartime, many abnormal situations can exist, rationing in the UK is an example; but however much they impact on the life of the state or the people within, however long the situation may last, however impossible a solution may seem, these abnormal situations should never become internalised as indefinitely acceptable. A permanent and fair solution must always be at the top of the wish list.

This conflict, between accepting a situation currently may not have an answer and maintaining that an answer must still be sought, creates internal discomfort with the status quo and all its consequences. I would argue this discomfort is a vital and necessary part of being Israeli. It is a discomfort we should nurture and cherish. This discomfort is a reminder that we are ethically healthy. It is a badge to be proud of.

Unfortunately amongst Israelis and Israeli supporters, there is a minority that have internalised the current situation as being normal. Those that have accepted they possess an absolute right to control, not just a piece of land, but also the people that live on that land. Normalising this type of power, this type of control is unhealthy and it is dangerous.

The terrorist act in Duma was horrific, but so too is the act of sitting passively, believing that the people in Duma in some way ‘deserved it’. Baruch Goldstein’s actions in 1994 were those of a terrorist, but the people who still hang his picture in their halls also need our absolute rejection. Denying or belittling their existence is part of the problem. We need to realise that there are dangers inherent in this abnormal situation and we must remain absolutely vigilant to ensure we hold those dangers at bay.

This opposition isn’t to those that believe in Greater Israel (although I politically disagree with them) but to those within that group that discount the humanity in the non-Jewish people who are also living there. If we are proud of the way our non-aggressive, non-proselytizing religion has evolved, it is important to remember religion is always in flux. If there were an area in the world where Judaism could be warped into something distasteful, it is in the current status-quo. Some Jewish people felt it okay to firebomb a house, another to stab gays; last year, several though it apt to kidnap and burn a Palestinian. These are just the actions widely publicised because they have a fatal ending, there are many others. The people committing these acts may be a tiny minority, but they are our tiny minority and they have to be aware their actions speak for none of us.

It isn’t enough to say the State will deal with it. When suicide bombers ripped through the Egged and Dan buses of Israel, we didn’t just expect lip service from the PA. We didn’t just want them to use their police force to fight Hamas. We rightfully expected every Palestinian to distance themselves from the act and reject entirely the philosophy that supports it. In turn we need to reject the philosophy as much as the act.  It isn’t just about what the arsonists did, it is more about why they believed they were justified.

Israeli actions I support have always been about the existential threat and about security. We must do what we have to do, and if it results in the heart-breaking situation we have now, then so be it; but only as much as is necessary and for as long as is necessary.

We have to make sure that we never normalise the situation, we must never be okay with the idea that Israeli soldiers are someone elses unwanted masters. Everything that happens must remain something we are reluctant to do; something we are forced to do. The control of non-citizens must never become a choice and it is vital that an alternative message, a message of ‘normality’ is not allowed to prosper within segments of Israeli society.

Hopefully, one day, the pieces on the board may just be arranged in a way that allows for everyone to move forward. It is optimistic to suggest the day is approaching. Whatever happens and however long it takes, always remember to raise a glass to your discomfort; rejoice in it.

2 thoughts on “Duma – A time for introspection”