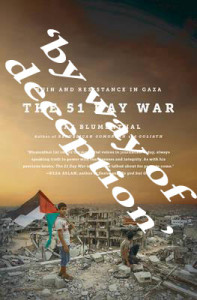 In the firm belief that listening to opposing arguments is vital, I took myself to the latest Max Blumenthal book launch for his written account of last year’s conflict in Gaza and Israel titled ‘the 51 Day War’.

I did feel hostility in the room; deep hostility. In truth it began earlier, when having seen me associate with the pro-Israeli demonstration outside, an agitated attendee protested my presence as I came to enter the building. “Is he allowed on the steps?” she asked; “Yes” I replied. This mind-set of the pro BDS camp, in which my feet are too dirty for their steps, is something that people unfamiliar with the movement find hard to comprehend. Yet it is the essence of BDS.  A swift separation of Jews into good and bad, where the act of spitting on the blue and white flag with the Star of David gains you the chance of becoming a tolerated presence. Even through the act of talking to pro-Israelis, I had become ‘too Jewish’ to be allowed in the room.

The event itself passed relatively smoothly. Blumenthal got to say exactly what he wanted to and a handful of Israeli activists inside played their part. The room certainly was not full; barely 50 people including the organisers and the Israeli activists had made their way to hear Blumenthal speak. The only disruptions were questions that did not fit with the message that Blumenthal wanted to bring across; but he is skilled in both avoidance and manipulation; the questions were answered with the words he had prepared long in advance.

Blumenthal apparently went to Gaza and had ‘unfettered access’ to everything that was unfolding around him. It always surprises me how ‘reporters’ do this, attempting to sell an obvious lie as a way of improving their own credentials. Nobody has unfettered access in Gaza because Hamas rules the streets. You can go where they’ll allow you to go, and if the story is one they want told, they’ll even help you to get there. That is how Western reporters got to see the Gaza conflict and this is why it was reported in the fashion it was. If you don’t want to do it the Hamas way, there are perhaps a few other options, but don’t expect to see very much, be allowed to stay, or have a story to sell. The Palestinians have been playing this game now for almost 3 decades and have mastered this craft, Blumenthal next to the Hamas PR machine is a gullible novice. But let’s not try to steal his thunder; let’s hypothetically allow Blumenthal his ‘unfettered access’ in Gaza.

He did not speak freely as he had done in a similar event in the US, but rather was guided on specific stories, by the ‘host’ of the evening, Sarah Colborne, current chair of the Chair of the Palestinian Solidarity Campaign (PSC). As a side note, the irony of the PSC’s Sarah Colborne claiming at one point that heckling or trying to stop someone talking is a coward’s way of dealing with an argument was not lost on me.

Colborne led Blumenthal and Blumenthal followed, with harrowing tales of death and destruction. And the brutal truth is that Gaza in 2014 would have been full of these tales. It is undeniably a horrific situation; and I doubt anyone would remain unmoved by the experience. And here is the trick of the magician; Blumenthal concentrates on the death, the family, the child, the wheelchair; and grabs your attention through the human suffering that is undeniably a part of Gazan existence; yet the sleight of hand is the twisting of the context, the shifting of the details and the removal of the cause. Blumenthal distorts the frame whilst the audience is admiring the artwork.

And distortion is basically all I heard. The war was a ‘necessity’ for Israel because the need to sell weapons drives Israel’s requirement to show how successfully these weapons kill people. It’s all about money. This was reinforced in the claim that the entire occupation has to continue in perpetuity because the Palestinians are Israel’s 2nd biggest export market (BDS is not going so well over in Palestine it seems). The absurdity of these notions may never be questioned by an audience who have already decided that Israel is an embodiment of Satan, but I cannot believe it would work on anyone who maintains rational thought. In reality, if Palestine were to become a peaceful vibrant state with greater levels of personal income, it would purchase even more from Israel, but the workings of basic economics in a free market arena seem to be a step too far for Blumenthal to grasp. His is a gutter conspiracy.

But getting Israel to go to war still requires the death of Israelis, and Blumenthal needs to describe how 3 young Israelis, Naftali Frenkel , Gilad Shaer and Eyal Yifrah conspired to get themselves killed just so that Israel could go to war to sell more weapons. Blumenthal didn’t address this in detail last night, but did so in on page 9 of the new book. It is in the description of what is called ‘a failed kidnapping’ that it becomes possible to analyse the way Blumenthal works best.

Blumenthal goes to great lengths to show he knows what was in everyone’s mind, the kidnappers, Hamas leadership, Israeli leadership and of course the Israeli security services. Each stakeholder’s motive is described in a way best suited for the story Blumenthal wants to tell. How he knows all this is never mentioned. But the glaring errors in the story itself are never far away. Here are just two:

• If this was a lone cell, operating without Hamas knowledge or assistance, how were they ever going to be able to smuggle 3 Israelis deep enough to be hidden and for long enough to make a prisoner exchange?
• If this was a planned kidnapping that went wrong only after one boy phoned the police, why did the kidnappers spontaneously celebrate after shooting the boys? The whole event took seconds; hands up if you have ever heard anyone, anywhere celebrate the sudden failure of a mission.

And this is what Blumenthal does; he places a story that would never hold up to criticism into a context of his own imagining which then supports the idea of the demonized state of Israel. His supporters lap it up; most people would thankfully just turn their backs. Palestinians actions are always explained by ignoring or excusing the violence, Israeli actions are always demonic. The Hamas rockets become ‘fireworks’, the terrorists become heroes. What the UK would do if 1000 rockets were suddenly fired on Portsmouth and Southampton is not discussed. A question from the audience regarding the absence of a drive for Palestinian statehood prior to 1967 was met with an unconnected deflection about the 1947 partition. Balfour was openly derided. History, wherever it is uncomfortable is just ignored. The entire evening was a whitewash.

Blumenthal, in common with all anti-Israeli authors, uses the names of plans and strategies such as ‘Plan Dalet’, ‘Mowing the Lawn’ ‘the Dahiya doctrine’ and the ‘Hannibal Directive’ to suggest they have a deep understanding of devious Israeli strategy and intent; ‘proving’ through this implication that Israel is led by people who consider themselves the master race, fulfilling the master plan against the poor downtrodden Palestinians. Nothing does this as well as a sinister sounding military strategy and a quote out of context from an Israeli politician. It is how 750,000 Palestinians apparently were all forced out by the mighty Zionist army in 1948 and why over 2000 Gazans died last summer.

One story of this type he recounts simply left me nauseous. Blumenthal describes how Israeli soldiers approached a family and asked who speaks Hebrew and when the Hebrew speaking Palestinian identified himself he was promptly shot in the chest. This story is also told in the book and was also part of Blumenthal’s testimony in the farcical Russell Tribunal on Palestine. It is an absolute nonsense that defies logic. Anyone with any real knowledge of Israel would automatically dismiss it as fantasy, but having told it to his audience as a story he heard ‘repeated throughout Gaza’, Blumenthal then begins to create for them the strategic reasons Israeli soldiers would embark on such a policy. It is a horrendous strategy of deception.

And it was at this point I realised that shock is a major part of Blumenthal’s selling process. He deliberately seems to go out of his way to anger the part of the audience he knows is both present and critical of him. The BDS boys are already sold; they don’t need feed such as this, Blumenthal desires to be disliked. He wants to agitate because it gets him noticed. Once the Q&A highlighted the presence of pro-Israelis, Blumenthal visibly became more outrageous; it was as if the two sides feed off each other. His message of hate towards Israel sells his books and the more we shout his name in anger from the rooftops, the more books he will sell. So he turns the level of venom up another notch.

Israelis don’t shoot Hebrew speakers. It’s a fantasy world created by a conspiracy nut who suggested that ‘my government’ ‘his government’ and ‘Israel’ are all engaged in some deep dark scheme that keeps the innocent Palestinians locked away in their refugee camps because it pleases some cabal of capitalists. All we need is for all those capitalists to be Jewish and we have a new edition of Protocols.

Blumenthal works on the premise that you cannot attack his position without appearing to attack victims, cynically using dead Gazan children as human shields.  As Blumenthal mentions the amount of explosives the Israelis used as being more than ‘Hiroshima’, describes military strategies where Hebrew speakers are targeted for killing and uses comparisons with Darfur to infer genocide, the clear message is one of total force by a brutal army against an innocent population. Massive force being used without care against one of the highest populated areas on earth. And yet more innocent people died in Syria last week than in Gaza in a 50 day conflict ( Didn’t you see the massive protests in London?) Given Israel’s supremacy, the numbers simply do not tell the same tale. Israel clearly is not behaving the way that is being attributed to it.

And it was over. Having seen a slight altercation outside the building caused by two seemingly harmless women, I approached them at the station on the way home. They did not know who I was, and my possession of a bag with Blumenthal’s book suggested I was ‘a friend’. I am not going to recount the exchange here, but as usual a simple conversation about the conflict highlights a thorough lack of knowledge or information and a deep hostility to ‘Zionists’.  They have formed solid opinions without even a grasp of the basics. When eventually they realised I was a Jew who wouldn’t spit on the Israeli flag, they walked away.

I haven’t read the whole book yet, but  having seen Blumenthal talk, the over-riding sensation I am left with is one of sadness. The only challenging questions that came out in the Q&A were from pro-Israelis, the remainder of the audience had nothing to say and gushed over every word. It was an empty room with a few empty people looking for their bias to be fed. And fed they were.

9 thoughts on “A distorted evening with Max Blumenthal”