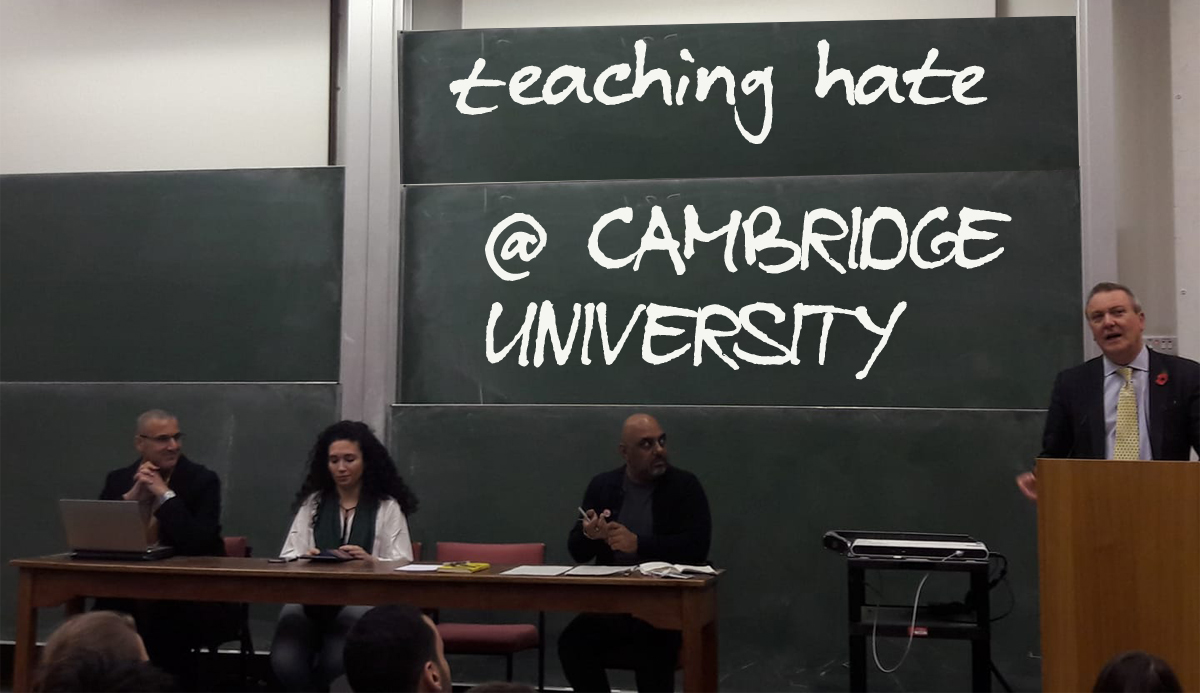 The University of Cambridge – teaching ignorance and hate 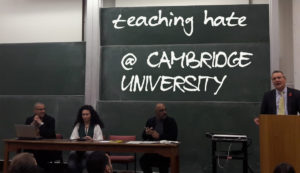 Universities and ‘free speech’ arguments are back in the news again. This time at Cambridge, with the Evening Standard running a story about the University of Cambridge being ‘slammed by senior academics over a ‘crackdown on free speech’ at a student Palestine event.

Social media is also full of a petition, aimed at criticising Cambridge for forcing a change in the chair for the event.

The entire argument is bogus. On both sides.

I should know – I was there.

The University of Cambridge motto reads – ‘from this place, we gain enlightenment and precious knowledge’. What I witnessed on Wednesday was the opposite. The only thing the students gained was hate and ignorance.

There were three speakers:

I was clearly in the presence of hard-core anti-Israel royalty.

Aside from the historical distortions, and constant plugging of the ‘boycott Israel’ campaign, all of the sub-text messages were socially, racially and ethnically divisive.

The speeches are all about identity politics. ‘White privilege’, ‘Black lives matter’ and a recurring theme that ‘Blacks and Palestinians’ are the same . ‘Intersectionality’ is mentioned maybe 30 times. This becomes the entire theme of the evening.

I am not part of their exclusive group. These people are insistent we are all different. Apparently we are different because of our colour.

The entire case is a simple one. Jews are white European colonial settlers, and as the privileged group are part of the crimes of the ‘mother state’. Everyone who is not white is part of the same anti-colonial struggle. Whites can applaud them from the sidelines, (feeling guilty for their crimes of course), but can never truly be one of those ‘throwing off the shackles of colonial rule’.

I never get the ‘white guilt’ part. Put aside the fact that it is like me blaming my neighbour for evicting the Jews from England in 1290. Just who is guilty for what? The white person in the third row, whose ancestors may have sat rotting in a debtors jail, or in a workhouse, needs to feel guilty about what exactly?

It is distasteful divisive politics.

To address the central arguments over a ‘neutral’ chair: In reality the entire discussion is bogus. A ‘neutral’ chair is required when vigorous debate is allowed, as a way of maintaining balance and order. These political propaganda exercises are choreographed, with three ‘agreeing’ speakers. So my first question to the University of Cambridge is this:

What is the point of having three speakers, if there is no, and I mean no, dissent at all between any of them?

Once three speakers all agree with each other, then what is the role of the chair? As hostility can now only come from the audience, the chair is now committed to maintaining order, which means limiting any possible dissent, to a very quick question, that can and will be dismissed by all three speakers. Someone took 40 seconds to ask a question and it was pointed out by the chair it was too lengthy.

If the person raising the question tries to add context, or indeed point out that the question has not been answered properly, then the chair will silence him. In other words, a neutral chair in such a circumstance is pointless, his defined role is to enable and protect the propaganda.

This was the type of discussion being delivered at the University of Cambridge. It isn’t free speech at all, far from it. It is hate speech being protected inside a place of learning that is regarded as one of the best in the world. How is anyone allowed to present such a choreographed political anti-Jewish diatribe without giving room for an organised response? I don’t care that they talk, I object to lies effectively going unchallenged in a place of learning.

Racial propaganda behind the protest

The truth is that had the speaker been a white British anti-Israel activist from Cambridge, exactly the same arguments would have been raised. Even when the ‘neutral chair’ was explicitly questioned on the subject of neutrality, and had the opportunity to add clarity to the reasons Ruba was sidelined, he opted for further obfuscation.

Ruba Salih was not considered neutral because she is an activist, on the side of the panelists, and her race, religion, and skin colour have absolutely nothing to do with any of it.

This is an example of how the petition is being distributed online: 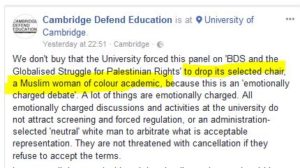 Which makes it entirely fraudulent. Nobody was dropped because of their colour or religion, and both online, and at the event itself, this is the way the petition was being sold. Cambridge have every right simply to throw the damn thing away.

Why at no point during the proceedings, even as a petition was handed around, were any of the students told that the ‘racial’ and ‘religious’ reasons publicly given for Saleh’s exclusion were entirely bogus?

Promoting racial hatred at the University of Cambridge

Perhaps, if the topic were over the laws of physics, or economics, the effects of permitting a one sided regressive propaganda campaign to be unleashed on students, would simply be to make them more stupid. However, this isn’t about the laws of physics. These people are spreading lies that deliberately target a racial /religious group. The entire campaign is designed, through distortion and lies, to turn one tiny Jewish democratic state into a focus of hate for all the ‘oppressed’ people of the world. It isn’t promoting science, it isn’t furthering knowledge, it is about teaching students to hate a specific people.

My third question to the University of Cambridge is this:

Dozens of students were fed vicious lies, that were left unchallenged by any of the participating panel. As this flaw is created in the design of the event, what steps do you take to address the racial hatred that is propagated during the event?

(I would gladly return to Cambridge, and highlight the lies and distortions that were delivered, I am certain I could conduct the exercise in 45 minutes.)

Finally, let me address the University response as reported by the Evening Standard newspaper:

‘In this instance, following calls from the organisers for extra safety measures, a neutral chair was provided to ensure that all sides were represented in what is an important and often emotionally charged debate.’

So a fourth question:

The entire free speech argument is bogus. The only speech being denied is a right of response. So much so, that towards the end, I felt physically unwell. The attacks were relentless. Bouattia for example, claimed that in 2009 or  2011, the Israelis ‘carpet bombed’ the people of Gaza. Israel was even referred to as a ‘despotic regime’.

What is occurring is insidious. The argument of free speech is being turned on its head, in a perverse manipulation of the truth. Why won’t these lying cowards put their arguments up for challenge? Why is that cowardice supported by a university?

This isn’t SOAS, in some ways it is worse. Inside the London Universities, there is less discipline. Which results ironically in greater challenges to speakers, as those asking questions are neither as disciplined, nor as polite. As the smug, Chair at Cambridge continually insisted, the only permissible challenge would be short and respectable. How do you politely challenge a lying anti-Jewish speaker in less than 30 seconds?

51 thoughts on “The University of Cambridge – teaching ignorance and hate”