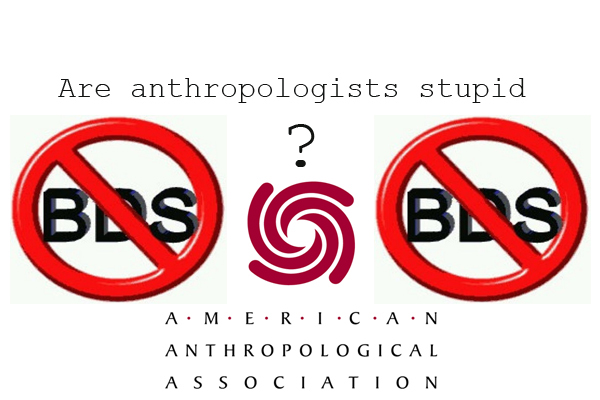 Are Anthropologists that stupid? 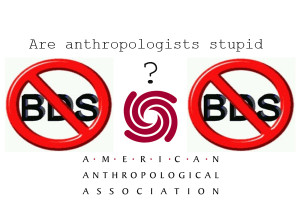 There is a vote taking place at the American Anthropological Association meeting in Denver tomorrow over the boycott of Israeli academic institutions. I am far more in tune with the BDS movements actions within the UK but having analysed the dedicated boycott website and seen their attempt to deceive the doubters through a Q&A page, it is clear that the method and flawed logic crosses the Atlantic without too much difficulty.

I never understand why anyone would vote for someone, anywhere, in any election, without knowing precisely where they stand and what they will do with your vote. BDS is deliberately vague and evasive, and yet naively people give them power, many out of genuine, well intentioned humanitarian concern, without ever knowing an answer to a simple question:

What is the BDS end-game?

If this vote was to materially concern those participating, it is unlikely votes would be cast without fundamental questions being asked. Here people play with other people’s lives, hiding behind empty rhetoric and soft sounding slogans. From the evidence that the stronger BDS gets, the further away the peace talks move, these votes cost lives.

There is little point arguing about the conflict itself, when clearly whoever is considering voting in favour has already decided either Israel is responsible for the current situation, or simply feels frustration at the impasse and is jumping on the BDS wagon because it is the only game in town. The BDS history of the conflict is so one-sided and so extreme that it is unlikely to make people educated on the conflict change sides. You would either follow that line of propaganda already or BDS are filling an empty vessel with it (I simply mean people who do not have a grounded knowledge of the history of the conflict).

Lives are being lost and well intentioned people want to see someone held responsible, want to feel as if they can do something to help. The battle ground therefore is highlighting just how BDS are the enemy of peace rather than a means to find or promote it. Joining BDS in any way, is to take sides; to actually declare Israel is wrong and that Hamas have a point.

When I say Hamas, I mean Hamas. The Palestinian president is opposed to BDS, it weakens his hand, hurts Palestinians, strengthens and solidifies the aims of Hamas. Just as they have been doing since 1920, Arab extremists outside are telling the Arabs inside not to strike a deal because they are coming to ‘rescue them’. In 1947 they told them not to accept partition, in 1949 they told them not to accept solutions on the refugees and in 2015 they are telling them not to negotiate peace. Don’t talk, don’t negotiate, don’t concede anything, BDS is coming. Isn’t there an underlying question here: If Israel thinks BDS isn’t the way forward and the Palestinian President thinks BDS isn’t the way forward, then just who is BDS representing?

So we begin by looking at how the Anthropologists for the Boycott of Israeli Academic Institutions answer their doubters:

The statement “Yes I oppose Israel’s actions but I don’t want to boycott individual Israeli scholars” is discarded as being unfounded.

How exactly is it unfounded? BDS success lies within its deception. If others by your side are taking the lead of boycotting the academics, not letting them talk, opposing having them involved at all, does it matter than you don’t? There are 100’s of examples of Israeli academics personally being excluded on the grounds by activist BDS fascists on campus. The idea is to exclude entirely any ‘Zionist’ from the conversation, to create an environment in which the very idea of a Jewish national home is considered extreme. Recently BDS excluded an American citizen,  Matisyahu, on these very grounds. Voters do not get to decide what BDS does with the strength and each individual action strengthens the whole. If the Anthropologists were to vote for boycott, this message is carried across, BDS gains strength and the effective individual and very personal boycott of scholars takes place. More Americans (not just Israelis) will face boycott merely because of their opinions. It is not a choice, it is an inevitable consequence.

Secondly there is a real irony to suggest that someone does not want to impact personally on an academic whilst at the same time, voting for a movement that specifically aims to destroy the very nation he lives in. Through its call for the implementation of a 66-year-old GA resolution, BDS calls for millions of Palestinian refugees to move into Israel (NOT into Palestine). Even in a two state solution, BDS wants two Palestinian states. Over the last 2 decades, the movements towards peace were all based on a delicate solution to resolution 194, finding a workable method of dealing with it. BDS wants to set the clock back 30 years. Just who is holding the weapon these anthropologists are loading?

The statement “Yes I oppose Israel’s actions, but this boycott is unbalanced since both sides have done wrong.” Is discarded out of hand as being unfair.

Firstly, by default referring to the ‘”lack of “balance” in Israel/Palestine suggests that the answer to any problem, regardless of who is at fault, is to punish the stronger side.  But it is the glaring error in the entire process. You are just one section of the army being developed. What of the other sections? You are being told the boycott is against academic institutions, but yet within the university campus, the *SAME PEOPLE* who are saying this are whipping up opposition to any academic that arrives on your shores. The *SAME PEOPLE* who are saying this, are whipping up separate campaigns persuading institutions to divest, to persuade shoppers not to buy. These *SAME PEOPLE* are members of FB groups, like FB pages and engage in various activities that are all about a ‘one state solution’. Very, very few BDS activists (I have yet to meet one) actually support the two state solution that many of those voting probably do. The clear truth is each and every one of those behind the BDS movement seek a single state from the river to the sea. Just as Hamas does. Every single one of them (I dare you to search to find one that doesn’t), and they have their hand out asking for you to give them even more power. Why on earth would you want to strengthen them and How can anybody justify doing so? Given the current impasse in negotiations (more on that shortly) BDS is a perfect example of the politician’s syllogism.

The statement “Yes I oppose Israel’s actions, but boycotts violate academic freedom” is discarded with the usual innappropriate examples.

Firstly, by saying that in one time, in one place, a particular boycott may or may not have been necessary, does not provide a reason to accept it valid today. The logic in this argument goes as follows. I ethically oppose the death penalty, but I have accepted it in a certain extreme circumstances, so when this group asks me to support the death penalty for this alleged criminal, I should do so even though this is a lynch mob with no judicial process.

Secondly, BDS make continual historical comparisons, referencing Nazis or South Africa. But Israel is not South Africa and everyone within it votes freely. There is a fundamental flaw in the BDS reasoning on this. In South Africa, there was no conflict and only a single narrative lay behind a denial of fundamental freedoms. Creating laws based on the colour of the skin was an absolute wrong, but white South Africans didn’t dispute the narrative, they justified it through prejudice. Here we have conflict and unlike Palestinians, nothing the black man in South Africa could do would change his position. South Africa was also not surrounded by enemies, waving a religious flag and calling for its destruction in the name of their god.

The statement “but why aren’t you boycotting the United States or other countries that do bad things?” is discarded by simply not answering the question.

This statement is simply not addressed.  It does not answer the glaringly obvious question of why Israel?  In attempting to deflect it also obscures the truth. The academic boycott did not begin with the Palestinians in 2005, but rather moving from the antisemitic Durban conference in 2001 to UK academia in 2002.  It is somewhat disingenuous of BDS to suggest they are ‘answering a call’ from Palestinians, when the PA President opposes it and it was the external supporters of boycott who went to Palestinian civil groups in 2004 and suggested putting out a global call to help make their case stronger. Thus the call ‘from Palestine’ came after the boycott.

I always tell people who think BDS is a ‘peace movement’  to look at the external comments of those bringing the motion. Not those who stand by their side in confusion, but those waving the banners, making the proposition, pushing the argument. Each and every one is *not in favour of a two state solution* and each and every one *does not want a future with Israel on the map, regardless of its borders*. Look down the list, google the names, see what they think when they *are not trying to put a moderate face on their case*.

Why is it, that the stronger BDS gets, the further away from the negotiating table the Palestinians move? BDS will not work because it will galvanize Israel internally, but it does contribute to the violence, it does push peace further away and it does strengthen extremism. The more extreme BDS is, the more distant the Palestinian partner and the harder Israel’s line becomes. BDS is a movement of war at the very time when movements of peace are needed. It has to be rejected. Efforts have to be made to push the two sides back to the negotiating table; that is the way forward, and, as is the intent of many of those behind it, BDS pushes everyone in the opposite direction.

So are anthropologists that stupid? On the day following yet another murderous terrorist attack in Tel Aviv, I guess we will find out.

2 thoughts on “Are Anthropologists that stupid?”