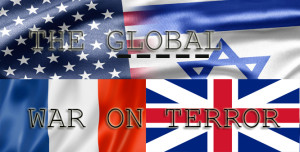 For those that haven’t read my writing before, I never shoot from the hip. The bigger the issue, the greater the anger, the longer I require to internalise events before I am able to place my thoughts onto paper. So it is little surprise that it has taken several days to digest the events that took place in Paris last Friday night.

Like most people who spent a long time in Israel, I am used to the emotional shock of the terror attack. Even as I write that sentence, the enormity of the impact that this has on my world vision comes home to me. What a horrible thing it is to be able to write that sentence, to know that one accepts barbarity in the behaviour of human beings as a ‘norm’ that we have emotionally learnt to live with; never to accept, but to live with.

It wasn’t always so, but Islamic terror comes at you again and again, outdoing itself, finding new ways to shock, more horrific targets to strike, until eventually you accept there is no limit to what they are prepared to do. Walking into a hotel on Passover eve to murder those who have come to partake of a traditional ceremony, detonating their explosives by a shopping mall on Purim to murder children in fancy dress, or double attacks where the second bomber takes out those that have come to aid the victims of the first.

Watching the towers fall, trains burn in London and Madrid, carnage in nightclubs, and horrific attacks from Bali to Copenhagen, Jerusalem to New York, London to Bangkok and Paris to Beirut, Islamic terrorists strike wherever and whenever they can. At a certain point you realise there is no point placing limits on their actions; if these terrorists are logistically able, then they will do it, whenever, wherever, regardless of where you personally may want to draw the line.

In Europe, the events are catastrophic, but with months and even years between attacks, there is presently time for a person to enjoy many days of humanity between them. It allows Europeans to stay grounded, and so, when an attack occurs, they get to experience the full horror of what we have just witnessed in Paris. How awful a position to be in, that I actually envy those that can still feel the shock the way I used to feel it.

These enemies, they are the same. They go by different names, they wave different flags, they hide behind different causes and they use different excuses, but never for one moment, despite self-stated differences, be fooled by their declarations; they are all exactly the same. Brothers in arms, even as they fight amongst themselves. They are the People’s Front of Judea and the Judean People’s Front of Monty Python. Daesh, Hezbollah, Islamic Jihad, Al-Qaeda, Hamas, Al-Nusra, Boko Haram, Ansar al-Sharia, each alone, or all together, presenting a Global Islamic threat against pluralism, democracy, freedom and choice. There is their way, or our way, and there is no room in the middle for negotiation.

And they try to turn us against ourselves, using excuses along the way to divide us. 2002 Afghanistan, 2003 Iraq? Forget it, Islamic extremists were murdering Jews in Jerusalem, Hindus in India and Christians in Egypt long before foreign troops were involved in attempting to contain the threat in Afghanistan. These are just excuses. And Israel? Israel is the greatest excuse of them all.

Europe in the 1930’s tried to contain the growing Nazi threat through appeasement. In 1938 Hitler suggested just giving him part of the Sudetenland to pacify him, so pacify him the Europeans did. Soon he wanted all of the Sudetenland, then all of Czechoslovakia and soon all of Europe. Israel is an Islamic Sudetenland. Europe, as in 1938, is being told that all it has to do is give the extremists what they want and they will be pacified. And from Sweden to Spain and Italy to Holland, governments waver, governments falter, wondering how much to pressure, how much to appease. Do we never learn from history? Israel is no different to the UK, no different to France, it is just geographically a lot closer to those that want to destroy our freedoms. In this war, Israel is our ally on the front line.

It is a tragedy that Europe is at times unable to identify the similarities. They recognise how ISIS manipulate social media, how they use video footage for propaganda and distort the reality of the conflict. And yet these people fall for the same PR tricks when it comes from Hamas or Islamic Jihad or Hezbollah. It is fear of the extremists that leaves Europe wanting to believe, despite the terrorist’s open talk about global Jihad. When they make their attacks against Israel, it is excused, when Israel responds, Israelis are criticized. For some Europeans, if it could be true that Israel were somehow different, if the extremists can somehow be pacified by sacrificing it, the world would look a safer place.

Two weeks ago voices in Europe criticised Israel for a shoot to kill policy, just as Europe criticises as weak those that suggest they themselves should not shoot to kill today. Every strike against terrorism Israel makes is placed under a microscope, yet France today can strike ‘without mercy’. The same enemies, the same war, with allies being forced to fight by different rules, and Europe ready to placate the enemy by handing them one of its own. Listen to the weakness amongst some of the leaders, ‘just pacify the extremists, just carve up Israel’. As if one tiny piece of land a few miles across will satiate movements intent on religious global domination. We have seen all this before.

In the West we even make excuses for what the Islamic radicals say. They tell us what is coming, they warn us what they are bringing, and we ignore it, pushing it away as extremist talk. Here too I have learnt to listen; when Hamas say they will attack, they attack, when they say their goal is to destroy Israel, that is their goal; from Daesh to Al-Qaeda from Al-Nusra to Hezbollah, the same rules apply; it is foolish to cast their threats aside just so that inside our heads we can feel safer for a while.

I truly hope that the day never comes when Europe or America react the way I do when terror arrives. I pray that it remains a rare and limited occurrence. When an attack happens, yes it saddens me, yes it angers me and yes my heart goes out to all of those affected, but shock? No, there is no room left for that feeling anymore. I register no surprise. So I hope we never arrive at that point in Europe as they have in Israel. Israel has been there for years, the Israel that is fighting the same enemy, the Israel that is on the front line. This is why it happens to Israelis more than here in Europe; it isn’t what they do, it is who their neighbours are. Hamas are on their border, so too is Hezbollah and Islamic Jihad and Da’esh. If Israelis lay down their arms, they will be gone. If we lay down ours, then our way of life will be gone too.

And yet across the West we have allowed for this division to enter our shores. Inside our schools, our universities on our high streets. People wave the banners of terrorist Hamas and Hezbollah on our high streets protesting against a single democratic nations fight against Islamic extremism. These people are given airtime on our media and discussion time in our parliament. The difference exists only in the imagination, and if you view these groups social media pages, you realise behind their cause, behind their excuse, is rabid anti-western fanaticism, global conspiracy theories and an ability to ‘understand’ the terrorist activity. It is Al Qaeda waving a different flag and if you argue the point, read the Hamas covenant and tell me how it is a ‘lesser evil’. They themselves tell you loudly and clearly exactly what they are. This ‘global fight against terrorism’ is permitted everywhere across the globe except in a single state, the Jewish state. Just a few days ago yet another student body in a UK university voted to support the Hamas strategic goal, eliminate Israel; this in the very week that Paris suffered at the hands of Islamic terrorists.

These enemies that we fight, they are on the same side. It is crucial to remember that so are we.