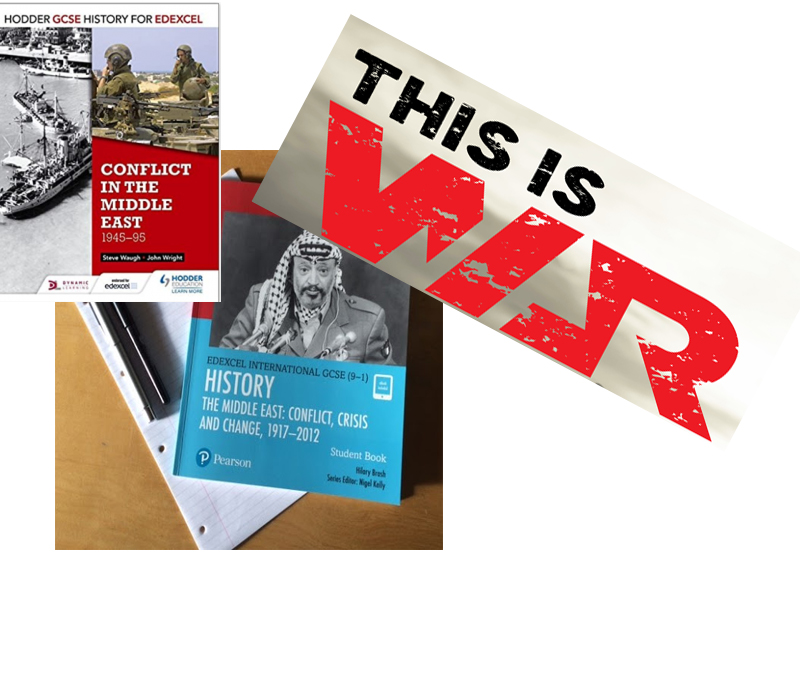 Fighting the academic demonisation of Israel in schools

How do you deal with historical distortion in academic  textbooks and propaganda in schools and universities? I would argue that if you want to really fight this fight, then you have to begin by understanding just how widespread the problem really is.

(On Wednesday I spoke as part of a panel on anti-Zionist, antisemitic propaganda in schools. The event was organised and chaired by UK Lawyers for Israel. Also on the panel were Noru Tsalic, Marcus Sheff and Nomi Benari. You can now view a recording of the event online.)

A battle for academic minds

The issue of historical distortion in academic textbooks and propaganda in schools and universities is as important – if not more important – than any of the other battles taking place for accuracy and truth. The children sitting in school will have their minds shaped by the information they are given. And if we take all the classrooms in the UK – including the universities – then sitting in those rooms is almost every single politician who will be lawmaking in the coming generations, alongside every future councillor, union leader, lawyer and teacher.

If lies are told to them unchecked, then we lose the battle for minds even before it is started.

How big a problem is it

In the last few months, two seperate UK textbooks (1 , 2) were checked and were removed from the shelves because of historical innacuracies and anti-Israel bias.

If we seek to put all the blame on the academic author or the publisher we are missing the point. These two books were written by different authors, did not rely on the same source material and went through the editorial checks of two seperate publishing houses.

We are dealing with an ideology, a narrative, a world vision – and much of the modern academic landscape has been swallowed whole.

Whilst I have access to some of what is taking place on campus – much of what is occuring in schools is beyond me. Not only are Jews a tiny minority group in the UK – but we are also highly concentrated in certain areas. This means that outside of our bubble are 1000s of schools which have no Jewish presence at all. Our eyes and ears simply do not reach very far.

What we see is only the tip of the iceberg and the problem extends far beyond textbooks.

I carry with me some personal experiences:

I was doing the Administrative & Constitutional Law module for the LLM. The academic course materials are clear. Yet the lecturer was an anti-Israel activist. She CHOOSES what cases we focus on to learn the material needed. So she chose one regarding police action at a Gaza protest. We had to read through the entire case. This way all the students – who hadn’t signed on to anything other than a law degree – became immersed in Gaza and the issues of the conflict. This moves to seminar discussions – where the room turns into an anti-Israel hate fest. This was watching propaganda work in real-time.

The next example is a school:

I was in Norwich to see a Jackie Walker event. One of the speakers was a teacher. His contribution was to read stories written by his year 8 students (12-13 years old). The school task was to IMAGINE they were children in Gaza. To do this he also needed to explain a little about it and send them on their way. I have no idea if he also provided web links for them to research further. These children have had their minds poisoned.

I was researching online when I stumbled across a post of a proud mother – an anti-Israel activist boasting about a petition her child had signed at school. It was an Amnesty International petition calling for a boycott of Israel. The material at the school presented to the children was highly toxic. 500 children signed the petition.

That’s just three examples from me. One person with a radar. These are issues related to a distrubution of anti-Zionist / antisemitic ideology outside of the textbook. Teachers taking it upon themselves to introduce their own bias and ideology onto young children.

Noru Tsalic told me of another example – one not related to Israel. A few years ago his girlfriend’s children were given an English text to analyse. The children were just 10 or 12.  The text “happened” to be something about US troops in Iraq and Iraqi suffering.

At this point we need to accept that the anti-Israel vision is just a symptom of a wider problem. The people pushing the Iraqi narrative are the same ones attacking Israel. They have a global mindset. This explains why a similar distorted narrative can emerge from two different texbooks – it is all coming from the same ideological pool.

Over the last few decades anti-western, anti-British anti-Imperialist, anti-capitalist anti-Zionist ideologies have taken a firm ideological hold of western academic thought. They don’t just restrict their narrative to historical textbooks. As activists they will take every opportunity to spread their propaganda into EVERY subject that they can. From sociology to law – teachers in each course will find a way of introducing their pet topic onto the students.

If you refuse to address the elephant in the room, that this is linked to a Marxist – political Islamist alliance – you will remain unable to deal with it. Our schools will rush to teach criticism of Israel, but will not touch the brutal oppression of minority groups taking place in Pakistan. The US will be the focus of criticism, long before Russia. Israel bad – Iran misunderstood and forgivable. The PLO were freedom fighters – the Irgun terrorists.

We cannot fight this with our hands tied behind our backs. There are universities dependant on funding from oil rich regimes – what are those oil rich regimes getting out of it all? If you cannot mention political Islamist ideology for fear of being tarred and smeared, then they have already won.

Nor should we fight alone. Because this is an alliance that isn’t all about Israel, there are others affected by what is taking place. If the academic books on Israel are skewed, then the books on Sth Asia are as well. Even books about our own British history are being rewritten.

We don’t stop what we are doing – we coordinate better and build larger strategies to expand our reach. We need to find allies and build bridges between us. With these alliances comes stronger political power. More eyes and ears that can hear unwanted noise from further away.

Nor should we restrict ourselves to fighting on their choice of battlefield. This isn’t just about the books. We need to take the fight to them – back onto their turf – into the unions, schools and universities and limit their ability to push their ideologies onto unsuspecting children. The law exists – we need to make sure it is tightened and enforced.

Those who try to remain re-active and politically correct whilst engaging this discussion will forever be condemned to play a reactionary wack-a-mole game, holding up an occassional ‘win’ as the whole ship goes down. Not the type of game I will ever be caught playing myself.

25 thoughts on “Fighting the academic demonisation of Israel in schools”