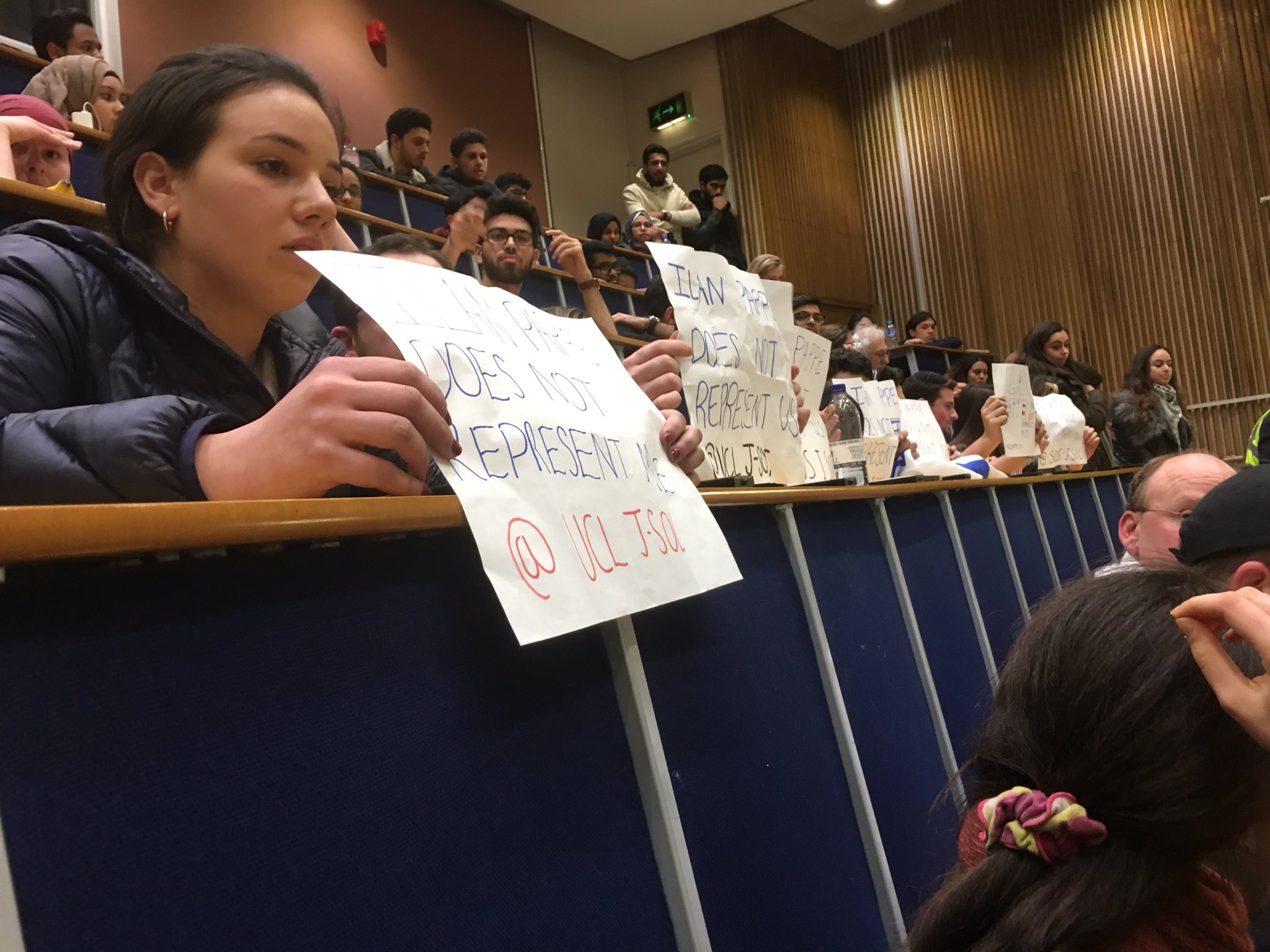 Last night at UCL there was an event hosted by the UCLU Friends of Palestine Society (UCLUFOP). The speaker was Ilan Pappe and the title for the talk was ‘am I an antisemite’? The event was set up as part of a general trend in anti-Israel activism: To find extremist Jews who are willing to deflect accusations of antisemitism and provide an umbrella for all manner of Jew hatred. The event went on to highlight so much of what is wrong with anti-Israel activism on campus.

The event began with a banner on display and ended with an exchange outside the campus hall. In between were several items that I wish to mention: 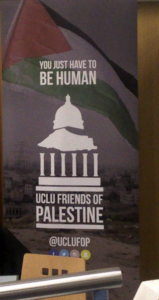 The ‘welcoming’ UCLUFOP banner contains the term “you just have to be human”. It was placed at the front of the hall, next to where the speaker and Chair sat.

I have problems with the phrase expressed in the banner. What does it mean? That to oppose the political position put forward by this group, makes a person non-human? That to side with Israel does the same? Apparently, my self-identification as a Zionist, a Jew who supports Jewish self-determination and a right to statehood renders me a ‘non-human’ on the UCL campus. So, what am I – a rat or an insect? How are Jewish Zionist students on campus allowed to be so publicly de-humanised?  Is nobody paying attention?

Much has been written on Ilan Pappe and his aversion to historicity. He has been caught on camera visibly accepting historical distortion to protect his ideology. What is beyond debate is to say he is seen by Jewish Zionists as a highly offensive figure. To invite him as an expert fit to ‘define’ antisemitism at an event at the UCL campus is disgraceful. I cannot imagine UCL permitting a speaker viewed by Muslims as highly offensive being allowed on campus to define anti-Muslim hatred.

That Ilan Pappe was chosen to lead this event was a provocative act. That this event dealt with providing a cover for Jew hatred was unforgivable. This, on a campus where anti-Israel activity has been seen to be violent, anti-democratic and in opposition to the basic elements of free speech.

Ilan Pappe did not answer the question. Rather he avoided it. Instead of having an interesting, valuable and rigorous academic debate about the lines between antisemitism and anti-Israel protest, Pappe set up blanket cover without exception. In Pappe’s eyes, there is no antisemitism on the left, a visibly ridiculous notion. But Pappe is not there just to protect anti-Israel activists from accusations of antisemitism, regardless of what classic tropes they may use, Pappe is there to distort history and push his own ideology.  Instead of attacking the deep subject matter behind the question, Pappe spoke of Israel as a ‘settler colonial’ state, used cheap sound-bites, and twisted historical fact. In the end, Pappe’s speech becomes one endless and deeply twisted insult to anyone who seeks fairness, truth and dialogue. On top of all this, Pappe’s own utopian dream, ‘Narnia in the Middle Eastern desert’, underpinned his entire delivery.

Israel is not ISIS

Pappe is also there to provoke. This from Pappe last night:

“”some of the chapters of this suffering, especially what the Israelis did to the Palestinians in 1948 are as bad as what Daesch (ISIS) is doing today.”

I think it wise at this point to introduce a description from the 1929 massacre of Jews at Hebron. One example, one single event, in 100 years of Arab violence against Jews:

‘Rabbi Hanoch Hasson was murdered, along with his family. A pharmacist, Ben-Zion Gershon, who’d served both Arabs and Jews, “had his eyes gouged out before he was stabbed to death,” Auerbach relates. His wife’s hands were cut off before she and their daughter were killed. Mr. Goldshmidt was tortured, his head held over a kerosene flame, before he, his wife, and one of their daughters were killed. Twenty-three corpses were discovered in the Anglo Palestine Bank, where women were raped on a floor covered with thick pools of congealing blood. Rabbis Meir Kastel and Tzvi Dabkin and five of their students were tortured and castrated before being murdered. The killings went on for two hours, and the final death toll reached 67.’

I think this can be left virtually without comment. Given the actions of ISIS in the Middle East and the general environment of Israel’s neighborhood, a comparison with ISIS becomes a deliberate provocation if not outright antisemitism.

Antisemitism is about Jews

This is a standard tactic of antisemites and it is typical of Pappe that he stooped so low. Not only does he claim that antisemitism does not occur on the left, but Pappe is smearing the term out of existence. As a historian, Pappe is well aware the term antisemitism refers exclusively to Jews. It is the term coined to describe Jew hatred.  Pappe is also no doubt aware, that part of modern antisemitism is to claim that Arabs are the true Semites, and Jews are fake Semites from Khazar. All of this is done merely to legitimise hatred of Jews. What on earth was Pappe doing, inside a campus, bringing up an entirely false premise deliberately to blur the lines? Antisemitism has nothing to do with anyone but Jews.

We don’t control the media

At a certain point during the Q&A, it is reported that an audience member accused the Zionists of ‘controlling the media’  and having the media ‘all on our side’. Needless to say this is just another antisemitic trope repeated at a UCLUFOP event. It wasn’t the only one last night. References to ‘Israeli tactics’ when a British Jewish student responded to Pappe also crossed the line.

I rarely speak at events. As an investigator, a journalist, I try to keep myself separate from what unfolds in the room. I am considered hostile by anti-Israel activists, and almost all those in London recognise me. Last night, at the UCLUFOP event, I could not remain silent as I watched a clearly discriminatory exercise unfold in the lecture hall.

It had been made clear that nobody would be allowed to film the event, even though it was being live streamed. Although perhaps within their rights, this is part of a ‘risk control’ strategy that allows the hosts to edit out or stop filming, anything they do not want recorded. 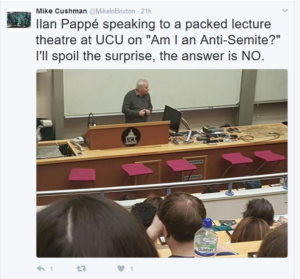 However, following the public message, several members of the UCLUFOP society were placed strategically around the theatre to keep an eye on specific members of the audience. Only looking at Zionists of course. As the evening progressed it became clear that the two leading members of the society, were wandering around focusing on those in the ‘enemy camp’, they believed to be taking pictures. On one occasion, footage was deleted, and the people concerned were threatened with expulsion.

The problem was however, that others members of the audience were freely taking photos. When the first question was asked, no less that 8 mobile phones (from the front rows) were raised pointing towards the person asking the question. Mike Cushman (an anti-Zionist) also tweeted a photo from the event.  At no point was any attention paid to these people, their cameras or what they were doing. This was a clearly discriminatory (and therefore illegal) exercise.

It was when this matter surfaced again, that I stood up and pointed out the obvious. That the UCLUFOP society members were on a witch hunt specifically targeting Zionist Jews. I mentioned that the process was discriminatory and should be stopped.

It must be acknowledged that after the event, Yahya Abu Seido from the Friends of Palestine Society pulled me to one side for a discussion. He was visibly disturbed by my accusation. But this highlights only that this atmosphere is created unintentionally. Discrimination such as this does not evolve as an intent of our actions, but rather as a consequence. The university is responsible for allowing this hatred, this inevitable side-effect to grow unchecked.

Towards the end of the Q&A session, Jewish students in the audience raised signs to protest the choice of Pappe as a speaker to handle this sensitive matter. With Pappe clearly not capable 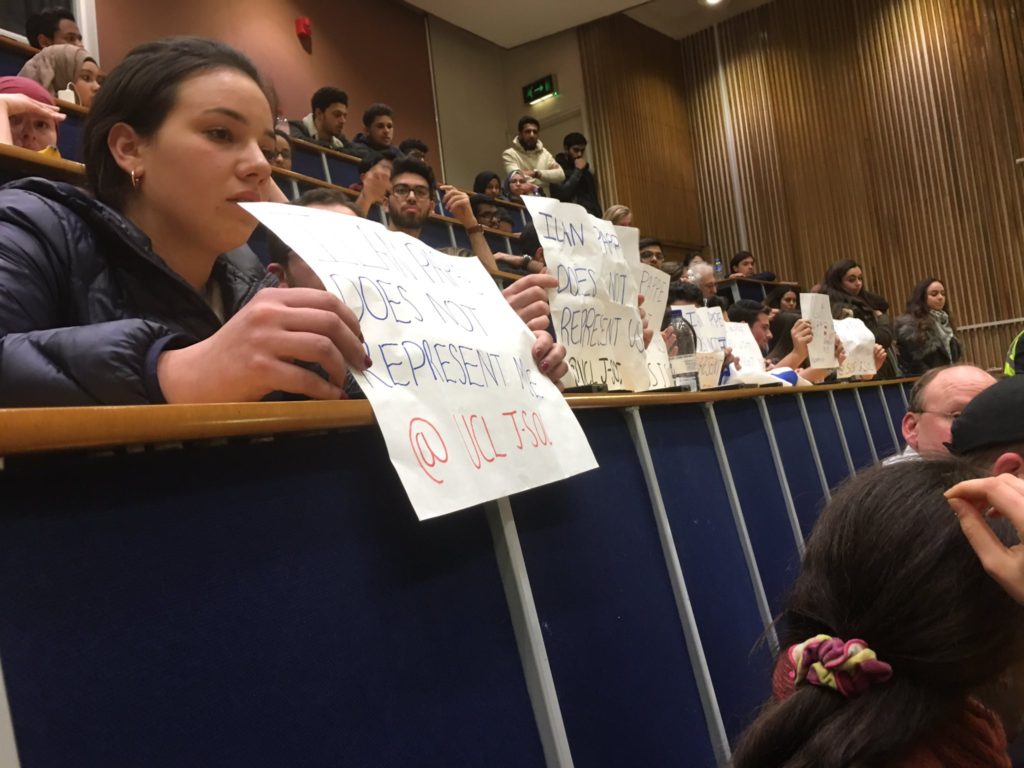 of speaking for the Jews in the room, these students were stating the obvious: That Ilan Pappe cannot define antisemitism for British Jews.

These students deserve our thanks, our recognition and our respect. Throughout a difficult two weeks, they have maintained, dignity, they have stood in unison, and they have proudly represented British Jews, Zionism and Israel. It has been inspiring to watch the young students standing up to Jew hatred, standing up for what is right, standing up, proudly, holding their identity aloft.

And that attitude was carried by the students outside, once the event ended. As I left, I noticed that crowds had gathered around the Jewish students. Each of them, every Jewish student, fighting for the true narrative to be heard.

It was here that the greatest failure of the university became plain to see. As Jew and Arab, Zionist and anti-Zionist, began to discuss the conflict, seek ways of understanding each other, people were visibly listening to the exchange. But it all occurs *outside* of the university walls. Inside, the university allows the extremists to dictate, to incite, to divide, to cause hatred. Outside, the students were willing to engage. This is the role of the university upside down.

As I watched the exchanges with fascination, there were two people trying to get the anti-Israel activists to disengage. One was the head of the UCLUFOP, the other, the ex-head of the SOAS  PalSoc. Annoyed by the dialogue, these groups are visibly alienating students, actively trying to stop debate and for whatever reason, the university has chosen their path, rather than the path of dialogue.

Until the university can work towards bringing what was taking place outside, into the campus, into the lecture rooms; to allow for vigorous debate and for both sides to engage with each other, the situation will continue to deteriorate. You cannot blame the students, I was there and saw the desire to talk. They have been let down by cowardice.