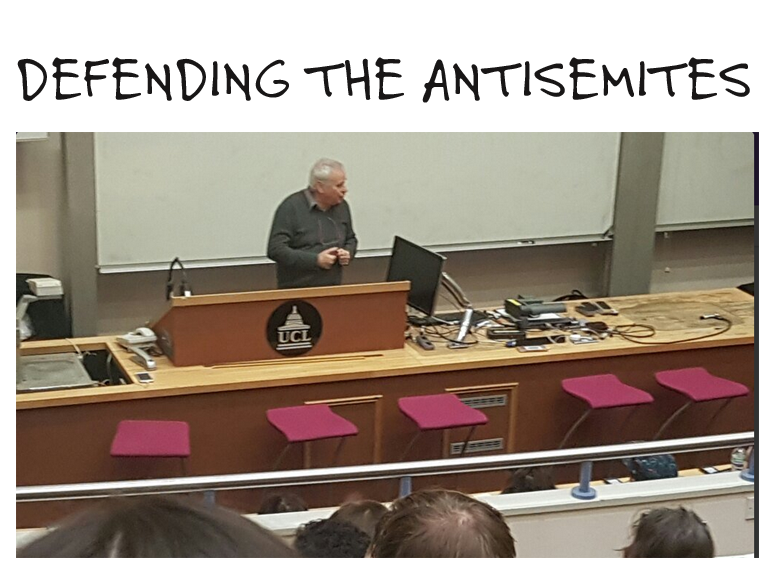 An open question to Ilan Pappe: Why do you defend antisemites?

Given the event last night at UCL (7/3/2017), I have split my response into two pieces. One is a direct accusation against the university, the other (this) an open post to Ilan Pappe. I did intend to ask this question, but was not chosen during the Q&A.

I have seen you speak many times. Although I disagree with almost everything you say, I acknowledge you are an accomplished and polished speaker.

I reject those that quickly place anti-Israel activity into the antisemitic box, and I do separate you from some very vocal antisemites. Gilad Atzmon for example, or Oren Ben Dor. When they speak, they talk of problems with ‘Jewishness’, or ‘Jewish pathology’. I have never heard you do this.  Your arguments focus on historical distortion and extreme left wing political ideology.

It is a matter of historical record that you were born in Israel. When I refer to history, I do so in the understanding that an event happened the way I suggest.  Many of your accusers have suggested you manipulate facts to suit your ideology.  Or deliberately twist history to further your political agenda. Apparently you have admitted this.

Before you suggest this is all distortion, misquote or hearsay, I bring you an example I witnessed myself at an event on 25 May 2016 during an exchange with Palestinian activist and scholar, Ruba Salih. You had questioned the Palestinian ability to lead. Ruba had brought BDS as an example of a movement being Palestinian led. The following exchange is stunning:

You can see this exchange with Ilan Pappe on video here:

This admission, that ‘truth’ can be hidden for ideological reasons, should discount you as a historian. Only in the warped environment of current academia, can a historian suggest the truth should not be told about a historical event, and everyone carries on as if nothing had just happened.

So, the first part of my question relates to how far you are willing to go to defend your ideological position.

I recently conducted research into antisemitism in the left. I took an event, being the anti-Netanyahu demonstration on the 6th February, and focused on the motivations of the protesters. Within those identified, I found over 40% had shared several antisemitic posts relating to global Jewish conspiracy. Nothing to do with Israel, but rather classic antisemitic tropes.

Holocaust denial, global conspiracy, Jews controlling the world. All people standing together waving the Palestinian flag. Over 40%. This is not a figure that is easily discarded.

Question number one. How do you justify defending, or providing cover for such blatant Jew hatred, denying its existence, and weakening the Jewish defence against such antisemitic attacks, all in support of your ideology?

The second part relates directly to your absurdly fanciful political ideology. The utopian world that you describe, the one that provides the pillar for your entire political position. We both know that currently such a place does not exist. We also know (as people who study history) that we can call on many examples from the past, where such vision became a field of blood, as human failings overtook radical idealistic thought.

Surely, you should set about proving it possible elsewhere, and then invite the Jews to the party once it succeeds.  One can hardly look at the Middle East, or anywhere currently on our planet, and gain confidence. How can anyone support the idea that within the current sea of blood, the Jews ‘of all people’, should rely on your assurance that human beings can live in peace and equality.

Don’t you think then, that it is incumbent on idealists such as yourself, and others that align with you, to create this utopian vision as a reality first? Or given Jewish history, don’t you think it absurd that you seek to use the Jewish state as a guinea pig?

I look forward to your response

5 thoughts on “An open question to Ilan Pappe: Why do you defend antisemites?”