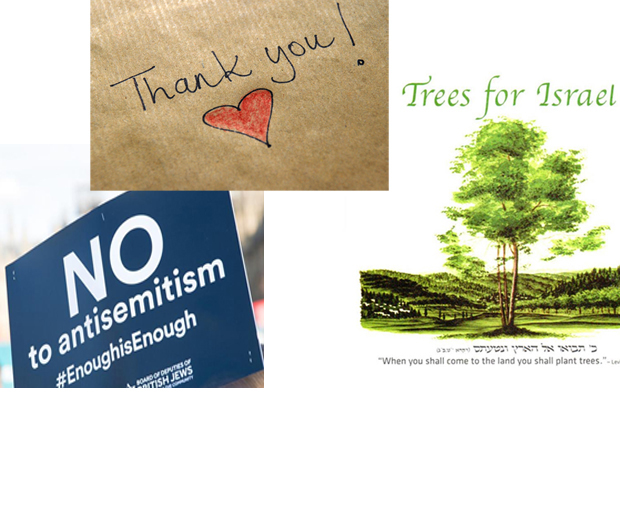 Plant trees for those that stand with us #TreesForOurHeroes

This is the start of a campaign to plant trees in Israel for those heroes that have stood by the Jewish community when we needed them to help fight rising antisemitism.

Jewish people in the UK are facing rising antisemitism. It is part of a global trend, but since 2015 we have seen a sudden and worrying increase within the UK. The Jewish community has understandably mobilised, but we have not stood alone.

Fortunately there have been many of other faiths – and of none – who have been willing to offer support.  In some cases this has brought them abuse, threats, isolation in their workplace or from family and friends, even expulsion from community organisations – only because they have been brave enough to say #enoughisenough and stand alongside us against rising antisemitism.

Whether it is a friend, a colleague, someone you met because you are both fighting antisemitism, an article you read, a speech you heard or just because someone told you about them – as a community we should recognise that these friends have stood with us when we needed them.

Jews are a small minority. Jewish people are not in every room. As the hate spreads a long way from Jewish areas, it takes a brave person to stand up alone in a hostile room and fight back against the spread of #antisemitism. These people could just keep quiet, but they haven’t. They stood up for us. It is not about whether the battle is ongoing or not. As a community we should recognise them for what they have done and say thank you.

There are those out there we see and hear. But there are also those out there who don’t even know the names of – teachers, union members, councillors – their names should be gathered – the trees will make sure the memory of what they have done will not just pass or be forgotten.

The #TreesForOurHeroes campaign is a campaign of donate / nominate. We need

– donations to plant the trees

– nominations to know who we are planting the trees for.

I have opened public donation campaigns on both these websites. Donations can be made on either. All the money goes to the JNF to plant mature trees in the Negev:

Donate on either of these pages

Nominations should be sent to trees@tillescentral.com – If you nominate by email – send a few details (optional but desired). The name can be a friend, a politician, a member of the press, your neighbour or someone you have heard or read about. If it is someone who wishes to remain anonymous – that’s okay too. Tell us and shield the name. We can plant trees for those people too.

I want us as a community to plant trees for these heroes in Israel. #TreesForOurHeroes. Please share this blog or either of the two funding pages as widely as possible.

You can donate without a nomination and nominate without a donation. Both the gathering of names and support for the planting of trees are important to this campaign.

The targets are rolling. If they are reached, I will raise them. Because the campaign is run here, you do not have to donate for a whole tree (£50) you can donate less or more. If you donate but do not nominate, that money will be put towards trees for the heroes nominated by others. You do not have to be Jewish to donate. These people have done *society* a service and it is an opportunity to thank them.

Certificates will be issued for as many of our friends as trees we can plant.

I have started by donating £50 to each of the campaign websites. I have also nominated Emma Feltham and Euan Philipps, two of the people who have publicly been abused for standing alongside us.

These courageous friends have tried to ensure that antisemitism in the UK is driven out of the mainstream. Let us show our gratitude by embedding the memory of this alliance in Israeli soil.

The main links to the campaign are in the piece above. Whilst this campaign is active, all new donations that this blog receives will be forwarded to the #TreesForOurHeroes campaign.