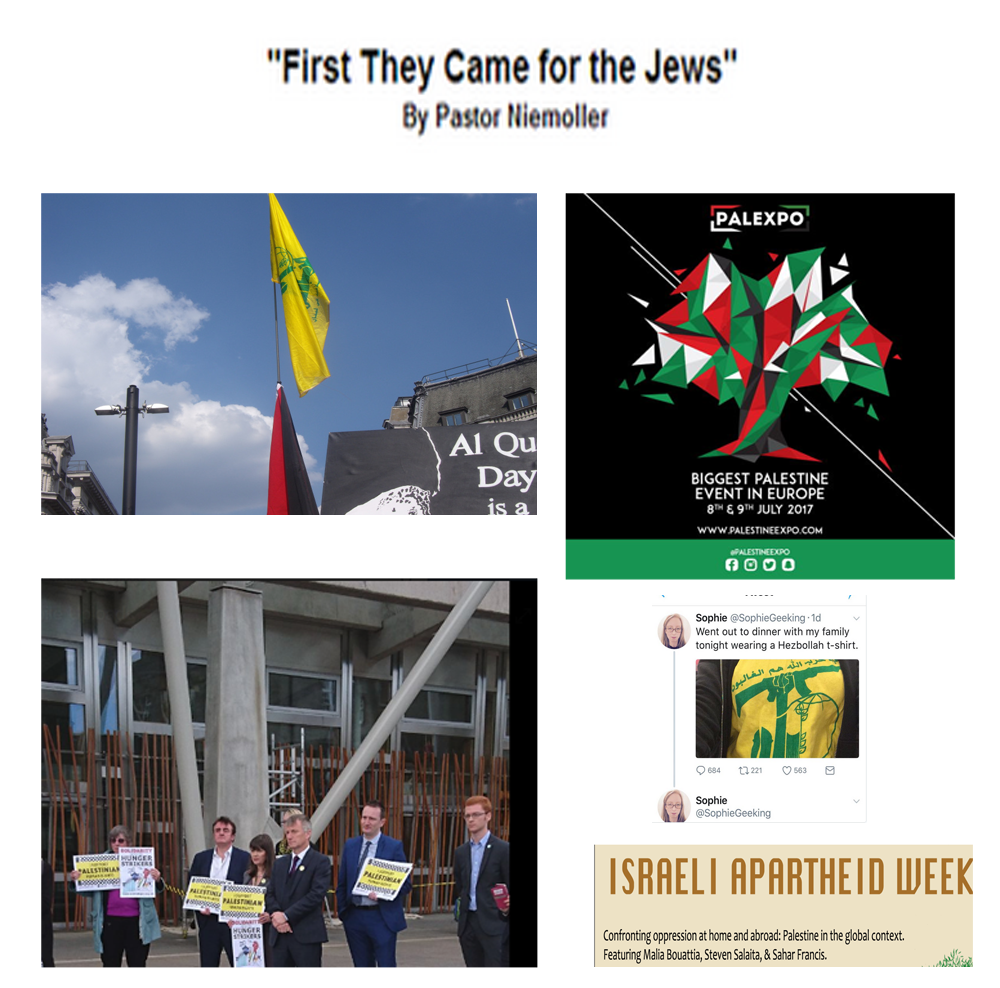 What if they were ‘coming for the Jews’. What would you do?

There is an oft repeated poem that begins ‘first they came for the socialists’. It was refined over several years by German Lutheran pastor Martin Niemölle as he described the general cowardice of German intellectuals during the rise to power of the Nazis.  The central message is clear and it can be adapted easily to suit the person who wishes to use it. Given the background, Jews are always one of those they came for.

So what would happen if they did ‘come for the Jews’?

The UK in May

What would the Scottish Parliament do if Scottish thugs really came for the Jews?

On 18th May, antisemitic thugs came for Jews in Edinburgh. The Scottish Palestine Solidarity Campaign (SPSC) walked up to the Scottish Parliament building to protest the arrival of an Israeli Ambassador on Scottish soil (no, this is not about Zionism, read on). 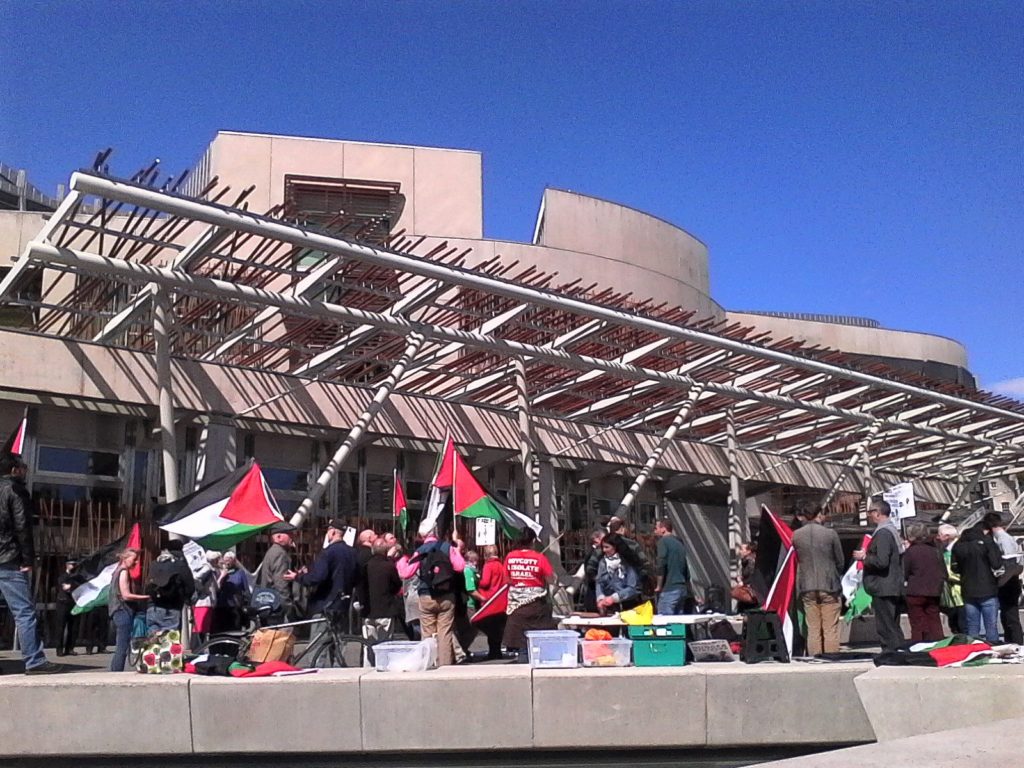 In that small crowd, here is an image of one SPSC activist (‘Alba Palestina Romano’): 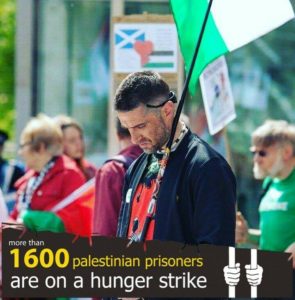 Here is another, ‘Billy Hendry’: 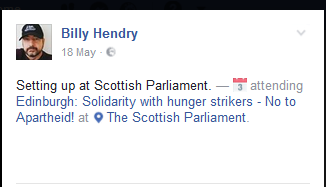 Here are some of their posts. These are publicly available on their FB accounts: 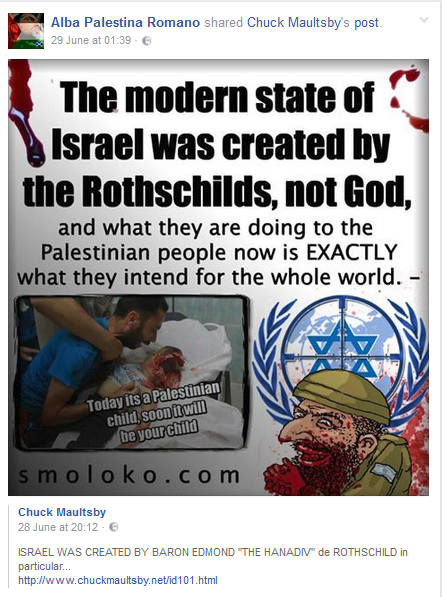 Smoloko.com (NSFW) is a brutal antisemitic site that promotes Holocaust denial. Another post: 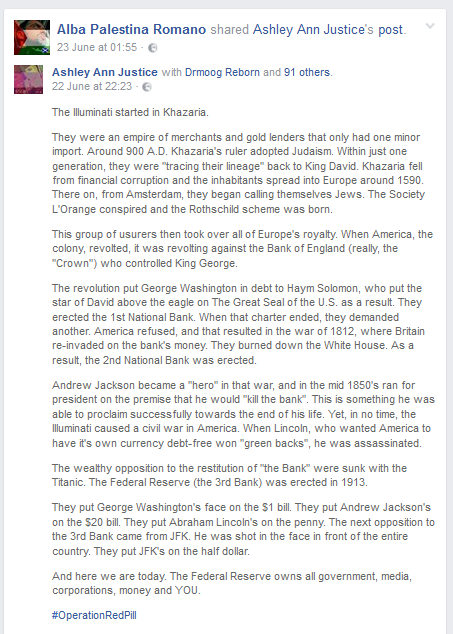 Khazarian ‘fake Jews’ control and own everything.

Here are some posts from Hendry: 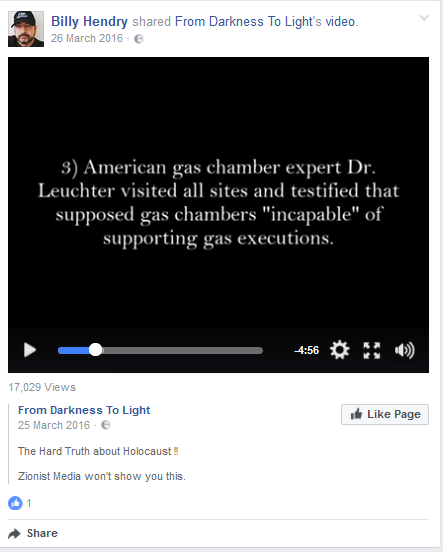 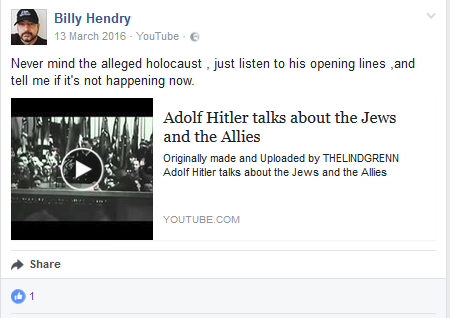 The ‘opening lines’ mentioned, were about Jews leading the world to war and having to pay a price. (Video link – NSFW).  Clearly, like most hard-core anti-Israel activists, these thugs are conflating their attitudes towards Jews with sympathy for Palestinians. . So what happens when antisemitic thugs ‘come for the Jews’ outside the Scottish Parliament?

When it comes to choosing sides, the antisemitic thugs get their support. Here is the protestor who spread Holocaust denial material proudly showing the solidarity:

So proud of this ‘solidarity’ are the MSP’s, they openly blog about it: 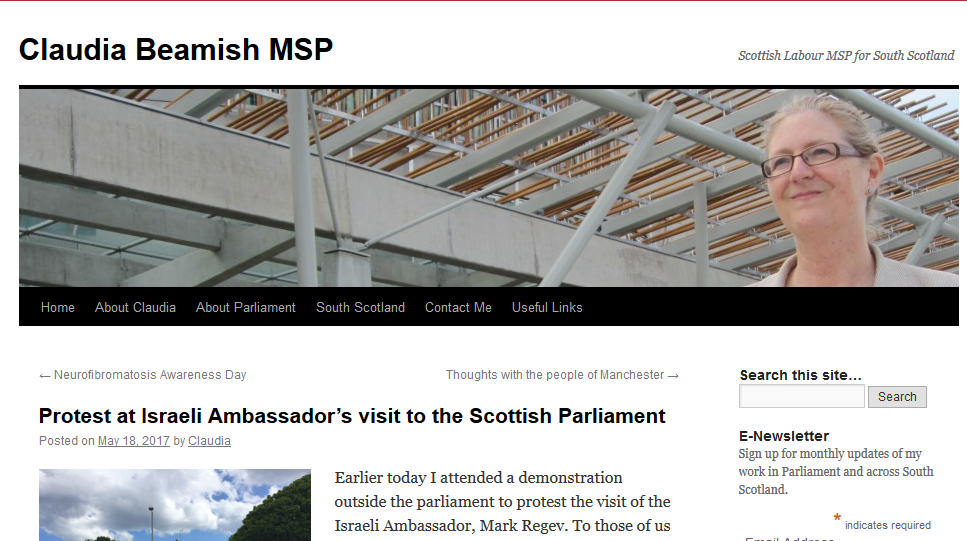 That is what happens in Scotland, when antisemitic thugs come for the Jews.

The UK in June

What would the London’s Mayor do if they came for the Jews in London? We know the answer – they would let Hezbollah flags occupy Oxford Street. 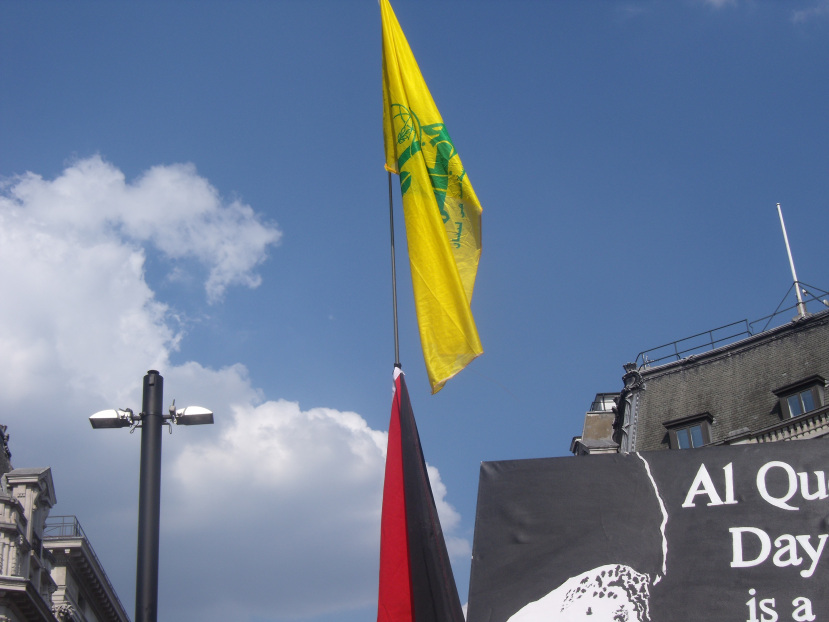 The Al Quds day march is simply a march in solidarity with radical Islamic terror. Designed in Iran after the revolution, this day sets out to unite those professing Islamic hatred of Jews. So rabid is the ideology behind it, that several anti-Israel organisations step back and will not associate openly with it.  The terrorist group Hezbollah are openly supported during the march. The only difference between the ideology of these radical Islamic terrorists and the ideology of those spilling the blood of UK civilians in Manchester and London, is that these Islamists focus on the Jews. If Hezbollah were to announce tomorrow that with immediate effect, their targets now included all enemies of Islam and not just Jews, they would never receive permission to march in London again. The ‘permission’ exists only for as long as it is a ‘Jew only’ policy. It really is that obvious.

At the march, in an openly antisemitic attack ‘the ‘Zionists’ were blamed for murdering the innocent victims of the Grenfell fire.  In the context used in the video, the word ‘Zionist’ makes no sense, it only works when it is translated back to ‘Jew’.

One of the speakers was Sandra Wafta from ‘InMinds‘. Here is an image of Nazim Ali (the man who accused the ‘Zionists’ of murdering the Grenfell fire victims), handing the microphone over to Sandra Wafta at the event. 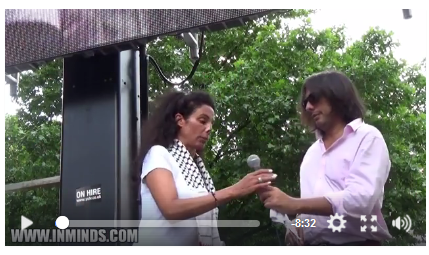 Wafta is one of the most prolific activists on the London anti-Israel scene.  These are some of her posts:

The next is a ‘Brother Nathanael’ video. Another rabid antisemite with a fixation on ‘Jewish control’. This is his YouTube channel: 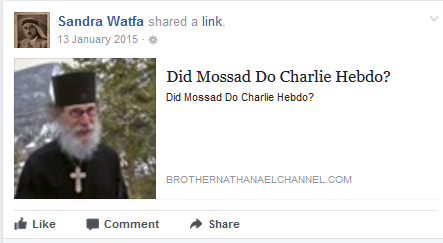 So what happened when the Islamists came to attack the Jews in London? They were given permission to march through the central streets of the city, waving their flags as they went.

The UK in July

In July there is the ‘Palestinian Expo’. 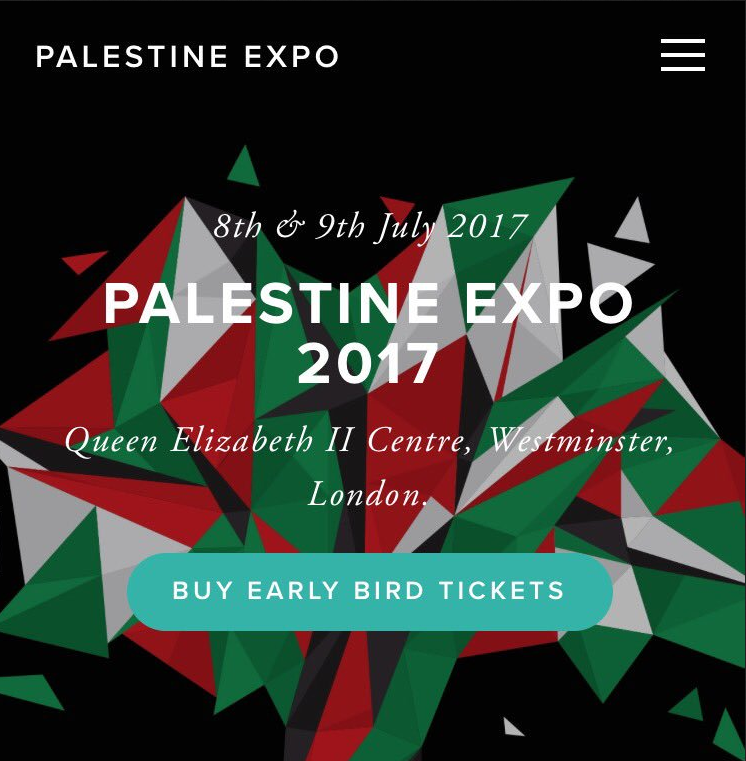 A two day event, taking place at the prestigious Queen Elizabeth II centre in Westminster. Five floors of activity. Organised by Friends of Al Aqsa. Another Islamist event taking place in a city under attack from radical Islam. The organisers had this to say about the event:

“Palestine Expo will be the biggest social, cultural and entertainment event on Palestine to ever take place in Europe.”

So I paid a visit the website. Looking for evidence of the ‘social, culture and entertainment’ activity. As soon as you actually look beyond the promotional material, the tone changes.

“Join the top names from the worlds of media, politics and activism for an enlightening and empowering day.”

You then find out the live entertainment isn’t part of the exhibition at all, but rather a separate one off evening event that requires a separate ticket. And it turns out, that the main event isn’t cultural at all either.

The ‘about’ section, is just a page about Balfour, the ‘Occupation’ and the ‘Siege on Gaza’. Standard anti-Israel rhetoric.

“It is the combination of these tragic episodes for the Palestinians that we are marking. This is the time to unite and be a part of the movement to end their suffering. Palestine Expo will be the major platform pushing to end the oppression of the Palestinian people.”

What happened to the cultural event?

Then the list of speakers, is just a who’s who of anti-Israel activists who tour the university circuit during ‘Apartheid week’ to tell lies about Israel to students, and whip up hate against ‘Zionists’ (read the vast majority of UK Jews). 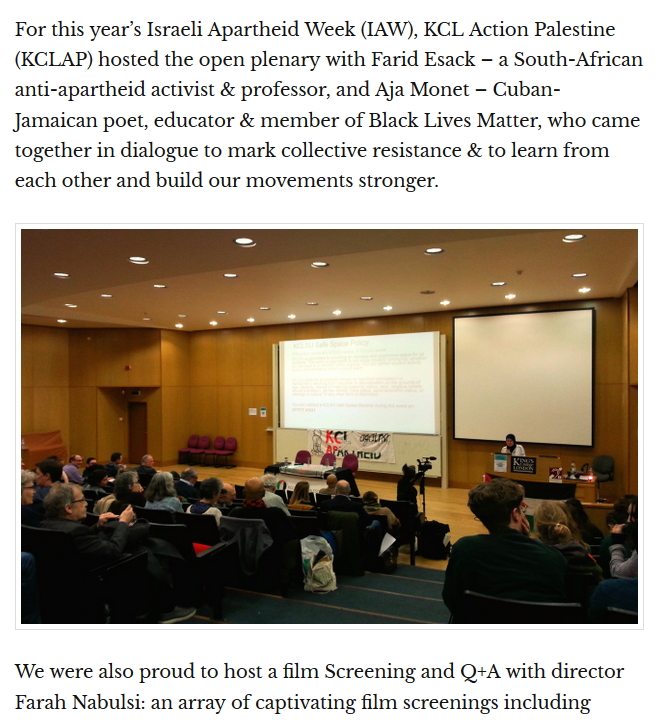 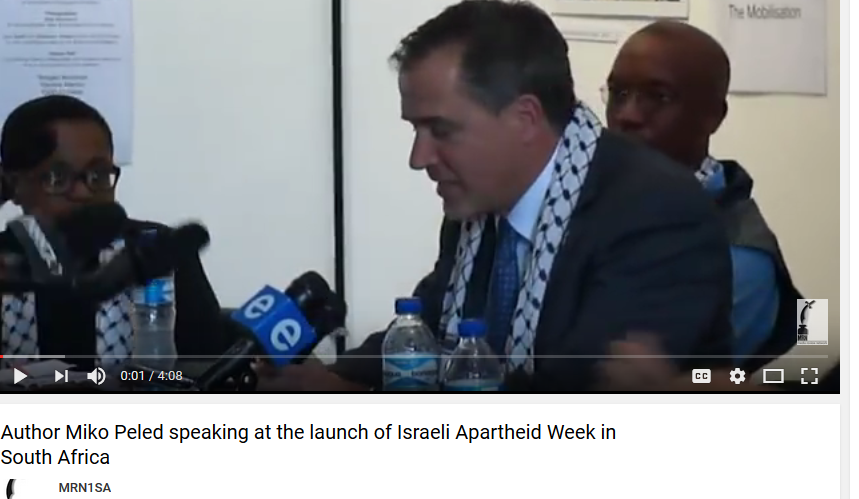 In February the government issued guidelines clamping down on ‘Apartheid week’ so students “do not suffer discrimination, harassment or victimisation”.   A government that had said ‘enough is enough’, and claims to have understood the clear link between antisemitism and anti-Israel activity.  How feeble and weak minded their resolve. All that needs to be done is to re-label ‘Apartheid week’ as a ‘cultural event’, and the newly empowered lynch mob can continue spreading the same propaganda without restriction. It really is that easy.

That is what the government did when they came to spread poison about Jews in London. They gave them the Queen Elizabeth II centre in Westminster so they could spread that poison in style.

What is in a word?

Just replace the words ‘Apartheid Week’, with ‘cultural event’ and you can rent out the QE2 building. You do not need to change anything on the program.

Just replace the words  ‘support for radical terrorists ‘, with ‘support for Al Quds’, and you can still wave your flags. In fact, you can wave them through Oxford Street.

Are you a Holocaust denier? Not to worry, just pick up a Palestinian flag, protest against the Jews, and Scottish Members of Parliament will stand in solidarity with you.

It doesn’t matter how blatant the cover up is, the thinnest layer will do. A good example of this can be shown here. It is from an article that was shared many times last year amongst anti-Israel activists. 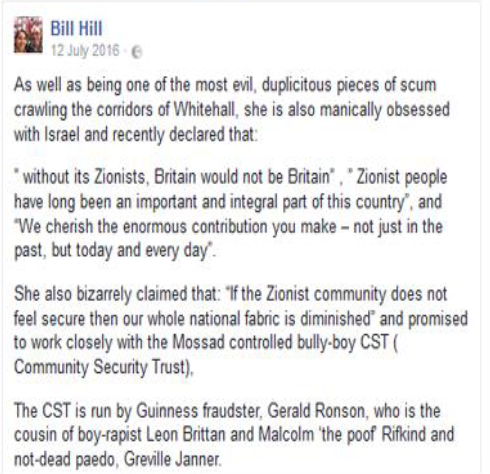 The original article seems to be from the ‘Ste Matthew Murray‘ blog.   The only problem of course is that the quote has been butchered.  It is from a Theresa May’s speech that addressed Jewish concerns over rising antisemitism in the UK.  However, it is difficult to attack the real speech without crossing over into antisemitism. Why? Because Theresa May had spoken about Jews. The answer was simple, they just changed the word ‘Jew’ for ‘Zionist’ inside the quote. Nobody cares. Hey presto, attacking Jews via a falsified quote becomes ‘legitimate criticism of Israel’. It really is that easy.

Where hating Jews is tolerated

Antisemitism is tolerated in a way no other racism would be. If Regev was an ambassador from an African state, and a group of racists who promote deeply offensive racist material, turned up to hound and abuse the ambassador. There is little doubt the police would intervene and arrest those present. Holocaust deniers and those that spread conspiracy tales about Jews? They get solidarity. All they have to do is wear a mask.  So too with the Hezbollah march. As radical Islamic terrorists spill blood on the streets of our cities, Hezbollah are free to march through Oxford street.  This Saturday in the QE2 building in London, people who regularly lie about the Jewish state will gather to do so in luxury. How can they do this? Because they put the word ‘culture’ into the event title.

This week a student at Edinburgh university posted this on twitter: 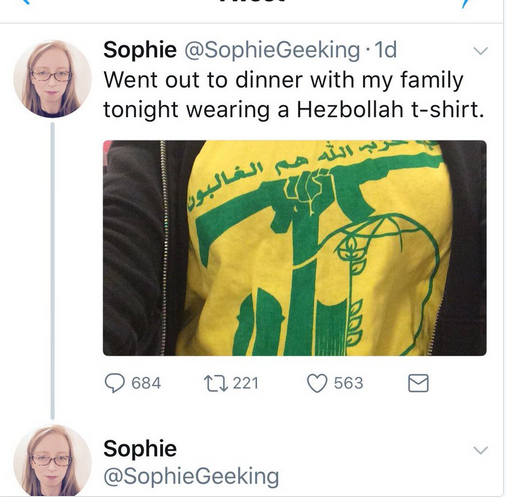 As Islamic terror spills civilian blood on the streets, a student proudly wears a radical Islamic emblem to ‘dinner’. Perhaps she thinks it is funny. This dangerous naivety is an absolute failure on the part of our society to gain a footing on what is becoming an increasingly slippery slope. If you do not draw the lines clearly, they become blurred. If all blood is not equal, then Jewish blood becomes cheaper. You can wave the flag in support of Hezbollah’s political wing? You are having a laugh at the expense of increasingly unsettled British Jews.

It is a choice

There are those that are coming for the Jews.

At the moment the Scottish Parliament stands in solidarity with them, the Mayor of London allows them to wave radical Islamic flags in Oxford street and the Government of the UK gives them permission to use the QEII building to promote their hate.

You can choose what it is you see. You can view the people outside the Scottish Parliament as anti-Israel activists and turn a blind eye to the rabid antisemitism. You can choose to see a march down Oxford Street as a message of solidarity and excuse the Jew hating Islamic flag. You can see a cultural event at the QEII in London and ignore the fact it is simply the same old hate-fest dressed up in a tuxedo.

It is your choice to decide what you see and what action you take. ‘Palestinianism’, or anti-Israel activity, is clearly a fetish for the antisemite. They are coming for the Jews. What will you do?

33 thoughts on “What if they were ‘coming for the Jews’. What would you do?”