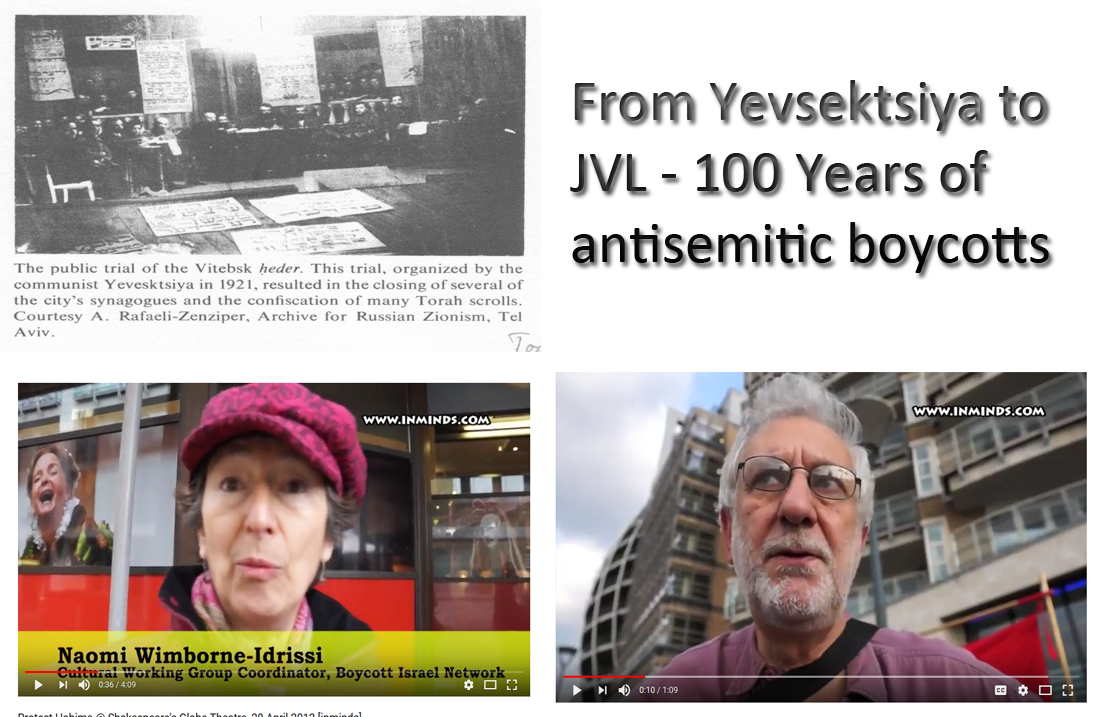 How is this for a fun fact: A small group of anti-Zionist Jews set out to oppose Habima theatre, discredit them, have them boycotted, and remove any official support they received. These people wanted Habima, and their ‘Zionism’ sent packing. Does it sound familiar? It shouldn’t, because those responsible were not ‘Jews for Boycotting Jewish Goods’, they were the communist ‘Yevsektsiya’ and these actions were taking place almost a hundred years ago.

We can now jump forward to 2012. These are two of ‘Jewish Voice for Labour’s’ senior officials, Naomi Wimborne-Idrissi and Mike Cushman protesting the presence of the Habima Theatre in London:

Once again stripping away at history presents us with evidence that the cart is being placed before the horse. Over 90 years ago, before Israel and before any ‘occupation’, Habima theatre was being boycotted by those on the radical left. There was no ‘Palestinian solidarity’ involved, in that early boycott. In history we find today’s truth, so let us take a quick look.

We all know how this ended up being played out. Hitler removed Europe’s ‘Jewish problem’ from the planet. The removal of the six million Jews so definitively solved the problem, it is difficult to place the argument into context today, mainly because the ‘problem’ is no longer around to be analysed.

At the time, nobody really disputed the existence of a problem, and the critical arguments took place only over the solution. A battle of antisemitic wills took place, one under the flag of Nationalism, the other waving the ‘Red Banner’. One which sees Jews as a race of enemy aliens within, the other that sees Jewish identity, rather than the Jewish person, as the central threat.

Driven by a thirst for conquest, Hitler’s Nationalism, created the paradox that was to see the birth of the ‘Final Solution’. Communist antisemitism however, set about attacking two pillars of Jewish identity, the national (Zionism), and the religious (Judaism).

Crucially, the argument over the ‘Jewish problem’ was dealt within Jewish circles too. There were many different opinions, but in truth, there were two central positions. The national movement (Zionism), that saw the answer in Jewish self-determination, and the other was the Jewish Labour Bund, that believed semi-autonomous pockets of self-identifying national groups, could cohabit, and this would alleviate the pressures of conflicting national movements.

The Bundist movement was almost wiped out by the Holocaust. The Bundist position, the idea that Jewish people did not need a land of their own, burnt in Auschwitz.

Zionism didn’t win the argument because of the Holocaust, Zionism won because it was so tragically right.

We cannot know how many Jews would have made it out, had the British not reneged on their Mandate commitments, but we do know it would have saved some. When it comes to seeking apologies from the British, 2039, the 100th anniversary of the disgraceful White Paper, will be a date to knock on their door.

The Jewish solution had to be born in some type of national solution, because communism offered no space for refuge. Both Jewish nationalism and the Jewish religion were under attack from the Red Banner. To further this aim, a group of communist Jews, mainly ex-Bundists who had joined the cause of the ‘October Revolution’, were recruited to ‘carry the communist revolution to the Jewish masses’. Standing in opposition to Zionism and with an anti-religious stance, this group was called the Yevsektsiya.

Their role was explicit. It was to attack Jewish identity. In time, ‘every Jewish cultural and social organization came under assault.’. The stated mission was ‘destruction of traditional Jewish life, the Zionist movement, and Hebrew culture’ 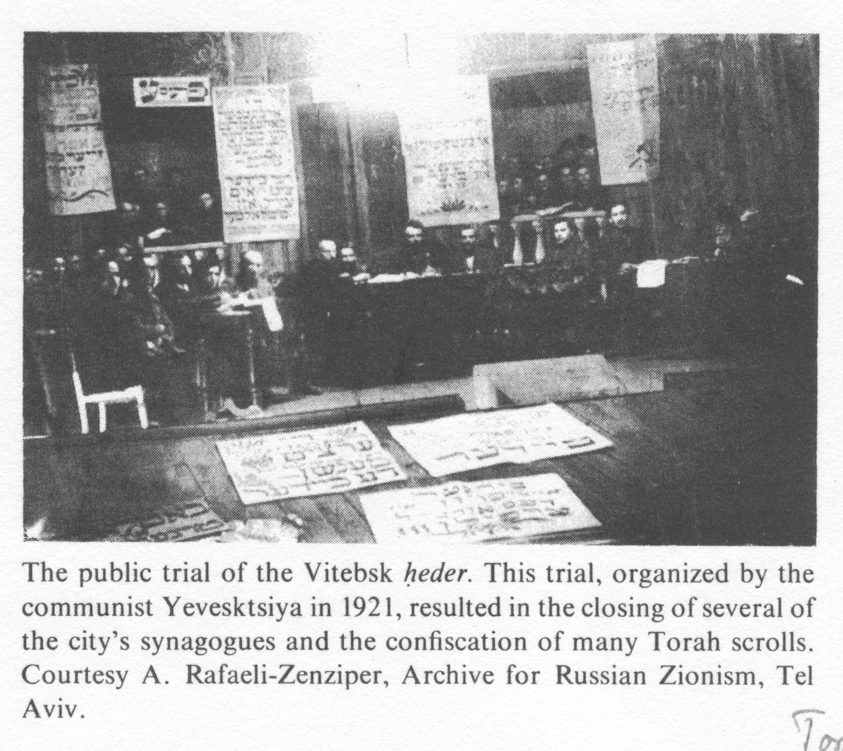 The Yevsektsiya, used the machine apparatus of the communists to spread propaganda, they staged demonstrations that made it looked like they had ‘popular support’ which in turn led to actions against both national and religious targets of the Jews. When the Zionists managed to show they had the numbers on their side, the Yevsektsiya ‘doubled’ their efforts. They used ‘legislation, persuasion and force’. Because they existed within the same political sphere, one of their primary targets was the ‘Bund’, which by 1921 succumbed and joined the Yevsektsiya faction.

JVL, the Yevsektsiya of today

The are too many parallels here to be cast aside. Arising from within today’s radical left, are those groups that see Jewish identity as a threat. We are seeing the deployment of a number of Jews to take Corbyn’s social revolution to the ‘Jewish masses’. They are used so the central movement behind them can deflect accusations of antisemitism. The number of Jews involved are tiny, yet their voices are amplified out of all proportion to their size: 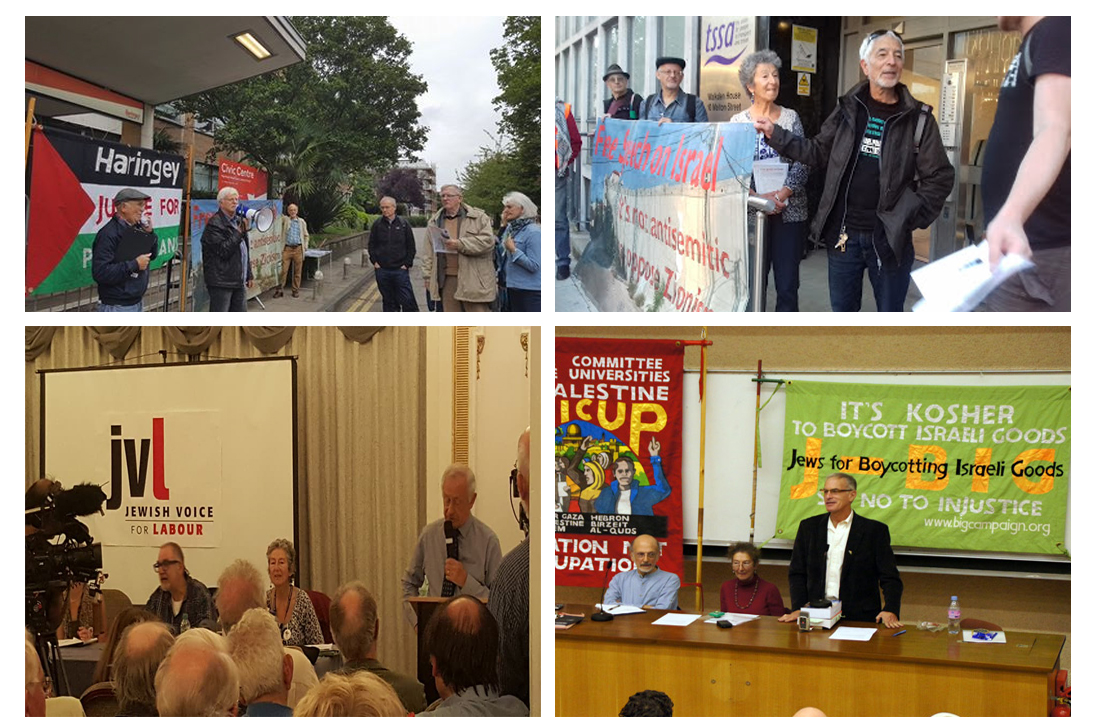 It is always the same faces. Idrissi, Cushman and co, simply hiding behind different banners and different ‘movement’ names. Free Speech on Israel, Jews for Boycotting Israeli Goods, Jewish Voice for Labour – it is all the same handful of radical left-wing Jews. They use propaganda to push their cause, suggest they represent the ‘popular movement’, and seek to restrict the standing of all the mainstream Jewish voices. These same people stand at the front of almost all British boycott Israel demonstrations. In a move eerily reminiscent of Yevsektsiya attacks on the Bundists, JVL’s early blows are directed towards the current Jewish Labour Movement, as JVL attempt to take ‘Jewish’ control of the party.

These same anti-Zionists even boycotted Habima Theatre, over ninety years since their ideological cousins, were doing the same thing in Russia.  The problem isn’t Israel, it never was, the issue is Jewish identity.

These few Jews are being used as a front to legitimise the attack the Jewish mainstream. The antisemitism is in the political deployment of that group. The over-use and over-amplification of the voice of that group. The institutional, ideological attack against Jewish identity currently receiving a standing ovation every time that Corbyn’s Labour gathers. The same signs go up at every rally. This from a recent Corbyn rally in Brighton: 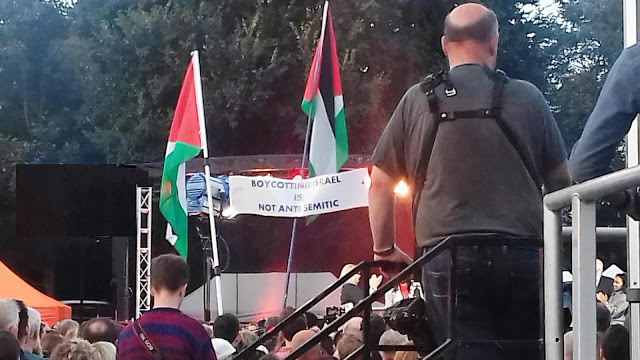 They are effective tools. Non-Jews cannot deal with this issue. When Idrissi says ‘as a Jew’ during an interview, she expertly disarms the reporter. Yet the question has to be why is she there being interviewed in the first place? Why are 5% of Jews given so much airtime? Why is it, that every-time the Jewish mainstream is given representation, these 5% must be given equal time? They are nothing, nobodies, irrelevant. we shouldn’t even know their names. These people are the Yevsektsiya of today, a group deployed to serve an ideological purpose in the current war against Jewish identity. Why are they ever-present? The answer is antisemitism.

You can be religious and not Zionist, you can be Zionist and not religious, but you cannot be both anti-religious and anti-Zionist in the Diaspora without bringing about an end to the Jewish family tree. Imagine for just one moment, that JVL gave a representative face of British Jews. Imagine that all Jews were like this. How would the Jewish people look in two generations? They simply wouldn’t. JVL represent the ‘communist’ answer to Judaism, the eradication of the identity. Their way, the Jewish people would simply cease to exist.

The propaganda involved is staggering. Calls to restrict the over-amplification of the voice are met with accusations of ‘suppression’. Apparently, this ideologically driven antisemitic hate, should be allowed to develop freely. Perversely, they turn criticism of the group on its head, suggesting that opposition to these Jews is the only real antisemitism in the room. Look at this vile tweet from Asa Winstanley:

That’s antisemitism right there. Winstanley is using today’s Yevsektsiya to attack Jewish identity, both in the national and religious sense. The group are putrid, yet Winstanley hides behind them for ideological reasons. As does, rather unsurprisingly, Ben White: 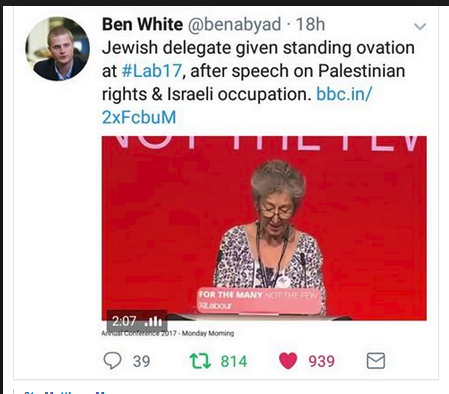 Ben White. 814 retweets. The same identifiable issue. The promotion of the ‘Yevsektsiya’. To see the antisemitic propaganda in motion, and to understand the intent, here is the headline from the Socialist Worker:

Here, the explicit aims of JVL are set out in the headlines. The article goes on to ‘big-up’ JVL. The group was created to deflect accusations of antisemitism. The same core reason for the creation of  the Yevsektsiya in 1918. If you know an anti-Israel activist, any of them, go and look at their social media pages. You will see it full of promotional material about the modern Labour Party Yevsektsiya. Legitimisers of Jew-hate.

Labour has an antisemitism problem. A problem it cannot even begin to address until the groups at the root of the attacks are rejected. About 300 people packed the hall at the JVL launch, to welcome the latest version of the Yevsektsiya to the political world. The vast majority were not Jewish. That non-Jewish crowd that came to seek legitimacy for their own hatred – inherently antisemitic.

The two union bosses, Unite union general secretary Len McCluskey and Aslef train drivers’ union president Tosh McDonald, both of who turned up at the event to promise their union’s affiliation with a hate group – antisemitic. Placing a microphone in front of Idrissi to artificially amplify the group’s voice- antisemitic. Hiding behind these Jews, promoting them, using them as a way of attacking other Jews, all antisemitic.

It is why the atmosphere at the conference was so bad. Only when this is understood and dealt with, only when the ‘it’s kosher to boycott Israel’ banners no longer appear at each Labour rally, can Labour move on. Labour needs, as a first step, to forcefully reject JVL, the group’s members and everything that the group stands for.