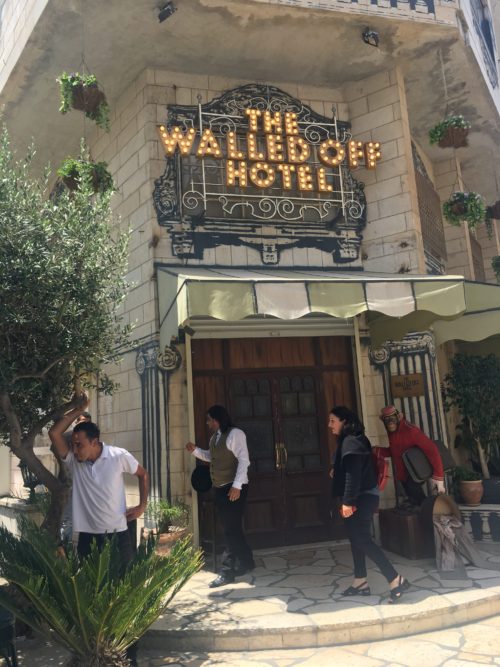 The post will be about my recent visit to the Banksy hotel and the historical distortion and antisemitic imagery that was on show there, but first a little background.  I recently spent a few days in Israel as part of a delegation led and facilitated by the Zionist Federation. It was a small group, led by Arieh Miller (ZF) and included representatives from Sussex Friends of Israel (SFoI), North West Friends of Israel (NWFoI) and the Israel Advocacy Movement (IAM).

Every member of the delegation has a firm grounding on the conflict history. They are also highly active in the fight for truth. This allowed the group to engage far beyond just reinforcing views already held. It was possible to meet up with groups that would challenge us and more importantly cross into Area A, land under full Palestinian control. It has been far too long since I had been to places such as Ramallah and it was a good feeling to be back there. This is the first of several blogs I will produce on some of what I saw.

One of the places that we entered was a trip inside a beating heart of the Palestinian propaganda campaign. The ‘Walled off Hotel‘, a Bethlehem hotel drowning in sickening imagery. A hotel that was financed by Banksy, an England-based graffiti artist and political activist. This is what we found there.

Splits across the great divide

We reached Bethlehem in a minibus connected to an East Jerusalem travel outfit. This means both the driver and the guide were Palestinians with East Jerusalem residency. The discussions with the guide were illuminating, but perhaps not as much as the drive itself. For a full day we moved between areas A, B and C, switching from Israel to Palestinian control and then back again. We did so almost without knowing. A bus full of people driven by a Palestinian went into and out of these areas without once having anyone’s identity checked. Important evidence to show that the ‘freedom of movement’ issue is a geographic and political one. This is not what Apartheid looks like.

Speaking to Palestinians with East Jerusalem residency is as illuminating as having a dialogue with an Israeli Arab. These days, talking to an Arab from Ramallah or someone inside Gaza (which I do online) also brings to light a central issue. That the Arabs are not ‘one’ at all, but ‘several’. Each different group (Israeli Arab, East Jerusalem resident, PA controlled Arab, Hamas controlled Arab) has a completely different outlook on the conflict. Consider it a spectrum. In general the closer an Arab gets to Israeli control, the less that he/she wants the Palestinian groups (Hamas, Fatah etc) to have any type of say in his/her life. I will expand on this, and the implications, in a separate piece.

The ‘Wall’ and the hotel

The hotel was opened in 2017 in line with anti-Balfour activity globally. I have no idea what Banksy thinks or knows about the conflict, but I do know that the hotel does nothing to promote dialogue. On the one side, it can be viewed as an obscene gimmick. A privileged activist gaining self-publicity through a stunt that objectifies people immersed in a real-world tragedy. On the other are the Jews, who are thoroughly demonised by the false narrative presented inside. Jews become alien god killers, too greedy and racist to open their arms to a peaceful downtrodden people.  In the middle are the useful idiots. Ignorant tourists who come to the hotel, see the exhibits and then leave slightly more radicalised than they were before they came. 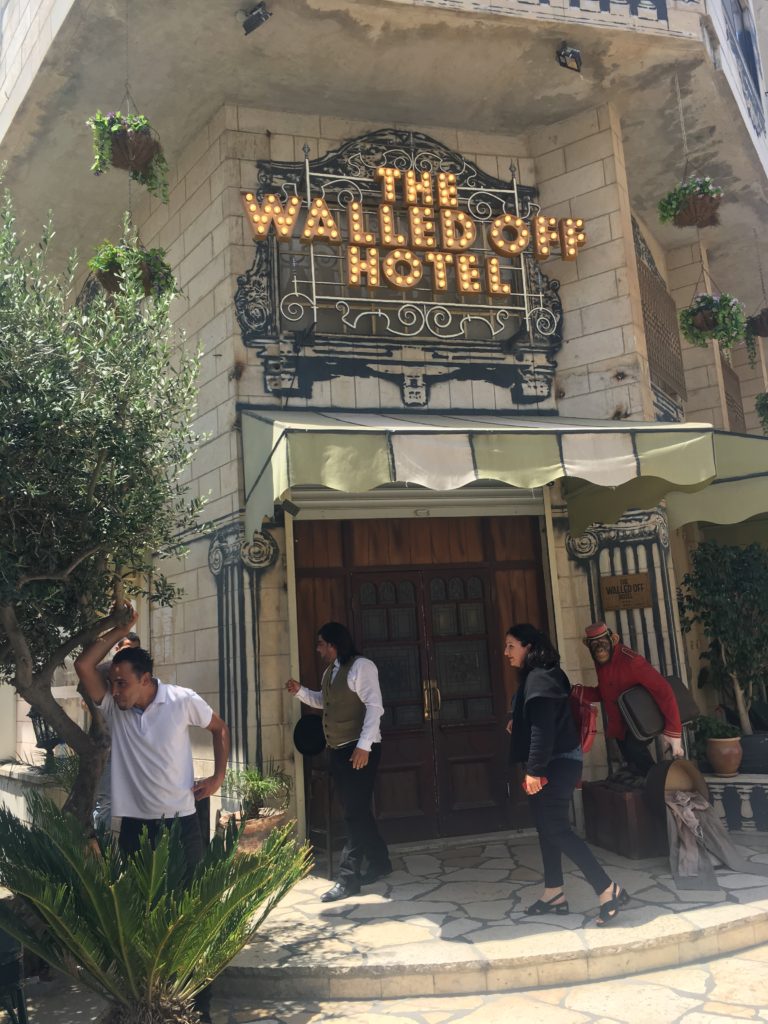 The Guardian, when writing about the hotel, described it as ‘playful and strongly political’. The hotel is not ‘playful’ at all. The Guardian article even references the history video presented below. That the reporter Emma Graham-Harrison watched the video and thought the only point she needed to reference were the closing remarks, shows how blind, dumb and ignorant those commenting on the conflict are.

Inside the museum are several videos. The most important one is the one which places the conflict into context. It never matters how balanced you want to seem, if you distort the history you are intentionally influencing opinion in your favour. The Arabs are continually rewriting history to have this effect. They want people to bridge the gap between the good (the Arabs) and the bad (the Jews).

It is difficult to overstate the historical distortion in the video. A clever piece of propaganda which uses additional imagery to convey further misconceptions. It completely denies Jewish history to the land and presents Jews as alien invaders. The only reason Jews turned up was because they had ‘nowhere else to go’. The Arabs inside the Mandate become innocent victims as all those around them fight. There is no connection at all to the tale in the video (the virgin Nakba) and what really happened. Anyone watching or digesting any of this video as fact has been tainted by antisemitic propaganda.

The Banksy Hotel and antisemitic imagery

Throughout the museum, there is use of Holocaust imagery, part of an ongoing strategy of equating the results of the 1947/48 civil conflict with the Holocaust. This one plays on both Holocaust and the idea that the value of life is not equal, with one Israeli tooth carrying more weight than over 2000 Arab lives.  (credit to SFoI, NWFoI and IAM for some of these images) 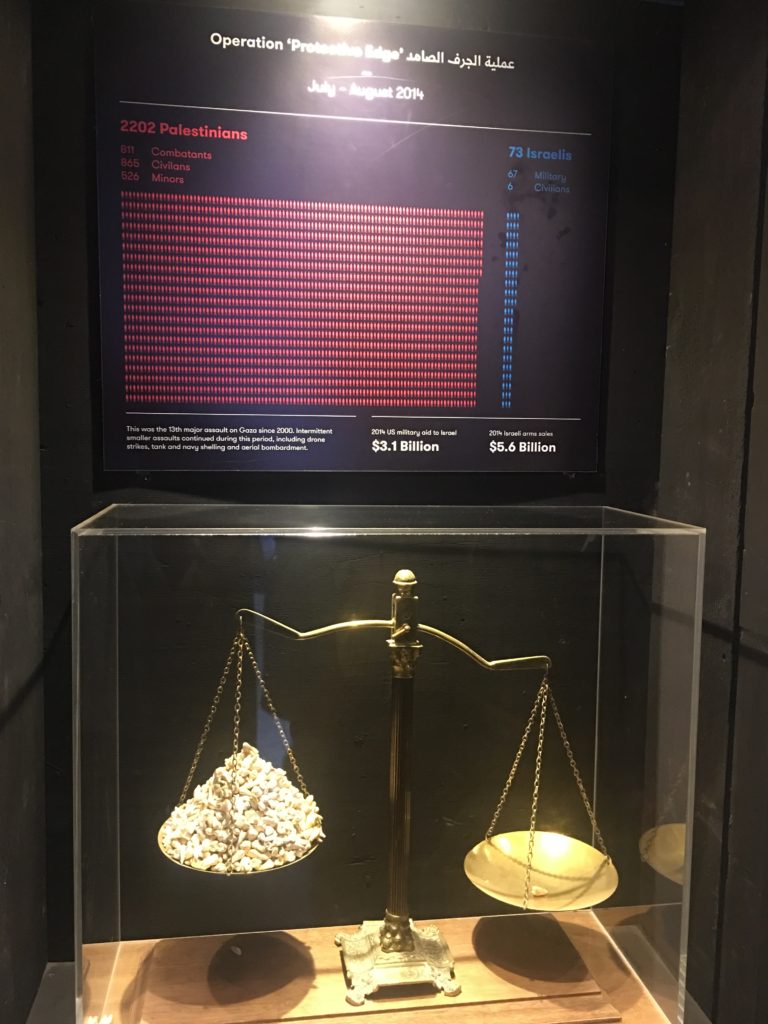 This one suggests Israelis kill for money. That Arabs die just so Israelis can test weapons and the conflict is only there so that Jewish business can thrive. 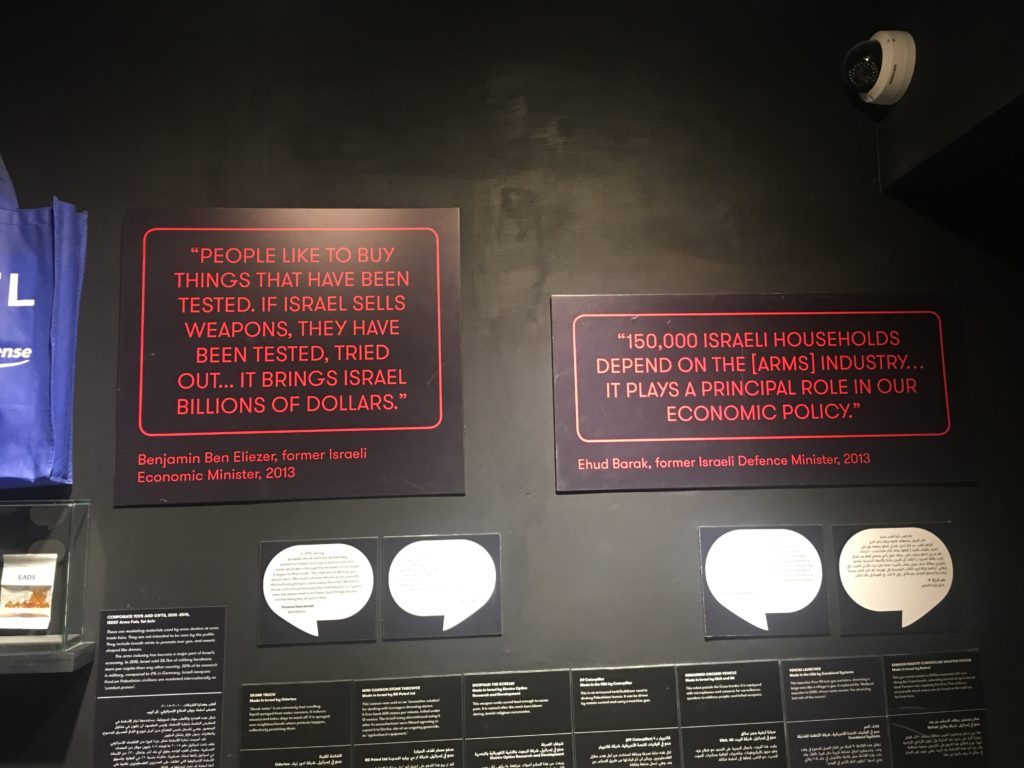 Babies, clothing, shoes. Everywhere you look is the image of a brutal Holocaust committed by money grabbing Jews upon a defenceless and helpless population. Devil against the angels. 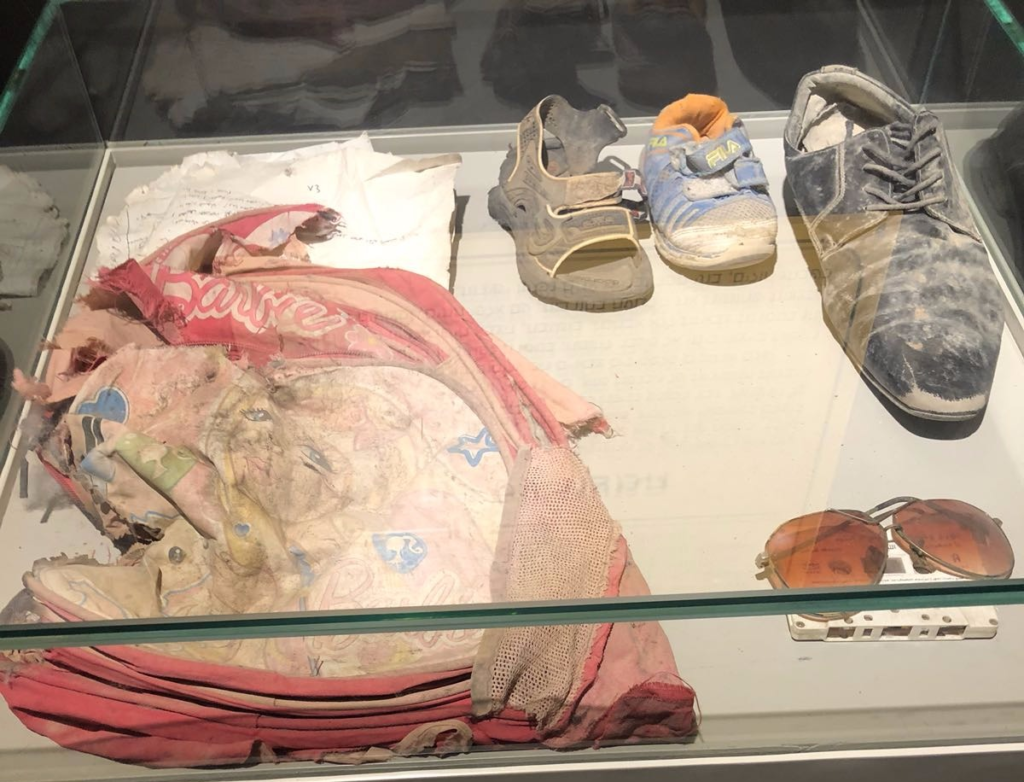 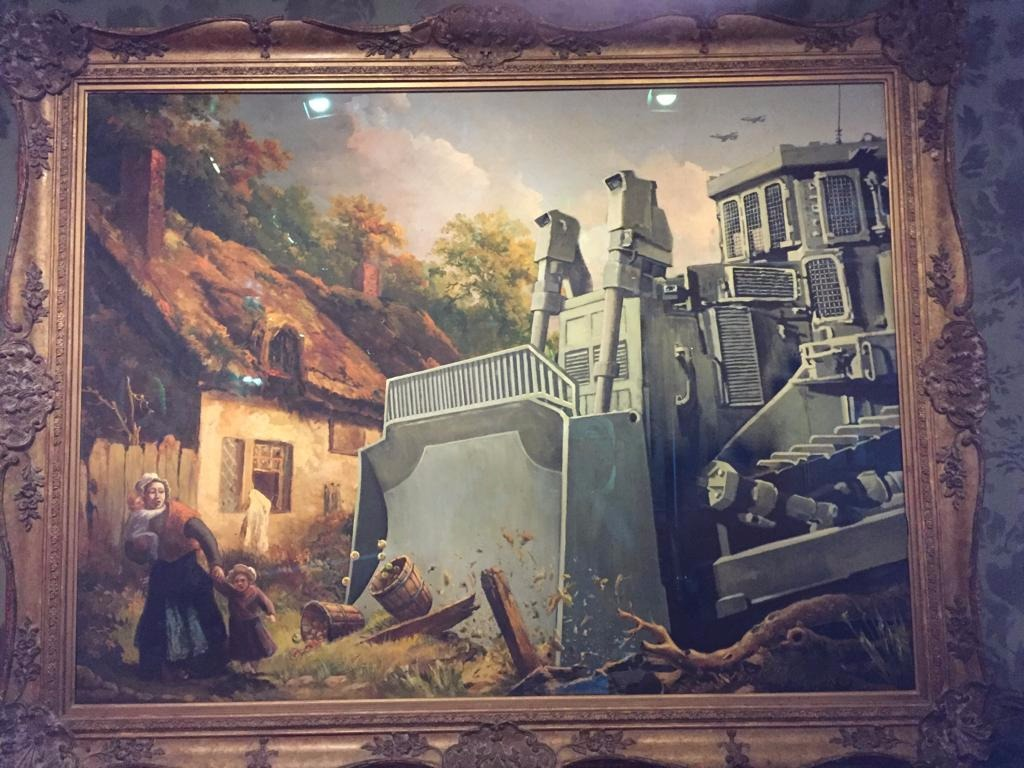 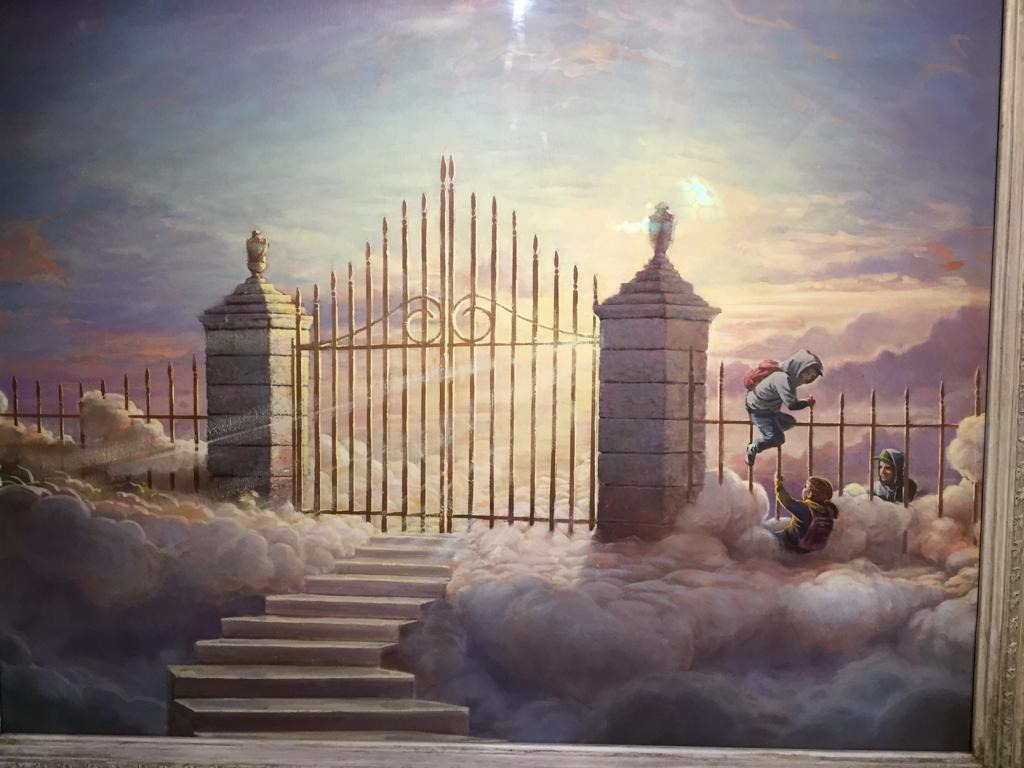 The next one is classic antisemitic imagery. Jews as god killers. An image of a Christ like figure with a red-dot sight on his forehead. 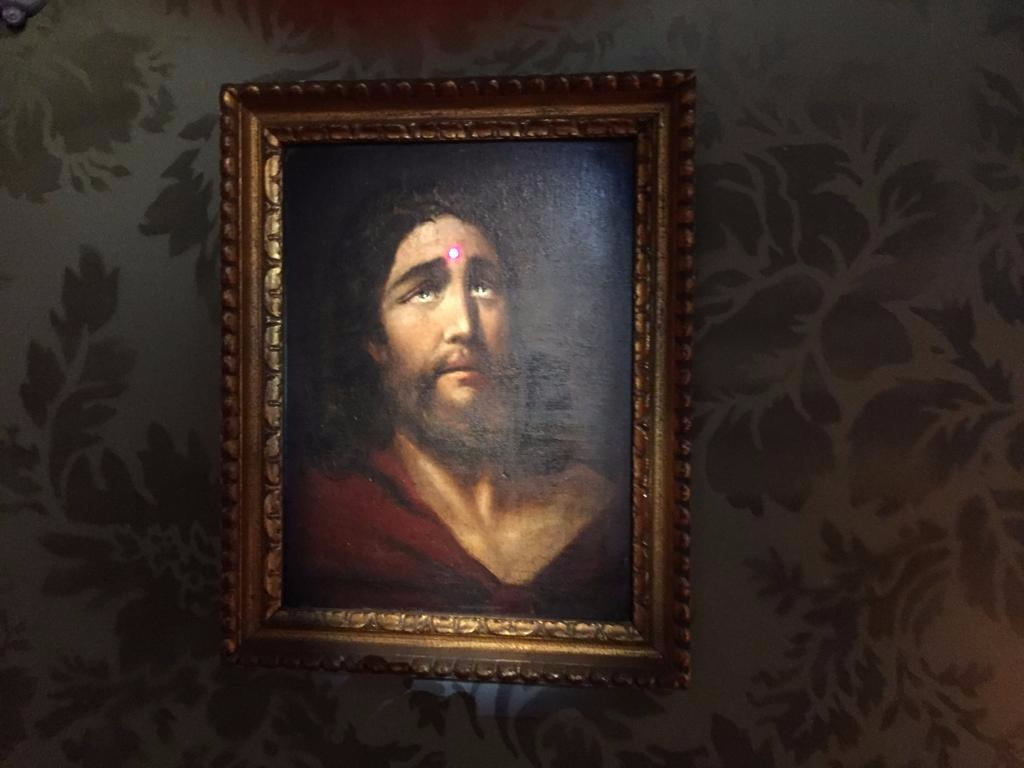 Endless hate in the Banksy hotel

There are many other similar images that will be uploaded by the groups who were there with me, and the IAM is also producing a video on the trip, but these few images provide a clear taste of the vicious propaganda on display. Our itinerary included various different faces of the conflict, but this was an important one. This is part of what we are up against, raw hatred dressed up as art. There is no middle ground to be found when facing such distortion and those who create it have no interest in building a dialogue. They want Jews to be seen as money grabbing god killers who invaded a foreign land and brutalised the inhabitants.

The Banksy hotel is a disgraceful blot on the landscape and full of antisemitic images. And the truth is that there is far more hate that went into building the exhibits within the hotel, than went into building the defensive wall the Hotel was designed to protest. One was designed to save lives, the other only sets out to demonise a people. Rather than join some of those we met who really want to make peace, Banksy chose to run with the hate.

This blog is unique, and the type of investigative journalism that this work requires can be intense. Across the globe there has been a rise in antisemitism that is connected to the delegitimisation campaign against Israel. To fight back, we must do so on both fronts. Because of this, my research involves both antisemitism and the revisionist narrative that demonises Israel. My work is fully independent, and your support makes much of what I do possible. This research can and does make a difference,  I was recently named as one of the J100 (‘top 100 people positively influencing Jewish life’) by The Algemeiner.