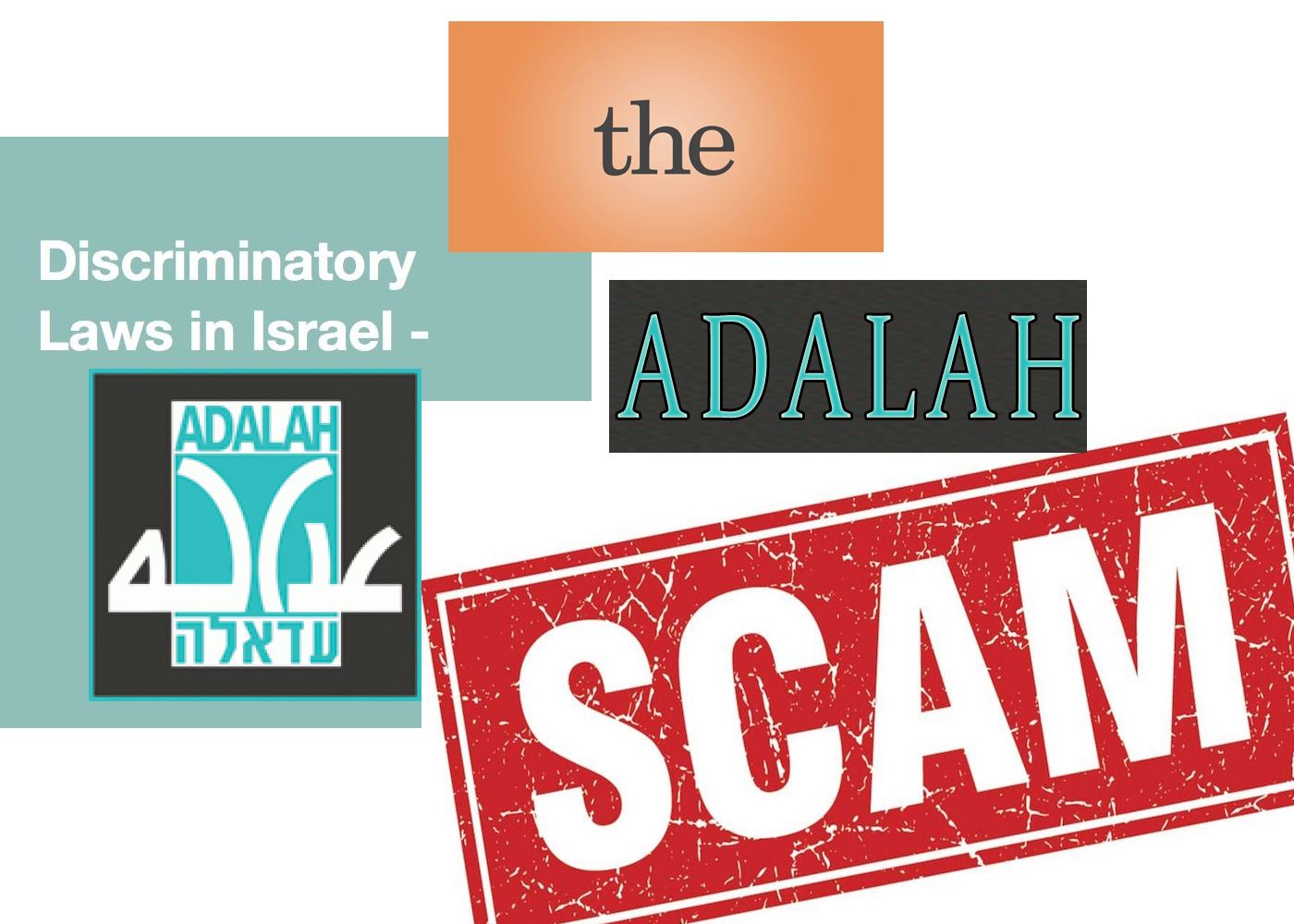 The Adalah scam. The farce of the ‘discriminatory laws database’ 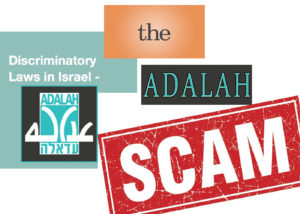 Adalah is a name you may not recognise. They are an Israeli NGO and are responsible for one of the most important ‘scams’ of the delegitimisation campaign against Israel.

Adalah created a database of laws that they claim ‘discriminate’ against the Arab citizens of Israel. There are currently sixty-six laws listed.

Whenever you hear the claim that Israel is a ‘racist state’ or that it is an ‘Apartheid state’, it is the Adalah database that underpins the claim.

So I went through each of the sixty-six ‘discriminatory laws’ and have just published a report on my findings. This is what I discovered:

The first point I want to make is that Adalah’s list has many related to security and the fight against terror. 21% of the laws fell into the ‘security’ category. As the report shows, most western nations have introduced numerous laws over the last decade that have cut back on some civil liberties. Israel has done the same, but these laws do not discriminate. Former cabinet minister Gonen Segev will no doubt feel some of the force of these laws as he stands accused of spying for Iran.

So what does Adalah imply when they suggest a law that deals with interrogations is ‘discriminatory’ against the Arab citizens of Israel? That Arab citizens are all ‘terrorists’? That they are all violent? Isn’t it more likely that almost all Arab citizens of Israel are not impacted at all by these laws and only those extremists that come to the attention of the security services, Jew or Arab, will have their freedoms curtailed?

If anyone suggested that Arab citizens of Israel are ‘enemy aliens’ or are all ‘terrorists’, they would rightly be labelled as racist. That is exactly what Adalah do when they suggest some of these security laws discriminate. The Adalah list is racist.

Adalah’s list is an exercise in cultural and political appropriation

From the outset, Adalah claim that all ‘Arab citizens of Israel’ are ‘Palestinian’ and want to be identified as such.  When a UN report described these people as ‘Arab Israelis’, the Adalah response was swift. They are ‘Palestinians’.

The discriminatory laws list already treats the Arab citizens as if they have no agency and are all terrorists. With this strike, Adalah deny the rights of many Arab citizens of Israel who do not see the situation through the same ideological lens as the Adalah lawyers. Everyone is aware that many Arab citizens identify as Israeli. Why do Adalah deny their voice and falsely speak in their name? Further they disgracefully trample on the identity of those like the Negev Bedouin who are most certainly not ‘Palestinians’. All for their own political purpose.

During this research I divided the laws inside the discriminatory database into categories. Over 50% of them I labelled as ‘absurd’. Thirty-six laws that would leave most right-minded people scratching their heads and wondering just what the problem is. Seriously, some of the laws listed are beyond belief. This was the final breakdown: 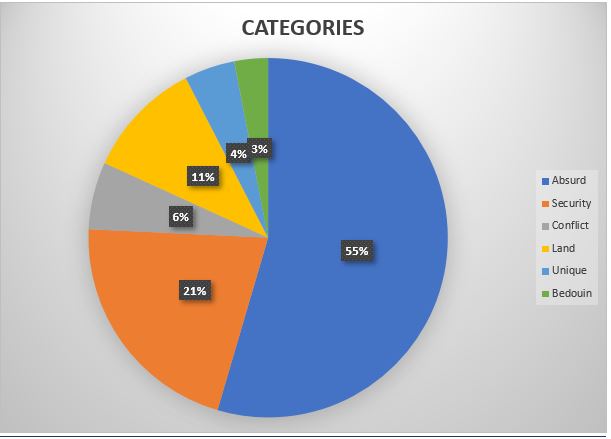 I am not going to go over the total absurdity of the list in this blog. The list is full of nonsense and smoke and mirrors and little else. The full description of each of the categories and a list of all the laws (with comment) is included in the report.

I have published the report to use as a reference and will update it as and when necessary (what is published today is version 1A, it is large and has taken a lot of time to put together, if you see errors or feel I have missed something, please contact me).

As the Adalah database is explicitly or implicitly referenced during almost every anti-Israel discussion, I believe the guide could be a useful one to download or bookmark.

Adalah prove that BDS seeks the destruction of Israel

On the BDS website is a description of the movements aims. This is number two: 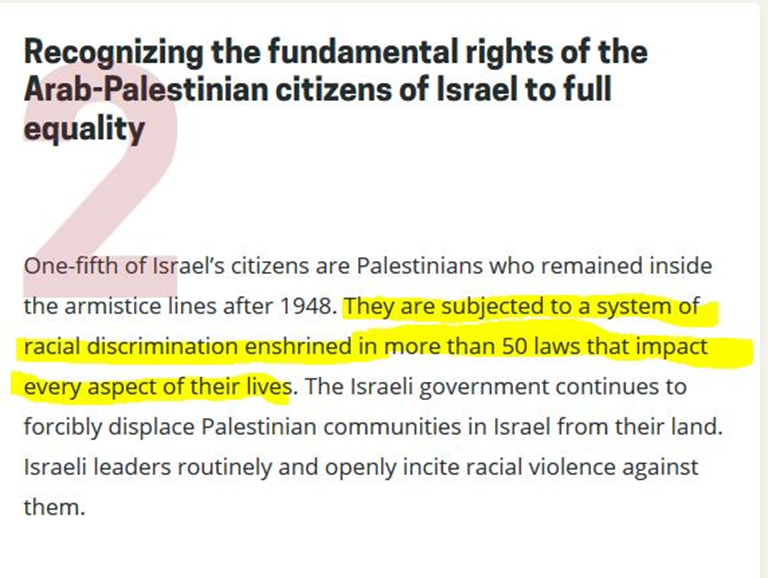 Notice the reference to the ‘more than fifty laws’ in the image. This is a direct tie-in with the Adalah ‘discriminatory laws’ list. It is possible to receive confirmation of this on the BDS website when they reference the ‘more than fifty laws’ and direct the reader back to the Adalah database with a link (see this BNC statement as an example). Thus we can assess what BDS mean by ‘full equality’ by looking at the Adalah database.

The list show that BDS is about the destruction of Israel. It isn’t about equal rights and even goes way beyond removing Jewish symbols such as the one in the flag. The dominance of Hebrew is a problem, Jewish holidays are a problem, the Hebrew calendar is a problem, even the electoral system is a problem. So far are Adalah willing to stretch this, that at one point they even deny that Joseph and Rachel’s Tombs are considered holy sites in Islam and Christianity. All and anything that indicates the will of a Jewish majority is considered a problem. Adalah are not seeking ‘equality’, they are seeking a corrective formula that will give the 20% (Arab Israeli population) the same democratic weight as the 80%.

It isn’t about equality, it is about rejecting the right of the Jews to enjoy the benefit of majority status. It is back to the classic Islamic formula. Jews can be ‘Dhimmi‘, nothing more.

Read the list of laws in the report and ask yourself what BDS *really* wants. Anyone who scans those laws and then suggests BDS is not about the destruction of Israel is either deluding themselves or lying.

Adalah is out to cause trouble

The Adalah list follows an extremist ideological agenda that suggests the vast majority should enjoy no democratic benefit. So to paint Israel as ‘racist’ Adalah will use any tool within reach. It is why they trample over the wishes of some minority groups despite suggesting they are there to defend their rights. Adalah seek ideological benefit from the problems with the Negev Bedouin. It is why they claim the Bedouin are ‘Palestinian’ and seek to describe every decision that goes against them as ‘racist’. They want the situation to remain tense (nobody is denying there is a problem).

House demolitions and compulsory purchase orders are part and parcel of national planning. 238 homes were demolished in the Anfield project alone. Had the neighborhood been in an Arab district in Israel, Adalah would have declared the project racist and there would have been weekly demonstrations against it.

Consider this. Every regeneration plan in an Arab neighborhood, every demolition, every compulsory purchase order, is deemed ‘racist’. The situation is absurd.

Why is Adalah funded?

Adalah cross so many red-lines you would think that European nations would have nothing to do with them. Their list of laws clearly suggests Arabs are all terrorists, they culturally and politically appropriate minority groups, they seek to cause friction as they benefit from a disillusioned population and they seek the destruction of the only liberal democracy in the Middle East.

Adalah should have pariah status.

Except they don’t. They are held aloft as a model NGO and have access to government think tanks throughout the west. They even have ‘consultancy’ status in the United Nations.

This is where Adalah get their funding from (the source and list of references is available inside the report) and how much they receive (in shekels): 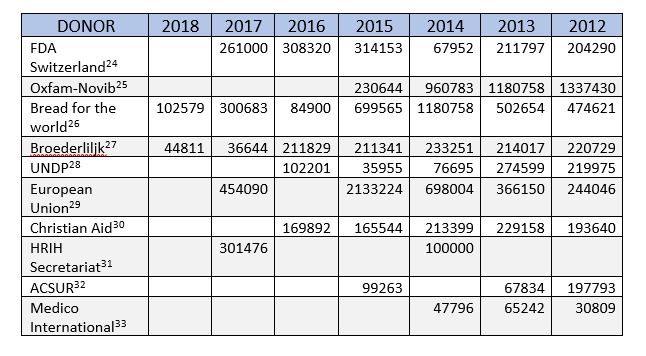 Why are European charities and government agencies funding an NGO that is clearly out to make everything worse for everybody? And why is anyone listening to them?

Those are the questions that really needs to be answered.

The Adalah scam report can be downloaded here.

This blog is unique, and this type of investigative journalism can be intensive and painstaking. Antisemitism is rising and is fueling the delegitimisation campaign against Israel. My work is fully independent, and the support I receive from the community makes much of what I do possible. This research can and does make a difference. My research has appeared in every major newspaper in the UK and many others across the globe.  I have recently be named as one of the ‘top 100 people positively influencing Jewish life’.

If you can, please consider making a donation. Either a single amount or if possible a small monthly contribution.  I will go wherever the hate tries to hide. We need to be there to expose and fight the lies. To shine a light into the shadows and show people what is happening. We cannot remain silent. Every contribution is greatly appreciated.

32 thoughts on “The Adalah scam. The farce of the ‘discriminatory laws database’”