I sat through two events last night on Zoom. One was hard-core anti-Zionist, featuring several of the anti-Israel camps big names. It was all about how antisemitism doesn’t exist. The other was a much more mundane affair, with Yachad hosting Husam Zomlot, the ‘Palestinian Ambassador’ to the UK. I came away feeling depressed. The level of discussion was so weak. If this is the best that both camps can do, then they are extremely lucky that some people can be so easily fooled.

The defeated conspiracy theorists on Zoom

The first event was hosted by the anti-Zionist Miko Peled. Peled should need little introduction to readers of this blog. Having been to several of his events, and read much of what he has written, I think the time I called him a deflated, lying buffoon sums him up best. 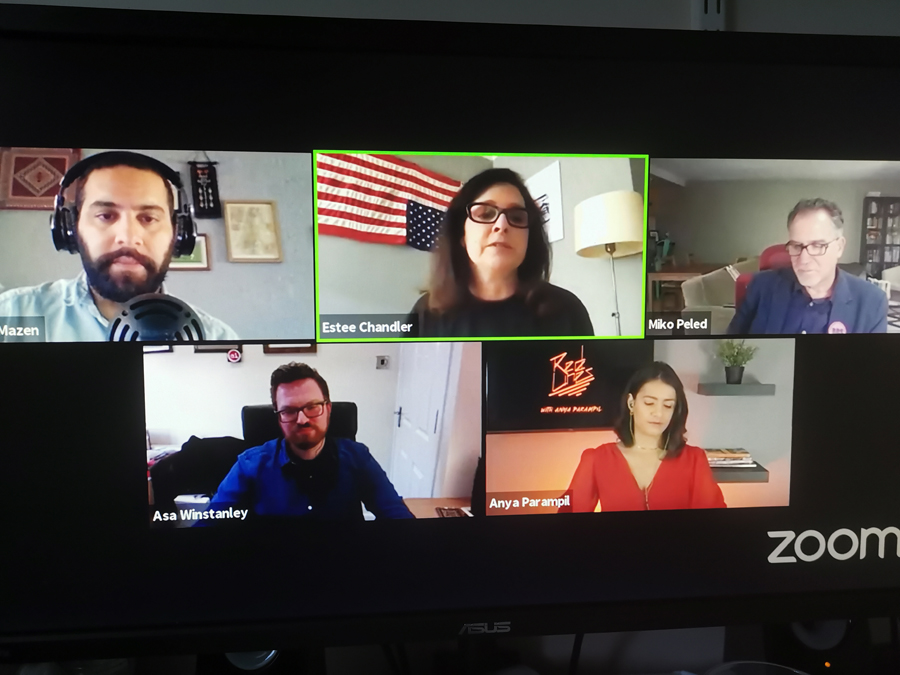 The others on the panel were

During the Q&A, a fifth face appeared, Jamil Mazen to pick out which questions to put to the table.

The event was titled ‘From Corbyn to Sanders‘, looking at whether ‘Zionists’ are targeting ‘progressive politicians’. To be honest, these speakers came across as defeated and dejected. The conversation was dull and each of the speakers in turn played their part. Miko Peled was the buffoon. Chandlers role was to keep quiet and simply nod in agreement when everyone else was talking. When Parampil was on she kept talking for ages, throwing in keywords without making a point. And poor Winstanley could not string two coherent sentences together. ‘Our Asa’ was beyond awful.

Lost they certainly have, and it showed. The thing is, because they are so convinced they are right, the more they get beaten, the more insidious and hidden they believe the enemy they face. The entire conversation was a conspiracy theory. These four used the word ‘they’ to describe the invisible forces against them at least 100 times. Each of these people seem to believe in a Zionist monster that probably even reads their private emails. They are so lost in conspiratorial nonsense, not a single concrete argument was made. I couldn’t help myself, in the end I even felt sorry for them (kidding).

The next event was a Yachad Zoom event. Hannah Weisfeld gave the platform to the Palestinian ‘Ambassador’, Husam Zomlot. And she really did give him the platform.

Like most fringe groups Yachad need attention to make headway. This event was another Yachad winner. They put on an event with someone they know will raise opposition. The majority make a noise, Yachad get their name in print.

Weisfeld gave Zomlot all the time he needed on Zoom to push his propaganda stories. Not once was he properly challenged. At one point he even compared the divisions on the Palestinian street, which sees clans and factions brutally slaughtering each other, with the polite disagreements normally found between groups in healthy democracies. Weisfeld just sat there and let her viewers absorb the nonsense.

In the list of questions being posed were several ones that would really challenge the propaganda. Weisfeld ignored them, instead picking only those that would allow Zomlot to spout even more nonsense.

I have seen Mark Regev, the Israeli ambassador in action many times. He sits in front of hostile audiences and will take any question given to him. Sometimes I think he prefers the challenging ones because it means he is answering the questions he has to. This was different. Why wouldn’t Weisfeld put some of the more obvious questions to Zomlot? Instead the event came across like it was choreographed.

It was just awful. This is the type of stuff that brainwashes students who don’t know better. Zomlot just sits there and tells you everything you want to hear. The only trouble is that very little of it is true and he can’t even deliver on the bits that are true. This is empty, stupid, left wing propaganda. I don’t care that Yachad had him on – I care that they promoted his fairytale.

Another bit of news reached me yesterday. Last years I was at an event outside Kings that turned violent. I was personally attacked when someone tried to forcibly take my camera. Other pro-Israelis were also attacked at the event. One had their Israeli flag grabbed and torn. The person who did the grabbing was apparently Yasmin El Souda.

El Souda has just been voted in as one of the co-Presidents for SOAS Student Union. She is co-President of Welfare and Campaigns. She was supported in her campaign by Heba Hayek who was also at the KCL event. Hayek was the one frequently shouting through the megaphone. On her own FB page Hayek has images of the terrorist Leila Khaled, posing with a gun.

Hayek also has a Twitter account and she thinks it is shameful that Hamas STOPS people firing rockets on Israeli civilians and punishes those that do?

Her Twitter feed is full of awful tweets. In this one Hayek retweets instructions to support the resistance and hold back information from the public about the firing of rockets:

These posts are public, and yet Hayek still received offers from both SOAS and Oxford. And others scratch their heads about why the UK environment is becoming too toxic for the Jews. How all this is possible, I do not know, but it explains the sorry state of our university campuses. The sooner SOAS sinks completely the better for all of UK society.

From the beginning of June I will be publishing new material, both for students and activists. I am tired of seeing either inaccurate or ineffectual material being used to explain the Israeli case online. The subject is not difficult and far too often, pro-Israelis get dragged into rabbit hole discussions that they will never win. The language and messaging is often all wrong and some of the material provided for them to use is even self-harming.

I think we need to be better armed and not everyone can read through 100s of articles trying to find the truth. From the basic historical arguments to the modern campus discussions over BDS, I will be publishing new and easy to use material on a regular basis.

I am going to be using Patreon to support this. If you want to support this venture by donating just a few £/$ a month, please head to the Patreon site. I will also begin uploading unique material on the Patreon page on a monthly basis as a reward for those supporting me. If you are supporting me through regular or monthly donations via PayPal, I will give you access as well. Believe me, I see some of the arguments being put forward by our friends online. We need this project.

35 thoughts on “An evening with Zoom. Delusion, propaganda and defeat.”