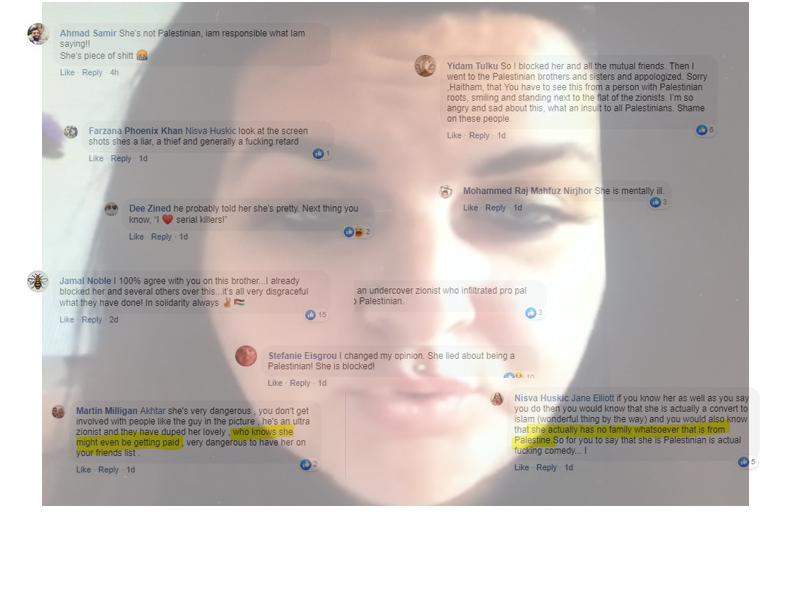 Zina the hounded- the hatred that never wants to talk

Last week I told the story of Zina who made the mistake of talking to a Zionist. This is an update of what followed. It is important to stress that this blog and the video I am publishing have been produced without Zina’s co-operation in any way. She remains an anti-Zionist and an adversary. Given some of the abuse she has received, there is little doubt this blog will be taken as further sign of her being little more than a ‘Zionist infiltrator’. Nothing could be further from the truth. What she is however, is evidence of how closed minded, extreme and brutal the anti-Zionist movement is and how swiftly it rounds on anyone who thinks or acts differently.

Zina Abdullatif is a hard-core anti-Israel activist. Zina went to the Al Quds March in London. So did Joseph Cohen from the Israel advocacy movement. After the event, circumstances brought them together and they engaged in a dialogue. Each side, the Palestinian activist and the Zionist held their political ground. The meeting was respectful and after the event, they uploaded an image of themselves standing together holding their respective flags. Whilst Joseph was praised for his actions and even Zina received warm comments on Joseph’s page, the same was not true the other way around. Zina was instantly attacked and hounded by her fellow activists. The abuse was incessant.

After the Zina blog

The situation didn’t settle down. Zina had partially caved, but despite her apologies and calls for ‘peace’ amongst her friends, Zina was continuously hounded. Eventually she turned to the police for help:

She also uploaded a video to Facebook in which she spoke of ‘unfair’ ‘horrible’ and attacks.

Because of the notifications and messages she was receiving, only Zina can have any idea of how bad the situation became. But even then, because Facebook doesn’t notify you when unfriended or blocked, her own understanding is still not the full picture. Zina was now a contaminated figure and there was a full scale *international* campaign to get people to block her:

Haitham is a ‘freelance Palestinian photographer and documentary film-maker’. Think long and hard about that fact and consider the implications. Haitham was picked-up in my previous research into propaganda that comes from PA areas. The IHRC recently described Haitham as a ‘photo-journalist’, even holding an exhibition in his honour. Those who describe these ‘activist propagandists’ as ‘journalists’ should remember that they organise campaigns to block anyone who does not toe the line.

Some who tried to defend her also became pariahs.

But she isn’t anymore:

Group Founder Elleanne Green must have removed her shortly after she unfriended / blocked Zina for her ‘mistake’. But it went much further than the close-minded reflex of Green.

Hate from the Maldives

The hate Zina has received is global. One of the key actors is a woman called Rina Idrus. Poor Rina is somewhat challenged. She believes there are only three ways I could have got the screenshot from Zina’s page. 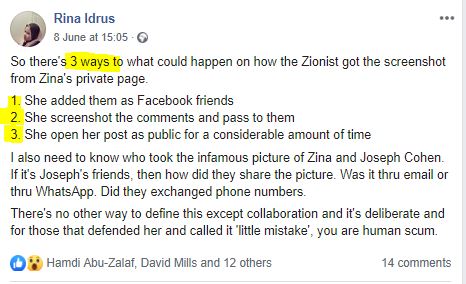 Originally from Malaysia, Rina has been living in the Maldives for eleven years.  As a point worth remembering, every citizen is a Muslim and the Maldives have laws that state you can only get citizenship if you are Muslim. Practicing ANY other religion is illegal:

I did search Rina’s public profile, looking for a post displaying outrage for the fact that in her own country no other religion but Islam is allowed to be publicly displayed – but I found none. It seems for Rina the only thing that matters is her obsession with the one Jewish state in the world.

Zina even had her Muslim identity questioned. This is Deb Turner, attacking the identity of Zina, whose father was born in Jerusalem:

It is important to understand the driving factor here. In this comment, Deb posted inside the group ‘Truthers against Zionist lobbies‘, Deb tells everyone what she thinks of the EU:

Others from the mob simply denied that any of her family were from the region at all:

Here is an interesting one. This is a thread about ostracising a woman just because she spoke to a British Zionist. It is a thread full of vicious anti-Jewish racism and bitter attacks on Zina. Gary Spedding, who paints himself as a moderate also posted on the thread. Did he tell people not to over-react? What about challenging anyone over the anti-Jewish racism? Did he protect the victim? No, he simply identified Joseph for the lynch mob. These pretend moderates quickly revert to type when the environment permits:

Just because she spoke to a Zionist, Zina was instantly turned into an infiltrator, in the pay of Israel:

Martin Milligan, who made the comment above, is another who has already been identified in my research. A key activist in Scotland, he was featured in my report in the Scottish Palestine Solidarity Campaign (SPSC). This is why:

Scottish anti-Israel activism is full of antisemites. Here is another favourite for the SPSC having a go:

‘AlJakhbeer Jola’ is the latest incarnation of Jolanta Hadzic. Hadzic has had many personas, the most recent plays someone who is ‘Jewish’. This is one of Hazdic’s earlier posts – blatant Holocaust Denial: 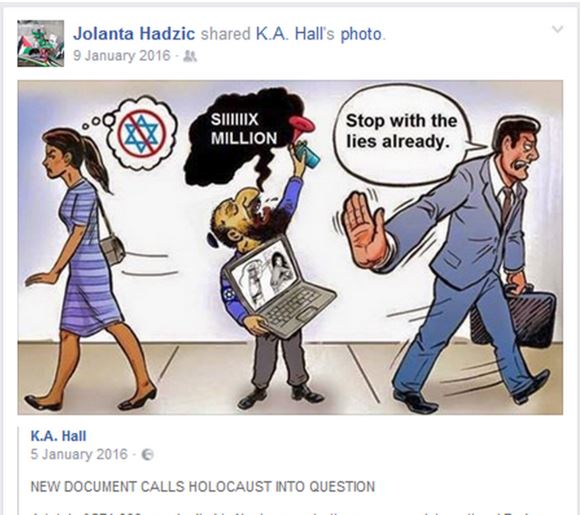 The truth is that Zina is only relevant or useful to these people for as long as she acts as a shield for their antisemitism. This is a global movement of hate that has no interest in Zina, or anyone else, engaging in dialogue. A soon as Zina stepped outside, she became a demon and untouchable. The one who claims ‘Palestinian heritage’ cast aside by antisemitic thugs around the world. They simply had no further use for her.

I can’t help Zina, nor would she want me to. Zina is trapped. She was fed lies and had her ideology shaped by the very movement of ‘Palestinianism’ that would eventually discard her.

Zina uploaded a video to Facebook, some of which I have included in the video that explains the story:

‘Palestinianism’ isn’t about Palestinians, it is about Jews and Israel. Zina is just an example of a far bigger problem. One that holds people captive, trapped in a conflict and with no permission to escape. Palestinianism has even held millions of people in refugee camps for three generations. If the power of the mob is enough to cower and silence an activist in London, just imagine how much more powerful that becomes in areas where groups like Hamas or Hezbollah rule the streets. What chance is there for peace, if even talking to a Zionist in London results in exile?

This blog is unique and I engage in deep undercover research. I expose antisemitism and address the false narrative spread from anti-Israel activism. The work is fully independent and many key stories on antisemitism have first been exposed by this research on this site. I was recently named as one of the J100 (‘top 100 people positively influencing Jewish life’) by The Algemeiner. If you can, please consider making a donation.

OR, I have also opened a Patreon page. This is another way to donate a small amount monthly to support my work. Every contribution is both needed and truly appreciated.