Another day, another battle. I do little more than fight antisemitism and false history and yet in the last six months I have had two attempts to silence me. The first was a denial of service attack on my website. Given the content of the threats that preceded the actual attack, there was little doubt that it was an antisemitic pro-Corbyn activist. Yesterday was different, yesterday it was the turn of mega-giant YouTube.

On Wednesday evening I received this simple email from YouTube: 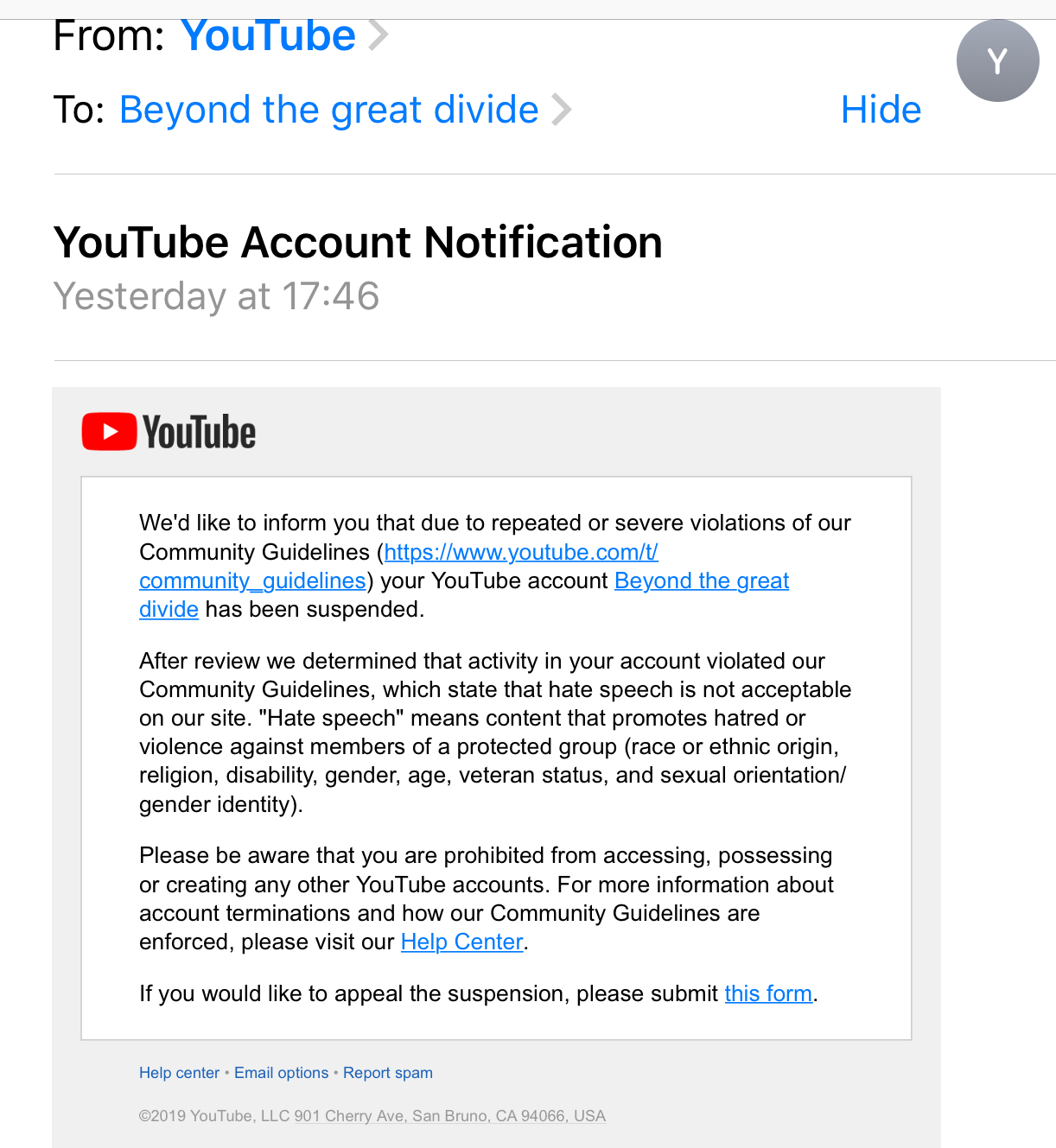 Apparently, my channel had ‘severe’ or ‘repeated’ violations of YouTube’s community guidelines. The email went on to tell me I was prohibited from setting up another account to replace it. Effectively YouTube accused me of ‘hate speech’. They did give me the option to appeal, so I did. I was presented with a simple form, which allowed me 900 characters to protest my innocence. I clicked submit and waited.

After a quick check I realised YouTube have recently changed their guidelines and were cracking down on extremist sites. All well and good, but a history book about Hitler isn’t the same as a neo-Nazi book, even if material from one is contained as examples in the other. On Thursday I still hadn’t heard anything, so I publicly tweeted about the banning. Within minutes both Stephen Pollard, Editor of the JC and Marc Gardner, Comms Director at CST attacked YouTube for the action: 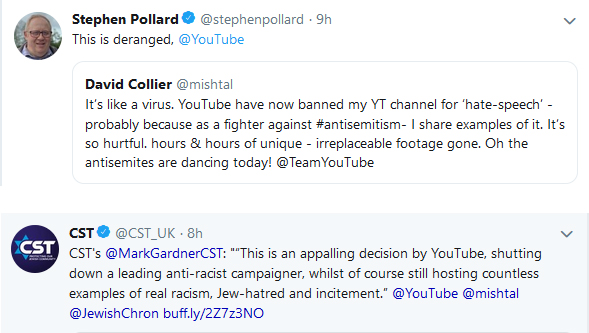 The JC ran an article, contacted YouTube and shortly afterwards I received an email telling me the account was restored. I can only assume the sudden interest sped up the appeal process. YouTube even apologised for deleting my account ‘in error’. (*Until now I have mainly used it as a platform to upload videos just to support the blog. This is about to change. Please consider subscribing to the channel as I will be giving it a major facelift*).

In any event – account restored and another annoying and time-consuming saga over.

When the account was restored – one of my videos was flagged and removed. It was footage I had taken when I went to see David Icke’s show in Watford: 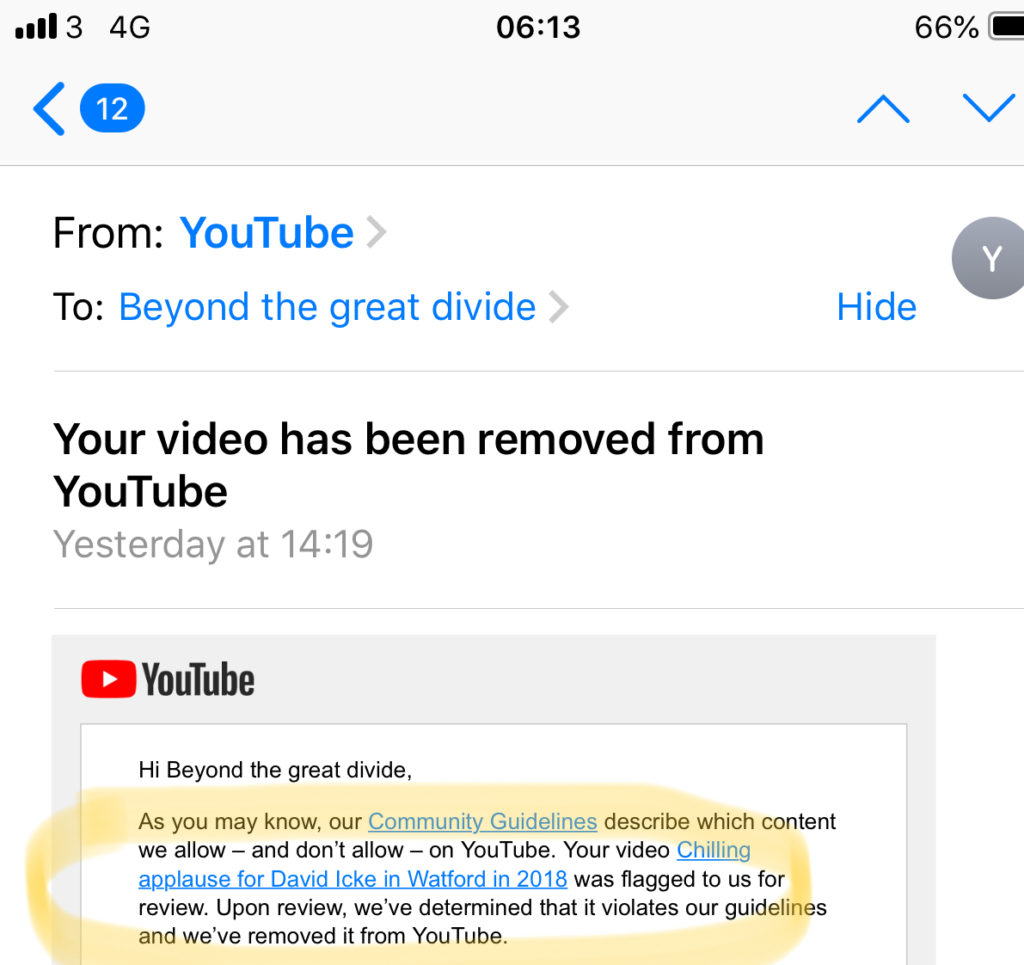 The video highlighted the applause that Icke had received at the conclusion of his Watford talk. I found it ‘chilling’. It is fascinating that this video needed removing, as Icke’s entire channel, containing hundreds of his videos is still up on YouTube:

For those who think David Icke is tame, they can always subscribe to David Duke’s channel.

But Holocaust denial is okay

In it’s statement, YouTube said that it was banning Holocaust denial. Yet a simple search for ‘H-o-l-o-h-o-a-x’, the most basic way to find such material, still returns material. Here is David Irving, ‘debunking the Holocaust in 3 minutes‘. Elsewhere, you can learn about how ‘wonderful’ the treatment of the camp inmates was in this Holocaust denial video. The channel behind it has been freely peddling hate on the platform for four years.

Speeches by Jew-hating Holocaust denier Eustace Mullins are widely available, but if his American accent puts you off and you seek a more authentic Nazi accent, there is always Ernst Zundel. You can even watch him giving a ‘stark warning‘ to Jewish people. The channel that uploaded the Zundel video appears to have spreading anti-Jewish hate on YouTube for over six years.

There is little point linking to hundreds of such videos that I quickly found, and this isn’t even the tip of the iceberg. Brother Nathaneal isn’t a hate-preacher? He is okay – but I am not? And Rothschild Conspiracy? The very pillars of Rothschild Conspiracy rewrite history in order to place the blame for WW1 & WW2 at the feet of the Jewish people. What is that, if not an attempt to cleanse the Nazis, turning the Germans into innocent people that the evil Jews provoked. There are 1000s if not 10000s of such videos on the platform.

I went back to my 2018 Palestine Live report, which listed dozens of hard-core videos spreading hate, to see how many have been removed. Sadly, far too many of these videos are still live, years after they were originally uploaded.

Generally speaking, those trying to avoid capture, frequently change names and locations in order to continue doing whatever they are doing for as long as they can. That does not seem necessary on YouTube. There are channels who have been openly peddling hate for a decade. YouTube may talk about fighting Holocaust denial and Jew-hatred but it still seems as if only antisemitism campaigners and historians really have to be concerned by the new crackdown.

This blog is unique and I engage in deep undercover research. I expose antisemitism and address the false narrative spread from anti-Israel activism. The work is fully independent and many key stories on antisemitism have first been exposed by this research on this site. I was recently named as one of the J100 (‘top 100 people positively influencing Jewish life’) by The Algemeiner. All you really need to know is this – the other side are scared of my work. If you can, please consider making a donation.

128 thoughts on “The day YouTube banned (and restored) my channel”