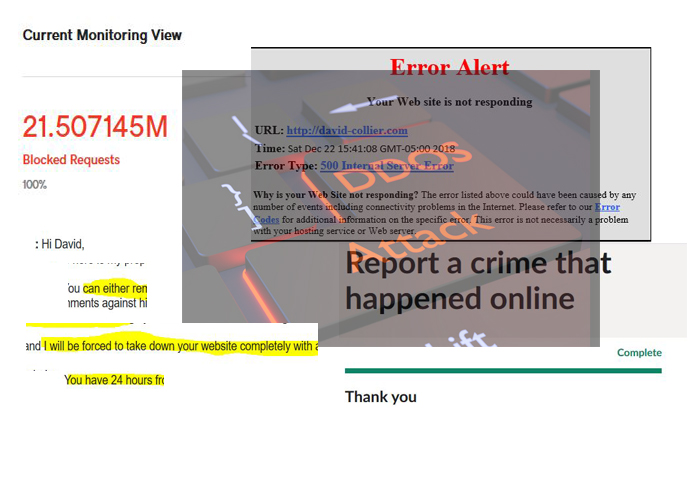 Last night, my website fell victim to targeted cyber-crime. It was offline for several hours due to a DDos attack, which is a malicious attempt to disrupt normal traffic by overwhelming a website with a flood of requests.

There was a warning. I was given twenty-four hours to comply with a simple set of demands, or, as my attacker threatened, he would be ‘forced’ to take my website down. The demands were simple, I just had to remove everything on this website that is critical of Jeremy Corbyn.

My blog is a website that some people do not want online. For several years I have been fighting back against rising antisemitism. My work is diligently researched and carefully argued. I have produced forensic reports that are 100s of pages long and contain mountains of evidence. My writing is balanced, moderate and logical.

I am a key target for one simple reason. I am not what they want me to be. They call me a racist, an extremist and a misogynist. They describe me as someone who disrupts events, seeks to shut down debate and deny platforms. I am labelled a homophobe, an Islamophobe, an anti-Palestinian and most recently, even a paedophile:

Not a single one of the smears is even partially true and if any of these smears had weight, Corbyn’s activists would simply dismiss me. It is because I am none of those things, because I am so effective, that they view me as dangerous. Devoid of arguments against me and unable to counter the evidence, they resort to illegal attacks. These people are antisemitic fascists.

The warning came at 16:05 on Friday evening, twenty-five minutes after the Jewish Sabbath began.

The threat is clear and to the point. These people support Jeremy Corbyn, believe I am making up the antisemitism issue and think that I must be silenced. The only question that remained over the threat – was whether or not it was real.

It appears the attack itself began just after 19:43 on Saturday. That is when I received another message from the same IP address. It contained no content but the letter ‘a’, so I can only assume it is a timestamp of when the attack began:

The first I became aware of the website attack was when I received a ‘site down’ message from an online third-party monitoring client:

And sure enough, when I checked, I received an error notification:

I had friends check the website status and they confirmed it was down. A blog written by a British Jew that fights back against antisemitism, had become a victim of a cyber attack that had successfully taken it offline. Why? Because the website highlights antisemitism and suggests that Jeremy Corbyn is a danger to British Jews (and by extension, everybody else too).

The evidence and fixing it

I spent several hours last night with the website host, trying to defend against the attack. The website required a security upgrade and I am purchasing additional software to protect the site. I normally leave a note at the bottom of each blog asking people to consider making a donation, but in this instance, I feel justified to mention it here. This research (and presenting it) is a full-time role and it can be expensive. There are also unpleasant unforeseen costs. Please consider supporting this work by donating via PayPal or through a new Patreon site I have just set up for this purpose.

The site was restored, but it remains unstable as I write. They are currently configuring the firewall so access has been inconsistent today. When it went back online the first time, I saw that it had been hit with millions of server requests. By professional standards it does not seem to have been massive or prolonged, but I am not a bank. Why on earth would a blogger need to add higher levels of protection? Why? Because I am Jewish and Corbyn’s Labour Party has a clear problem with Jews. Welcome to Corbyn’s Britain:

I cannot repeat this warning often enough. Jeremy Corbyn does not present any real opportunity for positive social change. Like most dangerous ideologies, Corbyn’s is wrapped up in pretty keywords and empty promises. Jeremy Corbyn, those around him and his hard-core support base are a menace and a threat. Look at what has just happened to me. I am ‘free press’ and this attack is what it looks like under Corbyn’s Britain.

I am just a British Jew who refuses to lie down and accept that an institutionally antisemitic party can take control of the British Parliament. Because of my efforts, I have just experienced an illegal cyber-attack, carried out in the name of Jeremy Corbyn. These people are not ‘of the left’ in the sense we understand it. They come from a place where hard-right and hard-left sit shoulder to shoulder. They do not believe in free speech, they do not accept the law and for them, the cause itself sits above all other priorities. This includes all of our freedoms. Beware the red-fascism, because I have seen it and today it waves in the name of Jeremy Corbyn.

This blog is unique and I have been engaged in undercover research into antisemitism and the revisionist narrative for several years. The work is fully independent and in the last few years, many key stories on antisemitism have been uncovered on this site. I was recently named as one of the J100 (‘top 100 people positively influencing Jewish life’) by The Algemeiner.

PayPal donations can be made using the donate button above. Or I have just opened a Patreon page. The Patreon page is new and donating just a few pounds a month would be a great way to help me kick-start it.