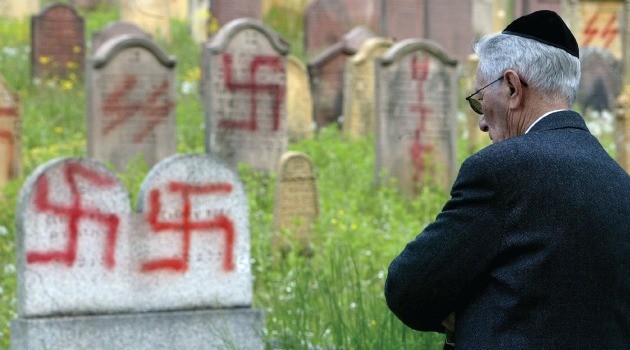 Under cover of darkness – the Jewish anti-Semite 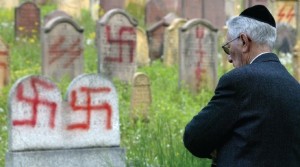 Shortly after the start of the 2nd intifada, when Ariel Sharon’s footsteps on Temple Mount were being blamed for every other Palestinian home conveniently possessing an illegal weapon, my love affair with online forums began in earnest. It was an interesting time, and experience soon taught me the difference between those that ‘know’ and those that ‘think’.

Despite the anonymity that forums provide, online sentiments were still far more guarded then than they are now (although it didn’t seem that way at the time), and if you truly felt the need to face a barrage of blatant anti-Semitism, then outlets such as Stormfront or Icke were the place to be. I remember spending months reading posts about the scientific ‘proof’ that Auschwitz didn’t contain gas chambers. I think the most absurd argument I was ever involved in, was with a proud ‘denier’ regarding the death count from the Warsaw Ghetto; these people are fanatics to the extreme and there is no limit to the conspiracies they wish to create. Those discussions are not for the faint hearted.

However absurd it might sound, there is a comfort in the familiarity of arguing against the easily identifiable form of classic anti-Semitism; these people after all, wear their hatred like a badge. The poison they carry is clearly labelled, and unlike other sources and forms of anti-Semitism, it is neither dressed up nor marketed as treacle syrup. There is also near universal condemnation, and if a Jew stands up to a modern day Nazi, he is likely to find a fair number of different groups on his side. Fascism is the comfort zone of the argument on anti-Semitism; but what then of anti-Semitism outside of the comfort zone, anti-Semitism disguised as something it is not, anti-Semitism being sold as treacle syrup?

Having set up camp in opposition to the University of Southampton’s support of Oren Ben Dor’s proposed conference earlier this year, I developed a solid fascination with the writings of those like Ben Dor; people in the UK, who were born in Israel and who for whatever reason adamantly oppose all things Zionist. Whilst I was always aware of them, it is over the last few months that I have become far more acquainted with their positions, and people such as Atzmon, Pappe & Ben Dor have hardly a piece published on Israel, Jews or Zionism that I have not recently read. Along with Jewish non-Israelis like Blumenthal, their written output is craved by and disseminated on every anti -Zionist and anti-Semitic outlet on the web; Pro-Palestinian sites use them to fight the pro-Israeli message, whilst anti-Semitic sites market them as Jewish whistle blowers exposing the global Jewish conspiracy.

It was during a look at updates on Gilad Atzmon’s site last week, that I noticed he had cross posted a blog piece from the Evening Standard’s property correspondent Mira Bar-Hillel. Unlike every other property correspondent that I have come across, Bar-Hillel seems to consider herself an expert on Israel and anti-Semitism. Her writings on these subjects have appeared in numerous newspapers and during the Israel/Gaza conflict last year, she was called in as an ‘expert’ on Sky News. This fascination foreign media have with writers posessing Israeli passports, who are highly critical of Israel is telling; to be a writer on the Middle East for a European media outlet takes deep experience, vast knowledge and an intuitive understanding of the political quicksand of the region; unless of course you take a distinctly anti-Israeli stance and possess an Israeli passport; because with the combination of those two keys, almost every door immediately unlocks regardless of your professional expertise on the subject matter. This of course is not the fault of a few attention seeking hatemongers, but rather the media that seeks them out.

It is unlikely to be a coincidence that for some of the more prominent anti-Zionist Jews, they have been more successful as an anti-Zionist than in their main field of professional interest. It is also highly unlikely they have failed to notice a correlation between the amount of publicity they receive and the vitriol in the piece on Israel or Jews they have written; where would Blumenthal be today for example, without an anti-Zionist stance? Lucky for him then he has the skill of hating Israel to fall back on; good career move Max.

However, Mira Bar-Hillel is distinctly different from Ben Dor, Atzmon and Blumenthal in that she both displayed Zionist positions (albeit from the political left) and has called out anti-Semites in the past. The type of comment we had seen from Bar-Hillel prior to 2012 that suggests Israel was ‘once a good place’, or Oslo resembled ‘a peace process’, is completely alien to true anti-Zionists. In 2009 Bar-Hillel even penned a piece that complimented Israel’s judicial process and her first 12 months on Twitter were ‘Israel quiet’. It isn’t until 2012 that Bar-Hillel visibly begins to blur the lines that separate a peacenik who wants what is best for Israel, with someone who wishes it harm. Her use of the word ‘pogrom’ to describe a racist attack on migrants in Tel Aviv, a clear reference to the bloody massacres of Jews in Eastern Europe, is a deliberate and disgraceful slur on Israel and an insult to the memories of those massacred in the earth tremors that were signals of an oncoming storm.

Since then, Bar-Hillel has engaged on a long winded ‘coming-out’ party, continually turning up the volume to provoke more response. There is a 2012 Haaretz comment, credited to her (I am not positive of the authenticity) in which she openly declares a prejudice against Jews. In 2013 she began penning articles about Israel that appeared in papers like the independent, full of the usual distortions and mistakes (you can see Elder take one of those apart here).  My question to the Independent would be, what did Bar-Hillel have that made her a suitable correspondent on Israeli matters? This is evidence of the key combination at work, willingness to demonize Israel + Israeli passport = British journalism opportunities.

UK Media watch also did a piece in 2013 on another Independent article by Bar-Hillel, with a focus separate from any left-wing sentiments over Israel; this second front is solely about anti-Semitism. There was another piece on anti-Semitism in the same paper which against distorted the plain facts and a pattern was set; Mira Bar-Hillel could be relied on to put up an Israeli/Jewish opposition to British Jewish claims over anti-Semitism.

2014 saw the Israel / Hamas conflict and was to bring Mira Bar-Hillel ample opportunity to attack on both fronts. She declared she wanted to burn her Israeli passport, using Nazi-Israeli analogies as she drove home her point about how a democratically elected Israeli politician is in fact an ‘angel of death’. She began accusing British Jews of complicity in the ‘bombing of women and children’ and an interview in the BBC suggested British Jews are ‘scared’ of voicing their true opinions. It was on Twitter though that Bar-Hillel outdid herself in a discussion over the Protocols of Zion. During that exchange, Bar-Hillel suggests that whilst Protocols were a ‘crude forgery’, Jewish lobbyists appear to be picking up the strategies from a book about global Jewish domination and using them. Does this mean Bar-Hillel now believes the book was a forgery but the message is real?

The attacks on the British Jewish community were relentless. A further piece on Jewish British lobbies and the sinister ‘guiding hand’; a piece on how critics of Israel rather than British Jews need protection and an incredible interview on Sky News in which she crosses too many boundaries to count, and that UK Media Watch takes apart in a blog so easily.

Bar-Hillel openly admits she is now frequently called an ‘anti-Semite’ and a ‘self-hater’ and whilst I have come across her and her never-ending squabbles on Twitter before, this latest blog on Atzmon’s site is probably the most disgraceful thing she has ever written. I have no idea whether Bar-Hillel is an anti-Semite or not, but this piece is an anti-Semitic diatribe that carries some of the most disgusting undertones I have seen penned by anyone in recent years.

Bar-Hillel, who doesn’t seem to differentiate fact from fiction, and never seems to let truth stand in the way of what she is trying to say, claims that the rise in anti-Semitism is a ‘myth’. Her first point after mentioning the existence of a sinister ‘Jewish Lobby’ was to suggest nobody had ever asked the Met Police for the anti-Semitism figures (implying others just made them up), despite numerous other news outlets and bloggers referencing these statistics long before Bar-Hillel ever got hold of them. Bar-Hillel then embarks on the most ridiculous error ridden mathematical exercise in an attempt to prove British Jews are in fact, not in any danger. And she so messes up basic statistics, she ends up ‘proving’ it is safer to be a Jew in London than anyone else, eventually even calling their position ‘lucky’. Can you imagine anyone ever trying to conduct an exercise such as this on any other victim group? Beyond the primary lesson that nobody who fails to thoroughly grasp statistics should ever voluntarily choose to embarrass themselves this way, it is the underlying message of the piece that is the most disgusting.

I have *never* seen any victim group be told they are mythmaking and have their suffering belittled. I am a non practising Jew and had my car badly keyed last year ( BTW Mira- like many ‘maybe-maybe not’ crimes, this was unreported). Mine is an example that anti-Semitism, like all hate crimes, goes under-reported as many victims either fail to report the event or cannot be sure of the motive. Implying CST exaggerates the figures because they would not exist without anti-Semitism is *exactly the same* as someone outrageously suggesting the Rape Crisis Centre also inflate figures to protect its own survival or has a conflict of interest in the statistics on rape. Perhaps the British Heart Foundation secretly hopes no cure to heart disease will ever be  found. Bar-Hillel is attacking a group set up to represent Jewish victims. She is forging an argument that can be used against any organisation set up to aid victims and applying it only to the one that deals with anti-Jewish hate crimes. That Bar-Hillel can make these statements and sail through as if nothing has occurred, shows how easy it has become to attack Jews and how disinterested the general population. If someone made a similar comment about anti-racism groups or battered women centres, they’d be ostracised within the day.  When I first started writing, views like these were hidden in darkness on the fascist forums, now they are published openly. Jews are treated like they are ‘fair game’ and whatever Mira Bar-Hillel is or is not, what she writes would easily feel at home on Nazi sites like Stormfront, where they would be warmly welcomed amongst those desperate for their daily feed of hate.

3 thoughts on “Under cover of darkness – the Jewish anti-Semite”