Toxic. One thing I have firmly understood in my time researching and exposing antisemitism is that haters never stop hating. The dangers posed to Jewish people and society as a whole, may evolve, mutate and even dress up as the benign, but they never go away.

I tend to focus on more intensive research, as I find it more effective to present a larger, well referenced expose than make small individual punches. Detailed reports such as those into Palestine Live, Amnesty International, the Labour Party, the lies of the NGOs, the Palestine Solidarity Campaign, school textbooks or false historians stand the test of time and reach the desk of the people that matter in a way that throwaway headlines rarely do.

This does mean there are sometimes relatively quiet periods on this blog. I am currently putting together two large reports and the lack of updates on this website is due to my involvement in these bigger projects. But I never stop watching what the haters are doing and events over the last few days have distracted me somewhat. This is a brief look at some of what is going on.

The sickness of the PSC

This week exposed the weakness and failure of the anti-Israel movements more than most. The deal between the UAE and Israel is a historic one. Whilst the lies of the PSC may persuade a foolish pensioner in Newcastle to stop buying Israeli avocados, the Arab boycott itself is crumbling. So it was no surprise that the latest online event put on by the Palestine Solidarity Campaign was a depressing affair.

The online ‘demonstration’ was hosted by Director Ben Jamal and lasted 90 minutes. Yes, of course Jeremy Corbyn was a keynote speaker. Two other MPs made an appearance, along with a couple of trade unionists. As PSC events go, it was relatively tame. They had a few political propagandists speak from Gaza and coincidentally, there was no problem with Gaza’s electricity supply when they did so.  There were the usual smears but nothing too outlandish. The only surprising thing was that the ageing crowd did not fall asleep.

One of the hardest parts of my research is putting names to faces, so for me an online Zoom event like this which does the work for me, is like receiving an early Chanukah present: 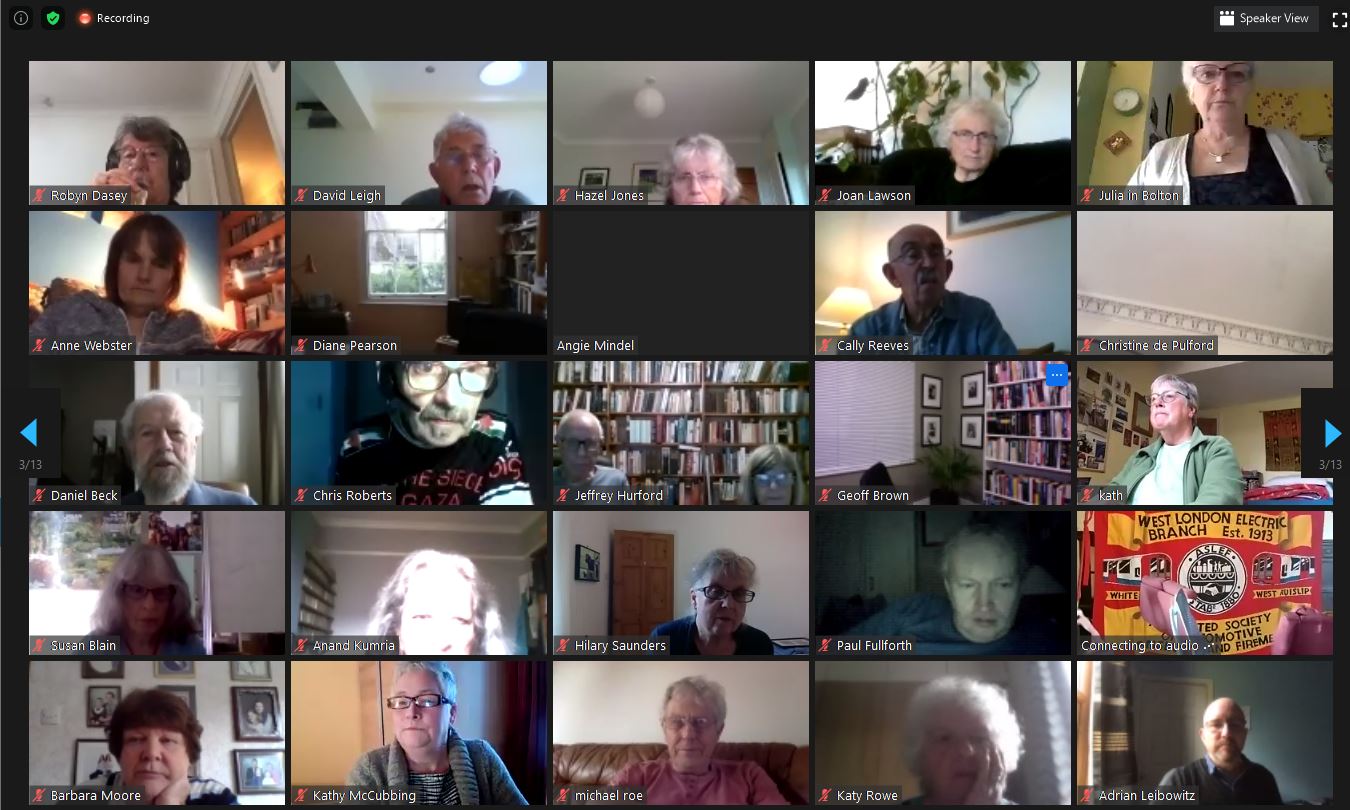 They claimed over 1000 people watching, which is a bit silly when these online apps give an accurate headcount. There were roughly 430 on Zoom and 50 on Facebook. What made it even sadder is that every Zionist activist I know was in the crowd too. What was also clear was the demographic of the online viewers. One of the cases that I have been making for years is that ‘PSC’ people are mainly older, majority female and very white. For most of these sad individuals ‘Palestine’ is the cause they picked up as they would a bridge or chess club. Something that gets them out of the house to meet people at a local coffee evening.

Their online weakness was also exposed. During the event they ran two ‘online’ campaigns using #hashtags. #endthesiege and #stoparmingisrael. They both only received a few dozen tweets and almost all of these were a direct copy and paste comment from empty trolls. The same type of thing we see coming from online Gazan troll factories. This exact comment, word for word, made up over 90% of the tweets made:

There was almost no original input whatsoever.

It is time to undress the toxic BBC

Far more worrying is what is taking place elsewhere. Yesterday the news broke that a senior BBC journalist had been running an antisemitic sock account. Nimesh Thaker used the Twitter account ‘Not That Bothered‘ to belittle antisemitism and  promote posts by people such as Jackie Walker and Kerry-Anne Mendoza. The account was also used to ‘support attacks on the organisation’s Jewish presenter Emma Barnett after she spoke out about the personal impact of antisemitism on her life’. By the time I went looking, the journalist appeared to have completely disabled all his social media accounts.

The horror of this should not be understated. This news brutally exposes the mindset we know exists at the BBC – childish, supremacist and Jew-baiting. For years we have complained about the bias and clearly distorted reporting taking place. We don’t need to wonder anymore about why the fringe group JVL were so often given BBC airtime. People like Thaker write the news that millions of people read each day. They’ve been doing so for decades. Nothing in the UK bears more responsibility for the spread of the false anti-Israel narrative than the BBC.

I have never been of the ‘defundthebbc’ bloc, but I am finding it harder and harder to justify that stance. I used to argue it needed reform rather than a complete rebuild, but I no longer oppose those that think the entire structure should be taken down. Pay the license fee – why on earth should I pay for this. BBC journalists have become antisemitic trolls. How do you repair that?

Bristol academic David Miller has been in the news. This academic has been causing trouble for years. Miller was recently suspended by the Labour Party and has been described as a ‘conspiracy theorist‘. Miller has an obsession with ‘Zionist’ money and power. I remember having a run in with him in 2015, when complaints were made about the research of anti-Israel activist Hilary Aked. The complaints were dismissed. Her supervisor at Bath was none other than David Miller.

This linkage needs to be understood. It is certainly were the next real battle must be fought. Academic David Miller is an activist and a troublemaker, just like other academics in Warwick, Exeter, Soas and so on. But each professor who is distorting history or fixating on ‘Zionism’ may also be supervising PhD candidates. Just like Hilary Aked. How many problematic academics has David Miller helped to shape?

In this way those such as Ilan Pappe at Exeter, David Miller at Bristol and Laleh Khalili at QMul become far more troublesome than the sum of their collective output. Each academic produces ‘academic babies’.

Take James Eastwood who tells racist lies about Israel at academic conferences. His supervisor was Khalili. How many ‘Eastwoods’ has Khalili produced? This is an exponential problem and one that we need to get to grips with if we are to contain and fight it. Our campuses are becoming antisemitic environments as much through the activity of the academics, as the students. I have this bookmarked as a major project for 2021. If you want to help financially or logistically – you can donate to the research or get in touch to help me.

Events at Trafalgar Square over the weekend, quickly exposed the toxic sewer of extremism in which terms such as ‘right’ and ‘left’ no longer make sense. On Saturday there was an ‘anti-lockdown’ protest in Trafalgar Square. A demonstration of people, many of whom think Coronavirus is a global conspiracy that seeks to control us, and the potential vaccine will contain some type of poison or computer code. Unsurprisingly, the lizard-man David Icke was the keynote speaker. A British Union of Fascist’s flag was seen at the event. It soon became painted as a ‘far-right’ protest.

Little does more damage to the fight against extremism than lazily calling the ‘Nazis’ and ‘fascists’ far-right. Nationalism is not the opposite of socialism, conservatism is – capitalist thought and opposition to change. For years I have been researching extremists in the sewers. The extremist ideologies all tout to the same type of people – the disenfranchised, anti-establishment, anarchists and revolutionaries. Some are flag wavers, some are not but they are not opposites of each other. The disenfranchised fascist does not stand opposed to investment in the NHS, education, state ownership and housing for all. The opposite of all these people, flag wavers or not, is the ‘establishment’. In the revolutionary sewer anti-establishment rhetoric and conspiracy flourishes. None of it is ideologically pure because none of it makes sense. I have seen white supremacists, radical Islamists and Marxists all break bread together as they plot the downfall of the ‘Zionist’ run world.

They are competitors within the same sewer. Toxic offshoots of the same branch. They are not polar opposites. In this world, ‘right’ and ‘left’ are relative only within their own paradigm.

But we live in a world where ‘left’ has come to mean ‘progressive’ ‘peaceful’ and ‘ethical’ and ‘right’ has come to mean uncaring and racist and ‘violent’. ‘Right-wing’ is seen as a slur and for many this is the way the political spectrum has become defined. So if something is violent or racist, it must be ‘right wing’. Thus, a demonstration in which a few fascists gather, was clearly a ‘right wing’ demonstration.

The event was put together by Corbynistas. The key organisers were the brother of Jeremy Corbyn and a Labour activist called Louise May Creffield from Brighton. 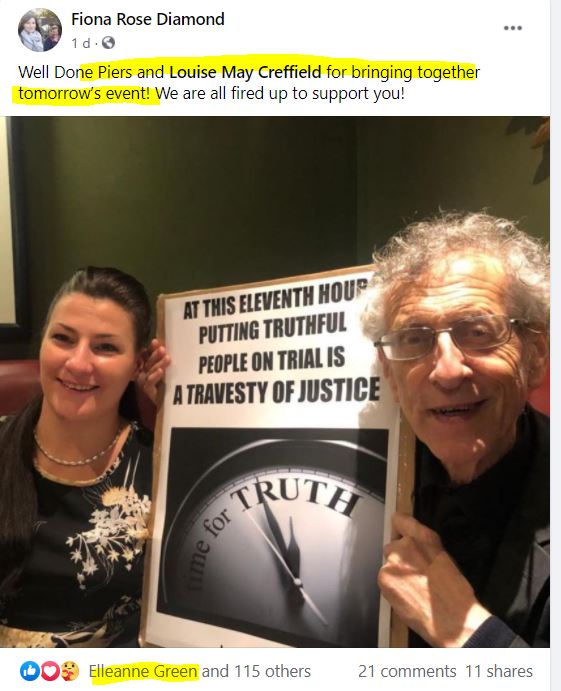 And the antisemitic anti-Israel extremists like Elleanne Green were also present with their Palestinian flags. 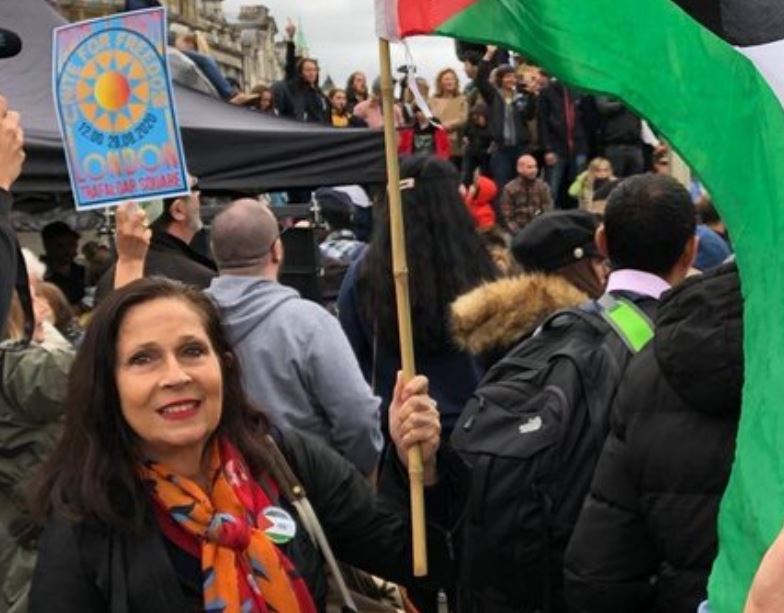 As was Simon Hindmarsh from Labour against the Witchhunt. 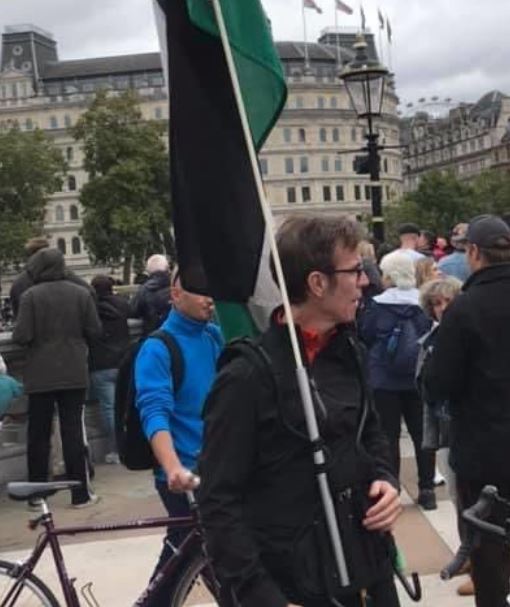 From an online PSC meeting through academia and the media to demonstrations in the street. Haters will always hate. It is our job to be vigilant, determined. And to fight and expose them.

453 thoughts on “Toxic. BBC journalists as antisemitic trolls and the battle for academia”