As someone who deals with the world of antisemitism frequently, I attack ideas and groups far more than I do individuals. My fight isn’t against people, and if through education, someone who harbours antisemitic views, can be shown the ‘racism’ inherent in their world vision – if we can adjust the lens they view through – then that person is no longer part of the world of antisemitism. Our fight has to be one of ideas – fighting a disease that feeds on ignorance.

Last month, in a podcast about ‘Grime Artists’ – (I hope that writes as if I know what I am talking about – because I don’t have a clue)- BBC ‘star’ Reggie Yates made a comment about a ‘fat Jewish guy from North West London’. He swiftly apologised for the remark, describing it as ‘flippant’. I don’t know him, but if he is a good guy, if it is a one-off mistake, then he apologised and we should leave it.

Since then, he has stood down from hosting the Christmas Top of the Pops episodes- which is a shame. It is probably a ‘big gig’, and his career is being tainted.

This isn’t just about antisemitism. In my mind, nobody deserves to have their life path changed because of a single comment. The world we live in is so full of minefields, with its tendency to seek political correctness in every corner, that today institutions are forever running scared of a social media backlash.

In our fight against antisemitism – and there are many hard-core antisemites to be fought – the battle shouldn’t be about vindictiveness, or revenge, for every comment that is made. It is far better to identify those that can be educated – or are even unaware of the problematic nature of specific tropes – deal with them – and swiftly move on to those that really wish us harm. It isn’t as if there is a shortage of those targets.

And then there is Kelechi Okafor. Kelechi is someone who defines her role as ‘anti-racist’. Okafor also made a podcast (available here), and began to discuss the comments made by Yates. Like me, Okafor seemed to be upset that Yates had left the Top of the Pops gig. However, Okafor’s podcast swiftly descends into an antisemitic rant, dealing with the ‘power’ of the Jewish community:

‘I don’t think what Reggie Yates said is problematic. He is saying the truth. And it just goes to show the power of a specific community, that he can make a comment like that and everyone’s like ‘woh – no’- pull him off Top of the Pops. Why? Aren’t these Jewish managers not from North West London? I just want to know where the fallacy is, where did he make a statement that is not true. … black people in the entertainment industry have been short-changed so much by the kind of people that Reggie Yates describes’ – why are we not saying it as a form of truth?’

She even had time to complain about Holocaust Memorial Day, reference Harvey Weinstein, tie it back to Jewish power, and then throw a Shylock reference in for good measure.

Even ignoring the antisemitic content, her podcast was deeply unsettling on a number of levels. There was this comment:

‘and yes, stereotypes are based on an element of truth’

This doesn’t just reinforce her own antisemitic comment. It is a horrific statement for an anti-racist campaigner to make. What if someone said this about people who are black? In fact her attitude towards those who make or have made racist comments is also unforgiving and deeply personal. For her it seems it is all about the man and not the message:

‘I have a huge problem with people apologising for things that they meant to do. Like, a lot of times, a lot of non-black people making flagrant remarks about blackness and about black people and five minutes later, one publicist has convinced them to re-post this apology or regurgitate this well manicured apology. And I just think it sucks. At the end of the day – if you said it, you said it with your entire esophagus, you said it with your entire trachea, you said YES, this is my view and this is what I meant to say. Why are you retracting it? Say it with all of your chest, say it with all of your torso, if you mean to say it – say it. I am still going to cast you out, I am still going to think you are a terrible human being, but at least you said what you meant’

This view suggests racism is inherent, cannot be educated against or addressed. It stands against everything I believe, and any anti-racist should oppose the underlying person-as-racist message it contains. Don’t people sometimes make mistakes – can’t we put knowledge in place of ignorance? Can’t we educate?

After hearing the podcast, and as someone who respected Okafor’s anti-racist position, Jewish Chronicle Social Affairs reporter Rosa Doherty had contacted Okafor privately, perhaps to simply ‘educate’ with a quiet word. Even pointing out in the email that she was not approaching her as a reporter looking for a story.

Okafor’s response was swift. She turned to Twitter and publicly went on the attack, asking what the Jewish Chronicle does to tackle ‘anti-blackness’:

Putting aside her ignorance of Jewish activity in civil rights movements, her response is ridiculous. What the Jewish Chronicle does or does not do, isn’t an excuse for her own racist comments.

As the story began to gain circulation online, someone left a bad review of her business at a review site. (I am not linking it here, because I do not stand with personal attacks, nor seek to enable them).  Okafor’s response:

Here she is hiding behind the issue of anti-blackness, as if somehow, Rosa’s attempt to contact Kelechi over antisemitic remarks is all about anti-black racism.  This isn’t a new strategy- on her Facebook profile, she recently related a story over an argument that developed between herself and a theatre. This an extract: 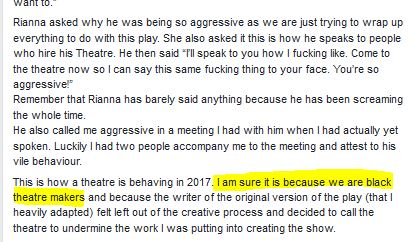 Notice how the incident had to be ‘because she was black’. It couldn’t be that the man was having a bad day or is aggressive by nature, nor that he is simply a nasty man. It has to have a racist motive. So too her response to the entire podcast episode. Her response to my tweet on the issue was simple:

This type of ignorance is difficult to deal with, because it comes inbuilt with a ‘don’t apologise’ mechanism, is self-justifying, and reinforces the very world vision that creates it. Okafor probably thinks she is under attack now by ‘Jewish power’, for speaking the truth about ‘Jewish power’. In reality Okafor is at a crossroads. She needs to decide whether she is really standing up against racism, or whether she is comfortable being a racist herself.