I am back down in Brighton for the Labour Party Conference. Credit were it is due – this is a very different conference from the ones I attended when Corbyn was leader. But it is also true that if you scratch the surface there are signs of serious trouble ahead. And as a reminder of how toxic the party can still be – I was thrown out of a Jewish Voice for Labour event (again!).

Here is the story:

Inside the party conference venue

Walking through the exhibition halls it was immediately clear that things have changed. Last time, ‘Palestine’ was everywhere, and every other stand had posters, flags, badges and leaflets declaring their solidarity. This year, even the ever-reliable Morning Star stand didn’t hold any ‘pro-Palestinian’ material. Outside of the Palestine Solidarity Campaign stand – there was nothing to see anywhere. In another good sign, the Labour Friends of Israel stand was back too – and the people manning the pro-Israel stall reported that they had experienced many positive conversations.

In both 2017 and 2019, over half the delegates wore PSC lanyards, and there were runners scouting the halls and handing them out to everyone they could. This year,the PSC stall was quiet. A lone and bored-looking volunteer sat waiting for someone, anyone to show an interest. The lanyards did start to appear though – and when I asked a few delegates where they got them from they all said the same- they had been given them outside the venue. So I went outside to take a look at what was happening.

Given how many members of the toxic Jewish Voice for Labour have been suspended, it made sense that they would be doing their work on delegates from outside the venue. After all, a lot of them could not get inside. Just the night before, their co-Chair Leah Levane had been expelled from the party – and when she turned up to go to the conference she was refused entry to the event.

So JVL were out in force, with leaflets and posters telling everyone what victims they are. 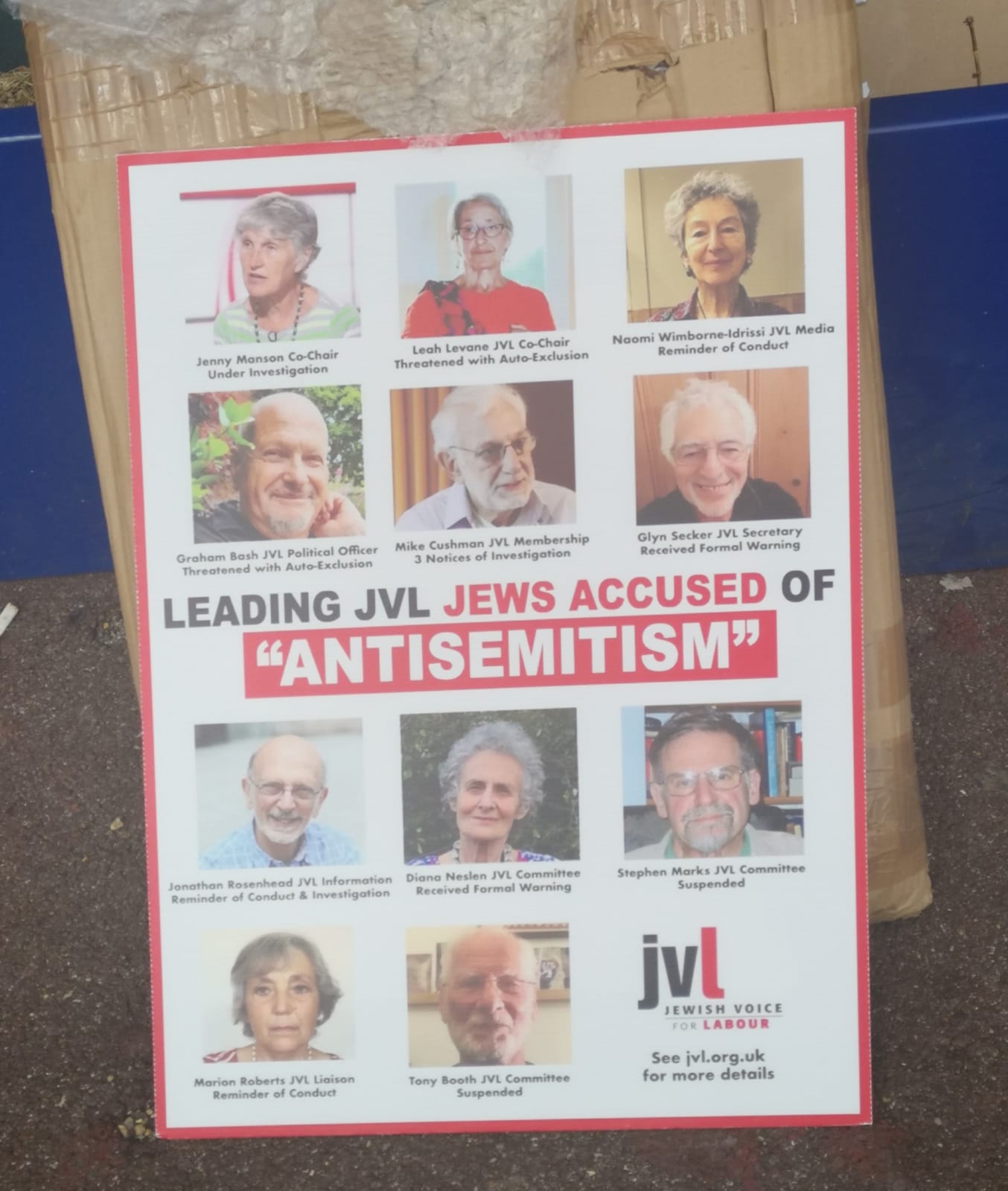 It is sickening to watch these people go from delegate to delegate, poisoning the minds of others. I even saw Carol Foster, who was an admin of Palestine Live and had written a vicious antisemitic poem about the ‘Jewish Lobby’ – walking around telling Labour members that she and her friends were being targeted for no reason.

The PSC lanyard people were outside the venue too – looking for those who would stand in solidarity with them: 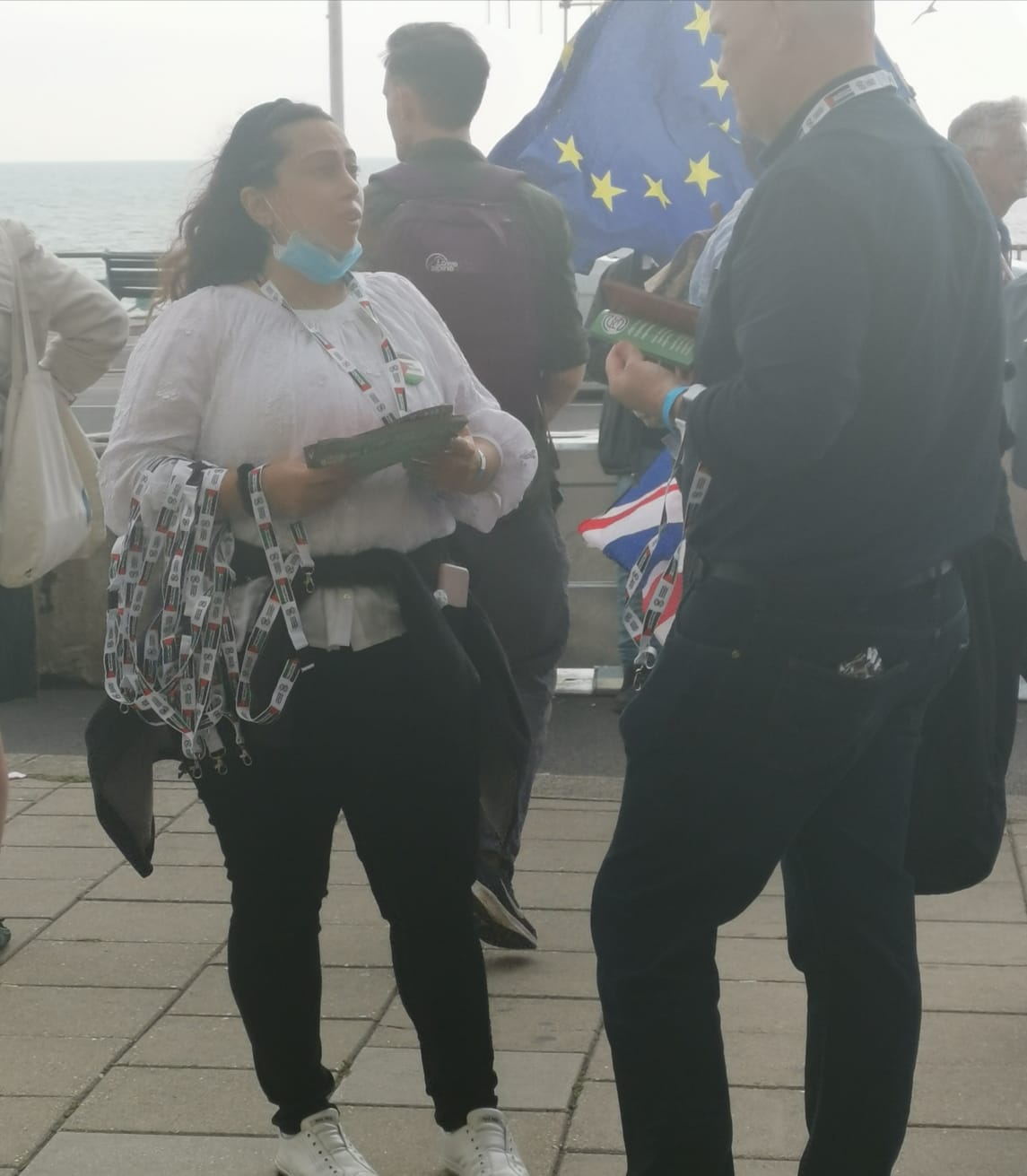 I watched this crowd for a while and then went back inside – there were debates on two constitutional votes that I needed to sit through.

The first vote at the party conference

The first debate was on the adoption of constitutional laws to adhere to EHRC rulings following the damning report which had concluded the Labour Party acted unlawfully. There was not really much choice in this but the vote still had to pass. It was clear from the debate that this was going to receive a large majority. Jewish members spoke and received ovations – other members came out in solidarity. Very few dissented.

When one woman shouted out about ‘Palestine’ she was quickly silenced. When another raised the Palestinian flag they were told flags were not allowed in the conference hall. This was all million miles from the toxic atmosphere at the 2017 and 2019 events.

The second vote and a warning

The trouble here is that many of the people in the hall giving the Jewish members standing ovations – were also in the hall waving the Palestinian flag in 2019 or treating JVL as heroes in 2017. Many of these delegates are sheep, just leaning in the direction of the wind. At the moment that wind is blowing towards Keir Starmer.

Which is why, as welcome as it was to feel a different breeze in the hall, we cannot read too much into what we are witnessing. Yes there are some good signs – but there are bad signs also. Which brings me to the second vote.

Two sides of the same coin

The second debate was about a change to the leadership election process. Starmer wanted to change the system so as to make another Corbyn style takeover much more difficult.

This debate was different. Speaker after speaker took to the stand and this was a different breed. Most signalled their opposition to the changes. There was one who did it in a Corbyn t-shirt. Another had a JVL badge. Most had PSC lanyards.

Starmer won this vote too – but only just – with 52% of the vote. These delegates may have been forced to give up on the EHRC battle – but they were not willing to so easily surrender their hope for another Corbyn style project in the future.

It was an odd spectacle because the same ethical force drove both debates. On the one hand the floor roundly stood with their Jewish colleagues who had been so badly treated. On the other many refused to rule out repeating the exercise That contradiction is a sign of how much trouble the party is still in.

Kicked out of the JVL event (again!) at the party conference

After the vote I headed down to a Jewish Voice For Labour Event but I didn’t even make it through the door. As I arrived I met Theo Usherwood from LBC, who told me he had just been assualted by Tony Greenstein and evicted from the event. Glyn Secker appeared – the Secretary of JVL – and promptly told me to leave the building. They eventually allowed Theo back into the event – but Secker stood his ground with me and told me to leave. I informed him that I knew he had people expelled from the party at the event – he simply said ‘he knew’.

And here is the key issue. This event was an official ‘Fringe’ event. It is listed in the official Party Conference catalogue. Under the event description it explicitly states that a conference pass was needed to gain entry: 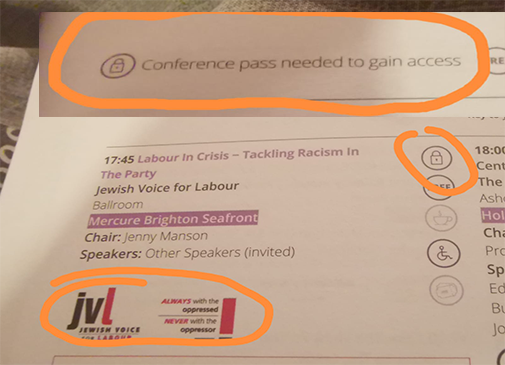 This makes what happened to me – the direct fault of Starmer and the Labour Party. How did expelled or disgraced members gain access to an event that was closed to just those with Conference passes? Tony Greenstein was there. Jackie Walker too. And several others.  And it is not like they sneaked in and hid at the back, both of these disgraced ex-Labour members played a role in the event and were given a platform to speak:

The Labour Party once again placed Jews in harms way by legitmising and advertising the JVL event. We are well past the time for discussion. This is a toxic group of antisemites who joined the party to cause trouble and pose a threat to the majority of Jewish Labour Party members. JVL must be proscribed and all its members thrown out.

This is not one party

The reason danger still lies ahead for us all is because the current Labour Party is not a single party – it is two. A Corbyn type extremist can lead – and he will bring in swarms from the toxic left and gain Islamist support, but the red wall will always crumble around him. The more traditional Labour voters will simply not identify with such a party.

Or the membership can opt for moderation, trying to woo back the traditional support. But the only way to do this is to alienate the far left and the Islamists. We are currently on such a curve. Yet this is not enough to win an election either and there is no way to tie the two groups together. These are two separate parties.

Which means the hard-left can take the party once more – and this is why the battle over the second vote was far more serious. The toxic left know they lost the battle on antisemitism and they need to regroup. What they didn’t want to do was lose the second vote, which would make such a rebirth much harder to do.

So as good as some of the news is – those who are rejoicing are overstating the win at the Labour Party Conference. Keir Starmer’s ‘closed door‘ comment was embarrassingly premature. Unless Starmer dissects his own party, this is no more than a ‘Hudna‘ – a strategic ‘time-out’. Many of those that took the Labour Party into the gutter are still there – and that is something that should give all those who are rejoicing much to worry about.

I battle back against those who seek to revise history and expose antisemitism. I fight when others don’t.  Please help If you can, please consider making a donation.