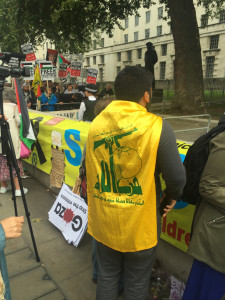 Recent events within the Palestine Solidarity Campaign (PSC) suggest that the movement is losing the fight to keep its internal extremists at bay and has begun a descent towards civil war that may see the movement entirely overrun by antisemites and supporters of terror organisations.

The PSC was formed in 1982 in the UK. It has been referenced as the major proponent in the UK, of the Boycott Divestment Sanctions (BDS) movement against Israel. The Facebook page has 461,000 likes, and the movement lists over 60 regional branches on its website.

As is the case with the Palestinians themselves, there are many faces to the Palestine Solidarity Campaign. There is the moderate, accommodating, peaceful face they use as they seek to enlist political or public support for the boycott campaign, there are the more radical elements they unleash to cower the pro-Israeli voice in universities and then there are those supporters that they must keep supressed, those that maintain positions entirely unacceptable in UK society.

Many of the 461,000 likes it has received on Facebook come from well-intentioned people, who have some sympathy for the Palestinians and have been moved to register their affiliation by a never ending stream of purposefully disseminated images that reach their social media accounts. Yet these people do not reflect the movement that they align themselves with; in fact, they are the farthest thing from it.

Last summer, following the Counter-Terrorism and Security Act 2015, the government updated its PREVENT duty guidance. Mainly directed towards schools and universities, it was a response to the radicalisation of British youth, at home, in educational institutions and online. With young people having such easy access to an ideology that suggests democracy and basic British values are something to be rejected, a ‘duty’ has been placed onto those who care for our children’s education. It is a safeguard issue, just as we would expect our educators to notice visible signs of other forms of abuse. It takes a rather extreme position to actively want to oppose the PREVENT guidance on ideological grounds. 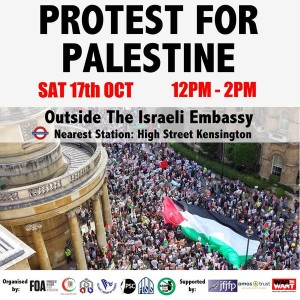 In October, the PSC were one of the major organisers behind a ‘Protest for Palestine’ event outside the Israeli embassy in Kensington.  News soon spread that at the event, emblems and flags of both the Hezbollah and Hamas had been displayed. Several people were arrested. The event itself had taken place against the backdrop of the latest surge in violence and in protest at the way Israelis were defending themselves against the terror attacks. The demonstration therefore was a visible salute to the terror groups. Despite this, PSC Director Sarah Colborne said at the time that the movement had specifically asked that only “Palestinian national flags would be welcome at the protest”.

As Director of the PSC, Sarah Colborne was well aware of the fine line between the acceptable and the unacceptable, and several times in the past had moved to publicly distance the movement from extremists that would highlight the ‘under-the-surface’ connection between support for the Palestinians and both support for terrorist groups and virulent antisemitism. Here are two other examples:

Colborne made comments spanning several years, explicitly distancing the movement from Gilad Atzmon because of his antisemitic statements.

When during the summer at another PSC event, vicious antisemitic statements were caught on camera (see here and here), the PSC moved swiftly to publicly condemn the antisemitism that had been witnessed at the event.

But antisemitism is the swamp fever of the pro-Palestinian movements and many of those that align themselves with anti-Israeli causes also identify with terror groups such as Hamas or Hezbollah. When the illogical hatred of all things ‘Israel’ consumes every essence of rational thought, those that kill Israelis, no matter how vile, illegal and destructive, become symbols of ‘justifiable resistance’ that can be admired. It doesn’t have to make sense, there are too many examples around us to ignore the truth. How decent minded left wing ‘humanists’ can stand alongside these people is something only future research will be able to uncover. What is for certain is that Sarah Colborne was sitting on top of a pressure cooker made up of antisemites and terrorist sympathisers.

Immediately following the event and the arrests, ‘noises’ began to be heard from the extremist camp. In a clear signal that something was amiss within the PSC, Tony Greenstein ran a blog suggesting the PSC may have aided “the Police in harassment of Palestine Activists”. The blog itself is Tony’s usual diatribe, but it displays an emerging pattern of thought that Colborne, because of her efforts to keep both antisemites and extremists at arm’s length, was a ‘traitor’ to the cause.

It is worthwhile at this point to recall PREVENT, because Hamas and Hezbollah (military wing) are both proscribed terrorist organisations in the UK. As such, there can be little doubt that supporters of such movements, groups that commit acts of terror not unlike those witnessed recently in Paris, stand against both British values and our system of democracy. All Sarah Colborne had apparently done, was ask that these groups not be publicly glorified. Why does Tony Greenstein, and from the comments in Tony’s blog, also Illan Pappe, have a problem with the request to lower the flag of Hezbollah in London? The answer of course is that Tony doesn’t consider Hezbollah or Hamas terror groups, nor it seems do many of the PSC supporters, because within 6 weeks of the event, Colborne had gone, ousted from the Palestine Solidarity Campaign. The announcement of Colborne’s departure was made quickly and quietly on December 10th. No reasons were given.

Shortly before this in November, the Co-op bank, in yet another sign that the PSC is a group in trouble, closed various bank accounts connected to the movement. It seems as if the mask was slipping more quickly that any one person could set it back in place. Then in almost a direct response to Colborne’s departure, the PSC in Brighton publicly affiliated with the ‘Together Against Prevent’ movement which opposes entirely the anti-radicalisation PREVENT strategy. Other signatures on the Together Against Prevent website include the ‘Islamic Human Rights Commission’, ‘London Palestine Action’ and ‘Stop the War coalition Scotland’. A day later, on Dec 29th Gilad Atzmon wrote a blog about Colborne titled ‘A Solidarity Campaigner Or A Traitor‘ suggesting that he had heard the Director of the PSC ‘had to go’, because she ‘collaborated with police’. Atzmon went on to describe Colborne’s anti-racist stance as a “sound-bite outburst of diarrhoea”. Atzmon finished by posting a copy of a letter from the Islamic Human Right Commission (IHRC) to the PSC that suggests collaboration with the British police is cause for instant resignation. Note that the IHRC are also one of the signatures on the ‘Together Against Prevent’ petition. 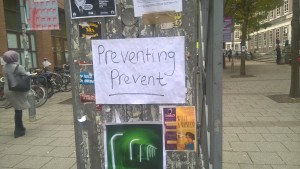 There is little doubt that all these events are connected. From the antisemitic and extremist outbursts at the summer demonstration, the waving of the emblems of Hamas and Hezbollah, the closure of the Co-op accounts, the opposition to PREVENT and the internal conflict that led to Colborne’s departure. The clear messages by Atzmon, the IHRC and Greenstein suggest government opposition to radicalisation and extremism are now in direct conflict with the powers that be in the PSC. Colborne was no friend of mine, but it seems clear that the moderating forces in the PSC are losing out and the extremists are taking over the asylum. If the people who want to wave Hamas and Hezbollah flags have forced out the person who opposed it, if the antisemites are calling her a traitor, then we have a clear indication of what is now in control of the PSC.

PREVENT is a necessary tool in the fight against radicalisation. It is vital that movements that are on the fringe, those that know they have members who cross the line, should be those most eager to engage the police and ensure they themselves are not party to any radicalisation process. It is no coincidence that the places named and shamed as giving a stage to radical extremists, such as SOAS, are amongst those who are most vocal in their opposition to PREVENT. The PSC has now given a clear message of opposition to an initiative intent on stopping the breeding of terrorists on British soil. It also seems that helping the British police maintain the law, is a matter for instant dismissal at the PSC. This isn’t a movement that identifies with peace, but rather with the enemies of freedom and justice and democracy. Those that support this movement should draw the obvious conclusions. Those that monitor radicalisation and extremism should follow suit.