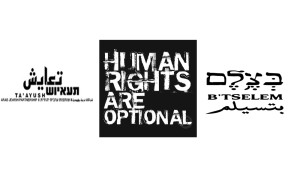 A few days ago, an Israeli investigative TV show (UVDA – ‘fact’) ran an expose that involved an Israeli infiltrating Ta’ayush, a NGO that promotes itself as ‘a grassroots movement of Arabs and Jews working to break down the walls of racism and segregation.’ The Israeli also encountered Nasser Nawajah, a member of B’tselem. These two NGO’s are cited as leading ‘human rights organisations’ whose self-stated purpose is highlighting alleged human rights abuse. Very few, if any, of the organised tours that set out to sell ‘the brutal Israel’ narrative do not involve engaging one or both of these movements.

The operation itself was simple, and involved riding with Ezra Nawi, an Israeli Jew and well known ‘peace activist’ from Ta’ayush, as he went about his daily business. The Israeli, using the pseudonym ‘Arik’, went on to capture on camera that these activists, senior members of B’tselem and Ta’ayush, have been informing on Arabs who wish to sell land to Jews. Nawi was recorded boasting that the Palestinian security forces would torture and execute those Palestinian land brokers and ‘take care’ of the Palestinian families willing to sell their land.

In itself, the action only highlighted what is already obvious, that some, if not many of the volunteers of the NGO’s operating in this area, are not ‘peace activists’ at all, but rather hate driven ideologues, who have taken sides in a difficult and complex situation. Their interference, rather than assisting, means many of these NGO’s have become an intractable and indivisible part of the conflict itself, perpetuating myths, spreading disinformation, feeding the anger and in turn, leading to more, rather than less violence.

The case seems pretty clear cut. An activist from Ta’ayush was approached by a Palestinian in the hope he will find Jewish buyers for a land owner that wanted to sell. Rather than follow through, Ezra Nawi contacts Nasser Nawajah, a friend in B’tselem to discuss what would be needed to hand this man over to the Palestinian security services. There are not many ways of looking at this, it is like someone from Amnesty International conspiring to trap an individual and then hand him over to the Chinese authorities, knowing what the Chinese do to those that oppose them. Any right minded individual would instantly condemn the action and no true peace activist would engage in them or protect those that do. But that is not what is happening with this latest event at all.

As soon as the show was broadcast, the backlash started. On the programme itself, Illana Dayan, the shows anchor, had invited Gideon Levy, a frequent commentator on human rights to respond, and rather surprisingly, Levy’s main concern seemed to be that the show had been broadcast at all. Levy has since written an article in Haaretz saying that the show ‘should be ashamed of the report it aired which depicted human rights activists as dangerous, while ignoring the occupation.’ Rather incredibly, Levy begins to suggest the entire piece is taken out of context and ending in rather dramatic and ironic fashion, he suggests that by highlighting these actions to the world, the show has done a disservice. Here is Gideon Levy publicly claiming that some people assisting human rights abuses should not be put on TV.

And Gideon Levy is far from alone. 972 Magazine, an online outlet that spends its entire existence knocking Israel and talking up human rights, suddenly becomes blind to actions that clearly contravene the UN’S Universal Declaration of Human Rights. Today (10/1) they ran a piece by Haggai Matar, attacking those who publicised the actions of the activists. Suddenly, when analysing the words of a man who seemed to be rejoicing at the violent fate that would befall the land seller, there is a ‘but’ and an ‘however’. Incredibly, the criticism is reserved for the source of the recording, rather than the men who conspired to perhaps have someone killed. It seems that for these left wing ‘moralist thinkers’ that when it comes to human rights, some people’s rights are more important than others.

These are not the only two examples. Ever since the broadcast, the show has been attacked endlessly from sources desperate to protect the image of the NGO’s, movements that propose their very raison d’être is to protect human rights. But it isn’t just those making noise that we should focus on, it is those remaining quiet. Groups who describe themselves as being on the far left of the political spectrum, those that frequently hide behind or use the material provided by these NGO’s have temporarily stopped posting and tweeting. They have nothing to say. Media outlets like the Guardian and Independent, who would have been banging down the doors if the situation was reversed, are ducking under cover until the furore dies down. They do not want to attack ‘their own’.

This isn’t to suggest NGO’s do not have a part to play, or to maintain Israel should treat NGO activity as hostile by default. Given the situation between Israel and the Palestinians, NGO’s should in theory be a welcome ‘checks and balances’ system between two sides of disproportionate power. But something is clearly very wrong in the situation as it now exists, and many NGO’s operating in this conflict have ‘taken sides’, in some cases have been overrun by actual combatants and they have almost all lost any internal compass as to what it is they are truly meant to be doing.

We have always known this hypocrisy existed. We are well aware that these groups, these media outlets, these individuals, work in unison and are driven by personal bias and hatred towards Israel rather than a true sympathy for the Palestinians. It would have been nice to see one, just one, stand up and give the unequivocal condemnation they always demand of others. Instead we are left with those attacking the messenger, weak attempts at diverting focus and an entire part of the political spectrum simply disappearing for a while. No, this is not a surprise, but it is solid evidence that the hatred we see directed towards Israel every day, is simply that, blind hatred. Hatred that emanates from a bunch of very vocal but equally morally deficient hypocrites. It is worth remembering that next time you see one of their reports.