Over the last few weeks Rosa Doherty from the Jewish Chronicle has spoken to several campaigners fighting antisemitism about the impact that struggling against anti-Jewish hate was having on their mental health. Yesterday, the Jewish Chronicle published three articles. The first contained a few case studies. The second featured some comments from mental health experts, taking a wider look at the impact anti-Jewish hatred was having on the community. The third was about lessons the Jewish community can learn about how to deal with these issues.

I don’t shy away from anything and remain fully aware that you cannot possibly face a tsunami of hate and abuse without it having an effect. I was more than willing to open up to Rosa to discuss the personal cost of fighting antisemitism. Others did too. Sara Gibbs spoke of ‘tearful nights, nights feeling disbelieved, ignored and alienated’. Miriam Mirwitch, chair of the Young Labour movement, did open up but also spoke of her reluctance to discuss the issue so as not to show weakness. Which in itself says much about the cost people are being forced to pay. Emma Feltham, probably the most notable non-Jewish face of grassroots activism against antisemitism, felt ‘forced’ to see a doctor because of mental health issues surrounding this fight. Like most who publicly defend Jewish people, Emma has also required help from both the CST and the police.

Rosa spoke to a handful, I know dozens. Behind the scenes a massive self-support network has opened up amongst activists. And what about the more public figures? Like Rachel Riley or Tracy Ann Oberman. All these brave female fighters have the added ingredient of misogyny to deal with too.

It is possible to avoid the external confrontation – you can supress your identity and choose not to fight. You can even go further and conform, by publicly attacking Zionism. Or if you don’t want to go full on ‘anti-Zionist’, you can at least frequently seek reasons to berate Israel. In doing this you add a protective veneer and if the issue surfaces – you can point and claim you have all the virtue signalling markings of a ‘good-Jew’. But these are external superficial elements – inside, notions of self-doubt, self-loathing, feelings of vulnerability, anxiety and uncertainty will still take their toll. So this isn’t just about those Jews standing up and fighting – it is also about all those that aren’t.

According to the 2017 Labour Party Manifesto (page 73) ‘Mental ill-health is the biggest unaddressed health challenge of our age’. Corbyn explicitly referenced the importance of mental health at the Labour Party conference. Like most Labour Party positions, it does not seem to count if you are Jewish. After the article was released and with several Jewish people opening up about mental health issues, it was sadly inevitable that Corbyn’s posse would attack. There was ridicule, hate and even expressions of happiness at the suffering of others. Quite a bit of antisemitism too. Remember – this was a response to a discussion on mental health issues.

This is one example of what was posted on Twitter. It was tweeted by an account called ‘True Labour‘ to their 11,700 followers. At time of writing this piece, it had been retweeted 174 times and received 339 likes: 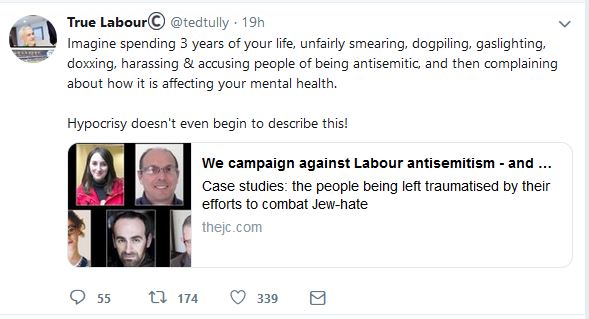 What followed in the chain were some truly disgusting comments:

The thread is all about Jews right? So look at this one. Jews must be rich? None of the people mentioned can have issues with poverty? Seriously what is it with these antisemites?

That wasn’t the only one. Eunice had this to say to his 8000 followers. We are apparently doing it all for money:

This tweet builds conspiracy into the mix. Not only do we all work for Mossad, but Israel – who I suspect are the alleged ‘paymasters’, are also responsible for the deaths of people in Yemen and Syria:

Then there are Jews and their ‘bribery’:

Many just pushed the antisemitic argument that we are all just lying. That it is a smear campaign and it is the lying that is affecting our mental health:

Some people even displayed happiness at the news others were suffering:

I am hardly one to understand irony, but Susan Simpson had this to say to her 6000 followers:

The odd thing about that tweet is that Susan’s account has been running since 2014 and she has made 88000 tweets. That is *eight times* the number I have, and she managed it in only half the time. Perhaps I am not the one who needs to get ‘a bloody life’. It seems when it comes to mental health, everyone is worth of consideration under Labour’s manifesto – unless of course you are Jewish.

These are not responses you would expect to see under an article detailing anxiety, depression and mental health issues. It is certainly difficult to call this an example of ‘kinder, gentler politics’. I want you to imagine this was not about Jewish people and antisemitism. You can fill in the empty space with any minority group or issue that you like. The outrage in Labour circles would be swift and absolute. Aynone attacking a minority in such a fashion, Labour activists would *rightly* identify all this as ‘Nazi’ speech. When it comes to Jewish people, Labour activists treat victims of abuse like the enemy. A group to be opposed, ridiculed and fought without empathy.

I spoke about to Rosa on the subject because the issues are real. There is no point denying that side-effects exist. Personally, I have faced down Saddam, Hezbullah, the Islamic Jihad and Hamas and it will take more than a few Corbynites to shake me or stop me from the necessary work that still lies ahead – but it doesn’t mean there are no moments of anxiety. They’ve doxed me, assaulted me, hacked my accounts, attacked my website, gone after my family and sent me untold abusive messages – and I remain fighting fit. Mainly because I am an old warrior with decades of experience, but also in part because I am open about it all.

Others are not so lucky or so open. This is having a real lasting impact on some and it is an important conversation. This isn’t just about a few activists – those standing on the front-line. Jewish people in the UK are nervous, anxious, self-doubting, feeling their core identity attacked and experiencing the ground shake beneath their feet. Parents are looking to their children, wondering just what the future holds here. These are unsettling times. Whilst Labour activists may laugh – the issues are real – and we need to be more open about them with each other.

Support the fight- against antisemitism and against the delegitimisation of Israel